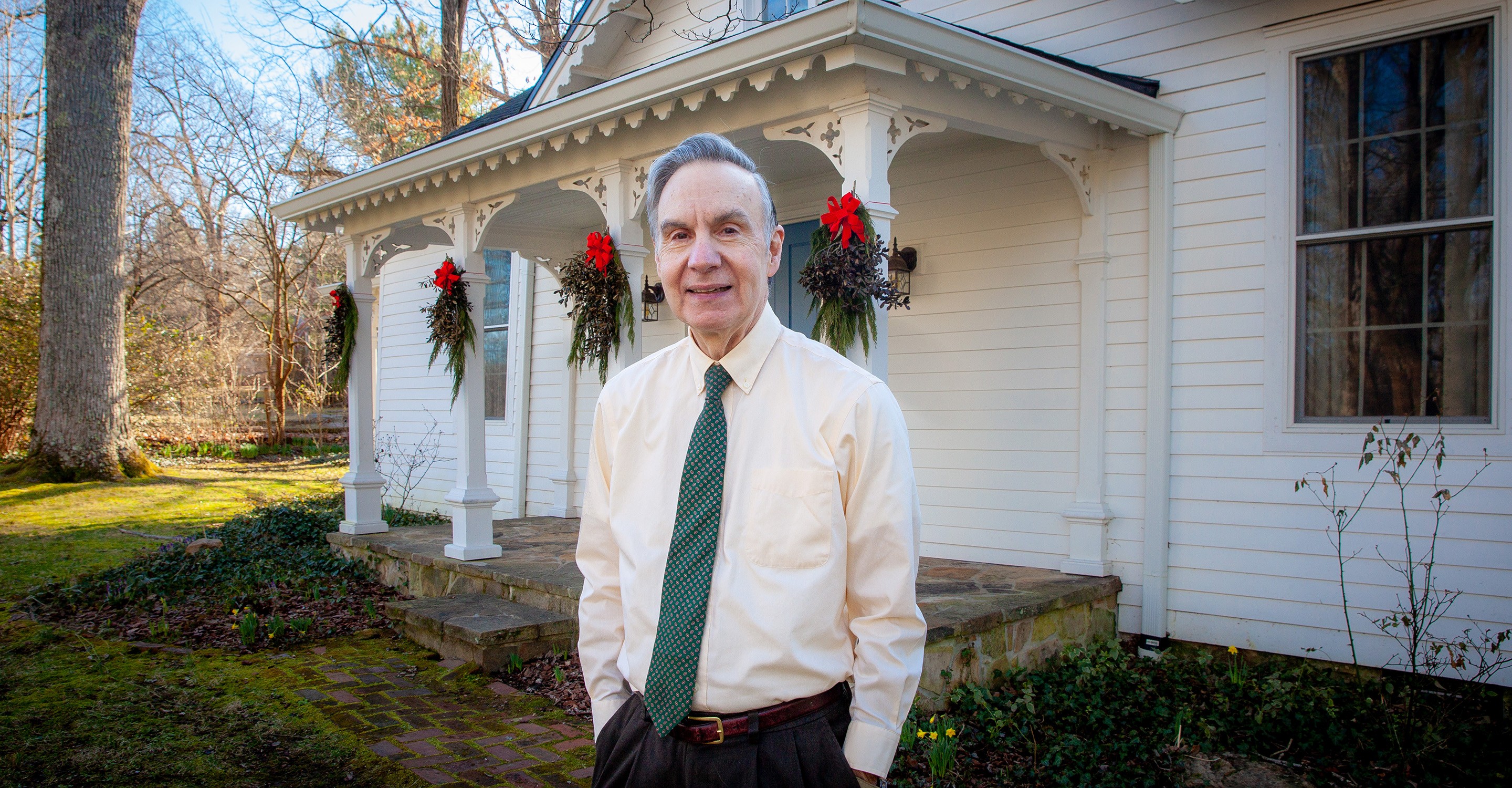 John Gatta at his home on Tennessee Avenue, built in 1871, in which he says he feels a connection to the lives that passed through it before his family arrived.
Photo by Buck Butler

In his latest book, an English professor and former dean of the College considers the spiritual experience of place in American literature and explores how a Sewanee program helps students find their place in a place—wherever that might be.

In his 1941 memoir Lanterns on the Levee, Sewanee alumnus William Alexander Percy famously wrote that Sewanee “... is so beautiful that people who have once been there always, one way or another, come back ... it is Arcadia—not the one that never used to be, but the one that many people always live in; only this one can be shared.”

It is this idea of a shared space that helps inform the University’s interdisciplinary Finding Your Place program, or FYP, which, since its start in 2013, has aimed not only to orient first-year students to their place on the Domain but also in the wider world.

In his latest book, Spirits of Place in American Literary Culture (Oxford University Press), John Gatta, the William R. Kenan Jr. Professor of English at Sewanee and an early faculty member in the FYP program, explores the role literal place has in an existential and spiritual experience of place. Through the works of authors like Wendell Berry and Barry Lopez, pillars of more traditional nature-based texts, and authors like Dorothy Day and James Baldwin, who bring a different notion of place-based spirituality to Manhattan and Harlem, respectively, Gatta weaves together literary criticism, theological inquiry, personal narrative, and pedagogy into a work not unlike the interdisciplinary aims of FYP.

Gatta, in an interesting and integrative twist, devotes the entire last chapter of Spirits to an analysis of site-based education, using FYP as a case study—its origins, course implementations, benefits, and liabilities.

In a book about place, it is ironic and fitting that Sewanee, the University and the town, becomes a primary character, serving as both the setting in which Gatta writes his book and the backdrop of a pedagogical analysis of place-based learning.

When Gatta, formerly a professor at the University of Connecticut, and his wife moved to Sewanee in 2004, in what he describes in Spirits as “the geographic shift that I found to be most unsettling at first, yet finally most rewarding,” they weren’t sure what to expect. As a born and raised New Englander, wooded, rural areas weren’t unfamiliar to him, but the American South was.

“As unreconstructed Yankees, we felt some apprehension about the displacement, if not culture shock, that our resettlement on the Cumberland Plateau—demonstrably part of the real South—might entail for us,” he writes. “Could we ever hope to belong there?”

It’s a question with ever-widening boundaries—from the environmental to the existential to the spiritual. How does place come to define a sense of self? How does place define a community? How does one find their place in a place?

Gatta, currently the interim director of Sewanee’s School of Letters, served as academic dean of the College of Arts and Sciences from 2007 to 2014 and played a role in the development of Finding Your Place. In the program, which kicks off before the official start of the fall semester, first-year students are offered the opportunity to experience the campus prior to the arrival of other students and to immediately immerse themselves in community-building and academic training. They are, in effect, finding their place.

Rooted in discovering a larger sense of place, FYP challenges these new students, many uprooted for the first time in their lives with their arrival at college, to experience lively classroom discussions among peers and faculty along with treks out into this new space and its surrounding areas to learn about who and what preceded them.

During Gatta’s time in FYP, which he outlines in Spirits, one of the ways this effort took shape was through assigning the autobiography of Ely Green, a young man who grew up in Sewanee in the early 20th century. Green endured significant adversity as a result of his birth outside of marriage and his biracial background. In his book, Green recounts hearing the voice of his mother, who had died when he was a child, as he lay against a rock at Morgan’s Steep. It is here, immersed in nature, that Green is able to find the quiet that ushers in the voice and direction of his deceased mother.

After reading Green, Gatta would take his students to Morgan’s Steep, a location mostly unchanged from how Green would have experienced it in his youth. There is time for reflection, an opportunity to connect their lives with Green’s, to lean into nature, and maybe most trying of all, to disconnect from the always-on digital world vying for their attention.

It’s one of the challenges of site-based learning, which asks students to pull their attention to where they are, not where the digital ecosystem wants them to be. While tech companies and social media platforms tout their abilities to create a more global community, bringing people closer together, there is also a sense that these devices are divisive, separating individuals from one another and separating individuals from the specificity of physical community and place. FYP’s place-based readings, discussions, and field trips are a respite for the student willing to engage with place in a different way—the old way, as it were.

“A relation to place is very much a part of a community in many cases. Taking a stroll out in the woods may be individual, but there is also a whole sense of being part of the extended community of life, the human community,” says Gatta. “At its most dramatic and eloquent, literature doesn’t only evoke place, it doesn’t only describe it, but it also helps to create it.”

Time collapses, worlds collide, a connection to place is formed.

At Gatta’s own home on Tennessee Avenue, built in 1871, he describes feeling a sense of connection to the lives that have passed through it before his family arrived. It has deepened his experience of their home.

But it’s an idea that can initially trip up incoming freshmen who hear “finding your place” as “finding my place,” without an understanding or examination of the lives who experienced this place before them.

“What does it mean to know a place, beyond superficial acknowledgement of the space it occupies?” writes Gatta. “[FYP] aims to locate that common ground of understanding where texts, places, and persons come together.”

It’s a leap some students won’t make, especially as the semester moves forward and the intensity of other academic and social responsibilities mounts. But many will. They will embrace the meditative exercises, the contemplative walks through nature, the excursions to archaeological sites, and the readings that deepen a sense of place even if that place is nothing like Sewanee, like Willa Cather’s Nebraska or Marilynne Robinson’s Iowa.

“I would hope that for students enrolled in my section of the course,” writes Gatta, “reflection on literary texts might become integral to the process of learning how to belong somewhere, or how, as [poet] Gary Snyder would put it, to become native to a place that may or may not have been the land of one’s birth.”

The reward of attention paid, acknowledgement given, and understanding sought might then, in fact, be finding your place after all.