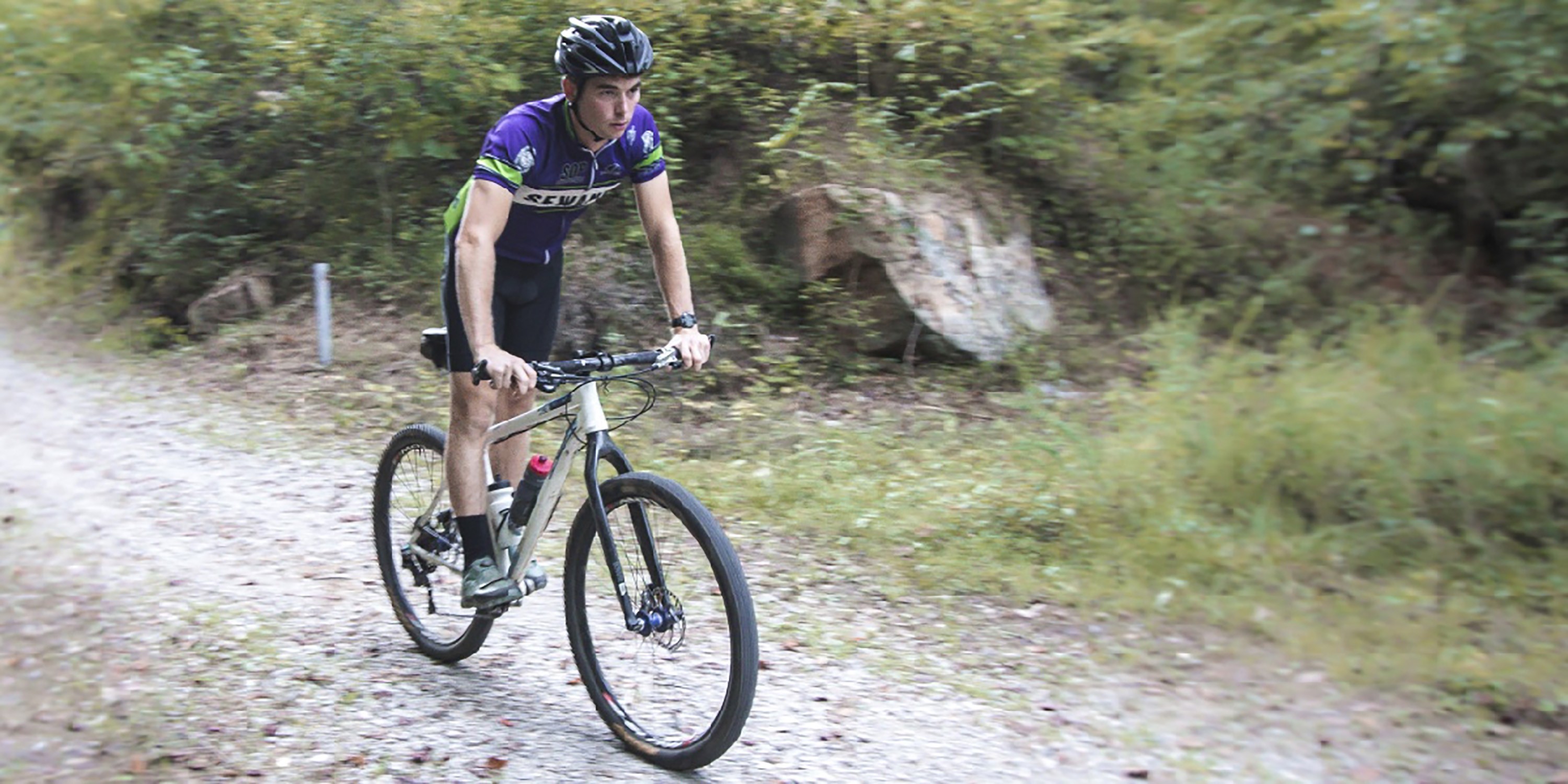 Before his record-breaking performance this summer, James Dunaway had ridden in the TNGA four times, including a first-place finish in 2016.
Photo by Meredith Garrett

46 HOURS ON THE TRAIL

James Dunaway, C’17, makes a record-breaking ride through the mountains of North Georgia.

Fueled by Pop-Tarts, PayDay bars, and a truckload of sheer grit, James Dunaway, C’17, was the first mountain biker to cross the finish line of the Trans North Georgia Adventure (TNGA) in August, coming in at a grueling 45 hours and 52 minutes. In this annual point-to-point ultra-endurance event, riders negotiate a 350-mile mostly unpaved route of abandoned jeep tracks and National Forest roads that sprawls through North Georgia from South Carolina to the Alabama line. Organizers insist it isn’t a race—there’s no podium and no prize—and only about 10% of riders view the ride as a competition. Most people just want to finish. Georgia native James Dunaway wanted to finish first.

“I guess I love the competitive nature of it,” says Dunaway. “It’s about seeing how long can you last until that breaking point and learning about your body in the process. I learned more about my body in those 46 hours than at most any other point in my life. It’s not fun in the process. I call it ‘Type 2 Fun.’ It’s fun once you’re done.”

In seventh grade, Dunaway confiscated his dad’s bike and began building jumps in friends’ backyards. When those homemade jumps were no longer enough for the thrill-seeking kid, he began exploring local trail systems. Pretty soon, his interest shifted from jumping to the terrain itself, and thus began his affinity for mountain biking, a sport that would ultimately take him to Sewanee.

Dunaway visited Sewanee for the first time during high school. He’d just finished a race in the Raccoon Mountain area near Chattanooga when his parents suggested a quick trip to Sewanee. A quick visit was all it took for him to be captivated by the University’s expansive Domain and its miles of trails.

“We dropped in to Woody’s Bicycles, and Woody immediately asked if I wanted to go out on the trails,” Dunaway says of his first experience on the Mountain. “I think that’s the day I decided to come to Sewanee. Then I worked at Woody’s my whole college career.”

In college, Dunaway was also an active participant in the Sewanee Outing Program (SOP), and today he remains close to many of the friends he made through the program. Whether riding the edge of the plateau on the Perimeter Trail or coasting down into the valley on their road bikes, Dunaway and the group of friends he met through the SOP formed bonds that transcend the outdoors. And they still have the matching jerseys to prove it.

One of those friends, Alex Butler, C’16, even rode the Trans North Georgia Adventure with Dunaway. They met as undergraduates one night at a fraternity party, and bike-specs-talk turned into arranging a weekend bike trip.

“James and I have been biking all over the country ever since,” says Butler. “We’ve ridden the desert West, bike-packed 300-plus miles through Central Florida, and spent countless days in Southern Appalachia.”

The two friends started the TNGA knowing that it’s a feat just to finish. One of the most daunting parts of the ride is that it’s self-supported, meaning participants have to pack whatever they need for the duration of the ride. There are no nutrition or resupply stations set up along the way. Dunaway knew of three gas stations and a McDonald’s on the route, so instead of packing heavy, he pit-stopped at the filling stations and stocked up on Pop-Tarts, PayDay bars, and a few hamburgers. He’s a minimalist when it comes to nutrition. All he needed was calories to keep his legs going and iodine to purify creek water.

Dunaway’s bike selection for the ride was also modest. Unlike most of the other riders, he chose to ride “rigid”—on a lightweight bike without suspension. Suspension on a mountain bike is a shock-absorbing, fork-shaped mechanism that insulates riders from the bumps on trails caused by running over roots and rocks. Dunaway says rigid bikes climb much better than cushier, full-suspension bikes. There were segments of the ride where Dunaway would climb for a solid 45 minutes, so being free of superfluous weight was a significant factor in his first-place finish.

“My lighter, rigid bike forced me to work with the trail more,” Dunaway explains. “Picking a line and focusing on that, being minimal with my ride—that was much more important to me.”

The trek across Georgia not only covered a lot of miles; it covered a lot of trail styles and starkly different landscapes. Having been a geology major at Sewanee, Dunaway loved piecing together the geological provinces of north Georgia. “I rode across the Blue Ridge and the Valley and Ridge provinces,” Dunaway says. “There was the Appalachian, rainforest-like terrain with big mountains, ferns, and waterfalls, and extra elevation. Then valleys where there are flat, plateau-style ridges. They’re completely different ecosystems with different animals and vegetation. Seeing all that in one go is really neat.”

Dunaway also noticed the anthropological aspects of the ride to keep his mind busy and off the monotonous grind of the pedal strokes. He would ride through luxurious, affluent towns and then immediately cross over into some of the poorest counties in the state.

“There are a lot of highs and lows on a ride like this,” he says. “But you control it all based on your nutrition, hydration, and your sleep. These are the tools that dictate how you feel.”

Dunaway spent the first five hours alongside others on the route, but when he pulled ahead (because he decided to ride through the first night without sleep), he experienced 40 hours of complete solitude—a mental rut that could’ve proved detrimental. Having ridden in the TNGA four times before this summer, Dunaway was already accustomed to the mental dexterity required for such a journey. He finished fifth in 2014, tied for third in 2015, and then won the race in 2016. After a 2018 ride with a Sewanee friend just for fun, Dunaway never thought that 2019 would bring him not only a first-place finish, but a record-breaking one. On his second time through the course, Dunaway recalls hitting a psychological wall so daunting that it prompted him to call for help. After he made the phone call and arranged for a pickup, he fell asleep. He woke up a while later feeling so renewed that he was able to complete the route.

“You get lonely, but I find it easier to get into a meditative state at night,” he says. “Especially climbing at night. Some of these climbs are 45 minutes long. I had a spotlight, so I tried to only look into that light, that solitary circle out in front of me. I found that to be incredibly meditative because I couldn’t see anything else around me. But it does get tough. I even started hallucinating at one point—thinking there were people riding alongside me. Before I got to the last portion of the race, I slept for 30 minutes on a picnic table. After just that minimal amount of sleep, I could see a big improvement in my clarity of mind.”

When he finished the race, Dunaway had smashed the previous record by nearly five hours. Though the only photo souvenir from the ride is a blurry image of the trail-worn Dunaway in the dark prelude to dawn, he did take away from the race a healthy sense of accomplishment. Now, he’s riding that wave of satisfaction into a new chapter in life.

He is currently living and working in Chattanooga—a trailhead city for bike junkies like Dunaway—while he completes applications for medical school. “My dream would be to practice in a small town in the South—a town where I can really get to know the people and make an impact.”

To Dunaway, traversing the grueling terrain of North Georgia was more than a bike ride. It was a way to get to know a place—a place now sprinkled with his blood, sweat, and Pop-Tart crumbs.