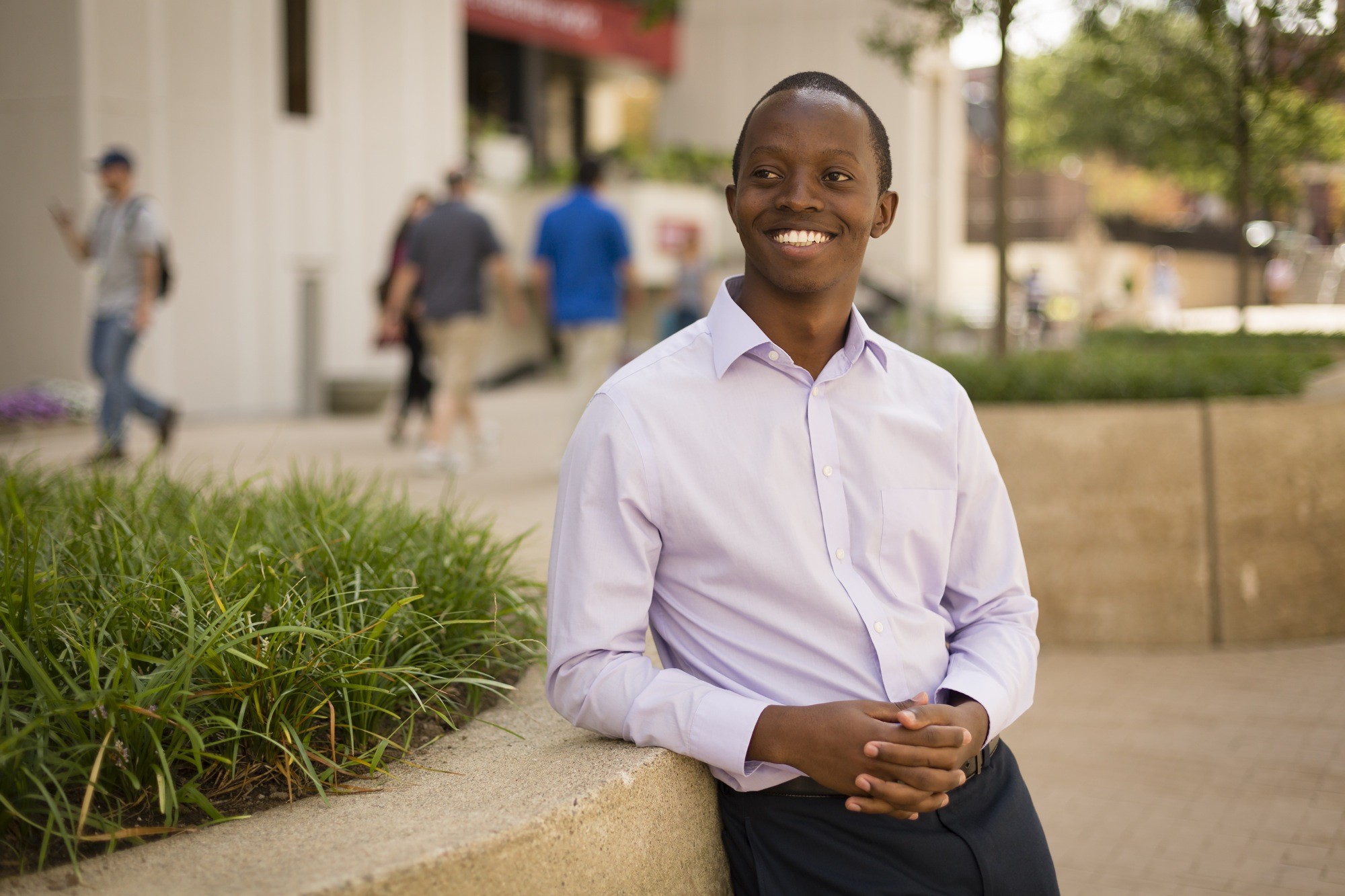 Every Sewanee student has a backstory, but few of those tales have the plot twists of Leonce Nshuti’s long and winding road from child refugee to Ivy League postgraduate.

L eonce Nshuti, a member of Sewanee’s latest graduating class, was an infant when his family fled a government-sponsored genocide in the central African country of Rwanda to an uncertain refuge in the war-torn Democratic Republic of Congo. Earlier this month, Nshuti matriculated at Harvard’s T.H. Chan School of Public Health as a graduate student in biostatistics.

In a recent conversation, Nshuti acknowledged that the first few days of classes at Harvard had been somewhat intimidating: “It’s hard to look around and not be impressed” at the intensity of the academic schedule and the quality and diversity of his fellow students. That sounds like the normal reaction of a student who has just come off four years of academic success at a competitive liberal arts college and is now adjusting to the hyper-competitive environment of a global educational institution.

Nshuti arrived at Sewanee in 2012 as a Rwandan Presidential Scholar. The scholarship program, an effort between a consortium of U.S. colleges and universities and the Rwandan government that began in 2007, had the goal of educating a new generation of leaders for a country that had been convulsed by decades of ethnic strife and civil war.

The program—which includes full remission of tuition and fees by host colleges and funds from the Rwandan government to cover room, board, and a living stipend—continues to send undergraduates to American colleges, but officials at the Rwandan Embassy say that the government is now directing more of its resources to sending students abroad for graduate study.

Rwanda isn’t at the forefront of American public attention these days, but in the 1990s, the small, landlocked country was the site of a 100-day-long frenzy of organized killing that claimed somewhere between 500,000 and 2 million lives and seared the conscience of a world that stood by rather than intervening.

Even today, Rwanda is invoked in foreign policy debates as a symbol of humanitarian failure.

Nshuti was born in Rwanda’s capital, Kigali, in 1993, the year before the genocide, to a father who had earned a master’s degree at a Canadian university and a mother who was a stay-at-home mom. He is one of six siblings.

His father was employed by an organization that helped farmers improve crop yields and develop agricultural cooperatives. Within a few months of his birth, the family decided Kigali was becoming too dangerous, and they departed, first for western Rwanda, then across the border to Congo, which, he says with gentle understatement, “wasn’t the safest place in the world."

Today, Nshuti says he remembers nothing of the years as a stateless, rootless refugee, nor are those years a topic of family conversation.

In 1996, they left Congo and returned to Rwanda, living at first in the rural countryside. One of his earliest memories as a toddler is of a trip to a local hospital for the removal of a large bean he had stuffed up his nose.

Soon, his father began making exploratory visits back to Kigali, where a new government was attempting to put the country on a secure and stable footing, and by 1998, Nshuti, his parents, and siblings were back in Kigali, rebuilding their lives.

When he was old enough to start primary school, Kigali was “very, very calm,” and safe enough that he could walk to school. Because the school had more students than facilities, for a time he had to carry his own seat with him, which was sometimes an empty cooking oil container.

As he reflects back on those years, he sees himself as lucky. “Given where I lived, I was one of the fortunate ones, because my parents could send me to school.”

He also experienced firsthand one of the most abrupt education reforms of recent history. The language of instruction in all Rwandan schools had been French, a legacy of the country’s years under Belgian colonial control. In 2009, the post-genocide government, breaking with the traumatic past, decreed that henceforth, English would be the language of instruction. From one school year to the next, French was out, and English was in.

Nshuti’s father, a Francophone, was teaching at a university in Musanze at the time, and making the switch “wasn't the easiest thing” for him. Nshuti’s mother was herself a student, working to complete her own college degree. She went on to earn a degree in sociology and to a career as a teacher.

He remembers one refrain from both parents throughout his childhood: “Do your homework!”

“I heard it all the time, every day.”

That discipline paid off, and for high school he won admission to a respected boarding school run by the Catholic Church in Musanze, a province in the country’s north that is today famed as the home to many of the world’s few remaining mountain gorillas

He did well at the school, and he credits his friendship with older students with whom he played basketball for pointing him on the next leg of his journey to Sewanee. Several of these players told him they had been offered full scholarships to American colleges and universities as Rwandan Presidential Scholars.

Instead of heading off to medical school in Rwanda, which would have been the next step in his education had he stayed at home, he decided to apply for the program, took the tests required, and was selected.

Nshuti was not the first Rwandan to come to Sewanee as a Presidential Scholar.

Sewanee's first two Presidential Scholars arrived in 2009, and from then through 2014 six more young men came to Sewanee via the scholarship program. Of those eight, all but one have either graduated or are soon to graduate, including one student who is completing a dual degree program, according to Kay McKenzie, the University’s international student advisor.

When he got to Sewanee, Nshuti was faced with a new question: What did he want to study? At first, he thought he might want to be a chemistry student, then he considered computer science, and eventually settled on an economics major.

Early in his Sewanee years, Nshuti crossed paths with then-Director of the Babson Center for Global Commerce Chip Manning, C’82.

Manning recently recalled his first impression of Nshuti as “a shy and reserved young man,” but he soon learned there was “more going on than first meets the eye. He was very cerebral in his approach to life.”

In 2013, Nshuti won admission to the Carey Fellows honors program for business minors, and he was inducted into the Order of Gownsmen. During his Sewanee career, he became a calculus tutor, served as an assistant proctor, and completed successful internships at the University of Arkansas's Department of Pharmaceutical Sciences and at healthcare organizations in the United States and Rwanda.

Shortly before graduation, Nshuti and the other senior Carey Fellows took the stage at Gailor Auditorium to present a consulting project they’d done to help develop a model for an enhanced college transcript.

The hour-long session was what one would expect from a management consulting group—charts, graphs, explanations, all done with professional style. But for those in the audience—including many veterans of decades of such sessions—the “shy and reserved” Nshuti stole the show.

Manning described the impact of what the audience saw that day.

“Watching Leonce do his part, demonstrating excellent public-speaking skills, unencumbered by notes, working the stage with a touch of humor and an easy smile, confirmed his amazing journey and his true transformation, with confidence and self-esteem as a scholar and communicator.”

Nshuti may still be an introvert at heart, but, as Manning added, “You would have never known it by his stage presence that day.”

Now, Leonce Nshuti has embarked on the next leg of a journey that is almost too improbable for a novel plot.

Where does he think he will wind up?

He pauses, then admits, “The most truthful answer is, ‘I don't know.’”

But he is certain of this: “I am extremely glad and extremely grateful. I was born at the right time, however crazy that sounds, and I don’t take my experiences for granted.”