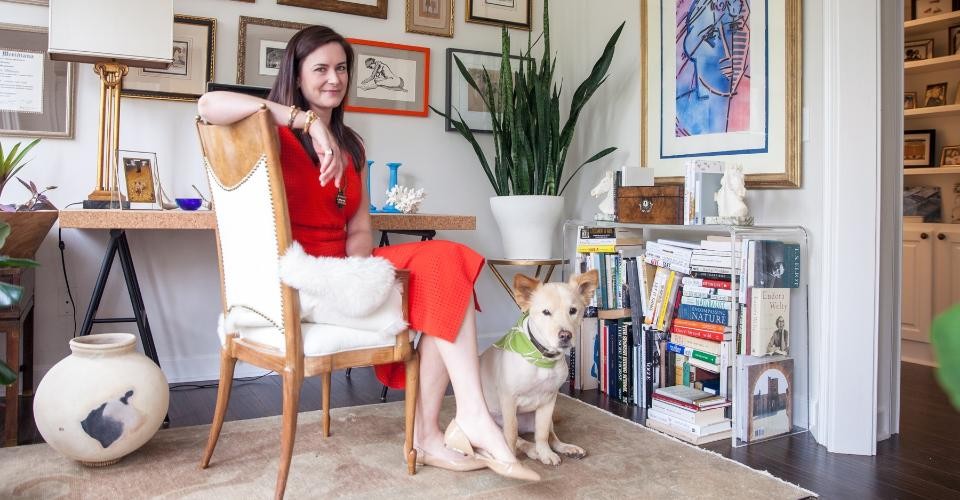 Katharine Wilkinson in her home office in Atlanta, where she worked on Drawdown. Photo by Buck Butler

How to Cool a Planet

A Sewanee Rhodes Scholar digs into the science to offer a humane road map to reversing global warming.

T o some extent, Katharine Wilkinson, C’05, believes in magic. And a good magician might be exactly what the environmental movement needs right now.

The United States has a president who has called climate change a hoax, a secretary of the Environmental Protection Agency working to disable his own agency, and an administration threatening to abandon the Paris Climate Agreement. President Trump recently issued an executive order rolling back federal efforts to curb greenhouse gas emissions from coal-fired power plants and methane from fracking operations.

Enter Wilkinson and her magic wand in the form of a new book, the audaciously titled Drawdown: The Most Comprehensive Plan Ever Proposed to Reverse Global Warming. Dradown is the creation of environmentalist and best-selling author Paul Hawken, who brought on Wilkinson, a former Rhodes Scholar, as senior writer on the project. The book offers what it calls the 100 best solutions to deal with climate change, everything from ideas you’ve already heard of—wind energy, high-speed rail, food waste reduction, forest protection—to stuff you probably haven’t, like microbial farming, wooden skyscrapers, pasture cropping, and hydrogen-boron fusion. For each solution, the book projects potential emissions reductions by the year 2050, along with the estimated cost of implementation and the savings realized.

The magic comes in two forms. First, Drawdown transforms the doom-and-gloom narrative of climate change to a story of hope, courage, and can-do spirit. Eighty percent of the solutions in the book are already unfolding across the planet, some with great speed, and this momentum will largely continue no matter who occupies the White House. Secondly, Wilkinson and Hawken have translated the dry, often impenetrable scientific literature on global warming into a deeply human document, one with compelling prose and a strategic sprinkling of poetry, storytelling, and unexpected historical references. “We hope the book can bring this material to life,” Wilkinson says. “We hope it might even enchant people.”

Wilkinson herself was first enchanted by the environment during her sophomore year of high school, when she spent a semester at the Outdoor Academy in the Blue Ridge Mountains of North Carolina. A unique place, OA combined rigorous scholarship with experiential education, sustainable living, and the fun of summer camp. Rather than simply read about the timber industry, Wilkinson and her peers hiked through an old growth forest and ended up in a clear cut. They read natural history and gardened. Wilkinson fell in love with the nature poems of Mary Oliver while at the school, and she also became a vegetarian there after learning about the detrimental ecological effects of industrial-scale livestock farming. “There are multiple ways of understanding the environment, not all of them intellectual,” she says. “OA did such a great job with a head, heart, hands approach.”

At Sewanee, Wilkinson considered pursuing a degree in environmental studies but quickly became interested in studying religion. Like her advisor, Jerry Smith, Wilkinson was fascinated with the intersection of religion and ecology, and Smith told her something that stuck: “Specialization is for insects.” “That’s not meant to demean insects,” she insists. “He meant it as a call to be interdisciplinary. Interdisciplinary places can be magical places. When you have two different ecosystems side by side, often the fringe areas between them are the most interesting.”

Wilkinson won a national Udall Scholarship for her environmental activism on campus, work that included pushing the administration to implement a student fee to fund a partial switch to wind energy. Not everyone appreciated her advocacy, but she welcomed the philosophical diversity on campus. “It helped me refine my ideas, having peers who saw the world differently than I did,” she says. “I’m glad I didn’t go someplace where the students all have similar views.”

At Oxford on her Rhodes Scholarship, Wilkinson found her master’s program, Environmental Change and Management, dry and lacking a human component. So she switched to a Ph.D. program that returned her to the intersection of religion and ecology, and she focused on the unexpected environmental awakening among American evangelical Christians. That research became the material for her book, Between God & Green: How Evangelicals Are Cultivating a Middle Ground on Climate Change. The Boston Globe called it “a vitally important, even subversive story.”

But just as she was finishing at Oxford in 2009, two climate-related curveballs caused Wilkinson to question her chosen path. In what looked like the best chance ever for the U.S. to adopt cap-and-trade legislation, a bill passed in the House of Representatives but then died in the Senate. Shortly after that, the international climate talks in Copenhagen disintegrated in chaos. “It was disorienting,” says Wilkinson, who subsequently returned home to Atlanta for a spell and worked for a couple of consulting firms.

Then, in 2015, she met Hawken, the founder of Project Drawdown, and his upbeat outlook on climate immediately drew her in. To Hawken, humanity possessed the collective wisdom to address global warming. “Drawdown” is the point in time when the concentration of greenhouse gases in the atmosphere peaks and begins to decline—achieved because emissions slow and carbon is reabsorbed from the atmosphere. Hawken wanted to know if it could be reached by 2050 by going all in on solutions already known. The first step was finding and concentrating the best of those in one place, which no one had ever thought to do. “We didn’t invent this plan,” says Wilkinson, who joined the project in early 2016. “We were just archaeologists. The blueprint already existed, in the same way that information existed before Wikipedia.”

Synthesizing information from dozens of researchers, Wilkinson worked solution by solution to make the material come alive. In the section on rooftop solar, for example, she discovered that a tinkerer named Charles Fritts assembled the first solar array on a rooftop in New York City in 1884—who knew?—even though he had no idea why his contraption, a thin layer of selenium on a metal plate, produced electricity when exposed to light. In a chapter on the never-sexy topic of peatlands, she quotes Nobel Prize-winning Irish poet Seamus Heaney’s 1969 poem “Bogland”: “The ground itself is kind, black butter.”

Wilkinson sees herself continuing to write, speak, and teach on environmental issues in the future, possibly on a college campus. For now she’s eager to share the book—and the opportunity to reimagine and rewire the world—as far and wide as possible. “The climate world can be pretty wonky and techy,” Wilkinson says. “There’s a need for other voices, and more female voices. I hope I can be a useful one.”