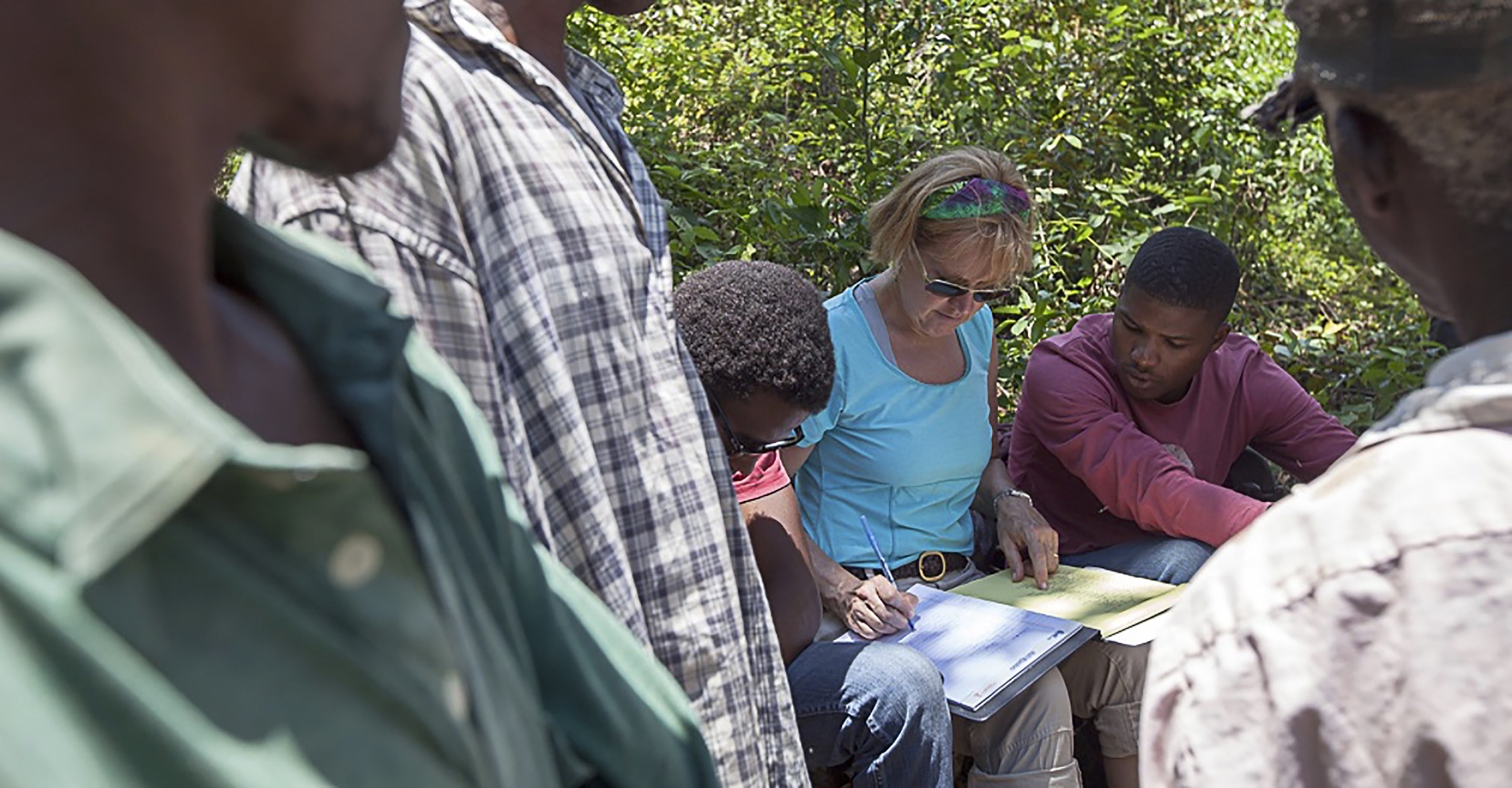 Deborah McGrath consulted with Haitian farmers and agronomists when the coffee project was just getting started in 2013. Now, after more than five years, McGrath says, "we know that the farmers respond really well to earning carbon payments, and not only do they plant trees, but the trees live and thrive in the hills." Photo by Stephen Garrett, C'01

When Deborah McGrath took her first trip with the University’s outreach program to Haiti, she freely admits, “I didn’t know anything about coffee.” But that was soon to change.

Now, she’s able to hold forth knowledgeably about the advantages of cultivating Coffea arabica katoura over Coffea arabica typica, at least in the area around the Haitian Central Plateau. She can give you a pretty good idea of how much carbon is sequestered in the trees shading the coffee and how much that sequestered carbon should be worth in the international trade in carbon credit certificates.

McGrath, a professor of biology and assistant dean of the environment, and Pradip Malde, an art professor and documentary photographer, have been traveling to Haiti with Associate Director of Civic Engagement Dixon Myers since 2006. Initially, Myers had been leading students on dental and medical trips to Haiti.

Myers envisioned integrating outreach trips to Haiti to encompass more of the University’s faculty and student body. One obvious problem was addressing deforestation in the country’s remote and rugged Central Plateau region. To do this, they partnered with the Haitian nongovernmental organization Zanmi Agrikol (Partners in Agriculture).

This year marks the sixth year of McGrath’s leadership of a pilot project that encourages local farmers to plant trees to rebuild the plateau’s ravaged terrain. When the project was launched, it was conceived as a five-year proof-of-principle experiment.

McGrath had been studying tropical deforestation since her days as a graduate student. Much of her research was concentrated on the Amazon, where the land was being deforested to exploit the region’s seeming abundance.

Haiti’s Central Plateau presented a different challenge; the deforestation had already taken place, and the terrain was so degraded that farmers had little choice but to continue to practice slash-and-burn agriculture simply to survive.

Could some way be found to make it financially feasible for subsistence farmers to devote scarce resources to relatively slow-growing trees instead of trying to eke out a minimal livelihood growing annual crops that only further depleted the poor, eroded land?

The option McGrath and her colleagues chose was to offer payments to the farmers to sequester carbon. But the farmers needed more than just a payment of perhaps $30 per year for planting trees. They needed to find a crop that could help to restore the land.

Many of the farmers wanted to bring coffee back to the highlands. Growing shade trees is essential to producing good arabica coffee because the species does not thrive in full sun.

There’s nothing at all new about growing coffee in Haiti. After the introduction of the coffee plant to the island in 1715, coffee was widely cultivated in the then-French colony, and by the mid-1780s, Haiti supplied half of all the coffee in the world market, using African slave labor. Well into the 20th century, Haiti was a major exporter, but disasters and instability had destroyed much of the infrastructure and knowledge required to produce an exportable crop in this region of Haiti.

Would the idea work? The data gathered over the first five years show it does.

“Now we know that the farmers respond really well to earning carbon payments, and not only do they plant trees, but the trees live and thrive in the hills,” says McGrath.

Initially, all the coffee seedlings were produced by two nurseries built cooperatively by local agronomists, farmers, and Sewanee students enrolled in study trips, but now farmers are growing their own seedlings, too. McGrath says analysis of the most recent survey of 50 farms enrolled in the pilot project show a 10-fold increase in the number of trees planted. And the trees are producing enough coffee cherries that some farmers are selling coffee to a Haitian cooperative, bringing in a new source of income.

The shade trees are numerous and large enough to make sustainable harvesting of wood for construction a longer-term potential source of income.

Based on the enthusiastic reception that the Central Plateau project has received, “We’ll keep paying them as long as they continue to sequester carbon in their trees,” McGrath says.

As an ecologist, McGrath knew she would need data to make the case for the project. The project would not be sustainable if the tree surveys were left for Sewanee students to do alone. For one thing, Haiti is not always politically stable. More than one trip to the island has been cancelled because of demonstrations and political violence. Moreover, the idea was always to leave the project in the hands of Haitians.

This would mean building local capacity for the data collection. But would this work?

“We were wondering five years ago if we could train Haitian teams to do the survey work and provide us with the data we needed to verify carbon sequestration. Now we know that can happen, too.”

These are just a few of the challenges the project has faced over the years. For instance, there’s the problem of coming up with fact-based figures on how much carbon different kinds of trees actually sequester.

McGrath says when she was researching in the Amazon, she had to cut down trees to estimate carbon sequestration, but in Haiti, she doesn’t want to do that—a single shade tree can represent a significant lost resource. So she’s working on other ways to get the data needed.

Then there’s the question of finding the money needed to pay the cost of the carbon credits. For now, much of the funding has come from Sewanee students, who voted to direct funds from the student “Green Fund” to purchase carbon credits from the farmers to offset carbon dioxide emissions produced by University-related air travel. Other funding has come from private sources and individuals.

A 2018 resolution from the General Convention of the Episcopal Church called on the church to develop a policy to offset church-related air travel emissions, which are estimated at about 3,000 to 3,500 tons a year. Through an effort led by the School of Theology’s Andrew Thompson, assistant professor of theological ethics, the church has agreed to purchase some of its carbon offsets from this project.

McGrath says the model has proven so successful that Sewanee’s Haitian collaborator, Zamni Agrikol, is now working with the Nature Conservancy on ways to formalize the market for subsistence farmers to access the global carbon credit market.

“All these things we didn’t envision five years ago, we now know, and they allow us to take the next step toward a greater vision,” she says. “I truly believe it’s about the human connection.”