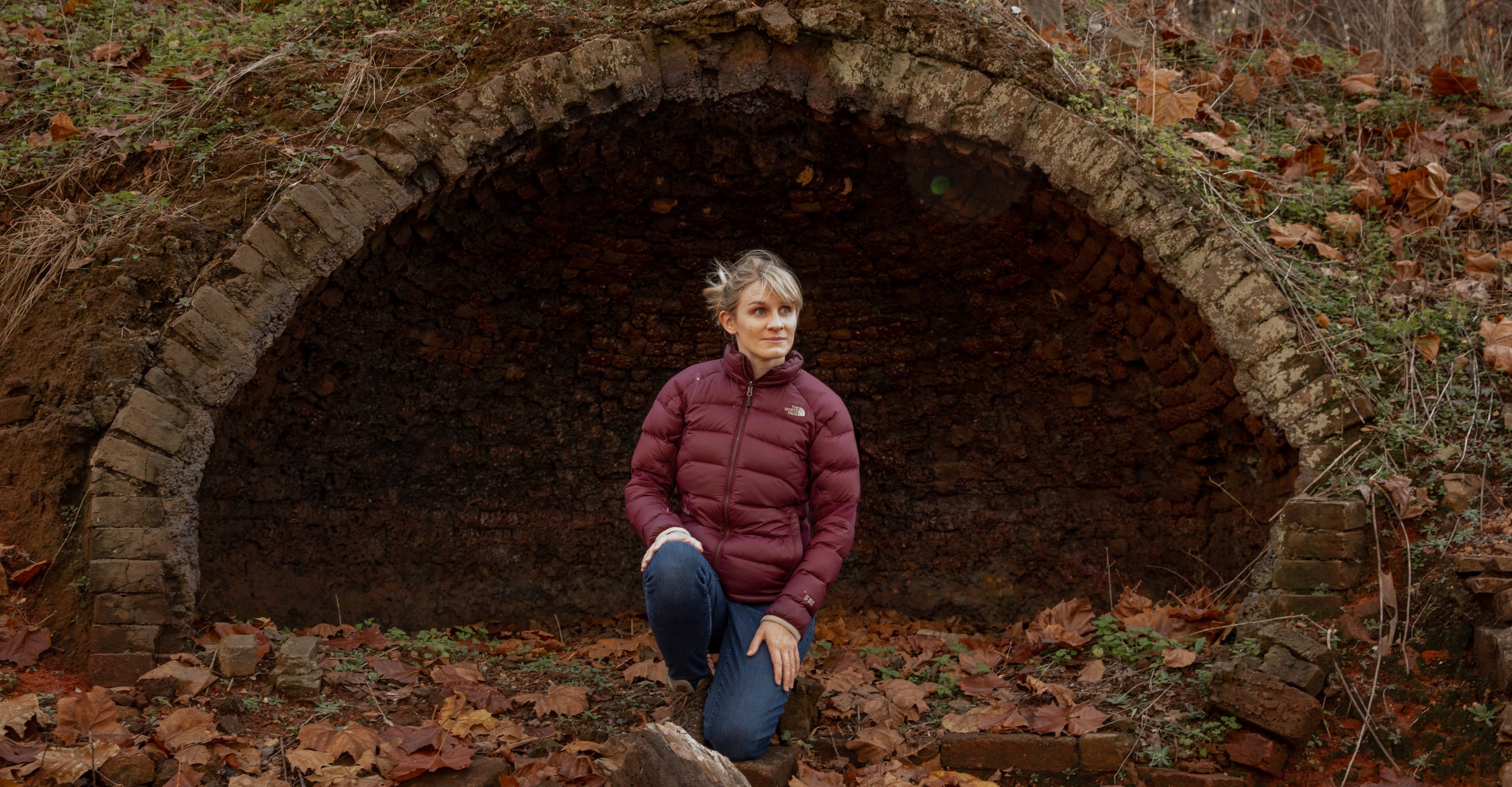 Visiting Assistant Professor of History Camille Westmont, in front of a coke oven in South Cumberland State Park, near the site of the Lone Rock Stockade. Lone Rock prisoners burned coal in the ovens to produce coke, a fuel used in ironmaking. Photo by Buck Butler

A Sewanee history professor’s archaeological excavation shines a light on a dark corner of local history in which Black prisoners were forced to mine coal without pay in Reconstruction-era Grundy County.

When a prisoner arrived at the Lone Rock Stockade—a prison located in what is now part of South Cumberland State Park just outside Tracy City, Tennessee—he was immediately sent to the stockade physician’s office. There, he would be issued one black-and-white striped uniform that he would eat, sleep, and work in. But more importantly, after a basic health examination, the physician would assign the prisoner a daily quota of coal he would be forced to mine without pay on behalf of the Tennessee Coal and Iron Company (TCI). As part of TCI’s convict-leasing program, a largely unknown and disturbing piece of Reconstruction-era history, the company moved more than 10,000 prisoners—mostly Black men—through its mines between 1871 and 1896. Now Camille Westmont, a postdoctoral fellow in historical archaeology in Sewanee’s Southern Studies program, is leading an excavation of the Lone Rock Stockade to uncover the dark history of one of the South’s most prolific convict-leasing programs.

Legal under the 13th Amendment, which abolished slavery except as punishment for a crime, convict leasing was used to boost lagging economies and extend the institution of slavery in a new way. With the installation of Black Codes, new laws designed to target Black men in particular, prisons filled up with men carrying harsh sentences for petty crimes, providing an endless stream of workers for TCI and others.

The convict-leasing program at Lone Rock wasn’t on Westmont’s radar when she arrived in Sewanee in spring 2019 for a two-year visiting assistant professor appointment. It was an offhand remark at the Grundy County Historical Society that opened up a new avenue of research.

“They happened to mention that a lot of the coal from Grundy County was actually mined by convicts,” says Westmont, who has spent her career researching 18th-, 19th-, and 20th-century post-industrial coal mining communities. “I had no clue about convict leasing. I’m particularly passionate about this research because I truly think this is a vitally important aspect of American history, and people just don’t know. You can really draw this straight line from slavery to convict leasing to chain gangs to mass incarceration today.”

Westmont began her research into the Lone Rock Stockade by first sourcing archival documents, including the prison records of the men and women who passed through or died there. This past summer, she launched a formal excavation of the former TCI-owned site.

Convict leasing pre-dates the Civil War, and following Emancipation there was a renewed drive and urgency to grow the practice, especially with a diminished white workforce. The effects of racially motivated legislation had already started to kick in, and the overall prison population was growing fast. In 1860, less than 5% of inmates in the Tennessee prison system were Black. By 1866, that number had risen to 52%. And by 1896, it was as high as 75%.

Prisons were overcrowded, and the economy continued to flounder. Colyar had no one to work in his mines. So he presented his Nashville political allies with a solution to solve all their problems. Colyar would pay the state penitentiary to lease its prisoners and take on the financial responsibility of housing and feeding them. In return, he would have a new workforce he didn’t have to pay.

Westmont describes the Lone Rock Stockade site as exhibiting “unbelievable preservation.” While there’s not much left in the way of the physical stockade itself, the design and layout of the space, including evidence of the well and sanitation drainage, plus objects and artifacts remain.

A wooden fence two stories high enclosed the property, an area only slightly larger than a football field. Within the stockade there were barracks, a hospital, commissary, kitchen, dining hall, bath house, and a prison guard house.

“The bathhouses were segregated, which when the overwhelming majority of the people in the stockade are Black, it’s interesting to see that there’s even racism in the architecture of the prison,” says Westmont.

What started out as 100 inmates in the early 1870s eventually grew to more than 500 by the 1890s. Upwards of 95% of prisoners at Lone Rock were Black, ranging in age from 14 to 70. While the prison population was mostly male, there were female prisoners too. These prisoners were forced to provide domestic services for the stockade and even nearby community members.

“The state was making unbelievable amounts of money off the convicts,” says Westmont. One lease could be worth over $100,000 per year to the state, or nearly $2.9 million dollars today.

Prisoners worked in the mines six days a week without compensation. (Prisoners could choose to work on Sundays for a nominal wage.) Around 10% of prisoners died each year. Tuberculosis, typhoid fever, and intestinal issues were primary causes of death, along with mining accidents and guards shooting prisoners. If a prisoner didn’t meet his daily coal quota, which could be as much as two tons, he was publicly whipped.

As the years went on at Lone Rock and around the South, political unrest between the companies funding convict-leasing programs and free miners began to fester. TCI and companies like it were using convict leasing to control the free labor market.

“If you are a free miner and you try to go on strike for better wages or safer working conditions, essentially your boss would say, ‘OK, you can go on strike, but we’re just going to import some of these convicts to break the strike,’” says Westmont.

It was this particular twist to the convict-leasing program—not the forced unpaid labor of prisoners—that eventually led to its demise. Armed free miners attacked Lone Rock more than once, burning the stockade to the ground. In what came to be known as the Convict Lease Wars, free miners continued to fight back against convict leasing. Soon, aligning with supporters of convict leasing became political suicide, and in 1896 the practice was outlawed. The stockade was shut down, and TCI eventually moved its headquarters to Birmingham.

The Lone Rock Stockade Project’s excavation, paused due to COVID-19, has already revealed some interesting findings.

“We’re seeing evidence of an effort to standardize the prison, which is not typical for prisons at this point,” says Westmont. “My hypothesis is that Tennessee Coal and Iron is enforcing industrial discipline in a prison environment, which is a new approach to incarceration in Tennessee. I’m seeing standardized uniforms, all the same buttons, rather than the cheapest options available, and identical, factory-produced stoneware vessels instead of the handmade vessels you would expect in the South.”

Westmont’s team has also been able to transcribe more than 1,500 prison records of inmates sent to Lone Rock. It’s clear to Westmont this project will extend beyond her two-year postdoctoral program. But the plan is to return to the site next summer to resume excavation efforts.

Westmont says, “This research has really highlighted to [South Cumberland State Park] that this is a very important site that needs interpretation. It needs protection. It needs some kind of attention.”