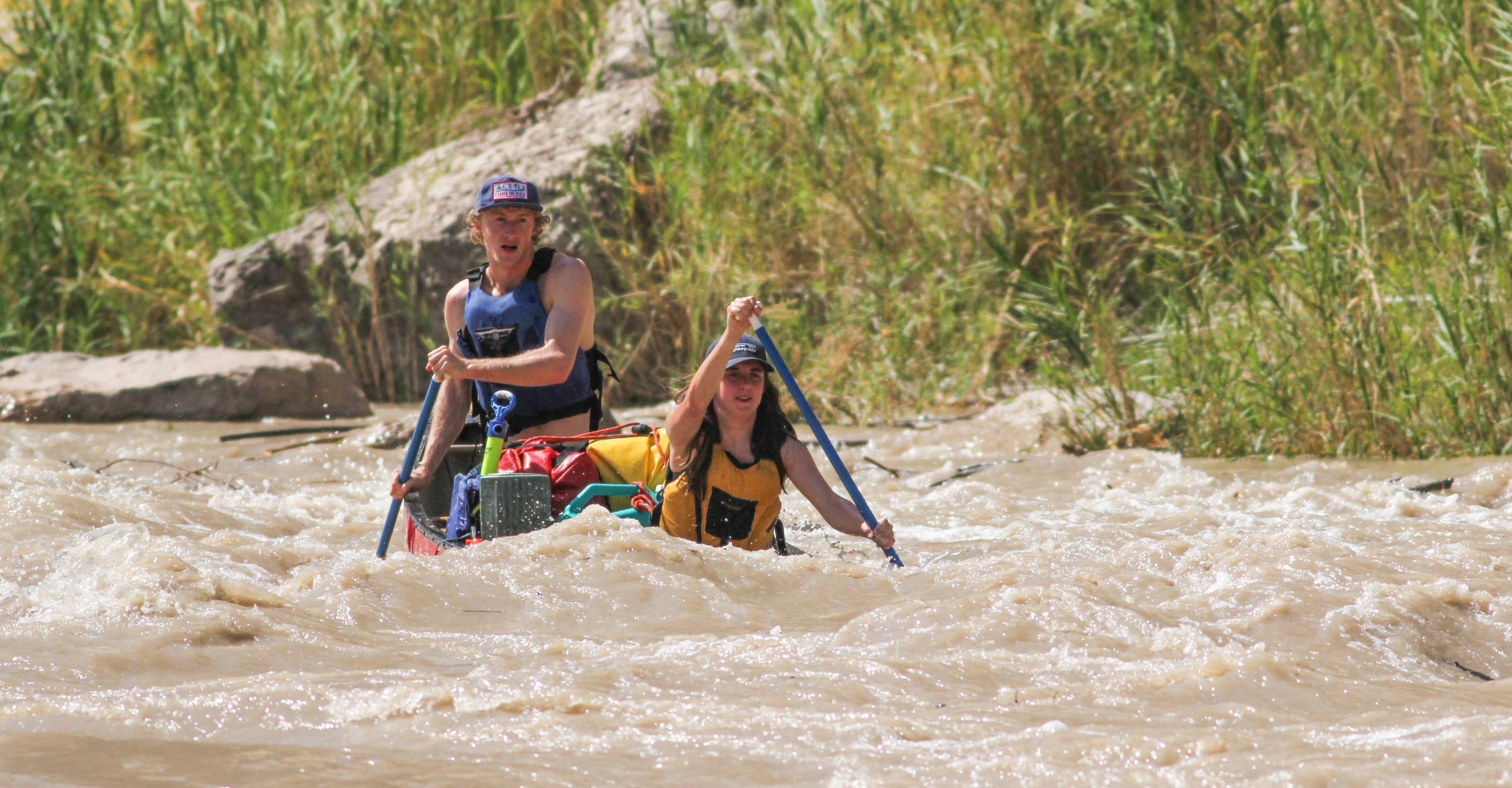 While 16 Sewanee students enjoyed a once-in-a-lifetime spring break adventure on the Rio Grande, the world beyond the canyon was changing in ways they couldn’t imagine.

It was just before lunch when we came to our first major rapid of the trip, the first real test we’d face as a group. We hauled our canoes to the muddy bank to get a better look at Hot Springs Rapid and to try to find the optimal line—the best way to navigate through the treacherous rocks and waves. The water level was rising fast, the waves were getting bigger, and the roar was deafening. We didn’t know if it was rain from farther up the desert canyon or water from a dam release. And, thanks to spending our spring break off the grid on a Sewanee Outing Program trip on the Rio Grande, we had no idea how drastically the world outside these canyon walls was changing as we grabbed our paddles and prepared to face the challenge in front of us.

Six days earlier, as we set out from Sewanee, things were beginning to look different in the world around us. Like McClurg baggie-wrapping croutons, and Sewanee spring break outreach trips being canceled. Fortunately for the 16 of us who signed up to float the Rio Grande, our trip was still happening. From the time we hit the road in two vans with canoes in tow, there were signs that all was not normal, but with our PFDs packed and spirits high, we drove on.

On the second day of driving we had been on the road for a couple of hours when we pulled over for a quick breakfast. I remember despondently eating an Egg McMuffin under the gaze of a gaudily painted Ronald McDonald statue and watching the stock market crash on TV. Moments like this affirmed that the COVID-19 pandemic was real and, eventually, headed our way. But before we knew it, we had put our canoes on the river and were completely out of touch, without cell service for eight days.

Floating through a desert landscape on water so muddy it could have been a river of Yoo-hoo was surreal at times. It’s easy to forget about the real world and its anxieties when you’re surrounded by massive limestone bluffs, stopping to bathe in natural hot springs, and enjoying the wildlife of the Chihuahuan Desert. As a group, we made a conscious decision not to talk much about the coronavirus, instead choosing to enjoy the camaraderie that grows organically on an adventure like this and cueing up small talk that had us laughing the whole time. Ignorant bliss is not the worst thing in the world, but the longer you stay there, the greater the shock when the hard truth comes knocking, as it always does. 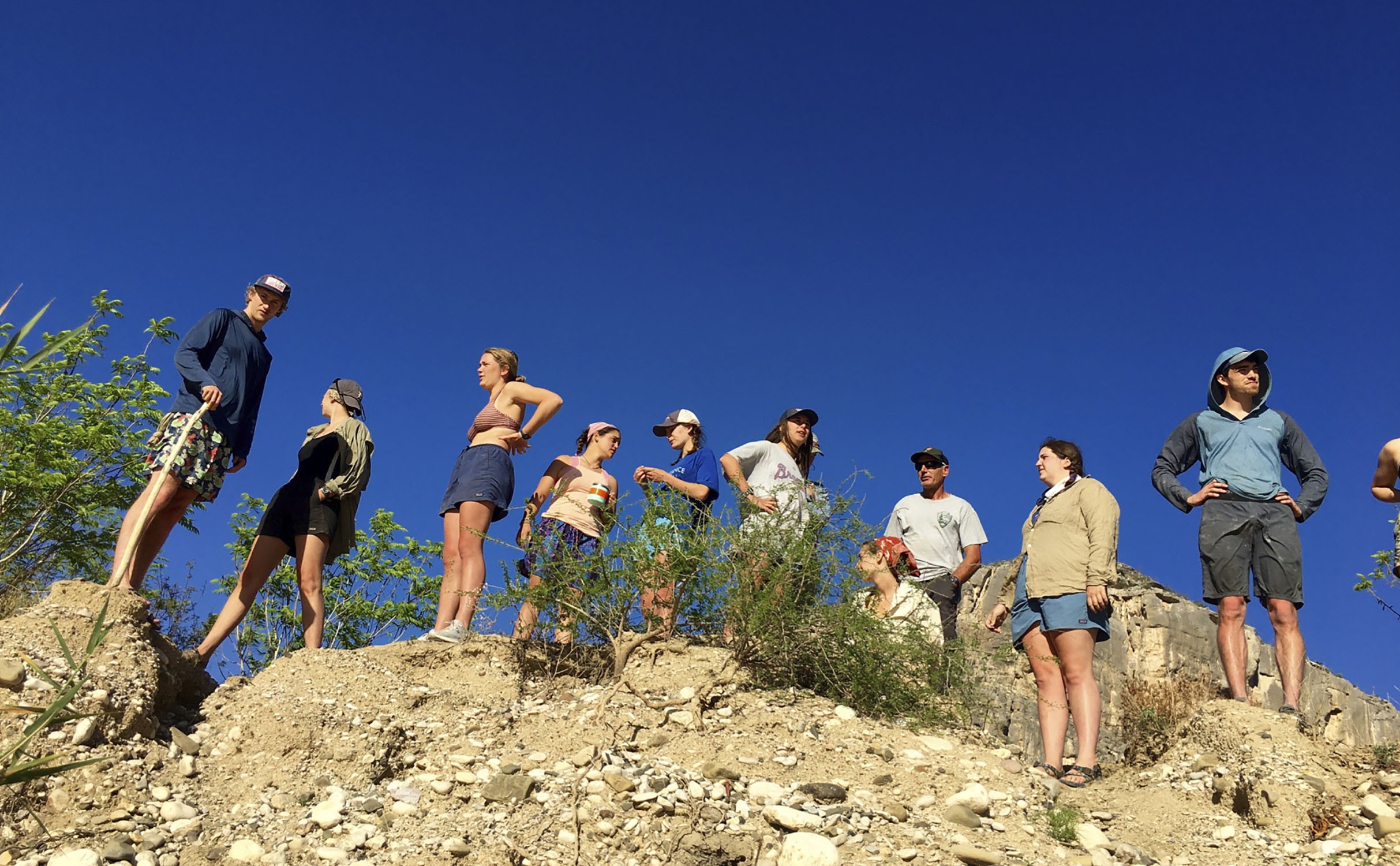 We weren’t exactly oblivious, and we weren’t living in denial of the harsh reality of COVID-19. It’s just that we were placed in a unique situation in which our imaginations had more authority than CNN in determining how we thought things in the world might be unfolding while we were on the river. I think I speak for many of us in saying there was always a knot at the bottom of our stomachs reminding us that the global health crisis might be as serious as the colleges and universities that had already canceled classes thought it was. But could this thing really affect Sewanee in its relative geographic isolation?

The day we pulled the canoes out of the river for the last time was blazingly sunny, and the small shrubs and rivercane that covered the banks did their best not to shrivel under the desert rays. As we unpacked the boats and loaded the vans, I sensed a nervous energy slowly building in our squad. At this point, we’d all become close enough to pick up on subtle shifts in one another’s moods. Soon enough we were driving down washed-out desert roads, away from the safety of the river and toward the uncertainty of cell service.

We stopped at a sign in the middle of the desert’s sandy hills to take one last group photo. I rode in the second van, and before it had come to a complete stop, a friend in the first van, Emily Stone, C’20, pulled open our sliding side door and broke the news she had received in an email: We would not be going back to our classrooms in Sewanee. Classes would be held online, graduation was postponed, and our senior spring semester was down the drain. It was like the whiplash you feel when your canoe slams into a rock in a big rapid and dumps you in the water.

We tumbled out of the van to take the photo, but our normally garrulous group dynamic had taken a somber turn. We were dismayed by the news but also by the realization that the rest of the Sewanee community had experienced this same shock days earlier, without us.

On top of this startling news, there was something else making my heart beat faster. On this same day, I was supposed to find out whether I had received the Watson Fellowship that I applied for months ago. While I was nervously milling around, biding my time to check the results on someone’s phone, Vanessa Moss, C’20, wrapped her arms around me, letting me know that I had, in fact, received the fellowship. I was numb, not knowing whether to feel heartbroken by the fact that I wouldn’t even be able to say goodbye to the friends and faculty I’ve come to know and love at Sewanee, or ecstatic that I had been lucky enough to receive the fellowship that had occupied my dreams and idle thoughts for months.

COVID-19 has taken something away from the Class of 2020 and people all over the world. But it has also taught us lessons that are almost too painful to learn. You don’t know what you’ve got until it’s gone. In the moment, all I could think of was the Domain and how thankful I am for all the experiences, relationships, and opportunities that Sewanee has given me. Opportunities like making lifelong friends on an eight-day canoe trip on the Rio Grande.

Reflecting on the unthinkable circumstances that spat us out of Sewanee six weeks earlier than anticipated, I’m thinking of the Rio’s muddy water. Constantly moving, flowing downhill, and pushing forward regardless of the world around it, it makes its way through a desiccated landscape that is inhospitable to most life. The river is battered by rocks, halted by dams, and sucked dry by agriculture, but it always finds its way to the sea. The river’s path is like many of our own journeys right now. In a time when nothing makes much sense, and the world we once knew has been thrown out the window, we’re all doing the best we can to pick up the pieces and make the best of an imperfect situation. Sewanee, and its community, is doing its best to float on, knowing that we will all be reunited again someday soon.