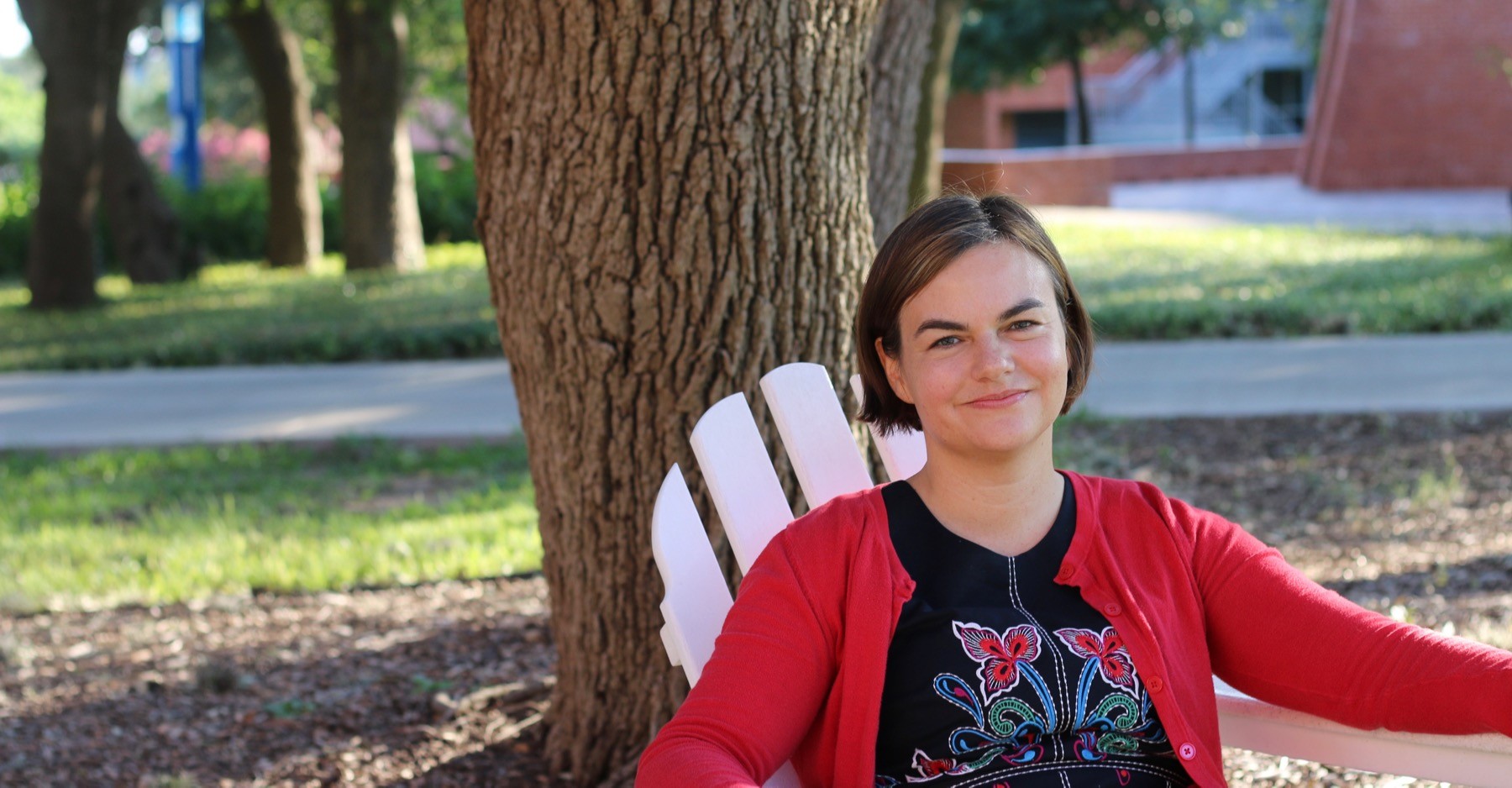 Kelly Grey Carlisle on the campus of Trinity University, where she teaches English and writing. Photo by Will Bostwick

Finding Beauty Among the Wreckage

A new memoir from Kelly Grey Carlisle, C’98, tells the story of an abandoned baby, a murdered mother, and an unorthodox childhood in a Los Angeles marina.

T he only time Kelly Grey Carlisle remembers meeting the LAPD homicide detective who lifted her three-week-old body from the half-opened dresser drawer of a seedy motel room, she was eight years old, in her Easter dress, with a stack of report cards arranged neatly in her lap. Her grandfather wanted to show the detective that the baby he had carried from the motel room that night had, against all odds, turned into a bright, happy young girl. The detective had investigated the murder of Carlisle’s mother—a murder that, to this date, remains officially unsolved.

Carlisle, C’98, a professor of English and writing at Trinity University in San Antonio, has just published We Are All Shipwrecks, a lively and lyrical memoir documenting her unorthodox childhood and her effort to come to terms with her upbringing. In the shadow of her mother’s tragic murder and her father’s absence, Carlisle was raised by her maternal grandfather, Richard, and his second wife, Marilyn, who together ran a profitable porn shop in Los Angeles. When her mother was killed, Carlisle’s maternal grandmother, Spence, was given custody, but she died of a stroke when Kelly was only four. For much of her childhood and adolescence, Carlisle lived with her grandfather and Marilyn on a boat docked in an L.A. marina.

Richard, it turns out, was an undocumented immigrant from England whose stories about his past were as colorful as they were unreliable. He tells Kelly he’s an orphan of royal lineage who has written for television and rubbed shoulders with Hollywood elite. He graduated from Eton and was drafted into the Royal Navy just before graduating from Cambridge. He survived the battle of Dunkirk, was a chef, a secret agent, and a war hero. Readers of Carlisle’s memoir don’t know whether to believe any of this—neither does the adolescent Carlisle.

Shipwrecks portrays a difficult, at times tumultuous, upbringing that is, nonetheless, full of love. Marilyn, in the end perhaps an even more dynamic character than Richard, is not without her demons, but she graces the pages of the memoir with her meticulous bookkeeping, her walks with Kelly among the coastal tide pools, and her stories from volunteering as a civil-rights activist in Mississippi in the ’60s.

In the book, Carlisle says the marina where their boat was docked “was an ugly place.” It stunk of cat urine and was blanketed in shrouds of dust. Oily and metallic iridescence clung to the boats and shimmered on the water’s surface. “It was also the first place I’d really noticed beauty,” she writes. “The glint of swarming minnows, the way a full moon hung suspended in a cargo crane, a great blue heron standing like a ghost outside our kitchen window, his yellow eye staring through me.”

It’s an idea that applies to much of Carlisle’s early life—she loved the people and places of her childhood with a child’s innocence and curiosity. Now, she says, she is glad to have been exposed to the unseemly elements, and to have come out the other side.

“I’m actually profoundly grateful for that experience because I think I can see beauty in a lot of places where maybe it’s not immediately obvious,” Carlisle says. “And I also value it, especially natural beauty, so much. So, you can imagine moving from that place to Sewanee.”

Carlisle writes beautifully of her first visit to Sewanee, during a weekend for potential scholarship recipients. The night before she flew back to California, she writes, “I walked in the warm rain on a deserted street in the dark and felt completely safe. I passed an old cemetery, groves of hundred-year-old trees, the Episcopal chapel with its intricate rose window … standing in front of it, I felt warm and light, close to God, to my real self.”

She got the scholarship, packed her belongings, and moved across the country. “I remember what must have been my first couple of weeks there, sitting by a tree at night outside the chapel and just crying because I realized I had four years of that intense beauty before I had to leave. It seemed like the most amazing gift in the world.”

At Sewanee, Carlisle met the man who would become her husband, Ben. She spent the first couple of years processing the events and circumstances of her childhood. She studied English and became involved in the church. After graduating, she moved back to L.A. for a year, then followed Ben to Lincoln, Nebraska, where he was in graduate school. Soon, Kelly also enrolled in graduate school: first a master’s degree in English literature, then a Ph.D. in English with a creative-writing concentration.

Sitting in her third-floor office overlooking the sprawling live oaks and red brick buildings of Trinity’s campus, Carlisle remembers when she was first encouraged to tell her story. “I was writing fiction, and, you know, in grad school you go to bars and talk about stuff. So, I would tell these stories from my childhood, and people would say, ‘You should write about that.’”

Carlisle did sit down one day and tried to tease out why she had a lingering feeling that she didn’t fit in. She concluded that it stemmed from all the tragic deaths in her family. That essay won an award and prompted another essay. After that second essay, she had the sense that she might have a longer story to tell. “I realized at that point: There’s actually a bigger story, of my life, and it actually would be a good story,” she says now. “Even though I realized my life was weird, I never thought it was worth writing about until that moment.”

In one particularly heart-rending scene from the book, after Kelly is shaken from a trip Richard insisted on taking in the boat out to Catalina Island, she climbs out to the top deck at night, and, as she tries to fall asleep, sets her mind on the normal life she doesn’t have. “When I grew up, I’d make a normal family. I decided I wanted this more than I wanted anything in the whole world … our life would be really, really, gloriously boring. I fell asleep to that happy thought.” Asked whether she got that normal life, she says, “Yes, I think I got it."

As Kelly and Ben began their normal life and that normal family, Kelly finished her Ph.D. and continued work on the book in earnest. An early draft of what ultimately became We Are All Shipwrecks was her dissertation. It took about 10 years to arrive at the final published manuscript. During that time, she contacted the cold-case detectives in charge of her mother’s case, and with them made significant headway in filling in the details of the story of her mother’s death. “It’s a better book because I waited,” she says.

Memoir is a tricky medium because you can almost as easily hide behind the story you tell as you can reveal yourself. While writing, Carlisle felt the tension of these competing instincts. “I always felt as I was writing: Well, I must not be doing it right, because I don’t feel like I have opened myself up to my bare bone. I just don’t feel like I’m laying it all out there in really vulnerable-making ways, but then I was like, OK, what am I hiding? And I never really felt as if I were hiding a lot.”

Though many of the revelations in the story came to her painlessly, looking back, Carlisle remembers once being literally knocked over by writing this book. She was at a writing retreat in Virginia. It was an idyllic setting where she watched cows roam over rolling pastures. She was writing a particularly emotional scene. “I was just writing and writing, and I was so upset at the end of it, I was like: I have to leave the room.” She finished the passage, and in a flurry got up to leave, “…but thing is, I guess I forgot where the door was, and so I ran right into a concrete wall.”

Carlisle’s mother had fallen out with her own parents well before she was killed, and she later turned to prostitution for income. Her life and the love she never found haunts Carlisle throughout the memoir. “If there is any redemption in my mother’s story, it is this: When they were given a second chance, my grandfather and Spence took care of me.”

Carlisle herself is another agent of redemption in her mother’s story. From the very beginning, the odds that she had to beat, just to get the normal life she dreamed of as a little girl, were daunting. But she did it.

“I don’t even know that normal is the highest goal anymore,” she says now. “I think my family, as weird as it was, was actually loving, and maybe that’s the highest goal—to have a loving family.” She pauses a beat and then adds, “Stability is probably good, too.”