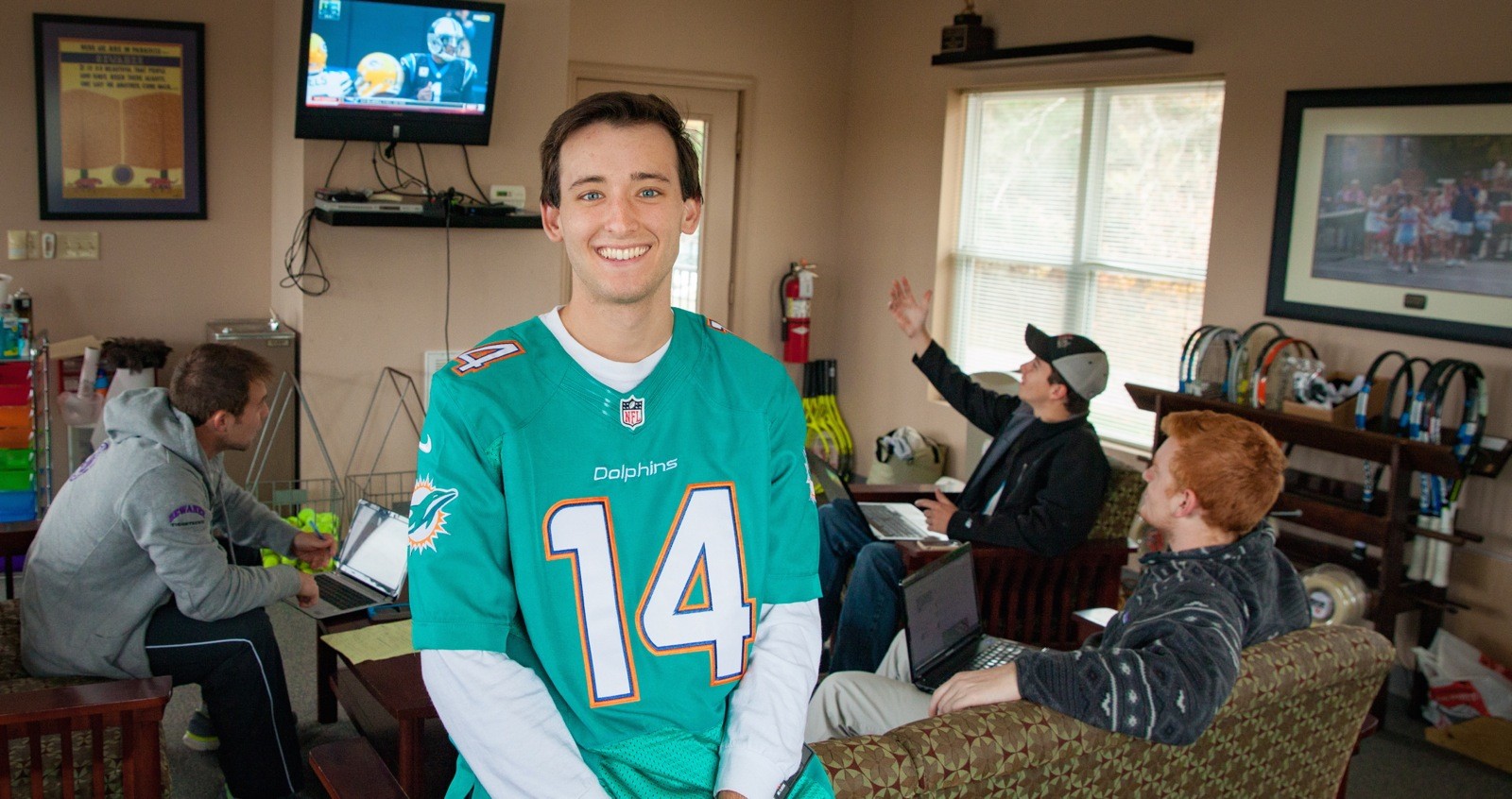 Game day: Every Sunday during the NFL season, Eric Roddy and friends gather for a day-long football binge.

Sewanee’s latest Rhodes Scholarship finalist has one eye on the future and one on the Miami Dolphins.

BY DAVID B. COE

L ess than three weeks before he is to interview for a Rhodes Scholarship, Eric Roddy, C’16, is a nervous wreck. But not for the obvious reasons.

“Play defense!” he shouts, his attention divided between his laptop and the Miami Dolphins-­Buffalo Bills game he watches in the “treehouse” at Sewanee’s John P. Guerry Tennis Pavilion. Shoddy tackling by Miami’s defense leads to a rushing touchdown for the Bills. “Can’t you stop him?” he says, shaking his head. One of Roddy’s friends grabs the remote and switches to the Carolina­-Green Bay game for a single play. Then we’re back to Miami-Buffalo. College-­age football fans? Absolutely. But for Roddy, this is more than entertainment. It’s his job.

By any measure, Roddy has enjoyed a successful fall. On Sept. 27, he and his doubles partner, Jack Gray, C’19, won the Intercollegiate Tennis Association Atlantic South Regional Doubles Championship, automatically qualifying them both for ITA All­-American honors. Three weeks later, they placed second in the USTA/ITA Small College National Doubles Championship. In mid­-October, Roddy was elected to the Sewanee chapter of Phi Beta Kappa. Soon after, he received an invitation to interview as a finalist for the Rhodes. If successful, he would be Sewanee’s 27th Rhodes Scholar. Not a bad fall semester. Oh, and since hiring Dan Campbell as their new head coach, the Dolphins entered November having won two out of three games.

Roddy came to Sewanee from the Baylor School in his home city of Chattanooga. Recruited by Sewanee Men’s Tennis Coach John Shackelford, he quickly distinguished himself by applying for and being accepted into the Bonner Leader program, which allows students to earn work-study pay while engaging in community service. It’s a highly competitive program; 10 students are accepted each year out of an applicant pool of close to a hundred. Roddy, who had been active in community service as a high school student, settled into a role at nearby Grundy County High School, establishing and teaching an ACT-prep class and working with rural teens who hope to attend college. He has maintained his connection with Grundy County High throughout his four years on the Mountain, calling his work there “such a big part of what I do at Sewanee.”

Robin Hille Michaels, assistant director of community engagement at Sewanee, says Roddy is “probably the most structured student I’ve ever met,” adding that he is someone who carries himself like “a man on a mission.” Shackelford agrees. “He’s smart,” the coach says. “He’s a leader of the team. I haven’t really had to coach him in four years.” To Shackelford’s mind, the keys to Roddy’s success ­­on the court, in the classroom, and in the community are balance and a commitment to excelling at everything he does.

Roddy has made the most of his experience at Sewanee. During the summer after his sophomore year, he traveled with Spanish Professor Thomas Spaccarelli as part of Sewanee’s Summer in Spain program. For two weeks, Roddy and his fellow students walked the ancient pilgrimage route in northern Spain to Santiago de Compostela. He came to Sewanee thinking he wanted to major in Spanish. This trip, which he called “a formative experience,” cemented that decision. It didn’t stop him, however, from adding English to what would eventually be a double major, and then amending his program further with a minor in business.

After his junior year, Roddy took advantage of yet another Sewanee resource, which is where the Dolphins come in. Working with Sewanee Career Readiness, Roddy managed to find a promising internship in New York City for himself. At the last minute, however, that opportunity fell through. Already in New York for the summer, he turned to his coach, who knew a Sewanee alumnus in the New York area, a former tennis player as it happened. That alumnus not only set up Roddy with a new internship, he also invited the tennis star to stay with him and his family in their Pelham, N.Y., home for the entire summer.

The internship was with the sports website Scout.com. During his first week in the office, Roddy worked on data analysis and wrote some news stories. But as his second week began, his supervisor approached him to ask what was his favorite sports team. When he said it was the Dolphins, the supervisor asked if he would be interested in a paid position publishing the Miami Dolphins pages on Scout.com. Roddy jumped at the opportunity.

He remains publisher of the page to this day. In that capacity, he writes two articles for the site each week, and has hired three staff writers who work under him. He controls the page’s content, as well as its layout and design. He manages discussion forums, advertising sales, page subscriptions, and the Facebook and Twitter feeds for the Dolphin page. “Sometimes players will respond to my tweets,” he says. “That’s pretty cool.”

Finally, in his capacity as publisher, Roddy maintains a live discussion feed on game days. He meets with friends at the treehouse to watch the Dolphins play, using his laptop to respond to comments from fans all over Dolphin Nation. It is truly a labor of love for him, and at times a source of heartache. “Why? Why are you doing that?” he asks in response to another hapless sequence by Miami’s offense, in what would be a 33-­17 loss to the Bills. Then his fingers are clattering away at the keyboard again, as fans on the chat offer their reactions.

In all, he devotes about 15 hours to the publishing position every week, and would like to continue working at Scout.com after his graduation from Sewanee. He would even consider moving to Miami, where he could follow the team more closely. That is, unless he receives the Rhodes Scholarship. In that case, he will be spending the next two years at the University of Oxford. There, he hopes to study rural development and to supplement his scholarly work with hands­-on experiences in impoverished communities around London.

As Roddy’s time at Sewanee draws to a close, his possible futures are as varied and exciting as his career on the Mountain has been. Whether he’s studying for an advanced degree at Oxford or following the fortunes of a certain NFL franchise in South Florida, Roddy has plenty to look forward to—at least until the Dolphins’ next missed tackle.