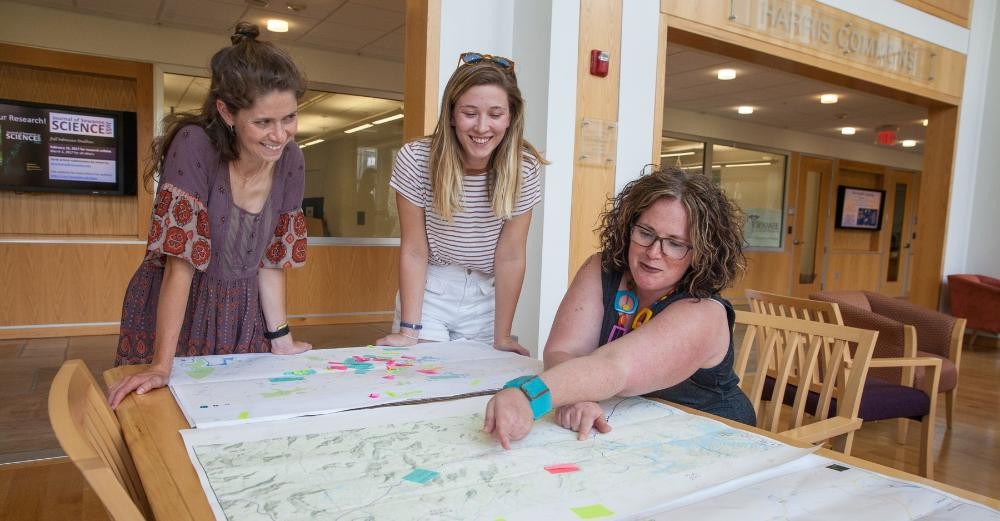 Anna Sumner Noonan C'17, Catherine Casselman, C'17, and Margo Shea pore over maps of the South Cumberland Plateau annotated with local residents' stories about places that are significant to them. Photo by Buck Butler

A Sewanee professor and her students collect stories about places on the South Cumberland Plateau to compile a rich topography of personal history.

W hen I die, God, will you lift me to heaven? If not, will you promise me this: Just lay me on top of Monteagle. That’s one place I won’t want to miss. —“Monteagle,” recorded by Vern Gosdin

Have you ever heard this song? The odds aren’t great that you have, even though the singer, Vern Gosdin was one of the great country singer-songwriters of the 1980s, with a string of Top 10 singles.

The song catches something important—places matter. And that’s the basic premise of the Places Project, a two-year effort by Margo Shea, a postdoctoral Mellon Fellow with the Sewanee-Yale Collaborative for Southern Appalachian Studies, and students she’s taught in her public-history courses.

Now, Shea and two student collaborators, Catherine Casselman and Anna Sumner Noonan, both C’17, are preparing to present their efforts later this month at the annual meeting of the National Council on Public History in Indianapolis.

The title of the presentation, “The Places Project: A Crowd-Sourced People’s Map of the South Cumberland Plateau,” is an accurate description of the product of the research, but the core of the project is human stories about the places that matter to people who live around here.

Shea came to the Collaborative in 2015 from Salem State University in Salem, Massachusetts, where she is an assistant professor of public history.

She says she soon noticed that a lot of the conversation she heard in Sewanee about the broader Plateau region was about “the pathologies that so often describe Grundy County. I wanted to change the conversation.”

“I just thought that people were being paraphrased, and I thought they ought to have a chance to use their own words.”

So Shea offered her students the opportunity to help memorialize the deep historical perspectives of the residents of the Plateau region.

When she started designing the project, “I was really jazzed up about crowd-sourcing,” Shea says. Her first idea was to make a Facebook post asking for people to write about local places that were special to them. The result was, to put it mildly, underwhelming: “About 30 responses,” she says. Clearly, what was needed were some real crowds. She and the students devised a new strategy: They would go where the people were—local festivals and county fairs.

It wasn’t always easy to get people to start talking, says one of the student interviewers, David Losson, C’18. “People were very apprehensive” at first, but asking about personally important places turned out to be the key to local history. “When you ask about places, you may get a life story, a ghost story, a family history … the sort of stuff that isn’t recorded in ‘official’ history.”

As a public historian, Shea was aware of the paradox of an outsider investigating local memories and connections to place. Her goal was to engage in research with, not on, local residents and to try to construct meaning and negotiate its broader and deeper significance together. “The process has been as important for me as the product.”

For Casselman, the project offered a ready-made opportunity to discover more about people she met regularly through her job at Stirling’s Coffee House, people who weren’t necessarily affiliated with the University. The result changed how she thinks about her campus home.

“I think as a student here, you see your surroundings in a very specific way.” For instance, Sewanee students think of the War Memorial Cross at the bluff end of Tennessee Avenue as a quintessentially “Sewanee place.”

But for one local woman she interviewed, the Cross has a deeply personal meaning of another sort: When she was a teenager, she attended a Christian volleyball camp. As part of the activities, she and her fellow campers were taken to the Cross and presented with a coffin, which was supposed to be “a place of putting your sins.”

“I wasn’t very happy about it,” the woman told Casselman, but “we were out there for an hour, and people were crying and confessing their sins, so this place would actually be the first place I really had to think about what I thought about Christianity and religion.” Now, she told Casselman, the Cross is where she goes to ponder her deepest beliefs, a place of self-examination.

Hearing stories like this “helps you understand how many perspectives there are” and how one’s expectations can lead to making unwarranted assumptions about other people, says Casselman.

Noonan, whose biggest role in the project has been analysis of the content of the stories, says the work has helped her to understand the importance of “creating a space where all stories can be heard and valued.”

For instance, one person recounted his deep attachment to a particular cove at the foot of the Plateau. His great-grandfather was buried there, and while the exact gravesite has been lost from family memory, he touches his roots when he visits the place.

Other places can recall tragedies. For instance, in 1981 an explosion in a coal mine near Palmer in Grundy County left 13 local men dead, the sixth-worst mining disaster in the United States after 1970.

“I guess the Mine 21 disaster is the biggest thing to happen in my lifetime around here,” a man named Paul who lives in Palmer told an interviewer. “I still remember the funeral. All closed caskets. There was no way they could have open ones, we were told, because of how bad the damage was.”

For Losson, participating in the project was an extension of an interest he’s had since early childhood, wondering about “what makes a place a ‘place,’ not just a location.”

Losson is grateful to the people he met “for participating and opening up.” The experience has “changed the way I thing about a lot of things … This is going to be a huge help to me going forward.”

Soon, the results of the project will enter the public domain. The researchers are in the final stages of creating a searchable database linking places, histories, and the emotional and historical frameworks they exemplify.

They are also designing a large quilt-like map of the places in the database, each one with a Velcro flap that can be lifted to read the remembrances associated with the place, a sort of giant Advent calendar. The database and the quilt/map will become displays at the Grundy County Historical Society in Tracy City.

In Vern Gosdin’s telling, there are more angels around than the ones Sewanee folks ask to travel with them when they pass through the University Gates. He apparently saw the Plateau as a refuge from his life as a musician in Nashville:

On top of Monteagle, they say, There’s angels flyin’ evry which a-way. One mile from Heaven; A hundred miles from Hell.