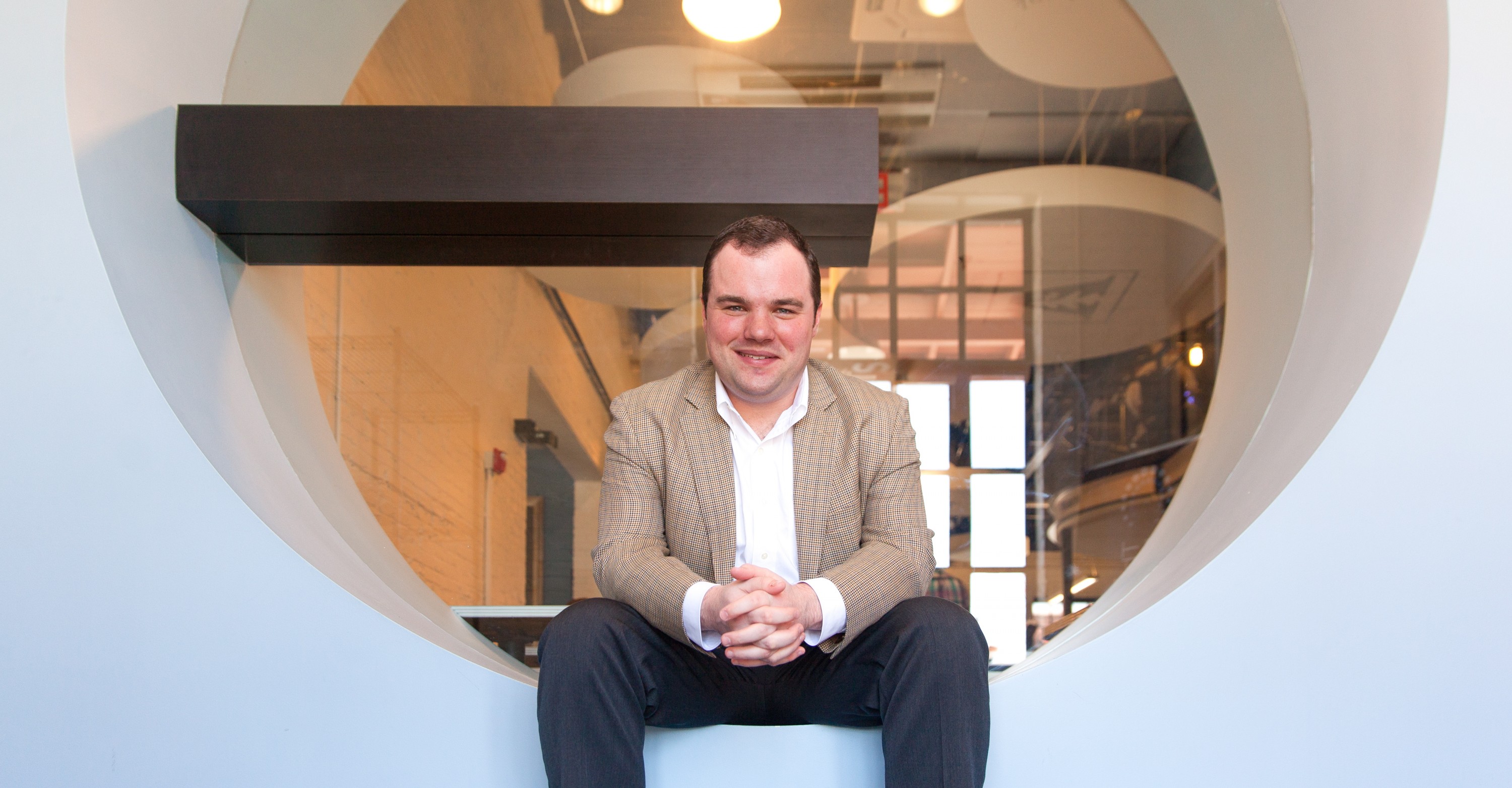 Chase Spurlock, C’09, and his biotech startup explore the mysteries of the human genome to provide faster diagnoses for autoimmune disorders.

"A re your eyes glazing over?” asks Chase Spurlock, C’09. Spurlock holds a dry erase marker in hand and stands before a detailed diagram on the whiteboard—a process description of DNA and RNA. He’s in his office in Green Hills, an upscale commercial area of Nashville, explaining the science behind a new company, IQuity, he has founded with business partners including Tom Aune, who was Spurlock’s major professor at the Vanderbilt University School of Medicine.

IQuity is a breakout company hoping to sell its first product in 2016, a powerful blood test that shaves years off the diagnostic process for autoimmune diseases like multiple sclerosis. At age 28, Spurlock has served as student chief of the Sewanee Volunteer Fire Department and as chair of the Honor Council, graduated Phi Beta Kappa from Sewanee, performed research in a biotech laboratory, completed a Ph.D. in microbiology and immunology from Vanderbilt University, joined Vanderbilt’s faculty, and is now CEO of IQuity. He is also remarkably cogent and persuasive, teaching a non-scientist about some groundbreaking molecular biology.

“DNA makes RNA and RNA makes protein,” explains Spurlock. “For a long time that was the mantra. You were taught to pay attention to RNAs that made protein, and we thought the rest of it was junk RNA. What we’ve found is that non-coding RNA—the stuff that doesn’t make protein—is much more important than we could’ve imagined. These RNAs have a powerful influence on proteins in spite of their inability to make the protein. Certain classes of RNAs can turn genes on and off, regulating what we call ‘gene expression.’”

Spurlock is particularly interested in what are called long, non-coding RNAs, or lncRNAs (pronounced “link RNAs”). “If you want to make your career today in molecular biology, lncRNAs are where you want to be,” he says. Researchers are finding that these RNAs are critical for regulating many biological processes. It’s a new area of biology that is receiving considerable attention. “Our group is on the leading edge of understanding the role of lncRNAs in the context of the immune system and autoimmune disease.”

“We’re in an era of big data in medicine,” says Spurlock. IQuity has a collection of thousands of samples from healthy patients, patients who have already been diagnosed, and patients who have exhibited symptoms but have not been diagnosed. Using next-generation sequencing, the company has amassed a tremendous amount of data that has allowed the researchers to construct profiles of gene expression in blood that construct an image of what is happening at a molecular level in patients with disease. “Leveraging the analytics we have built, healthcare providers can now look to a blood test and conclude with a great deal of certainty, ‘this profile looks like someone who has multiple sclerosis,’” says Spurlock. In other words, IQuity can discern early evidence of disease in the blood before it is easily distinguished through conventional means. “It’s a molecular portrait that allows doctors to make actionable decisions.”

Much of this work would not have been possible a couple of decades ago. The Human Genome Project, which was completed in 2003, mapped for the first time nature’s blueprint for building a human being. As soon as that was finished, scientists launched a follow up project called ENCODE (the ENCyclopedia Of DNA Elements), a project to define the functional elements of the human genome. Scientists at this point were past the conventional DNA>RNA>Protein and began considering the much more complex, finely controlled molecular relationships that are going on. “We are decoding the dark matter of the human genome,” says Spurlock—those elements without an already known function.

‌As a Sewanee student, Spurlock showed great promise as a scientist, but his focus was very different than it is today. “On the Mountain, I was doing field work that focused primarily on bugs and birds, which mainly stems from my time in the classroom with [Biology Professor] David Haskell. My molecular biology experience was very limited, but I was fine with that, and I wouldn’t have traded having the opportunity to explore the Domain for anything. What I discovered [during my time at Vanderbilt] is that I had a natural talent for basic research. At first, the learning curve was steep but it’s been a lot of fun.” In particular, Spurlock discovered he loved solving problems. “I love to be the guy who can solve problems and answer questions,” he says. “Lab work has the power to create and change the way you conceptualize life. In the lab, you live for little victories. You solve one problem and then you go to the next. Eventually, and with a little bit of luck, your findings coalesce into stories—and it’s here that you have the chance to make a mark on your field.”

Spurlock thinks of his story as a Sewanee story, which started during merit scholarship weekend in 2005 when he was a senior at the Webb School in nearby Bell Buckle. One of the speakers was Professor of Religion Gerald Smith, with whom he struck up a friendship. “Smith read from Dr. Seuss,” he recalls. “A couple of weeks later, Smith called me and said, ‘Spurlock, you need to come to Sewanee.’” It was an idea to which the young scholar assented, not only because of the personal attention but because he had already absorbed Sewanee’s first lesson. “Twain said in a city you only know a man’s crust, but in a village, you know him inside and out,” says Spurlock. “That’s one reason I wanted to go to Sewanee. I understood right away that it was going to be an experience that would lead to friendships and student-teacher connections that would be unmatched at other institutions.”

Spurlock’s conversation is sprinkled with literary references, obvious touchstones that shape his life. “Kierkegaard said, ‘purity of heart is to will one thing,’” he says “Smith told me that during a rural religion class trip to Orme, an old mining town down the mountain, and it’s always served as a reminder to be objective and to not spread myself too thin—as difficult as that can be at times.” Spurlock’s list of mentors includes Smith and Haskell, both of whom infected him with a love of learning. Spurlock also includes David Green, chief of the fire department, as another guide on his Sewanee journey.

Haskell remembers Spurlock as “an extraordinary member of the community. I particularly admire his intellectual curiosity and his work ethic. He continually probed theory and methodology, seeking both to understand and to extend the ideas that we were studying. He had great stamina, keeping up the pace of his research even as demands piled on from [community leadership]. Through all this he showed great concern for his peers, lending help where needed and gently mentoring younger students in our classes.”

In March, the Nashville Business Journal named Spurlock to its “40 Under 40” list of young professionals making names for themselves in the Nashville business scene. “Nashville is an incredible place to start a company,” he says. “We developed our test at Vanderbilt and I’m from middle Tennessee—I grew up in Murfreesboro. It was an intentional decision to keep innovation developed here in Nashville and not export it beyond our borders.”

Gratitude seems to be Spurlock’s natural state: gratitude for the friends who know him, the mentors who have inspired him, the partners who have brought expertise to IQuity, and the community that sustains him. IQuity is making a big splash, with $2 million in startup funding from private investors and bolstered by grant funding from the National Institutes of Health. Expect Spurlock to be looking beneath the crust and plumbing the secrets of our genome for decades to come.