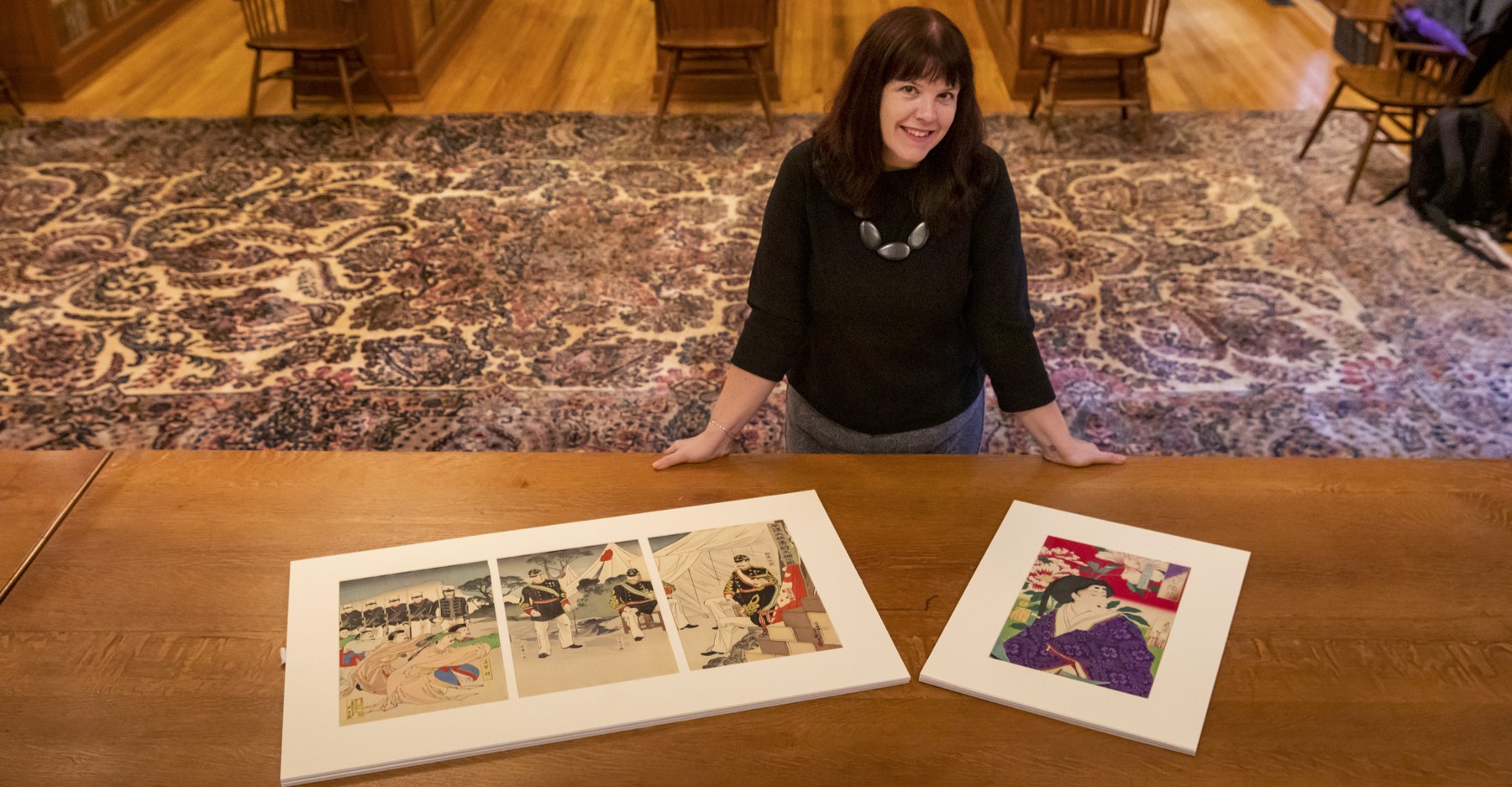 Assistant Professor of Art History Alison Miller closely studies woodblock prints from a fascinating period in the history of Japan and its monarchy.

Growing up in Chicago, Alison Miller looked forward to Tuesdays, the day the Art Institute of Chicago opened its doors to the public with no admission fee. “I loved going there,” says the assistant professor of art history. “I was fascinated in particular with 19th-century art and Impressionism.” After that early experience, Miller studied art history at Northern Illinois University and then as a graduate student at the University of Kansas, where she earned a Ph.D. Along the way, her fascination with the Impressionists transformed into an absorbing professional interest in Japanese prints, particularly of the late 19th century. That fascination was not so surprising as many 19th-century Impressionists were themselves influenced by the ukiyo-e tradition, a style of Japanese printmaking that was popular for centuries before the opening of Japan in the mid-19th century.

Miller reads Japanese woodblock prints the way geologists read maps or layers of rocks. “I could look at these all day,” she says, leafing through a book of reproductions, pausing thoughtfully over each page. “There are so many strands here. They are simple on the surface, but they are so much more complex and illuminate a fascinating history.” While traditional Japanese printmaking attracts many followers, most academics (and notably, collectors) focus on printmaking before the middle of the 19th century, when Admiral Matthew Perry’s “black ships” forced the Japanese government to establish more robust trading relationships with the West. The opening of Japan meant that Japan entered the modern world, and the images of courtesans, nightlife, and erotic scenes gave way to more modern imagery. Miller is one of a handful of people in Europe and America who study and write about the woodblock prints that came after the mid-19th century, the Meiji period in Japan.

“It’s all about modernity,” says Miller, standing in front of a woodblock-printed triptych of Chinese soldiers in traditional garb surrendering to Japanese soldiers in modern military uniforms. “The Meiji period is fascinating because the Japanese society transformed from a relatively insular place to a modern power—one of the great powers on the global scene—in just a few short decades.” Miller sees one important key to the transformation in depictions of public life, including depictions of the royal family, which helped construct an identity that was important to societal cohesiveness. “These woodblock prints were relatively inexpensive, so average people were able to acquire them,” Miller says. “The ubiquitous images helped transform ideas of modern life that enabled the entire society to change in short order.”

While the overall focus of Miller’s scholarship is modernity, the work has two different strands. What she calls “the empress project” is part of a nearly completed book: The Feminine Imperial Image in Japan, 1868-1952. The book examines the political significance of the images of the three modern Japanese empresses: Shoken (1849-1914), Teimei (1884-1951), and Kojun (1903-2000), focusing on how visual representations of them affected the construction of women’s gender roles in a broad social context. In an article published in Nursing Clio, a peer-reviewed blog, Miller writes, “Monarchy is concurrently derided as outdated and prized as timeless, yet the survival of this system shows that it is neither. The Japanese imperial household has remained as a symbol of power, history, and tradition due to its ability to change in response to social norms. Its traditions may be invented, but its popularity is real, and the policies, rituals, and public face of monarchy reflect our world in oftentimes conflicting ways.”

Leafing through the book of prints, Miller gives a thumbnail on the Japanese monarchy, the oldest continuous line in the world. The first Japanese emperors, in the 6th century A.D., were thought to have descended from Amaterasu, the Sun Goddess, and while imperial power waxed and waned over the centuries, the idea of the emperor remained a powerful through line in Japanese history. “When most people in the West think of a monarchy, they think of King Arthur or Queen Elizabeth, or Henry VIII,” Miller says. “In Japan, the imperial reality is much longer, and the emperor has a more complex role to play than in Western monarchy.” In her teaching and research, she is eager to change people’s perspectives, and the prints are an important cultural asset to advance that goal.

The other major strand of her work is what Miller calls “the silk project.” “The silk project shows how woodblock prints were utilized as a form of aestheticized oppression: women's labor was inexpensive, and crucial to Japan's industrialization,” she says. “Their low-cost labor was what drove silk exports.” In the 1870s, women made up 75% of the industrial workforce in Japan, and the sale of silk was a significant source of the foreign cash that laid the foundation for modern Japan, according to Miller. The prints convinced families to send their daughters off to faraway factories, and also convinced society that the factories were acceptable environments.

“I think it is also really important to broaden our notions of modernity,” she says, “to show how much of the modern world—not just in Japan, but obviously there—is dependent on the actions of women, who may not always be foremost in people’s minds as they are thinking about the modern world.”

Miller’s work has been supported by the Florence Tan Moeson Fellowship of the Library of Congress and an IES Faculty Research Abroad Grant. This semester, Miller’s prints class is studying the prints held in Sewanee’s special collections, some of which were purchased through grant funding. Then the students go on the road to view the Vanderbilt collection, and in March will travel to Minneapolis—a trip funded by a College Art Association grant—to view one of the foremost collections of Japanese woodblock printing in the United States.