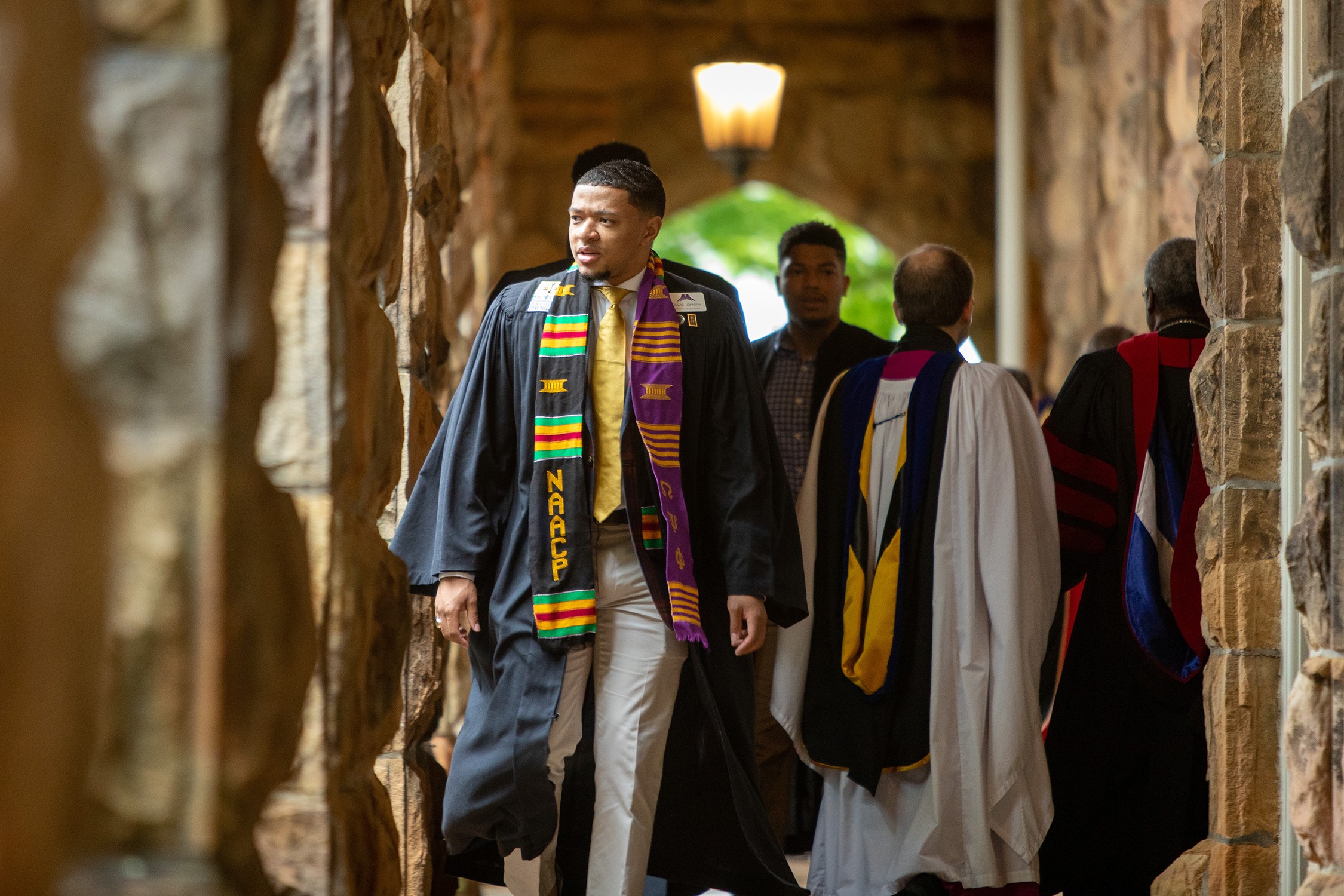 David Johnson, C'19, prepares to travel the world to find ways to help his own country heal.

David Johnson’s grandmother calls him “Chief.” It’s a nickname with roots going back to her father, Johnson’s great-grandfather, Charles Rawls. Active in the Civil Rights movement and a leader in his community in the Jim Crow South, Rawls had friends who first bestowed the nickname on him. A half-century later, while growing up in Brownsville, Tennessee, about an hour east of Memphis, Johnson, C’19, took up his great-grandfather’s legacy of leadership and advocacy. Chief had returned.

This fall, Johnson, one of only 41 students in the United States to be awarded a Thomas J. Watson Fellowship this year, will embark on a yearlong solo international trip to research transitional justice. Heading first to Belfast, Ireland, Johnson will then visit Germany, Rwanda, South Africa, Chile, and Peru to investigate how each country has examined and acknowledged their histories of injustice. It’s a journey for which Johnson has, in many ways, been preparing for years. But the road to becoming a Watson Fellow first started with rejection.

Johnson initially heard about the Watson Fellowship in 2017. One of his fellow Honor Council members, Mark McAlister, C’17, had just been named a recipient. As the news spread across campus, Johnson’s interest was piqued.

“The idea of it sounded pretty cool. And then I saw ‘one-year exploration project outside of the United States, funded,’ and I thought, this sounds crazy,” says Johnson. “You’re not with a structured program while you’re doing your project. It’s an experience, and a foundation gives you money to go explore.”

Open only to graduating seniors, it wasn’t something Johnson, then a sophomore, could apply for at the time. He wasn’t sure if it was a good fit for him anyway. An unsupervised year abroad was maybe too unstructured, so he moved the idea to the back burner. As a member of the basketball team and the Honor Council, a member of the University’s Slavery, Race, and Reconciliation Project working group, and a six-time member of the NAACP’s Youth & College Division, Johnson’s plate was full.

By the fall of his junior year, the politics major was beginning to think about graduate school. When he learned about the Harry S. Truman Scholarship for graduate education, Johnson decided to apply. As part of the requirements for the scholarship, he would have to create a mock public policy proposal. Enrolled in a world politics class at the time, Johnson was learning about the current political climate in South Africa and its history of apartheid.

“As we’re learning about [apartheid], I’m thinking how similar it is to the United States,” he recalls. Digging into the topic deeper with his professor, Johnson learned that South Africa had created the Truth and Reconciliation Commission to formally recognize the harms done by its system of institutionalized racial segregation.

“I drew the parallel that that didn’t happen in the United States, and I wondered why,” he says. “Why hadn’t we grappled with our past in terms of enslavement, in terms of Jim Crow and its legacies? It hadn’t happened, but it could happen in the future.”

The idea for his Truman application began to take shape. Johnson designed a policy proposal around a truth and reconciliation commission to address the enslavement of African Americans and its legacy implications. In order to move on to the scholarship’s national round, he would first have to submit his policy to a committee of Sewanee professors for their review.

Having collaborated with several professors on his application before submission, Johnson was surprised and disappointed when the committee informed him his application would not be moving forward.

“After I got that news, I was pretty saddened and frustrated,” he recalls. “I was told the policy proposal wasn’t feasible and needed more work.”

Not one to feel defeated for long, though, Johnson soon found an opportunity to turn rejection into redemption.

“What led me to the Watson was the failure I had applying for the Truman,” says Johnson. Shortly after his policy proposal’s dismissal, he spotted a poster on campus for the Watson Fellowship. The idea he’d filed away a year earlier came rushing back. What hadn’t seemed right for him then now seemed like the perfect fit.

He started reaching out to professors, sharing his idea of a project about transitional justice in the United States. Through his coursework and his work on the Truman application, Johnson had begun to immerse himself in learning about other countries with histories of injustice. Religious conflict in Belfast, nationalism in Germany, genocide and ethnic cleansing in Rwanda—these were places where attempts were being made to acknowledge a violent past head-on in pursuit of a different future. If these cities and countries could do it, would it be possible for the United States?

Johnson initiated conversations in different departments across campus, investigating the viability of his project. Was transitional justice in the United States an idea worth exploring? What could the United States learn from other countries that have already begun this process? Could he get this idea through the Watson Fellowship committee?

By the time Johnson presented his project to the Sewanee committee, he’d been at work on the idea in some form or another for nearly two years. He’d even begun outreach to contacts in the countries he wanted to visit to lay the groundwork for future research.

“I had been working on this project for so long and had the background that was attached to it so that when people would ask me questions, I could defend it,” he says. “I could position myself and the project as something vital to my growth but also to the country’s growth.”

After making it through the first round at Sewanee, he presented his project again during a national interview. The rest of the fall semester went by without a word from the committee. As the months rolled by in the spring semester, Johnson was getting nervous. He would be graduating in two months and still didn’t know what he was doing next. He checked the Watson Fellowship’s website again and again.

Then one day in mid-March, after most students had left campus for spring break, Johnson pulled up the site again. This time, the 2019 recipients had been announced. There was his name.

In the middle of an empty dorm, Johnson dropped to his knees and started screaming.

“I started praying, ‘Thank you, thank you, thank you!’ This had been something I had started sophomore year. It was just crazy,” says Johnson. “It motivated me to make sure I use this year not only for myself but for others who aren’t fortunate enough to get a fellowship like this. It’s humbling.”

Like his great-grandfather Chief, a man dedicated to the pursuit of equality, this Chief sees a bigger picture in all of this, too. He sees where things can be better—where the country can do better—and he’s willing to find out how to make that happen.

He’ll spend a couple of months in each country, connecting with universities and nongovernmental organizations to learn how the country is grappling with its past. He’ll interview Ph.D. students, visit conflict sites, and observe how each country’s history is taught in classrooms. And he wants to build relationships, make friends, and immerse himself in other cultures.

While it is not a requirement of the Watson Fellowship to compile or present a final project at the conclusion of the year abroad, Johnson sees his upcoming work, which he plans to share in real-time through social media, as part of something more to come in this country. It starts with a conversation. He hopes it moves toward a reckoning.

“I just want to make sure I make the most of [this time] and present [my work] in a way that everybody can see what’s going on around the world,” says Johnson. “I want people to see how we can be like [these countries] in terms of acknowledging our past. I know my project will be going directly into something America needs right now.”