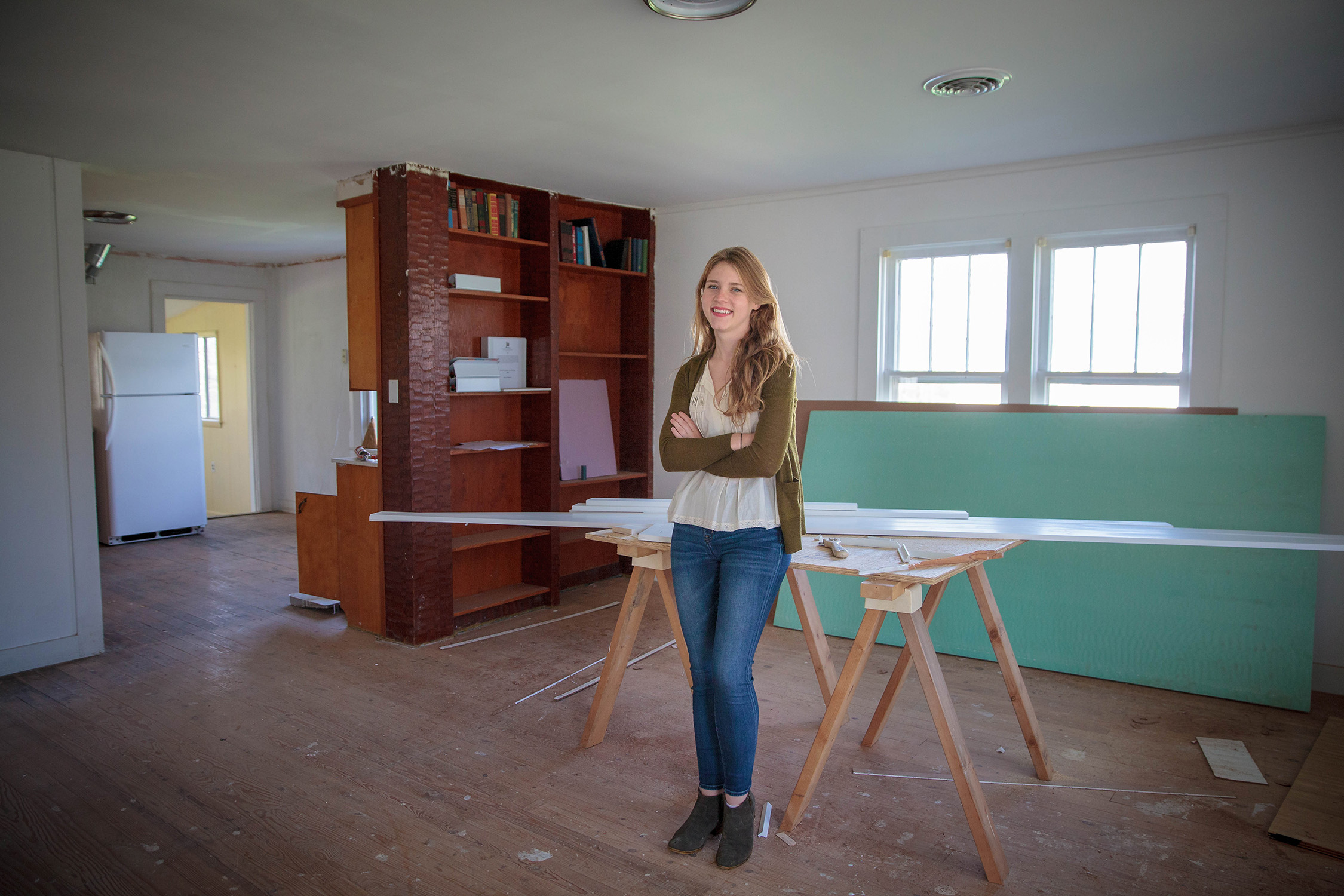 Emmie Chambers in the building she's helping transform into a new wing of the Beersheba Springs Medical Clinic. Photo by Buck Butler

A student’s years-long involvement with a local rural medical clinic fosters deep connections to people and place, and prepares her for a future career.

On a sunny Saturday in March, the Beersheba Springs Medical Clinic is buzzing with the sound of circular saws, clanging shovels, and chatter. Emmie Chambers, C’18, and Kelly Baggett, chair of the clinic’s board of directors, greet incoming volunteers. The group of community members from Beersheba, brothers from Sewanee’s Sigma Nu fraternity, and others are busy tearing up linoleum, landscaping the front of the clinic’s new building, and renovating its bathroom to meet standards required by the Americans with Disabilities Act. In the main room, two sheets of plywood and sawhorses form a makeshift table that holds the day’s planning materials—coffee cups and carpenter’s pencils. When renovations are complete, a broad, solid dining table will take its place as the center of operations for health classes and other new initiatives shaped by the clinic’s holistic approach.

As a Bonner Leader, Chambers has been an integral part of the effort to transform the new building, a house donated by the neighboring Church of Christ, into a new wing of the rural medical office where she has interned for almost all of her college career. The Beersheba Springs Medical Clinic is the only privately funded free clinic of its kind in Tennessee and plays an important role in the overall health of the Beersheba Springs community.

The Bonner Leader Program embeds students in local internships, often to do this kind of “capacity building” work: helping organizations fulfill their missions in sustainable and context-wise ways. At the Beersheba Clinic, the addition of the new building is a step toward further centralizing essential medical services in the community. A diabetes health and education seminar is already planned for the fall, which will help bolster the clinic’s focus on preventive health, education, and well-being.

As the story goes, the clinic was dreamed up by a small group of neighbors sitting on a porch one evening. They gathered because they just had to do something after a friend with acute sinusitis sought treatment but encountered steep medical bills and labyrinthine paperwork. The absence of a medical home for this Beersheba resident and others, some without vehicles for the long drive to care and others with uncertain medical insurance coverage, was a gap that needed to be addressed.

Their solution was the Beersheba Springs Medical Clinic, founded under the leadership of Dr. Garrett Adams, which provides free care for every one of the more than 2,000 patient visits per year. Before the clinic opened, many local patients faced the impossible choice between going without treatment and incurring overwhelming medical bills. Now, as Executive Director Alison Gower says, “People who need care can come in to the clinic and be treated with dignity and respect.” As Adams says, the clinic is truly “of, for, and by the community of Beersheba Springs.”

In 2010, the clinic opened in a house retrofitted as a medical office. There, hospitality always comes first. It’s a place that “feels more like a home than an institution,” Gower says, complete with a kitchen and garden, tended by community members and Sewanee students and faculty, that blooms out back. It’s the kind of place where patients are greeted by name and deep relationships are developed.

The clinic’s emphasis on hospitality is part of its holistic, on-the-ground approach. Though Grundy County experiences economic and health challenges found elsewhere in Appalachia, a whole network of health providers and initiatives are part of a concerted effort to improve health outcomes there. As one collaborator, the Beersheba Clinic insists that improved health takes place one office visit, one patient at a time—and it all starts by knowing your neighbors. When Office Manager Renae Hobbs answers the phone, she often knows who’s calling before they say their name. The work of improving health is, as Gower asserts, “all about building relationships.”

Chambers has spent a large part of her time at Sewanee working as a Bonner Leader and commuting weekly to Beersheba. She is quick to tell you that the clinic staff and patients are like her second family. “They still have postcards from my semester abroad on the refrigerator, and graduation is on the calendar hanging in the clinic.” Chambers is a prospective medical student, and the hands-on, multispecialty work at the clinic has provided her the kind of deeply valuable preparation that medical schools are looking for. “On my first day, Norma Sparks, a certified physician assistant, had me talking with patients and taking vitals,” Chambers says. Now, Chambers regularly contributes to the intake and treatment process.

As a sophomore, Chambers began developing the clinic’s patient assistance program by collecting information on how and where to get affordable medications. Though there’s now a website with that information, the program addresses another common barrier in rural areas—technology access—and, in doing so, offers patients access to centralized information in a trusted place. Now, Chambers has effectively recruited volunteers for the renovation project and has played a role in securing grant funding for the work. Adams says, “Emmie has a deep understanding of the Beersheba Clinic’s mission.” Gower agrees: “Out of a strong alignment with that mission, she knows that small tasks support greater work.”

Through her work this year, Chambers has a role in the bigger history of the clinic, along with alumnus John Clark, C’82, a Chattanooga area real estate developer who saw a symbiotic connection between the clinic’s renovation project and the mission of the Carpenter’s Fund, his charitable organization. Both organizations seek to improve the quality of life in communities where resources are scarce. With experience renovating churches and community centers, Clark jumped at the opportunity to support an organization with such strong community support.

Clark also believes the University’s efforts to engage students, faculty, staff, and alumni with the surrounding area are vital to a robust liberal arts education. “At the University, we want to build complete citizens,” he says. Making connections in the community by fostering a philanthropic spirit is an avenue in student learning and development filled with possibility. The collaborative work in Beersheba Springs, fueled by a group of neighbors, has engaged Sewanee student volunteers and interns, alumni, faculty, and staff alike as they have invested their time, talent, and resources in pursuit of the clinic’s mission. All of this work, too, has been amplified through the University’s partnership with the South Cumberland Community Fund, a local philanthropic organization that seeks to improve the quality of life across the plateau.

For Chambers, engaged work outside the classroom has fueled learning inside the classroom, as she has undertaken one of the central challenges of the liberal arts: making connections across the curriculum. As an English major and biology minor, this has meant taking, for example, Molecular Cell Biology and a class on Shakespeare at the same time. “I remember writing a paper on portrayals of mental illness in Hamlet while studying disease on the cellular level,” she says. “It helped me learn that mental health is a complex interaction between our ‘souls’ and circumstances.”

As part of her pre-health pathway at Sewanee, Chambers opted to intern at the Beersheba Clinic last summer through a program co-sponsored by the Office of Medical and Health Programs and the Office of Civic Engagement. The program places students at one of three local clinics to better understand public health concerns through the lens of individual patient care. The summer program offered Chambers a deeper immersion into the Beersheba community. Over lunches of sandwiches with fresh tomatoes from the clinic’s garden, she solidified relationships with the all-female staff that are shaping her sense of calling and goal of working in a free clinic.

Next year, Chambers will be completing classes required for medical school while she pursues a recommendation from Sewanee’s Health Professions Advisory Committee, the gold standard for Sewanee students applying to medical schools. Chambers is planning to apply to schools with an emphasis in rural medicine. This additional year is a kind of affirmation of Chambers’ discernment and professional preparation as a Bonner. “My priority has always been the clinic,” she says. “Beyond classes, I’ve always thought there was something bigger to engage with while at Sewanee.” That something bigger has been key to understanding the connections between classroom, community, and calling.

“What makes a good doctor is realizing people are human and have stories,” Chambers says. “We might prescribe healthier eating and exercise to someone who comes to the clinic with high blood pressure, but without a conversation, you would never know that their blood pressure was influenced just as much by stress.” Addressing those barriers, she explains, is just as important as treating the body.