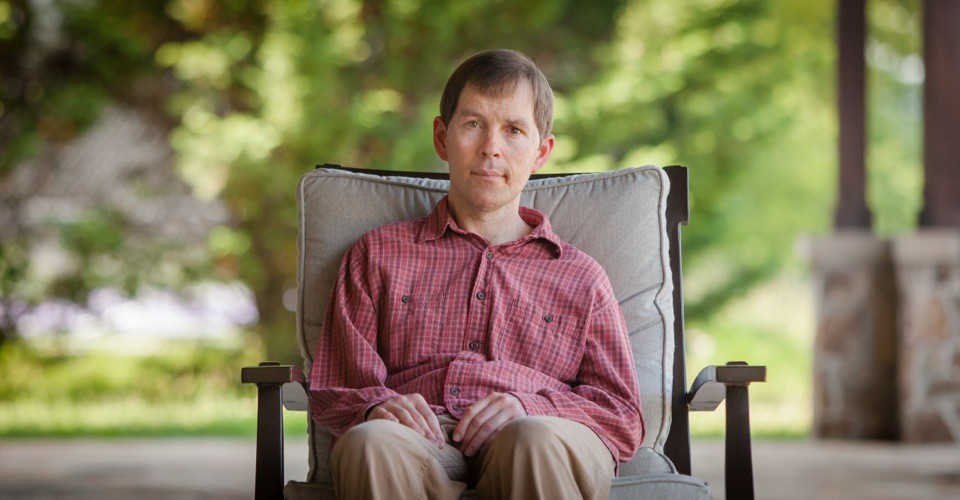 Climbing Out of the Well

A near-fatal car accident and a botched surgery left Clay Byars, C’97, paralyzed from the eyes down. In a new memoir, he recounts his harrowing journey back from a life trapped in his own body.

C lay Byars is at the bottom of a well, alone. There is no opening at the top and only a small window high above to let light in. There is no escape. He is trapped. When he wakes from his nightmare, there is no sigh of relief that it was only a dream. He does not roll over and lull himself back to sleep with the peace that in the morning tonight’s nightmare will be just a distant memory. Lying there, he cannot move his arms or his legs. He cannot speak. His mind, alive and awake, knows what his body doesn’t. He is trapped.

In Byars’ debut memoir, Will & I, which hits shelves later this month, he takes readers on a two-decade-long journey that begins in Sewanee following a deadly car accident. The accident sets in motion a series of events that is unpredictable and yet seemingly inevitable, sending the once almost identical paths of Clay and his twin brother, Will, in separate directions forever.

Both graduates of the University—Will in 1995, Clay in 1997—the Byarses have spent more than half their lives trekking to Sewanee from their hometown of Birmingham, Alabama. For Clay, it’s like a second home. When he returned in 2009, it was to begin work for a master’s degree in creative writing in the Sewanee School of Letters graduate program.

It was in the School of Letters, under the tutelage of his professor, friend, and fellow Sewanee alumnus, John Jeremiah Sullivan, C’97, that Clay began writing Will & I in earnest. Over the next six years, work on the book would take Clay from his home in Shelby, Alabama, to Wilmington, North Carolina, and points in between.

On the evening of Oct. 2, 1992, Clay, then a 19-year-old college sophomore, along with two friends, was headed from Monteagle to Sewanee along U.S. 41A. As the three made their way back to campus, an oncoming car drifted into their lane. To avoid a head-on collision, the driver of the car in which Clay was a passenger veered to the left. The other driver swerved back into her lane, hitting Clay and his friends head-on. Clay barely survived the accident; the driver of the other car died on the life flight they shared to a Chattanooga hospital.

In the months following the accident, all of Clay’s injuries healed, except one. Nerve damage to his right shoulder prevented him from bending his elbow. Opting to undergo an experimental neurological procedure that might restore movement to his arm, Clay traveled to New Orleans for surgery. When he returned home to Birmingham with a clean bill of health and a 60 percent chance of regaining mobility in his arm, his mother exclaimed, “I’m so happy! Things are back to normal.” His grandmother said, “Our worries are finished. You have made it.” Only, for the Byarses, the worries were far from over—and normal as they once knew it was gone forever.

Clay suffered a massive brainstem stroke a week after surgery, essentially leaving him trapped in his body. The surgeon had nicked an artery during the procedure, and a botched repair job caused a blood clot to form at the base of Clay’s brain. Locked-in syndrome leaves individuals paralyzed from the eyes down. The brain, and all its cognitive abilities, however, is unaffected. Once an avid hiker and outdoorsman, Clay was now fully aware of life around him and yet unable to participate in it.

Will became Clay’s pulse on the outside world. Both 20 at the time of the stroke, Will remained in school at Sewanee. There were still exams to take, parties to attend, and girls to date. He visited Clay whenever he could.

Clay and Will speak the language of twins, which is to say they speak without saying any words. There is an element of mind reading between them that transcends logic or explanation. In Will & I, Clay, from his newly paralyzed state, describes seeing Will for the first time immediately after the stroke. Will enters the hospital room, assesses Clay without saying anything, and then walks out. It’s a scene that could make any non-twin uncomfortable, the seeming absence of compassion or sympathy for a loved one in trouble. But Clay views Will’s actions without judgment and with complete unspoken understanding. “He knew that I was conscious and trapped,” Clay writes. “And unless he could somehow get me out of it, I wanted him to leave, too . . . The feeling was: at least one of us can get out.” The asymmetry of their once nearly identical lives seemed only to deepen their telepathy.

Against all odds and prognoses, Clay’s condition began to improve. Weeks turned into months, months into years, and he reached infant-like milestones for the second time in life. He learned how to walk. He spoke his first words again. He started taking singing lessons to regain control over his speaking voice. He joined a gym to improve his stability. He returned to slow hikes outside, breaking bones and enduring countless stitches after multiple falls. The recurring nightmare of being trapped in a well stopped.

During this time, as his speaking voice remained fragile and new, Clay also began to find his voice on the page. He says he knew taking up writing meant the beginning of a new life, “one in which I would no longer try to talk myself out of reality.” Returning to Sewanee to complete his undergraduate degree, Clay threw himself deeper into the writing life, calling it a “healing obsession.” After graduation, he began work on a novel about the accident and stroke. “I knew it didn’t work,” Clay writes in Will & I, “Parts did, but basically, nothing held it together. It wasn’t a story so much as an account.” The novel was shelved.

When Clay finally returned to work on Will & I, he realized it could no longer be a novel. It must be his memoir. And what manifested was not a story about Clay and Will, but rather Clay and his will: the will of the body, the will of the mind, the will of the spirit. What Clay’s novel couldn’t do that Will & I does is provide Clay’s personal, critical, and unsentimental examination of what it means to outgrow fear when there is nothing left to lose, how to find choice when it feels like every option has been stripped away, and how transformation arrives in moments of surrender.

Following his stroke, when doctors still weren’t sure he’d survive, Clay had a “mystical experience, for lack of a better word.” It wasn’t religious or near-death, but something more concrete. “I knew something had happened, but I didn’t know what. I thought for the longest time, did I imagine that? But ever since it happened, it’s guided my whole life.” In writing Will & I, Clay understood that this experience in the hospital was the framework upon which the memoir had to rest. “The experience felt both like I’d willed it and like it had come out of nowhere,” he writes. “I became my will—there was nothing holding me back anymore—but my will was more than me.” Paralyzed from the eyes down, Clay was free.

In 2014, Clay spent several months in Wilmington, North Carolina, working out of Sullivan’s home, meeting there each day to write and edit the manuscript. “The main thing Clay and I did editorially was figure out there were two books in one as he was writing. ... [Manuscripts] grow tumors. They also grow flowers. Your job is to figure out the difference,” Sullivan says of the editing process and the pair’s collaboration. “I’ve rarely had a more gratifying experience with a writer.” As the editing process came to a close, Clay returned to Shelby. There, he turned to another Sewanee alum and literary agent, Amy Hughes, C’97, who sold Will & I to Farrar, Straus and Giroux in 2015.

Now 43, Clay and Will have full and different lives. Will is married with three daughters and lives in Birmingham. Clay is an assistant editor for Narrative, a literary magazine out of San Francisco. He lives with his two dogs on a small farm about an hour from his brother but makes the trip to Birmingham several times a week for family dinners.

While their physical similarities today are subtle, it’s clear their likeness runs deep. It’s almost a shared consciousness, a metaphysical collaboration. They talk to each other with their eyes, sometimes leaving outsiders wondering if they’re interrupting a conversation they can’t hear.

For Will, this moment—the release of Clay’s book—is long overdue: “It’s been a 20-year project. I’m just glad it’s finally getting published.” But for Clay, recovery or no recovery, book or no book, everything was settled in that mystical experience in his hospital bed over two decades ago. In what he calls his “willing elimination of options,” he writes, “It had never been me against anything. It dawned on me not that everything was going to be okay, but that everything was okay.”