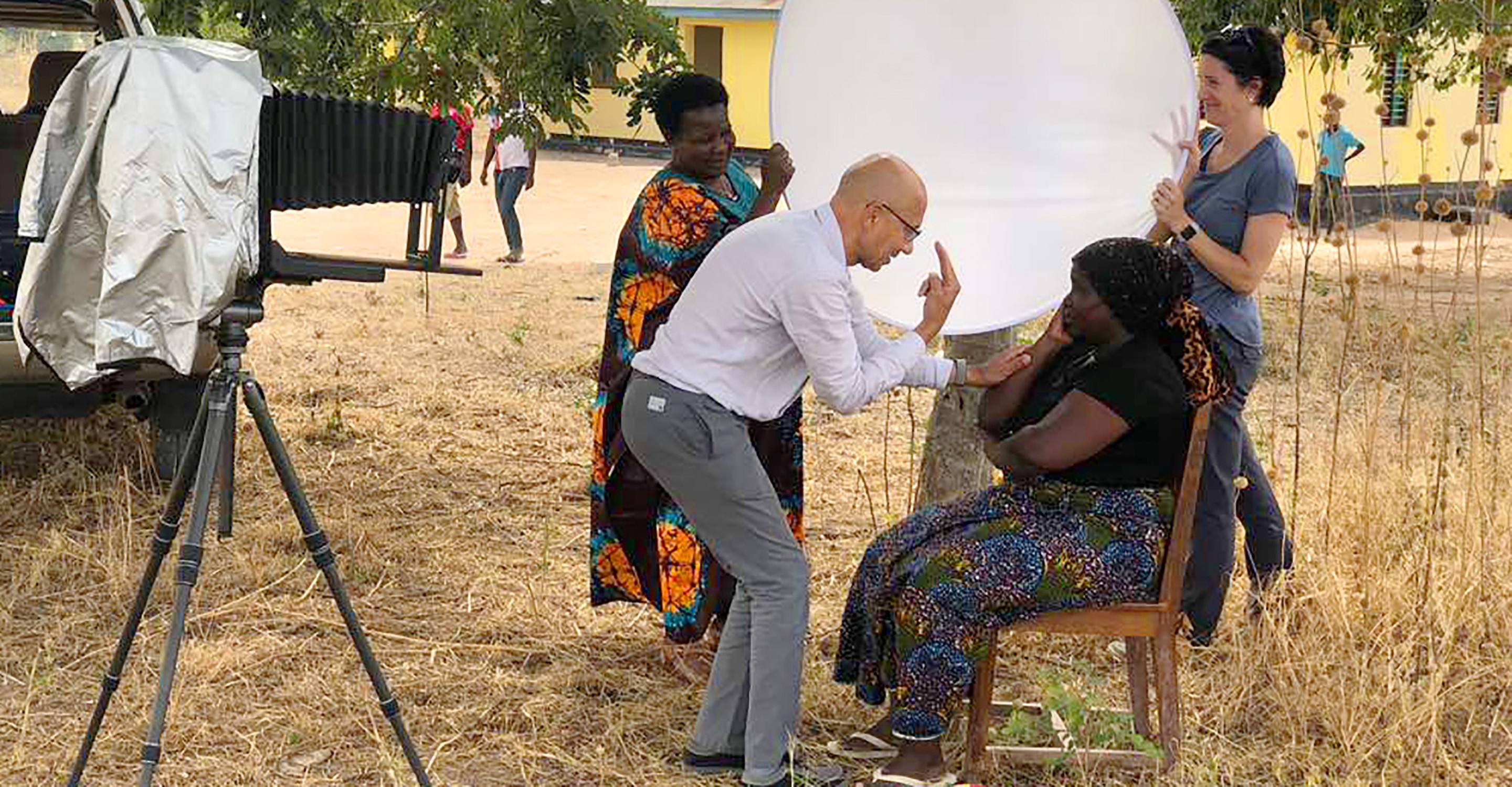 Sarah Mwaga (left) and Rachel Malde, C'00 (right), assisting Pradip Malde as he sets up for a portrait of Savela Stephen Sanda, an anti-FGM activist, in Mbalawala village, near Dodoma, Tanzania. Photo by Richard Mwaga

In March 1970, Pradip Malde, now a member of the art faculty at Sewanee and an internationally acclaimed photographer, left his family home in Arusha, Tanzania, to return to the elite Anglican boarding school in India where he and his younger brother were students.

The Malde family enjoyed a comfortable life in Arusha, a place he describes as a cosmopolitan town with a rich cultural and social life among the Anglo-Indian elite of the place. Malde attended an Anglican school in Arusha before being enrolled in 1969 at St. Paul’s School in Darjeeling, India, an international school in the Himalayan foothills that traces its origins back to the British East India Company—the predecessor of the British Raj.

Only when he and his brother traveled to Bombay (now Mumbai) in November 1972—the first leg of a planned trip back to Arusha—did he get the first inkling that something had changed.

He had expected to overnight with a local guardian and then fly out to Tanzania, but plans had shifted, and three days later the brothers were on a flight to Zurich. Only upon being reunited with his family did he learn they had suddenly become refugees—fleeing Arusha as a wave of anti-Asian sentiment spread across East Africa.

The family’s decision to depart Tanzania was not taken lightly. Friends in government had warned his father that he was soon to be arrested because he had vociferously resisted the government’s move to nationalize his photography business.

After an interlude in Spain, where wealthy friends put one of their holiday homes at the family’s disposal, they emigrated to Britain, where Malde completed his education at a Friends school near Cambridge followed by an undergraduate degree in photography and a master’s degree in design from the Glasgow School of Art.

When he arrived in the United Kingdom, Malde did not identify as a refugee, but the displacement became, according to him, an “experience of loss that played out in my work much later.”

As for Tanzania, he never wanted to return: “I just locked it out.”

Forty-six years later, though, he did return, as part of a delegation of Sewanee faculty seeking to build the University’s ties with academic institutions and nongovernmental organizations in the region. The journey, he acknowledges, was overwhelming—from the moment he stepped off a late-night flight to Dar es Salaam, the country’s largest city, and sniffed the air. He would return again and again.

Funding for Sewanee’s three-year African research and reconnaissance project came from the University’s McCrickard Faculty Development Fund, a special fund set aside for projects that would not meet the normal requirements of awards for faculty research but that have great potential impact and an opportunity to generate significant recognition.

Amy Patterson, a professor of politics and specialist in Africa, was the lead for the grant, and over three summers, starting in 2014, she and 12 other Sewanee faculty made a series of research trips to Uganda and Tanzania.

She had learned of St. John’s from the Rev. Dr.  Robert Hughes, for many years a professor at the School of Theology who, after retirement, taught two semesters at Msalato Theological College, the Anglican seminary linked to St. John's.

Sewanee and St. John’s have recently signed a memorandum of understanding to build cooperation. Additionally, Sewanee students have, for the past two years, served as interns with the Anglican Diocese of Central Tanganyika, which is closely linked with St. John’s.

When Malde accepted Patterson’s invitation to join the 2016 delegation to Tanzania, he had no definite plans other than to seek out potential internship sites for Sewanee students.

Patterson was well aware of Malde’s work in Haiti on how photography could be used to address complex and troubling issues, and she says she invited him because she thought he might find an interesting project, though she doesn’t recall being particularly aware of Malde’s long and complex history with the country.

On her initial visit to St. John’s in 2015, she had been introduced to Sarah Mwaga, the founder of the Anti Female Genital Mutilation Network (AFNET), a Tanzanian nongovernmental organization that has pioneered campaigns in the country against female genital mutilation, also referred to as female genital cutting (FGM/C).

Female genital cutting is a traditional practice that has been widespread across much of sub-Saharan Africa. Since the 1990s, activists and the World Health Organization have campaigned to end the practice.

FGM/C has attracted global concern, but despite being declared illegal in many of these countries, the practice continues.

When the Sewanee delegation arrived in Dodoma, Patterson made sure to introduce Malde and Mwaga, and the two began a continuing conversation about Mwaga’s work. At one point, Malde recalls, Mwaga revealed that for years she had been collecting the cutting tools used by ngaribas (Swahilli for “circumcisers”) who had renounced the practice. They had a moment of mutual awareness that they had found their project. “That’s the key that will open the door,” Mwaga said.

Earlier this year, this project, in turn, led to Malde being selected as one of 173 recipients of a John Simon Guggenheim Foundation Fellowship. The fellowship is among the most prestigious American recognitions of academic or creative talent.

Fellows receive stipends to pursue specific projects, and, like the names of the judges, the amount of individual awards is not announced. In a social moment when “transparency” is a virtue, a Guggenheim Fellowship is an anachronism.

So is Malde, with his Anglo-Indian heritage, his Received Pronunciation English diction, and even his favored photographic tool—a large view camera that he uses to make platinum-palladium prints that are the lineal descendants of caloptypes, the original process of photographic reproduction.

In 2017, Malde, then on sabbatical leave, received a University research grant and returned to Tanzania to continue the collaboration, where he began making images to document the practice.

Over a 14-day period, he and Mwaga traveled 1,000 miles to meet and photograph former ngaribas and women who had undergone the procedure. When he returned to Sewanee, he says, “I knew I had to apply for the Guggenheim, and the project had to be a book.”

This summer, Malde made his third visit to his homeland, traveling this time with his wife, Rachel—also a photographer and teacher—to continue his collaboration with Mwaga, this time with the support of the Guggenheim Foundation and a fellowship from the Appalachian College Association.

The project, entitled “From Where Loss Comes,” will include both photography and commentary based on the interviews they conducted and will be published as a book. How and when he will exhibit the prints themselves is still to be determined.

The photography juxtaposes images of the organic world in which the cutting rituals are practiced, and stark reproductions of the cutting tools from Mwaga’s collection. Malde deliberately photographed the tools “to look like monoliths,” while the photographs of the women and their environments make the toll of this ritual palpable.

The photographs have an emotional resonance that is heightened by the means used to capture the images and the process used to make the prints.

Malde traveled in Tanzania with an eight- by 10-inch view camera, similar in many ways to the apparatus used by Matthew Brady to photograph the American Civil War, and more recently by modern masters of portraiture and landscape. View cameras have produced many iconic photographic images, among them works by Imogen Cunningham, Edward Weston, and Ansel Adams. The high resolution of the large negatives these cameras produce captures levels of nuance unavailable from images made by smaller formats.

Once the negatives are processed, Malde’s technical virtuosity in printmaking comes to the fore. Malde and the British photographer and chemist Mike Ware are widely recognized among fine art photographers for their development of a modern method for producing platinum-palladium prints, which are regarded as the ultimate for fine-art photographic printing. The resultant prints are extraordinarily subtle in their tonal qualities and do not suffer from degradation over time.

I visited Malde in his studio one recent August afternoon. He was not long returned from Tanzania. The camera, a formidable box-like device, was resting on a worktable just past the studio entrance.

Making photographs with the camera is arduous. His kit for Tanzania included the camera, a tripod, and individual film packs for each image he would shoot, all packed in two heavy backpacks. He could expose only 16 sheets of film a day before returning to a makeshift darkroom to unload and reload the film packs.

During this summer’s 14-day photography expedition, Malde made 31 photographs, exposing two sheets of film for each image. His 2017 trip had produced a similar number of photographs.

In a time when digital photography is ubiquitous, why work this way? Malde told me he felt the subject matter demanded this approach.

“A large camera and negative renders not only very high-resolution images, but also brings a special sense of event to the moment. I wanted that gravitas to resonate with the subject at hand: the loss and lifelong transformation of cutting.

“I want,” he added, “to be familiar with loss and how we work our way through the process.”

In explaining his goals for the project to the Guggenheim Foundation, Malde asked some questions he wanted the work to explore: “What are we willing to give up, as individuals, in order to be included and escape solitude? What landscape of personal and cultural priorities is at work? What does a person have to lose in order to remain a citizen?”