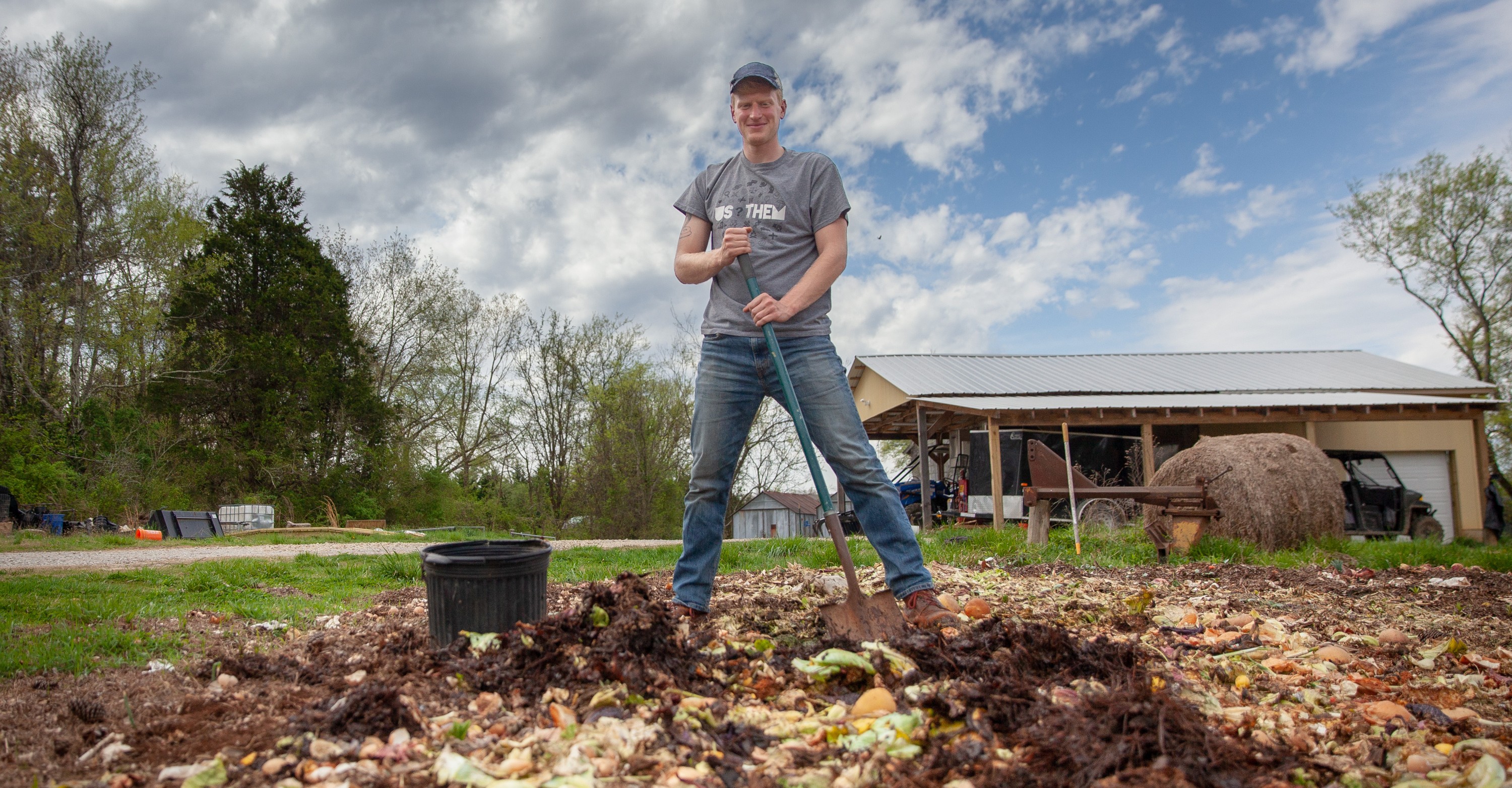 The King of Compost Mountain: Chris Hornsby atop a pile of food waste from Sewanee's McClurg Dining Hall. Photo by Buck Butler

At the University Farm, Chris Hornsby, C’19, and his team of hard-working fly larvae are working to change how the world converts food waste to useful compost.

With a background in engineering and environmental studies, Hornsby has been working with the University Farm to develop an innovative composting prototype that has the potential to change the landscape of waste-management systems far beyond the Mountain. And he hopes to make the work of his maggots—specifically black soldier fly larvae—as approachable and actionable as recycling currently is.

“I know I have a bias because of my work, but I think they’re one of the cutest bugs I’ve ever come across,” Hornsby says. “They’re really intriguing creatures.”

Black soldier fly larvae have been at the forefront of Hornsby’s work since he arrived on campus. As a freshman, he applied to the Bonner Leader program, a four-year leadership and community service internship program. In addition to taking a series of skill-building workshops, “Bonners,” as the student program participants are known on campus, are partnered with community service organizations to increase the organizations’ capacity to do their work. Having recently developed an interest in agriculture, Hornsby chose to work with the University Farm, part of the Office of Environmental Stewardship and Sustainability.

“When I first started at the farm, Carolyn [Hoagland], the farm manager, had a tub of larvae and was looking into composting methods,” Hornsby says. “I remember looking at it and being the only one interested. She passed the project on to me.”

The black soldier fly (Hermetia illucens) is native to the region and appears naturally in compost piles. The larvae—flies in their adolescent phase—have extremely active metabolisms and are able to consume food waste at astonishingly high rates. Hoagland and Hornsby’s idea was to find a way to raise and hatch large numbers of black soldier fly larvae to handle food waste from the University’s McClurg Dining Hall. The thought of deliberately breeding and releasing hundreds of thousands of flies is unsettling to some folks, so Hornsby is quick to dispel any discomfort with the project.

“As they near the adult phase, they shed the inner lining of their stomach,” he explains. “The adults don’t even have complete mouth parts. All the fly does as an adult is find a mate and lay eggs. These are important facts for people to know. The flies don’t swarm houses, sting, or eat crops. They’re not disease vectors. Like Luna moths, they’re harmless. There’s a lot of insect phobia, so I always like to talk about this aspect.”

Once the larvae become adult flies, they’re able to be used as chicken and fish feed. Eventually, those same chicken and fish will make their way back to McClurg. The U.S. Food and Drug Administration is currently evaluating larvae as animal feedstock in the United States, a practice that happens now on an industrial scale in China. This closed-loop waste-management system is more efficient and holistic than any other composting option being implemented right now. The University Farm is currently doing field composting with food waste from McClurg, but that can take up to six months. With larval composting, the process is nearly complete in only a matter of days.

“A lot of the waste we’re composting from McClurg is pre-consumption,” says Hornsby. “Things like pineapple tops and cores are the things that are thrown away in food preparation. We eventually want to compost everything, including leftovers the students put on the conveyor belt after they’re done eating. I could put someone’s uneaten egg breakfast in with the larvae, and it would be gone before the day is over.” The small amount of residue left after larval composting can then go through the field composting process or be heat treated to meet U.S. Department of Agriculture requirements for food safety.

The only snag to the larval composting system is that black soldier flies mate only in the summer in this part of the world. In order for the concept to be sustainable, larvae would need to be composting year-round. Enter Hornsby. Using a captive breeding system that he developed, he is now able to produce black soldier fly larvae and create a steady supply of eggs year-round.

“I did a little dance in the barn the day I realized it worked,” he says.

In a small shed at the University Farm, Hornsby successfully emulated the natural mating conditions of the black soldier fly. After creating the proper humidity and lighting levels, he recently hatched his first captive-bred larvae.

This breakthrough doesn’t just have the potential to make waves in the compost industry; it’s fulfilling a commitment Hornsby made as a Bonner student. By the time students become seniors, the program expectation is that their organization has seen growth—that the Bonner student has successfully increased the capacity of their position. Because of the successful captive breeding, the larvae project will continue, creating a sustainable and ongoing project for future students.

“When he first got here, he was so excited to learn about the larvae,” Hoagland says. “He was eager to see how they would fit into the larger conversation of sustainability and what this process might mean for the reduction of landfill methane. His work can be translated and adapted to other businesses and life cycles on an industrial scale. The work that he’s doing here is young, but the implications are large.”

Unlike traditional systems, Hornsby’s larval waste-management system can be scaled to fit local or industrial-sized composting projects. Hornsby’s goal is to make the process easy, to curb the squeamish reactions, and to invite households and businesses to participate in this important work. Because of the cyclical nature of the model, Hornsby’s initiative can even garner profit—both financially and environmentally. Keeping excessive food waste from landfills decreases methane gases that seep into the environment, the compost can be used to revitalize soil organically, and the flies can be used as animal feed. With this model, there is virtually no misuse of resources.

“Nothing in nature is ever wasted,” Hoagland explains. “Everything that dies and falls to the ground is consumed or decomposed. In nature, that cycle is always complete.”

Hornsby is convinced that people genuinely want to be involved in caring for the earth—even if the steps they take are small ones. Individual efforts can add up to a large impact.

“Lots of people are interested in a sustainable lifestyle,” Hornsby says. “Not everyone can join the front lines of environmental activism or chain themselves to a tree, but if you offer them a composting service so that food doesn’t go into a landfill, people will be into that.”

Creating lasting change was the catalyst for Hornsby’s project. For him, it’s about rejecting apathy and realizing we have the power to make a difference—even if it’s on a small scale.

“One of the most significant impacts this project has had in my life is how I can be empowered to make change,” Hornsby says. “I get to look at this building and this larvae project and take pride that this University has taken an interest in it. It made me feel powerful—not in a controlling or self-serving way—but in a way that helped me see that I have the ability to use my education and energy to make a real and lasting impact.”