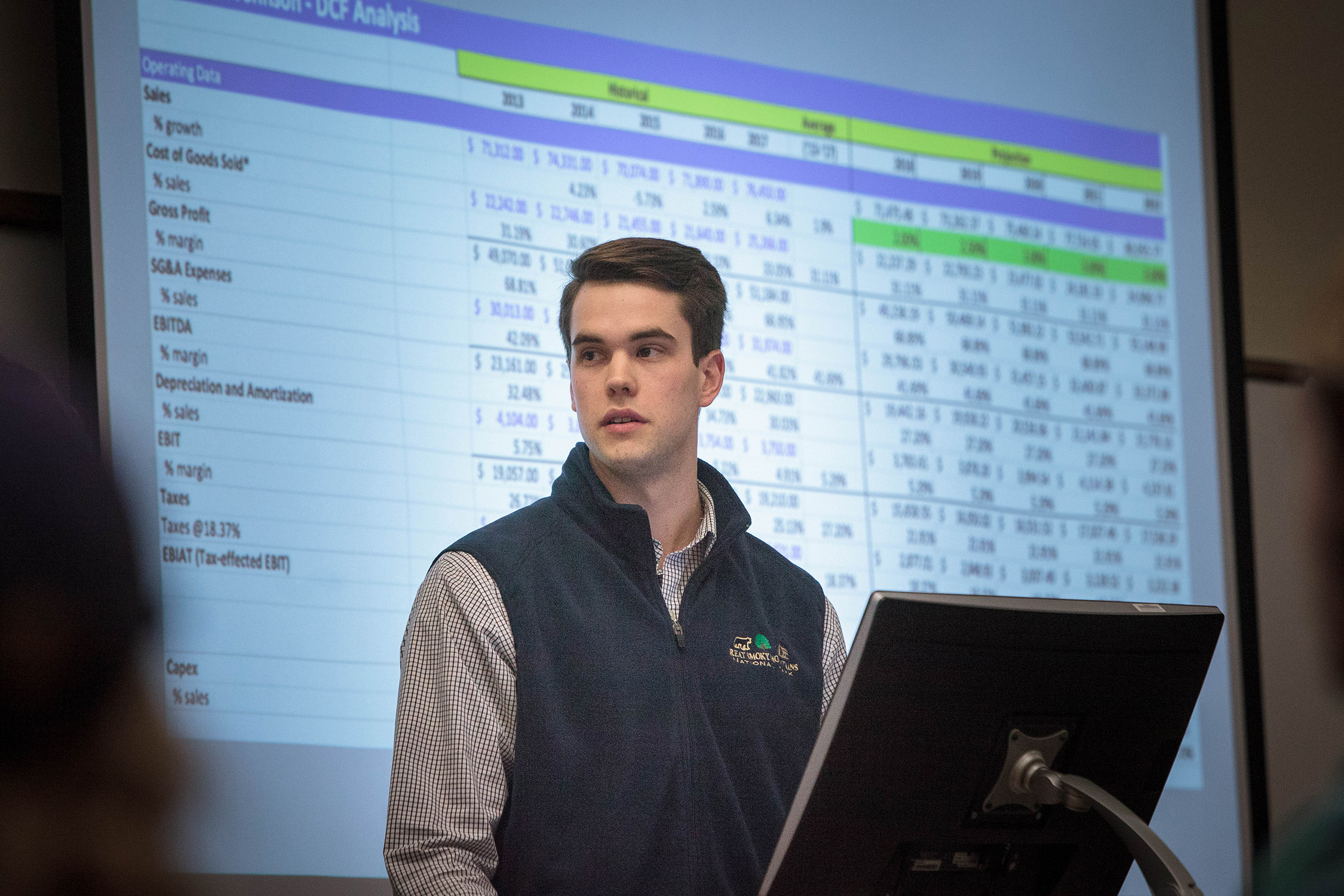 Matt Clendenen, C'18, pitches Johnson & Johnson to the club at a meeting in February.

Even before the Dow Jones Industrial Average suffered its worst-ever single-day point decline and U.S. stocks abruptly lost more than 10 percent of their collective value in early February, the leadership of Sewanee’s student investment club saw storm clouds on the horizon.

Green’s View Capital President Matt Clendenen, C’18, and Hendricks Stowe, C’18, the leader of the club’s health-care investments sector, had been poring over recent news articles, financial statements, and earnings reports for Johnson & Johnson. The two seniors were preparing to pitch an investment in the biotech and consumer-goods giant to the entire club.

Johnson & Johnson, of course, is not the latest hot tech stock and it’s not an investment that’s going to double in value over the course of a month. It is—as Stowe notes during the pitch on a Wednesday night in a second-floor classroom in Walsh-Ellett Hall—a company whose name and products are familiar to every American with a baby to shampoo, a headache to cure, or a smoking habit to kick.  “Your grandparents know about it,” Stowe tells club members. “They’ve had it in their portfolios for years.”

And that’s the point. Before the market started showing signs of real fear in recent trading, Stowe and Clendenen were gazing into the not-too-distant future and seeing the impending tail end of an unusually long bull market. By recommending that the club move some of its assets out of an S&P index fund and into lower-volatility, steady-gain investments like Johnson & Johnson, they were looking to reduce risk in a market that could soon be facing a significant downturn.

“Most portfolio managers are going to increase their positions in J&J going forward, and our recommendation would be to buy 75 shares,” Clendenen says during the pitch. “At the current price, that would be a market value of roughly $10,000.”

A $10,000 purchase would be a significant position for most individual investors and most college investment clubs, but for Green’s View Capital, it represents just over 1 percent of the club’s current portfolio value.

How did a group of Sewanee students interested in investing get their hands on some $750,000 worth of market value? The answer to that question has two parts: First, the University entrusted them with a sizeable portion of its endowment. And then, the students took that capital and grew it by 67 percent in less than five years, consistently beating the market average. Not bad for a bunch of full-time students who happen to be part-time investors.

In September 2013, Sewanee’s Board of Regents voted to give the club responsibility for investing $250,000 of the University’s endowment. After a year of market-beating returns, the regents placed an additional $200,000 under the students’ management. By January 2017, the club’s portfolio was worth about $570,000, and during the course of the year, in which nearly everybody’s portfolios were growing like weeds, the club beat the average yet again, returning 22 percent compared to a market average of 21 percent.

The club’s bylaws provide some guardrails—the students can invest only in S&P 500 stocks and they have to maintain a diversified portfolio. But otherwise, they can choose where they want to put the University’s money.

The club’s officers include a president and a chief financial officer who oversee leaders for seven different investment sectors—consumer, health care, technology, finance, industrials, real estate, and energy. Those sector leaders research companies they want to pitch to the membership, and members vote on whether to invest at the club’s biweekly meetings.

Any student with an interest in investing can join the club, but its officers and sector leaders are usually those who have completed at least some of the University’s economics classes with a finance orientation, which include classes in corporate finance, investments, and derivatives. Those classes are taught by Teaching Assistant Professor of Economics Minh Tam Tammy Schlosky and the club’s faculty advisor, Assistant Professor of Economics Serkan Karadas.

For his part, Karadas is happy that Green’s View Capital is helping bolster the University’s endowment with solid returns, but believes the real value of the club is that the student members get a chance to apply what they’ve learned in his classes to real-world stock market choices—and that future employers take notice of that experience.

Months before they graduate, four of the club’s senior members have already secured postgraduate employment with investment-banking and private-equity firms.

During his three summer breaks from Sewanee, Matt Clendenen held three different internships—at a small bank, at an accounting firm under former Sewanee accounting professor Carl Heinemann, and working with a health-care information technology company—but had no experience in private equity. When Birmingham-based private-equity firm Harbert Management Corporation offered interviews to Sewanee students in December, Clendenen figured it was a long shot. He sent an introductory email anyway. The email led to a phone interview later that day, and the next thing he knew, Clendenen was putting on a suit in the middle of Sewanee’s final exam week and driving to Alabama for a formal interview.

Interviewers asked Clendenen some accounting and finance questions, which he handled deftly with everything he’d learned in Karadas’s classes. But what they were really interested in was his participation in and leadership of Green’s View Capital.

“They wanted to know if I could think like an investor,” he says. “They wanted to get a feel for how I thought about the investment process. They asked me how I ran the DCFs and how I valued companies.” Clendenen explained how he projected revenues for companies he was researching, how he factored in assumed costs and calculated discounted cash flow to reach a stock’s theoretical value and compared it to the current trading price.

Before Christmas, Clendenen had an offer from Harbert. Soon after graduation, he’ll begin working with the firm’s energy investments team, Harbert Power, a group that manages some $5 billion in assets.

“I see no way I would’ve gotten into private equity without the experience I got with the investment club,” Clendenen says. “It’s one thing coming from a liberal arts school and talking about your finance classes, but it’s totally different when you can tell a story about a specific investment you made with the University’s money. Employers take that a lot more seriously.”

At the February meeting, Clendenen and Stowe walk club members through a thorough examination of Johnson & Johnson’s history and current corporate health. They’ve got charts showing the stock’s performance over time and how it compares to close competitors. They discuss the company’s price-to-earnings ratio, and the net debt to earnings before interest, taxes, depreciation, and amortization ratio (EBITDA). They talk about new drug approvals and line extensions for existing pharmaceuticals that could boost future revenues.

Professor Karadas sits in on the club’s meetings. He doesn’t get a vote on stock purchases, but he does provide a little gentle guidance in the form of probing questions. On this night, he asks the presenters to explain how changes in the Affordable Care Act could affect Johnson & Johnson. And he asks them why they would take money out of an S&P index fund and put it into this relatively conservative stock.

“So, my understanding is that you’re somewhat pessimistic about the market?” Karadas asks. “Is that why you’re taking this position?

“With this investment club, we’ve got 50 years to invest, hopefully a lot longer,” Stowe explains. “Companies that carry a little less risk but that are going to be stable performers over a long time—I think that’s where we need to be looking right now.”

“So, this is a risk-reduction move?” Karadas presses.

“Yes, this is more of a hedge than a growth strategy,” Clendenen says before Stowe adds: “We learned that in class, professor.”

After club members scribble their votes on scraps of paper, the purchase is approved.