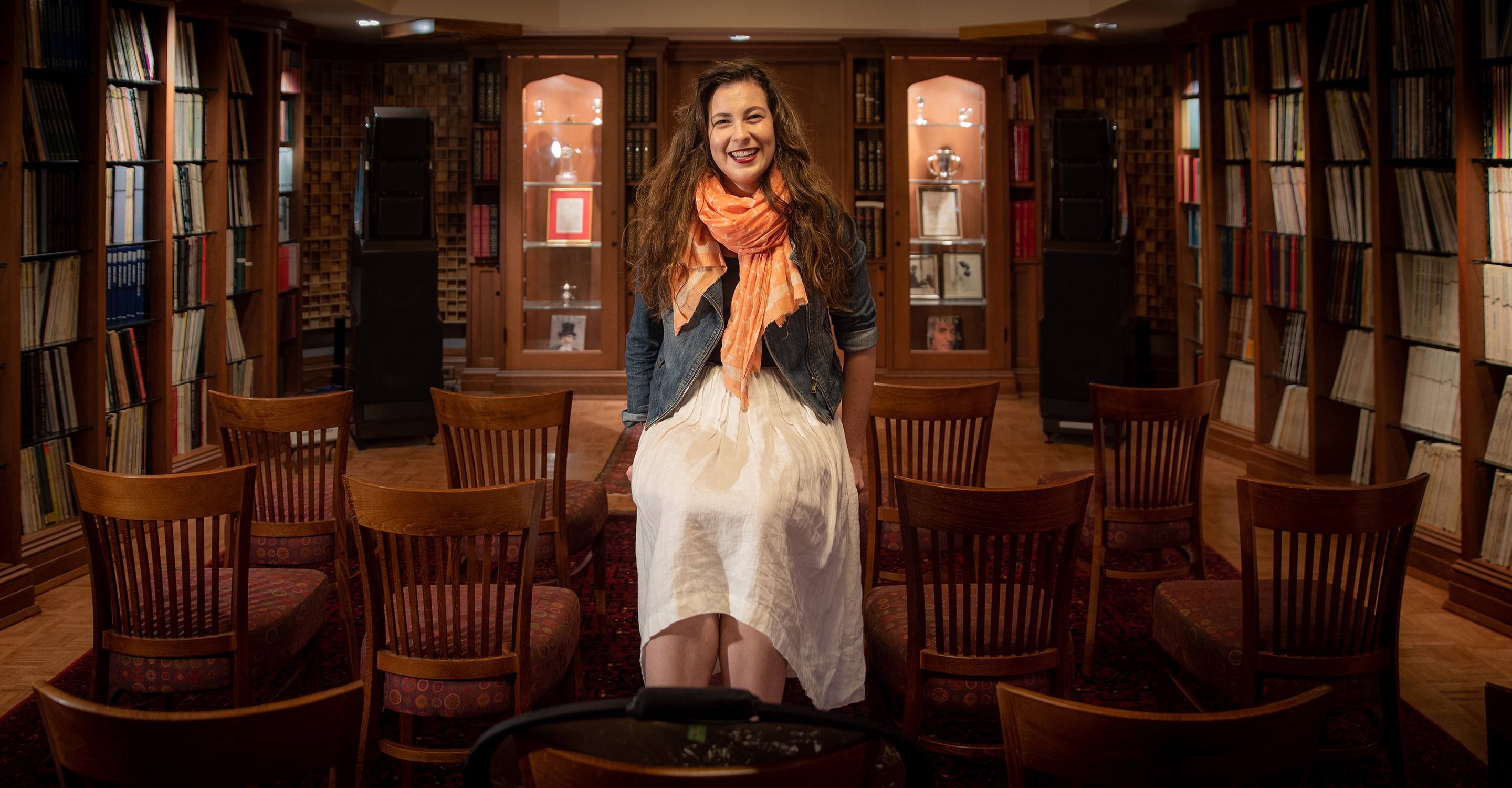 Berends in the Ralston Listening Room in duPont Library, where she'll work after graduation in December.

How do you address an epidemic of homelessness among veterans? To Sewanee student Caiti Berends, the answer was simple: Build a community.

Editor's note: Since the publication of this article, House No. Tenn. has become Valhalla Farms Tennessee. For more information, contact: valhallafarmstenn@gmail.com

Ask Caiti Berends, C’20, where she’s from and she’ll rattle off about 10 different places in such an orderly fashion that it’s clear she’s mastered this icebreaker. Dallas, Boston, Florida, Georgia, North Carolina, Memphis, Grand Rapids, Sewanee, and most recently Rochester, though technically she hasn’t been to this last stop because her parents only recently moved there. The child of a priest, Berends moved around a lot.

It’s the type of geographic rootlessness that might leave another person feeling chronically untethered or unable to connect. But in Berends, who will graduate a semester before the rest of her class in December, it’s her ease with moving around that has provided the perfect foundation for her new project.

In January, Berends will officially incorporate House No. Tenn, the nonprofit she started in August 2018 to build a tiny house community for veterans transitioning out of service

For the 21-year-old music major and theatre minor with no immediate connection to the military, House No. Tenn sounds like a leap. But it was music that first led her to the idea she couldn’t shake.

A classically trained opera singer, Berends spent summer 2018 interning at Opera Maine in Portland. Even with a salty breeze coming off the water and temperatures in the upper 70s, conversations still always seemed to come back around to the brutal Maine winters. Below freezing temperatures, negative windchills, feet of snow—Berends wondered where all the homeless people she saw downtown would go when it got that cold.

She began to strike up conversations with homeless people she met, asking them about their experience with being unhoused. At the same time, she was considering her own future housing. As an artist, Berends was concerned about what housing options would be available to her.

“I’d been thinking a lot about tiny houses and how you could pursue the arts and live nicely. How do you do that?” Berends recalls thinking. Tiny houses, those with less than 400 square feet of living space, captured her attention as a viable alternative to more traditional housing. With artists often living a more transient life, going from city to city and gig to gig, tiny houses, which can be picked up and transported elsewhere, provide an increased level of mobility and stability for someone frequently on the go.

Accustomed to adopting a new address every couple of years, Berends had a sense of the value this affordable and minimalistic style of housing could offer someone. And if not just artists, then who else?

The pieces were slowly starting to come together, and when Berends returned to Sewanee, she pitched the idea of a tiny house community to her music advisor, Peter Povey. Encouraged to pursue the idea further, it was around this time, too, when Berends stumbled upon a statistic that revealed that one in three homeless individuals in the United States had also served in the armed forces. It became clear to her that the sort of community she was envisioning could serve the veteran population well.

When she listed some of the most common stressors in life—death, change in finances or job loss, moving, illness—they were all things that veterans were almost sure to encounter, sometimes several at once. And with the number of homeless veterans continuing to hover around 40,000 in the United States, there was no shortage of people in need.

“I was talking to a veteran, and he said you could be deployed, come home, and in three weeks be discharged and considered a civilian,” she says. “So, what you see is that [veterans] can hold on for about a year or two and then that’s when you start to see suicide and things falling apart. They go from being a part of something to coming home and no one cares what they did.”

Berends’ vision to combine tiny house community living with resources to assist veterans transitioning out of service was beginning to take shape. But for House No. Tenn to get off the ground, she was going to need some help.

“I was looking to directly mentor a young woman who was looking to do something—something extraordinary, something that was going to make a community impact, a service impact,” says Hayley Shelton, C’04, Berends’ first board member for House No. Tenn. Kim Heitzenrater, director of Sewanee’s Career Center, knew Shelton needed to meet Berends.

“[Heitzenrater] put us together, and it was immediate chemistry and off to the races,” she says. “[Caiti] saw this as a need during a trip once and then started looking into the plight of veterans. She doesn’t have military family. She’s not military. She just saw a need and decided to throw herself into it.”

As the owner of a human resources consulting firm and the founder of her own nonprofit dedicated to helping under-served individuals meet their career goals, Shelton had the experience and insight Berends needed to start making her next moves.

There were services to map out, a business plan to write, 501(c)(3) paperwork to file, and a board to fill out, not to mention finishing her senior year of college while also serving as the part-time curator of the University’s William Ralston Listening Library (a role Berends will move into full-time following graduation). Shelton introduced Berends to Mark Reineke, C’87, a Nashville-based lawyer who was equally moved by Berends’ passion, enthusiasm, and willingness to help others. He became House No. Tenn’s third board member, and together, the group started chipping away at the list with Berends leading the charge at every turn.

With more than 45,000 nonprofits already dedicated to serving veterans, one of the first things Berends had to do was identify where there was still a lapse in support. “Many of the [existing nonprofits] seem to focus on intervention rather than prevention,” she says. “I’m not saying we can prevent PTSD or a lot of the things [veterans] go through, but if there was some place they could actually go and become ready for a different life, it could help.

At launch, House No. Tenn plans to offer around 10 tiny houses for veterans to live in independently. Candidates will be vetted to ensure they’re a good fit for community living. Once enrolled in the program, they’ll have access to not only a stable living environment but also programs and classes around career development, home and auto maintenance, personal finance, and of course, the arts.

“House No. Tenn is structured to be a hand up, not a handout,” says Shelton. “Our success rate is going to, weirdly enough, depend on how many people we move out of our program.” While the total length of time guests will be able to reside in a tiny house hasn’t been finalized, the team is estimating around six months.

“What personally excites me will be seeing successful transitions for our veterans from House No. Tenn to getting a residence of their own and getting a job and learning life skills,” adds Reineke.

And as with most nonprofits, one of the most significant next steps they’ll undertake is fundraising once they’ve achieved their 501(c)(3) status. The trio, who are looking to continue building out their board with veterans and representatives from the mental health field, want to use initial capital raised to purchase around 10 acres of land in Grundy, Franklin or Marion County. From there, they can begin acquiring the materials needed to build the first batch of tiny houses.

Still just in the beginning phases with a lot more work to come, Berends has already seen how much this work is changing her.

“It’s stretched me a lot. I’d never taken a business class before. I didn’t know how to write a business plan,” she says. “There are so many moving parts to this idea and that’s hard to keep up with, but I try not to worry about it and just keep going. I think the door would have closed quite a while ago if it wasn’t supposed to happen. I really think it could work, and I think it could be something different that’s very helpful."