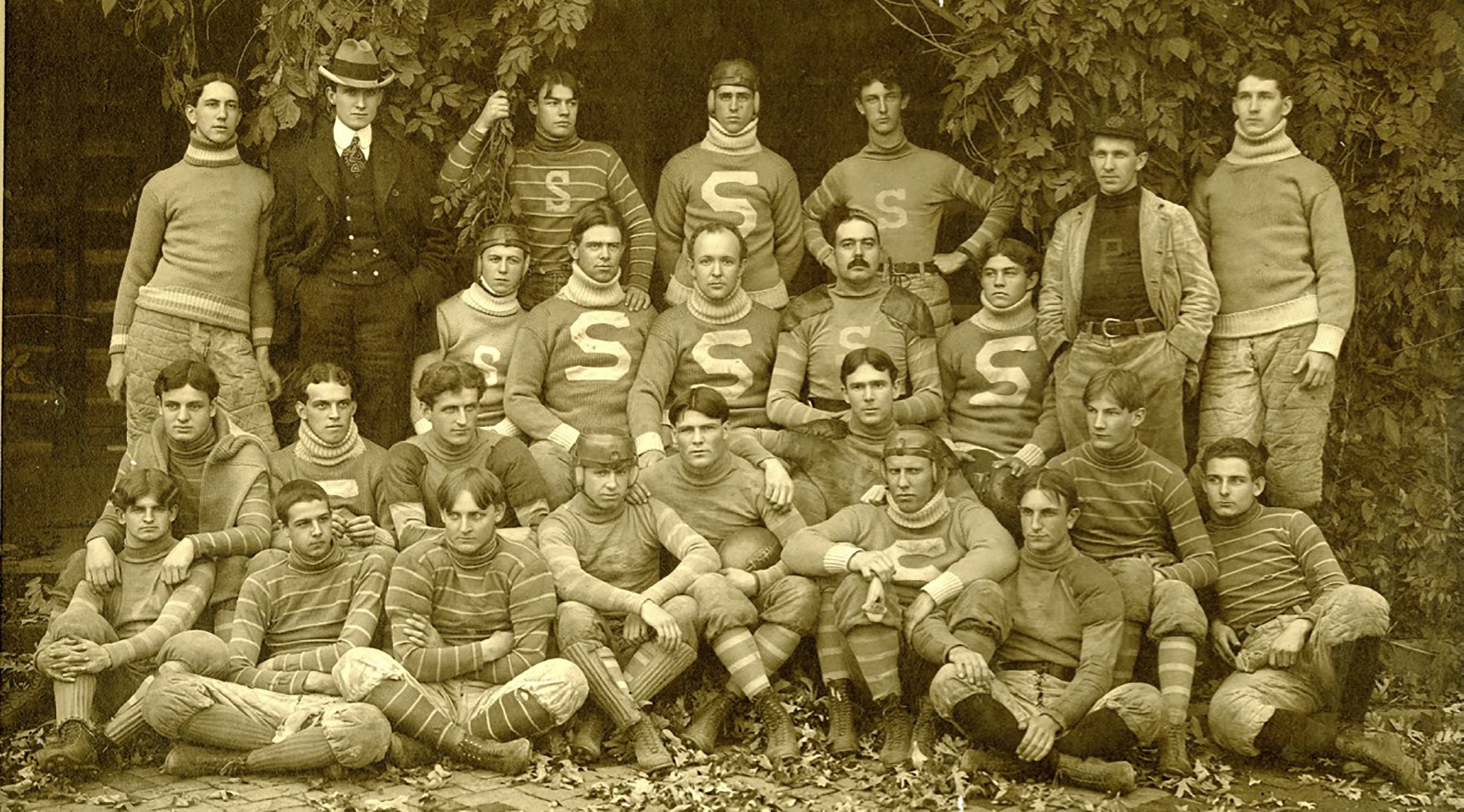 The Sewanee football team of 1899.

Bringing the Iron Men to Life

Two Class of ’76 alumni explore Sewanee, sports, and cultural history to tell the true story of the 1899 football team in a forthcoming documentary film.

Everybody who passes through Sewanee’s stone gates—visitors, prospective students, lost souls who take a wrong turn off I-24—will all have one experience in common: They won’t be on the Domain for long before hearing about the Sewanee football team of 1899. In the usual telling of the story, the season played by that team seems more like legend than history—a bit of folklore with a religious slant. Posters reading “On the seventh day, they rested” can be found in offices and dorm rooms across campus. The story is told with pride, and with what seems like at least a little embellishment.

Now, a couple of devoted Sewanee alumni are on a mission to debunk any skepticism about the veracity of the tale and to tell the whole story. Relying on research done by Francis S. Houghteling Professor of American History Woody Register, C'80, the documentary crew is breaking the 1899 season down to its finest details. They’ve come to find that it’s much more historical fact than folk tale.

“That’s why we’re making this film,” says David Crews, C’76, one of the producers of Unrivaled, a documentary about the 1899 team that is currently in production. “A lot of people feel like the mythic parts outweigh the reality of the story, but after a lot of research, we’ve found that virtually everything is documented and true. It’s time for this story to be told at a thematic level.”

When Norman Jetmundsen, C’76, an attorney in Birmingham, Alabama, approached friend and classmate Crews with the idea for the film, Crews was all in. Both men have day jobs, but they’ve devoted any spare time they can carve out of their busy schedules to making the documentary.

On weekdays, Crews serves as the clerk of court for the U.S. District Court in the Northern District of Mississippi. On weekends, he’s an award-winning filmmaker. Now, the idea shared by these two Sewanee alums has grown from improbable whim to nearly realized production. Sewanee graduates Kate Littleton Gillespie, C'97; Lloyd Lochridge, C'12; and Amelia Koch, C'13, have volunteered to be part of the team. The 1899 documentary is scheduled to debut in fall 2019, and it’s a story that should find a wide audience.

Most everyone knows the basics of the story, especially the part where the football team wins five games in six days, traveling over 2,500 miles by steam locomotive in the process. Considering the way student athletics are regulated by the NCAA today, it’s certain the feat will never be equaled. This incredible set of facts is what makes the story so appealing. But, according to Crews and Jetmundsen, it’s the depth of the story that is driving the film’s production. It’s the volatile backdrop of the post-Civil War South. It’s the texture of a brutal game in its infancy. It’s the story of young men pushing past all reasonable physical limits.

“It’s truly a human-interest story,” Jetmundsen says. “The story sells itself. These boys were just students who loved the game. They didn’t know they were about to make history.”

The 21 men on Sewanee’s team rumbled into a new millennium carrying with them odds defied and barriers overcome. Early-era football didn’t allow rest, substitutions, or playing on only one side of the ball. The mental fortitude required for the schedule the 1899 team played may be unparalleled by any other team in any sport. The physical demands were also intense, following some players to their grave.

Ormond Simkins, a Tigers fullback and punter and law student at Sewanee, sustained so many injuries from the brutal season that he eventually had both of his legs amputated. During the surgery for his second amputation, Simkins died. Stories like this arise frequently when you start digging into the 1899 team—many of the players died young. Although it’s difficult to correlate the rate of early mortality to the 1899 season, it’s hard to imagine that the grueling series of games didn’t play a part.

Jetmundsen wants to shine a light on the physical and mental costs that the season placed on the players, so the documentary will include the story of Simkins, who was also the valedictorian of the Class of 1900.

“From the beginning, athletics and academics have gone hand in hand,” Jetmundsen says. “And these boys weren’t playing for glory or scholarships. They were playing because they simply loved the game.”

Along with the team, the sport itself is being explored. At the time, football was new in the South, and it hadn’t yet found a broad fan base. The texture of the game was altogether different, too. The play was relentless, and with rudimentary helmets and no forward pass, players were barreling down the field with abandon, chunks of their lives being stripped away with each snap. David Crews is passionate about the depth of the story and wants to make sure it’s told in full.

“There have been vignettes here and there,” Crews says. “A five-minute piece on ESPN GameDay and an article in Sports Illustrated back in the 1960s. But no one has really told the story fully and taken a look at the whole arc of that team and that season. There are themes about the nature of football that haven’t been fully developed. There’s also the Civil War element and how that weaves into the story. The setting—a gritty mountaintop depleted of its resources, farm animals roaming around—we want to tell that story.”

When we think of the 1899 Sewanee team, we narrow our focus to the gridiron, the locomotive, and the tenacity. But the social backdrop is equally intriguing, and that’s one part of the story this documentary crew is chasing—putting the team in the context of a post-war South. An unsung hero of the team, Cal Burrows, was the African American trainer who traveled with Sewanee that season. When asked how the documentary team plans to unpack the trainer’s part of the story, Crews says that he regrets the lack of information available about Burrows.

“It just speaks to the time, unfortunately,” Crews said. “Cal Burrows was such an integral part of the team—essential, actually. Yet there is no further information about him beyond what he did for the team. He was what they called the rubdown man. He massaged the players on the train rides between games. That was invaluable in keeping them healthy.”

(Conditioning and recovery techniques for athletes at the time were primitive at best. Forget about suction cup treatment, ice baths, myofascial release, or acupuncture. Growing hair long was a popular method for protecting the skull, and rather than being benched after a hard hit, players’ concussions were treated with a simple “shake it off.”)

Team manager Luke Lea is one of the central characters of this story, and, like the season itself, the role he played will never be duplicated. He was not only managing the team, devising and executing the most stunning schedule in football history, he was also a student, taking classes and studying for exams. And he hired the coach.

Why is now the time to focus on the 1899 team? Jetmundsen and Crews believe not only that the story is begging to be told fully, but that time is of the essence. The daughter of Luke Lea is 95 years old and has a wealth of history to share. Crews was able to catch up with her earlier this year in Nashville.

“We have some connections to these legends,” Crews says. “It’s so important that we talk with them and get a sense of what these characters were like. Laura Knox is her name. She’s doing well and is another invaluable asset to this project.” Jetmundsen has also interviewed the daughter-in-law of Henry Seibels, captain of the team.

Crews and Jetmundsen believe unlikely stories like Lea’s are sure to appeal to a wide audience.

“We showed the trailer to the Sewanee Alumni Board when we first got started,” Jetmundsen says. “A female alum came up to me afterward saying, ‘You know, I’m not even a football fan, but this really resonated with me.’ She made the first donation to this documentary project.”

The story also resonates with Sewanee’s current football program. Today’s coaches work to connect players to the 1899 team by bringing elements of the story into both recruiting and game preparation. The Unrivaled trailer has been used as a recruiting tool as well as a hype video for the team.

Jetmundsen and Crews hope their film will honor tradition but also showcase something more than the oft-told tale of the Sewanee football team of 1899. They want to show the world the heart behind the grit.

“It’s a story I hope Sewanee will be telling a hundred years from now,” Crews says.

As long as there’s a University of the South in 2118, it’s almost certain Crews’s wish will come true.

To learn more about the project, to view the trailer, or to contribute to the production of the documentary, visit sewanee1899.org. The University will own the rights to the documentary when it is completed, and all donations are tax-deductible gifts to Sewanee.