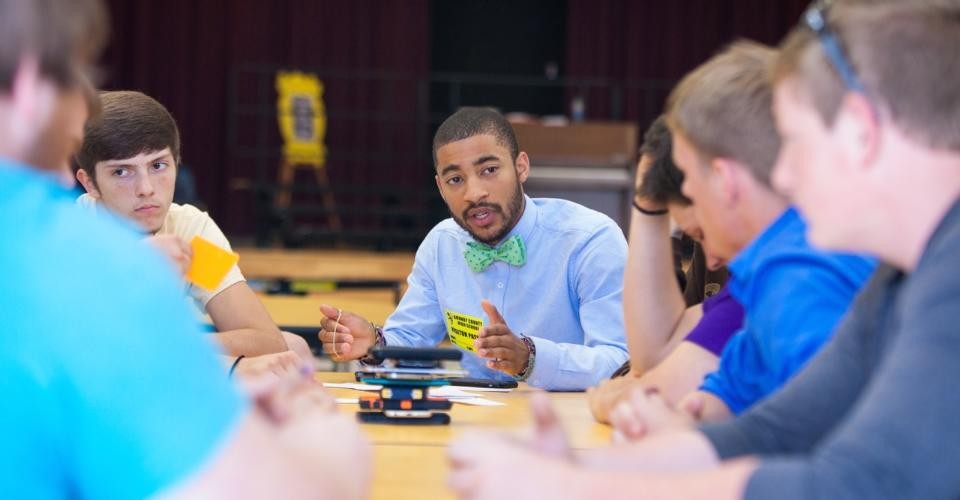 Jewlz Davis, C’16, is introducing high school students to new ideas about masculinity—if he can just get them to focus.

I f Julian “Jewlz” Davis, C’16, is going to make men out of these boys, he’s first going to have to deal with the rubber band.

It’s sixth period at Grundy County High School on a late-April afternoon, and Davis has gathered 10 male high school students around a table in the school cafeteria for what he hopes will be a meaningful—even potentially life-changing—conversation. There will be many impediments to productive discourse during the next 45 minutes, and the one currently at hand is the oversized rubber band Davis used to wrap the handful of ballpoint pens he’s brought along for today’s reflection exercise.

“Grab a pen; make sure it works,” Davis says.

“I want a good pen,” a junior named Tommy says.

“You don’t have any of those Sharpie pens?”

Another boy tries a pen and offers a critique (“This one don’t even work”) before noticing the large rubber band lying on the table next to the scattered pens. “Now that is a rubber band!”

“If the rubber band becomes a weapon, it will become mine,” Davis says calmly.

Recognizing a good idea when he hears it, the boy picks up the rubber band, hooks one end around a thumb and stretches it to its full weaponized length, threatening to send it sailing through the cafeteria air. Davis catches his eye, and, chastened, the boy drops it.

“If the rubber band becomes a problem, it will become mine,” Davis says. No one challenges his resolve on the issue any further.

Time and time again during their meeting, Davis displays an uncanny talent for remaining steadfast in the face of distraction and for projecting a calming authority with a group of boys who are equally steadfast in their desire to test it. They are high school students, after all, full of hormones and off-topic commentary, trying hard to impress their classmates with at least the appearance of defiance. For Davis, the boys’ shenanigans are a small annoyance on the path to something significant: expanding the definition of masculinity for these soon-to-be men so that they might be able to find a path to personal success and fulfillment.

For the last two years, Davis and his fellow Sewanee student leaders have gathered groups of boys at Grundy County High twice a week for this program, which they named “Man Up.” Davis is a Bonner Leader, a participant in a service internship and leadership program that sends students into Sewanee and neighboring communities to serve in a variety of ways. Davis and other Bonner Leaders founded the Man Up program in 2014 after talking to another Bonner Leader who had started a regular women’s empowerment luncheon at GCHS and thought the boys in the school could use a program made just for them.

Man Up grew out of Davis’s own explorations into what it means to be a man. When he was a high school student, he says, he looked to examples of manhood offered up by popular culture—athletes, musicians, actors—and wondered how he could ever measure up. “The world usually puts forth one definition of what a man is—men are strong and they’re athletic and they’re tough,” he says. “But at only 120 pounds, it was hard to feel like I had what it takes. I began to explore masculinity and what it means.” What he found is that there are many ways to be a man.

At GCHS, Davis met with students who were in the midst of their own masculinity projects. They too looked to popular culture for guidance and found themselves wanting. Through weekly small-group conversations, Davis and his fellow Man Up leaders challenge the notion that the ways to be a man are limited to a few prescribed roles.

Davis’s very presence at Grundy County High School offers a look at a kind of manhood these boys may not have seen before. In addition to being a Bonner Leader, the senior English major from Brentwood, Tenn., is the president of the Sewanee Student Government Association, a co-president and Bible study leader for Cru (Campus Crusade for Christ), a member of the Community Engagement House, and a senior interviewer for the Office of Admission. “And I’m a black dude in a bow tie,” Davis says. “They may not be used to that. We want to offer different representations of manhood, and we also see it in the kids who go through the program—theater kids next to athletes. They come together. The hierarchy becomes so much less rigid when we’re in that space.”

Man Up uses a curriculum, “Respect 360,” produced by the Respect Institute, a nonprofit organization that trains leaders who work with vulnerable youth to guide participants through a program that focuses on self-respect and respect for others.

Today’s session starts with highs and lows. Davis goes around the table, asking each boy to share one highlight and one disappointment from the previous week, starting each conversation with a “Holla at me.” Highs: “We got out of school early last Tuesday;” “Played in a baseball game and won;” “We made a dirt-bike track.” Lows: “I had to take the ACT;” “I got hit with a baseball;” “Found out I can’t play football next year.”

Next, Davis reads a series of questions (including “What does success mean to you?” “What’s your dream job?” “What do you feel strongly enough to protest as an activist?” “Who do you admire as a leader?”). He asks the boys to choose one of the questions to answer and enforces five minutes of (mostly) silent reflection. At the end of the five minutes, before Davis begins soliciting answers, comes a warning: “I heard some snide remarks coming from this section of the table. If those answers come out, we’re going to have some issues. I will shut it down, and I will make you rethink it. Don’t test me.”

In choosing a question to answer, most of the boys seek the easy path. Dream jobs include NASCAR driver, carpenter, professional baseball player, mechanic, and owner of General Motors, because, the boy says, “I could own any kind of Chevrolet I want.”

But one boy doesn’t feel like playing along. “I forgot the questions,” he says. “I really don’t like any of them.” Davis isn’t going to let him wriggle out that easily. “I’m going to read the questions again,” he says. “I just need you to pick one and run through the process, and then I want you to tell me why you didn’t like the questions. We’re going to learn on both sides.”

The last few boys in the group answer their questions before Davis circles back to the reluctant participant, who has chosen to answer a question about life goals. “My goals … I guess getting a good job; I’ve had more than one since I’ve been younger. You know, having kids, giving them what they deserve, like sending them through to college and stuff. And help my Mom, and give her a nicer place to live than what we’ve been living in.” With this answer, the mood of the table shifts perceptibly. The other boys sense the authenticity in the answer and grow quiet to respect it.

“I feel that,” Davis says, rewarding the boy’s heartfelt response with his undivided attention. “That’s not only admirable, that’s an insightful response and I appreciate that.”

But he’s not done. As promised, Davis asks the boy why he didn’t like any of the questions. He says that knowing this will help him refine the program for future participants, but it’s clear that Davis doesn’t want to let this opportunity for group self-reflection pass, with the risk of the conversation devolving into silliness again. “It’s all fiction,” the boy says. “Ain’t none of it true. It’s all what people think and what they say they want to do, but it’ll never come true. Instead of saying that they think about it, why don’t they get out there and do it? It’s all a bunch of bull.”

Davis doesn’t flinch at this indictment of the process, offering instead an eloquent defense of the work they’ve been doing. “Hey man, I appreciate that response,” he says. “I will say this, though: I think that what we’re doing is trying to see into our future a little bit. And though it’s possible that all of it could be bull, it is also possible that we’re setting ourselves up to have goals. These questions are just abstract ways for you to think about it. I don’t want you to just throw out some answers. That’s why we have the five minutes to think about what you really want to do, what is your dream job, what do you really want to be. Then when you verbalize it, it’s like snap, I’ve thought about it, I’ve processed it internally, and then I spoke it. If this is really what I want, maybe I need to take steps to do that.”

In Davis, these boys see a mode of masculinity that might not be theirs, not yet at least. But it could be something to reach for.

Just before the class bell rings, Davis stands up and says, “Alright, boys,” signaling the end of the discussion. As they pick up their phones from the stack in the middle of the table, they turn toward him, one by one: