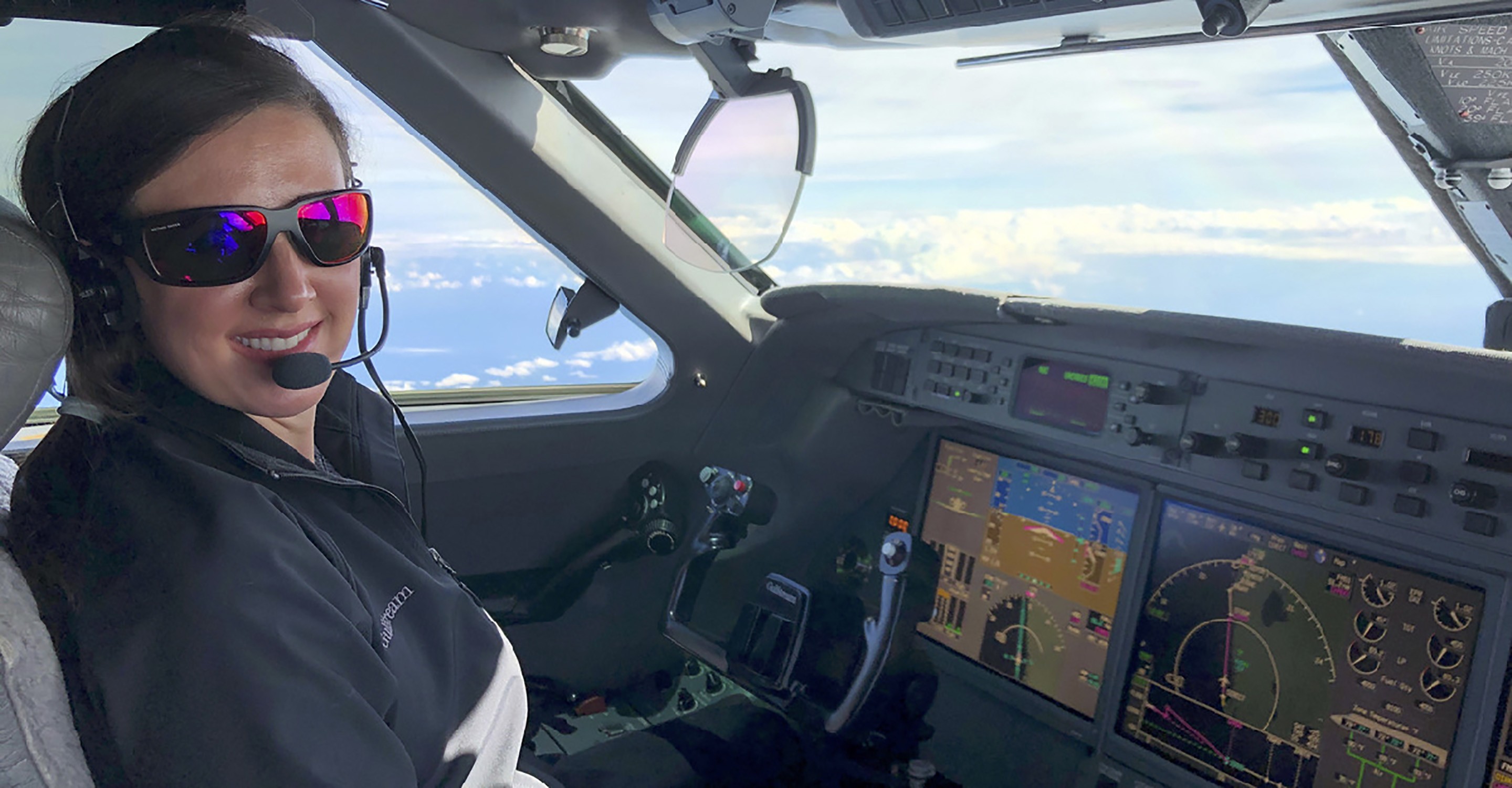 Now 34 years old, Bethany Davis, C'07, has been senior avionics program leader at Gulfstream since she was 31.

Bethany Davis, C’07, has used lessons from Sewanee and a lifetime in aviation to become a program director at aerospace leader Gulfstream and one of the few women to reach such lofty heights at the company.

Her senior year at Sewanee, Bethany Davis, C’07, needed a topic for a research project, and she was forbidden to focus on airplanes. Davis’ whole life has been devoted to aviation, but—more to the point—her junior-year project had been, too. Her professor told her she needed to choose something different. A physics major and a member of the golf team, Davis decided to study the aerodynamics of golf balls. Different enough, but still within her wheelhouse.

She went about it in the methodical way she goes about everything, forging connections where they needed to be forged, and thoughtfully seeking resources where they were available—a way of working that, less than a decade after graduation, would help Davis become one of the youngest program leaders at Gulfstream Aerospace, the business-jet manufacturer located in Savannah, Georgia.

First she called up the golf-ball maker Titleist, reaching the company’s chief aerodynamicist. He helped her come up with a topic: Golf balls are dimpled, and the aerodynamicist was wondering how the depth of the dimples affects the balls’ flight. Davis designed three models with dimples of different depths; now she needed someone to manufacture them. The previous summer she’d interned at Lockheed Martin, in the aerospace company’s famous Skunk Works advanced development program, so she called them up. They agreed to 3D-print the balls.

One last hurdle: She needed a wind tunnel. Davis knew there was one at the Georgia Tech Research Institute, but it wasn’t free. “My parents weren’t going to give me $3,300 to do wind-tunnel testing,” she says, laughing. So she sent a proposal to the United States Golf Association, which subsequently wrote Davis a check, which helped her test the golf balls—designed with the help of the foremost aerodynamics expert at one of the world’s largest golf companies, printed by a major American defense contractor—for an undergraduate senior research project. “And now I can tell you why, if you’re a slower swing you should have a deeper dimple, and if you have a really fast swing, like Tiger Woods, then you need a shallower dimple,” Davis said. “That’s what the results showed.”

They also showed Davis’ great promise as a facilitator as well as an engineer. Today, Davis is senior avionics program leader at Gulfstream, which employs 18,000 people worldwide. She’s been in the role since she was 31 years old; now 34, Davis is the youngest director she’s aware of in the company, and one of few women in a leadership cohort of mostly older men.

Avionics refers to the electrical systems within an aircraft, and Davis’ purview is pretty much whatever the pilots touch, from levers and control panels to the chairs they sit in. “Anything the pilots interact with, we are trying to create mature technologies to make it safer, faster, easier, more enjoyable,” she says. Her job, as in the golf-ball project, is about connecting different parts—acting as a conduit between engineers, for instance, who speak a highly technical language, and salespeople, who need to be able to explain to billionaires, in plain terms, why this is the jet they need in their hangar.

“I’m not the expert pilot,” Davis says. “I’m a good pilot, but we have experimental test pilots who are Air Force Test Pilot School-trained. I’m an engineer, but I’m not the expert engineer. I’m in sales, but I’m not an expert salesperson. How do you connect all those dots so that when you release a new product or a new service or a new airplane, it’s going to be a success? There’s hundreds of thousands of moving parts to a successful release. I am really good at making sure that entire picture is understood.”

Davis credits her liberal arts education for her success, but she also chose Sewanee for another reason: Unlike other colleges she looked at, it had an airport on campus. That was where Davis landed the first time she visited.

She comes from a family of aviators: Her grandfather was a farmer on Long Island, New York, who cut a landing strip into his fields. Her father is the general counsel, and a pilot, for Phoenix Air, located just northwest of Atlanta in Cartersville, Georgia. Phoenix Air flies “special missions,” including jobs for the U.S. government. It was Phoenix, for instance, that brought medical workers back from West Africa during the 2014 Ebola outbreak. “If you want to get penguins to your new zoo, they’ll go get the penguins,” Davis says, characterizing her father’s work. “If you need dolphins at the Georgia Aquarium—my dad flew the dolphins.”

Davis started flying so young that she can’t even remember her first time. She piloted an airplane solo (on her 16th birthday) before she drove a car by herself (the day after her 16th birthday). Depending on which plane you take, Cartersville is between 30 and 60 minutes from Sewanee by air, and Davis flew back and forth between home and the Mountain when she studied there. She used to take friends up to see the plateau from the air, cruising over the lakes, forests, and fields.

After graduating summa cum laude—physics major, Spanish minor—Davis got a Fulbright scholarship in Mexico City. There she worked for the airline Volaris, whose CEO she got to meet, along with a handful of other high-ranking Mexican aviation officials. “It was just asking, and being polite about asking,” she said. “Being genuinely interested in talking with them about their experiences, I got to meet with tons of really cool people.” She worked on a project to help Volaris save fuel, which was wildly expensive at the time. Davis and her colleagues figured out that because it’s ultimately pilots who decide how much fuel to put in the tank—and fuel, being heavy, contributes to how much fuel a plane burns when it’s in the air—one key to cutting costs was to fill the tank less full on flights where a lot of fuel wasn’t required. Making the change just required communicating the situation to pilots. “We were saving millions of dollars a month on fuel with just some small changes,” Davis says.

Afterward, Davis went to Georgia Tech for two degrees: a master’s in aerospace engineering, and an MBA. In the summer of 2010 she interned for Gulfstream, and was hired on in 2011, after graduation. Today Davis lives in Savannah’s leafy Ardsley Park neighborhood, and her life is consumed by meetings—particularly this summer, when Gulfstream was in the midst of renegotiating contracts with its big suppliers. Her life is also consumed with flying—her husband, Michael McCauley, runs a private jet service in South Florida—and with children. The pair have a one-and-a-half-year-old son, and are expecting twin girls in November. Not only is Davis’ son an experienced flier already—so is his au pair, who is from Thailand, and who has a degree, as it happens, in aviation management.

“She just passed her private pilot written exam,” Davis says. “We’re trying to get her to become a pilot. She came to the U.S. and wanted to be a flight attendant. She didn’t even know that women can be pilots.”