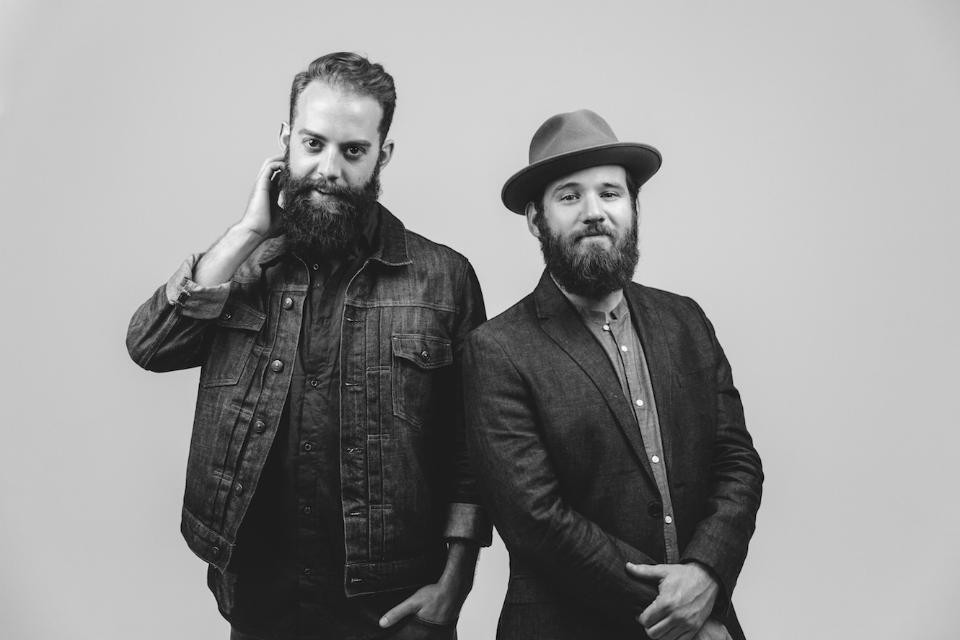 Behind the Music (and the Beards)

James Mason, C’07, is one half of The Roosevelts, a Nashville-based duo that is looking to its fans to serve as its record company for the band’s debut full-length album.

J ames Mason, C’07, and Jason Kloess are the bearded duo behind Nashville-based Americana band The Roosevelts. As charming in person as the songs they create together, Mason and Kloess are set for big things with their upcoming debut album, “The Greatest Thing You’ll Ever Learn.”

Bonding years ago over their shared passion for creating music, the two have since become self-professed “brothers in song.” Together they’re creating genuine, heartfelt music that combines country, blues, and rock. Mason and Kloess met in Austin, Texas, after each had moved to the city in search of musical pursuits. Kloess began his musical journey in his hometown of Birmingham, Ala., when he started playing the piano as a child, but Mason’s began in his dorm room during his freshman year at Sewanee.

“Truthfully, the reason I first got into music was because of my freshman roommate, Dylan. I told Res Life they hit a home run when they put us in a room together, because we’ve been best friends ever since,” Mason says.

The first real show Mason ever played was at the Pub in Sewanee, a gig he and Dylan were offered when someone down the hallway happened to hear them playing in their dorm room. “For our entire Sewanee careers, we were playing at the Pub on weekends once a month. We’d play Stirling's front porch, graduation parties, family weekends. I’m sure we didn’t sound very good, but we had a hell of a lot of fun.”

After graduating from Sewanee, Mason had plans to pursue a career in medicine. Though he had a love for music, his first passion was medicine, and his plan after graduation was to go to medical school. “I was ready to go to school, and Dylan said to me, ‘Do you really want to jump into that? You’ve just passed your comps, so maybe relax a little bit.’”

The two decided to do a cross-country bicycle ride together to raise money for the Lupus Foundation of America, and music was again brought into the forefront of Mason’s mind during the journey. “Music wasn’t a component until about three weeks into the ride,” Mason says. “It was about nine o'clock one night, and we rolled into Pritchard, Idaho. Eagle, Pritchard, and Murray are three towns less than a mile from each other, with a combined population of about 40 people. We found a bar and sat down to rest, have some food, talk to the locals, and find a place to camp.” When the owner found out they had both been line cooks and could play guitar, she offered them a job on the spot. “They asked us to cook by day and play music by night. We wanted to, but we were on a schedule and had to finish the journey. But that’s the moment we decided we had to move somewhere and play music, just to see what would happen.”

When the cross-country trek was finished, the two college friends moved to Austin, Texas, to pursue careers in music. “We said we’d give it two years, but then we met Jason and started playing together for fun,” Mason says. “Dylan played saxophone, I played acoustic guitar and sang, and Jason was lead guitar. A few weeks later, we were all at a house party and were playing in the corner. This hip-hop artist named MC Overlord showed up and told us we were going to open his next show. We didn’t even have a band.”

The guys formed the Eagle Pritchard Murray band—named after their fateful stop in rural Idaho, where they decided to pursue music. “We were all playing together for a while, but eventually Dylan went back to his original career plan,” Mason says. “And I got hooked.”

When Eagle Pritchard Murray split, Mason and Kloess decided to start a new project. Bonding over their shared love for the sounds of artists like Joe Cocker, James Taylor, and Ryan Adams, the two formally started The Roosevelts in 2012. They released their first musical project as a duo in 2013, an EP called "Cold Sheets" that showcased their affinity for genre-blending, soulful harmonies, and emotive songwriting. With their upcoming release, the band’s sound has evolved, but they’ve stayed true to their roots. “We’re still trying to figure out exactly what to call our music,” Mason says. Their songs feature a blend of folk, Americana, rock, country, and soul.

‌Making the move to Nashville a year ago has proven to be a smart business decision for The Roosevelts. In Nashville, they started meeting people and establishing a team of supporters who would ultimately help them with the production and the release of “The Greatest Thing You’ll Ever Learn.” “You meet so many people, but it doesn’t necessarily mean they’ll love you or get what you’re doing,” Mason says. “You have to go through about 10 of every category—10 publishers, 10 managers, 10 labels—and you kind of figure out who you have chemistry with. It’s a lot like dating. So we came to Nashville and started doing a lot of dating, and anyone who’s done a lot of dating knows how frustrating that process is. But it’s proven to be incredible in the end. We’ve found amazing people to work with.”

The result is their debut full-length album, which is set for a March 18 release. “With ‘Cold Sheets’ we made what I’d probably call a ‘wine record,’” Mason says. “You play it, sit around, drink some wine. This one’s more of a ‘whiskey record.’ It has more of our live-show vibe in it, which is energetic and fun. We wanted it to have bigger sounds and more elements.”

With the project, the two are focusing heavily on their fans and supporters. Their music has helped them build a devoted fan base across the country, so they’re turning to the fans for support with the album release. They believe in creating a sense of community around their records, so The Roosevelts decided a campaign on the Kickstarter crowdfunding platform would be the perfect driving force.

“For us, it’s all about establishing that connection,” Mason says. “The idea with Kickstarter is to have our supporters almost act as the label. The industry has changed so much. Today, artists are far more dependent on their listener base, fan base, or whoever digs what they’re doing to get from square one to step two.”

And that’s exactly what The Roosevelts are doing—asking people to invest in their careers, so they’re able to deliver more music and keep doing what they do best. “I hate asking for money, but it’s really cool to have our supporters behind it all,” Mason says. “In the long run, it’s healthier. It banishes that whole rock-star mentality and the thinking of—I did all of this by myself. It creates this massive sense of community.” This business model allows supporters to act as the driving force for the record, which in turn gives fans a greater sense of belonging.

“For us, Kickstarter has been an opportunity to get the record out in all the right ways,” Mason says. “That’s been the last big step for us. We had to establish a team here in Nashville initially. It’s like dominos. Without a team, you might make a little splash but then it’s over. You have to take the time to get all the pieces in place, and if it all stacks up, you’ve got something impressive.”

Mason and Kloess were able to create incentives and unique giveaways for Kickstarter supporters that have further encouraged fans to contribute. Things like dinner with the band, custom beard oil, a disposable camera with tour photos, and a personalized mix-tape are all available for those who want to donate.

With “Cold Sheets” we made what I’d probably call a “wine record.” You play it, sit around, drink some wine. This one’s more of a “whiskey record.”

“The funny thing is there’s this sense of mystery created around musicians and their lives, what actually goes on backstage, what happens on tour, you know,” Mason says. “We wanted to break down those barriers. The disposable camera is a fun one, because we thought it would be a way to capture strange tour moments and let people in on it all.”

Mason and Kloess both find joy in meeting fans, shaking hands and hearing stories of how their words and songs have affected others. “My favorite thing to do is talk to people after the shows, or hang around the merchandise booth. That’s what it’s all about. I love meeting people who feel connected to what we’re doing,” Mason says. “When we were first on the road, we realized that these songs actually mean something to people, and that’s what makes you want to keep doing it.”

Mason says that his time at Sewanee had a very direct influence on the new album. “Sewanee people are literally everywhere,” he says. “Every show that we play, there’s a small Sewanee reunion, or at least a collection of Sewanee people. It’s also saved us so much money, because people will offer us places to sleep, or they’ll take us out to dinner. They’re incredibly hospitable and kind. Having people help you out along the way becomes your lifeblood. That’s what allows you to push through and do the next tour and the next album. It’s been insanely valuable.”

The Roosevelts played in Sewanee for the first time in November 2015, when they were asked to open for Coolio during Homecoming weekend. “My fifth-grade self was so excited!” Mason says. “I remember walking to PE class in elementary school while singing ‘Gangster’s Paradise.’ It was great to bring new music and see all the professors and community members who are still there. Just going to Sewanee feels like coming home.”

Mason’s first true songwriting experience was at Sewanee, when he took a course from Don Huber. “It was so good!” he says. “It was my first songwriting class and the first time I had someone actually critique my stuff. He took us up to Nashville, and we visited the BMI offices. I remember going in those offices for the very first time, and looking around with such wide eyes. Now I have to go there all the time, and it’s crazy to think back to those earlier times.”

The camaraderie Mason felt while attending Sewanee has served as a driving force for his musical career. “We stick together and take care of our own, in all the right ways,” he says. “It’s like a brotherhood, and it’s just been awesome.”