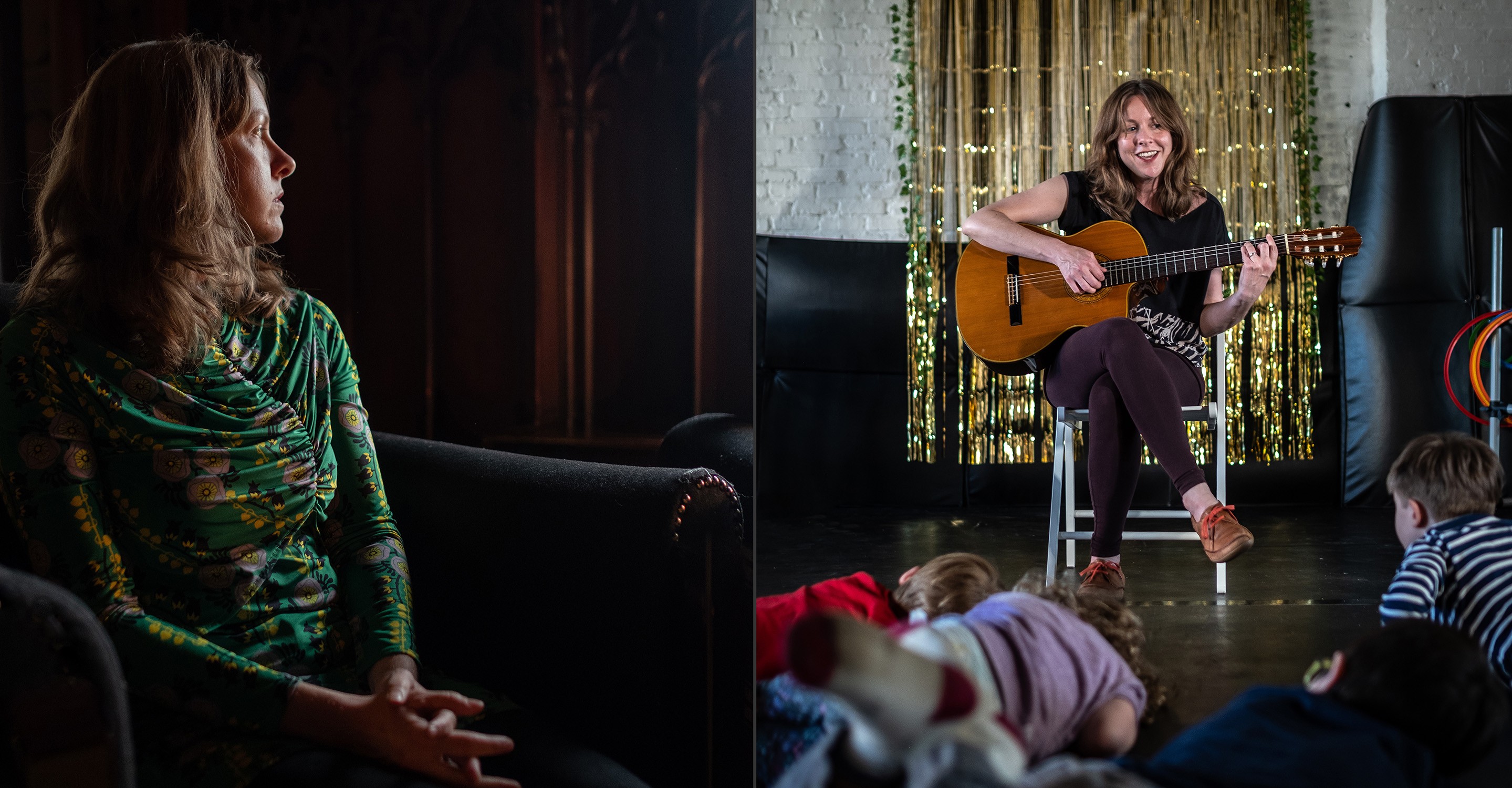 After the birth of her first child and a struggle with postpartum depression, a singer-songwriter shifts gears.

Angela Watkins, C’02, who performs under the name “Angela James,” crafts rich and heavy Americana songs, written to cut deep. Her music lends itself to a dark, quiet venue on an introspective evening, whiskey in hand.

But today, Watkins is at the Green Bean Day School and Nursery just north of downtown Chicago. A group of toddlers is being encouraged to settle down by their parents, who have arrived at the end of the day to pick them up, planning to pause briefly to enjoy some music. The nursery is one of many less-conventional venues that Watkins has been playing since the recent release of her third full length album, Quiet Night: A Collection of Lullabies. With the toddlers finally seated, Watkins begins a short set featuring songs from the album, strumming a guitar and using a looping pedal to harmonize with herself. It’s a beautiful effect, but this crowd is tough. After a few minutes, the kids begin to wriggle back to standing, and the set implodes. They aren’t ready for lullabies. Watkins knows how to read the room, so she finishes with the Beatles’ Drive My Car, much to the delight of the dancing group of toddlers.

Growing up in Loudon, Tennessee, in the foothills of the Smoky Mountains, Watkins had a natural aptitude for music. Her first memories of performing were in the back of her father’s pickup truck and then later singing What Child Is This? as a five-year-old, in church. She took guitar lessons as an early teen, and by the time she became a student at Sewanee, Watkins could be found performing with fellow students at Stirling’s Coffee House and an occasional round of cover songs at the Lambda Chi house. She imagined herself as a writer then, but not necessarily a songwriter.

Watkins met her husband, visual artist and musician Jordan Martins, C’02, at Sewanee. The couple moved to Brazil so that Martins could pursue an MFA from the Universidade Federal da Bahia in Salvador, and they eventually made their home in Chicago. When Watkins turned 30, she realized that she would regret it if she didn’t take a shot at a music career, so she dove into songwriting. In 2011, she began performing as Angela James, choosing to use her mother’s maiden name. Her first full-length album, Way Down Deep, was released in 2014.

Watkins has suffered from depression on and off throughout her life. Her songwriting is deeply personal and lays bare her struggle. Nowhere is this more apparent than in the lyrics of her second album, Time Will Tell, released in 2016. Watkins writes, “What if this becomes the last song I ever write? Words won’t flow and my voice runs dry, and this whole damn thing disappears?” After delaying parenthood to pursue music, Watkins was pregnant during the creation and release of the album. And for a time after giving birth, her fear seemed to be coming true.

Hattie was born in 2016. Watkins had not had an easy pregnancy, and difficulties with breastfeeding triggered an intense feeling of guilt. This led to panic attacks and a battle with postpartum depression. She grew scared to touch her child and even contemplated suicide. Her primary care physician realized something was wrong and encouraged Watkins to seek help, which she did.

Watkins felt like her music career was over. She couldn’t envision herself writing music again. “We’re all just pretending that we’re not broken individuals,” she says. “We’re all just pretending to have our s--- together and we don’t. We just don’t. That sense of vulnerability becomes really apparent when you’re trying to keep a small person alive.” But throughout Hattie’s infancy, Watkins found herself humming melodies while bouncing and rocking her baby to sleep. Eventually these melodies inspired words, and those words and melodies became love songs for her daughter. In Sun and Moon, she sings, “My love for you is limitless. It knows no space nor time. You brighten all my darkness. I can’t believe you’re mine.”

Eventually, Watkins began to envision an album of lullabies, and a project began to take shape as a form of personal transformation and therapy. She continued writing and invited other Chicago musicians and artists who were also new parents to collaborate. Quiet Night was released in April 2019. Watkins says there’s often an expectation that a musician will separate the “two lives” of being an artist and a parent. Working with other musician parents was a way to prove that it was possible to maintain a creative practice as a parent.

Watkins admits that she initially saw Quiet Night as a sort of artistic risk. “Most of my songs are about pondering big questions. These songs are more like ‘I love you. I’m tired. Go to sleep.’” She says that if you put the word “lullaby” on an album, some people aren’t going to listen to it. But considered in the context of her larger, very personal work, it seems to be an evolution—to Angela James as musician and mother. She says the project has allowed her to “disavow this whole notion of these things being separate.”

“Life is not always a party,” Watkins says. “There are people who think that kids’ music is supposed to be fun. You can’t talk about postpartum depression and kids’ music.” But being open about her struggle with depression has given Watkins a voice as an advocate for new mothers. She is invited to speak to groups like NYSSA, which focuses on helping women through the postpartum period. “If I can make someone else feel better about themselves having the same experience, because it’s normal, I will do everything I can,” she says. Watkins advises expectant mothers to plan ahead for the postpartum period. She says there are tons of information about pregnancy and breastfeeding and other aspects of motherhood, but that it’s important to seek help and plan to care for yourself, as well as your baby, after giving birth.

Hattie is now three years old, and Watkins is working hard on a new album. “My capacity to love is so much bigger,” she says of being a mother. “My ability to love and care for and teach and honor another person in this really specific way has expanded.” Her music reminds us that we were all born into this world by mothers. While the songs on Quiet Night were written as love songs to her own child, they also contain lessons for everyone, and remind us that we’re all in need of love—and rest.

Hear Angela James on the Nyssa: The Unmentionables podcast.