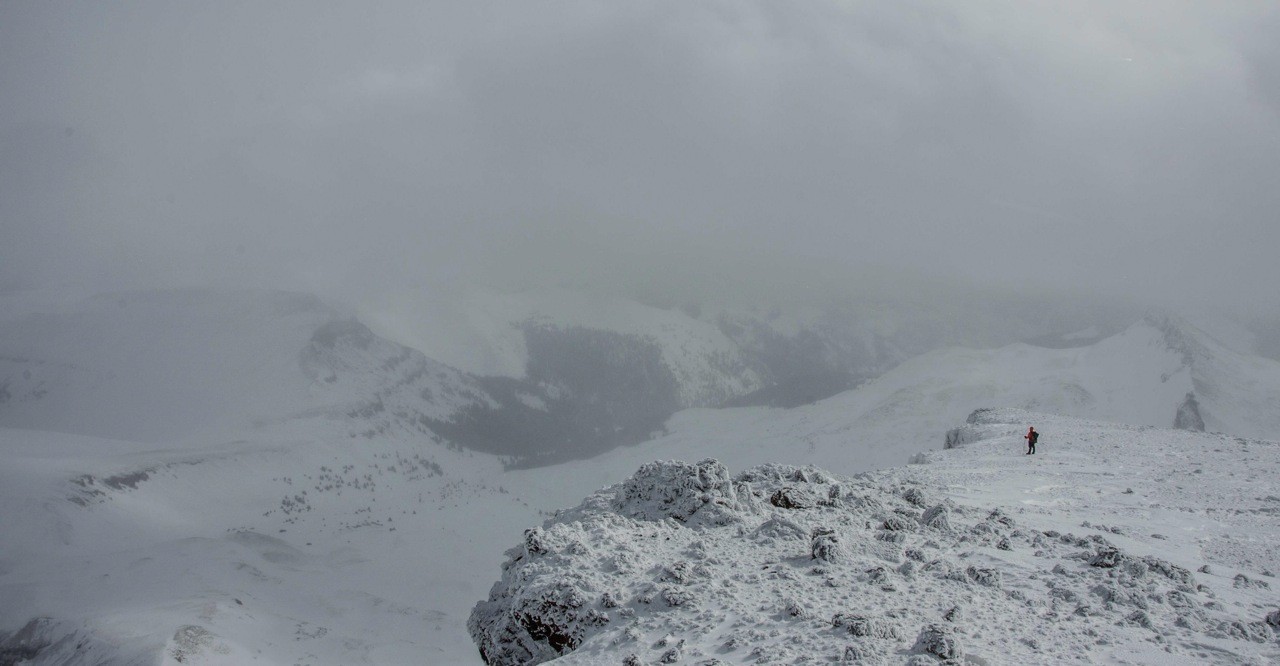 The Sewanee Outing Program takes on a 14,000-foot Colorado peak in subzero temperatures and a massive snowstorm.

F riday, Jan. 13, 2017, 6 a.m.: Everything is white—white clouds, white mountains, white aspens. Even my braided hair is encrusted by soft white frost. Just as we pass the timberline into vast expanses of treeless snow, the sun begins to rise, illuminating the snow and sky in progressively lighter shades of purple. Behind us, we leave four hours’ worth of trail, a continuous three-foot-wide trench of snow freshly compacted by the weight of our snowshoes. Eight more hours of similarly arduous trail-cutting lies ahead.

As the horizon continues to brighten, a faint outline begins to appear above us through the haze: Mount Uncompahgre, a daunting behemoth of rock rising to 14,308 feet of elevation, seemingly taunting our group of 10 to challenge its colossal majesty.

A distant thunder echoes from miles away, casting a silence over the group. We’ve learned to associate a deep whumph sound with snow compacting underfoot, but this is different. The origin of this rumble is likely snow and ice cascading down a distant cliff. Though the icefall is far from our planned route, it still manages to make us nervous. Sewanee Outing Program Director John Benson and Assistant Director Seth Burns, the only members of our group with extensive mountaineering experience, step aside to assess whether we should continue. This isn’t our first time up this trail, and if we turn back, it won’t be our first time failing to reach the summit.

For 14 years, John Benson and the Sewanee Outing Program have been taking students to the mountains around Lake City, Colorado, over Sewanee’s winter break for an annual mountaineering trip. It’s advertised as a “totally rockin’ 15-day adventure” and a life-changing, extremely challenging experience with some “uber-gnar” views. All of that proved to be true. Two days in a van with 11 other people, hours upon hours of snowshoeing, a daily menu of easy-cook meals and the resulting irregularities connect people in ways most college experiences can’t. A typical schedule from past trips includes three acclimation days spent hiking at around 11,000 feet and sleeping in a cabin, four days of camping and summiting 14,000-foot peaks (“14ers”), and two nights spent in yurts on the Continental Divide.

This trip, however, was far from typical.

When we arrived in Lake City, weather forecasts predicted huge snowstorms (an incoming “river of precipitation,” they said) that threatened to drop more than 15 feet of snow during the days we were planning to spend camping in the backcountry. Even the locals, people who would likely scoff at the prospect of a Southeastern snow day, were worried by the potential of these storms. Our leaders decided we would use the last day of sunshine, originally intended to be a rest day, to our advantage.

After two days of acclimation, we felt ready to conquer our first 14er: Uncompahgre (pronounced un-cum-POG-ray), the sixth highest summit in the Rocky Mountains.

On Saturday, Jan. 7, we were on the mountain by 5 a.m., and our group was both nervous and excited. We were looking toward a 14-hour day of cutting trail, postholing, and using ice axes to gain the summit, later making it back by way of the morning’s route. Initially, our steps were awkward as we familiarized ourselves with the gait required by snowshoes. We fumbled with our many-layered clothing, trying to find a balance between the -5F of the air and our own body temperatures. Step by step, we made our way through forests of tall pines, over babbling streams, and through gorgeous valleys blanketed in snow, surrounded by the seemingly endless panorama of the shining San Juan Mountains in the soft morning glow.

Thirteen hours later, we were back in the van. We had not reached the summit. The most harrowing part of our unsuccessful ascent was saying goodbye to two members of our team who had pre-existing injuries that were aggravated by the traverse, forcing them to return home. Their decision to leave was honest, brave, and the healthiest thing to do. However, saying goodbye to two new friends, both unique in presence and spirit, left our group in shock. And the incoming winter storm, expected to hit during our first day in the backcountry, amplified our apprehensiveness about the coming week and the obstacles we would undoubtedly face.

Fortunately, thanks to positivity, teamwork, and informed leadership, our backcountry experience remained true to the description that had drawn us to the trip in the first place.

Traversing the Continental Divide—the largest hydrological mountainous divide in the United States—not only presented us with some awe-inspiring views and calf-burning ascents, but also time for connecting with one another. Three nights huddled up in yurts with the snowstorm shaking the walls, intense games of Go Fish, and tales of traversing to the latrine turned an assortment of people—each so different and so wonderful—into a strongly bonded team.

After our days in the backcountry, successful despite the storms, the trip approached its end. But we all knew there was something missing—gaining a 14er. Sunshine, Redcloud, and Handies, peaks popular on past trips, were inaccessible due to recent snowfall, leaving us with only one other option: round two with Uncompahgre.

We woke up at 1 a.m. and were at the trailhead by 2. Each of us carried packs weighted with gear, and, to our relief, later shed much of it three miles in as we set up camp. But even with lighter loads, the group’s apprehension was audible in several hours of silence. Just a week before, this same traverse sent two of us home.

As the sky began to brighten, so did our spirits. For the final time, we found ourselves isolated from the rest of the world, alone among the most beautiful landscape any of us had ever seen. To complete the last 200 feet of elevation, we had to scramble continuously and use ice axes to secure ourselves to the slope. I was extremely nervous, but several of us steadied our nerves by singing Diana Ross’s “Ain’t No Mountain High Enough,” each line carrying us closer to the top—“No wind, no rain or winter’s cold can stop me, baby.” And then we were there. We made it to the summit.

As I reflect on the adventure, I smile and am filled with an overwhelming sense of pride in what we accomplished as a group. Out there in Colorado, our bodies and minds were pushed past what we once thought were our limits. So many things went wrong, and the weather was less than ideal. But somehow, this trip, far from typical, taught me more than reaching any number of summits could. The view from the top of Uncompahgre was not only breathtaking, it inspired our group to reflect on the wonder of the world and the luck that had carried us to that point.

Wendell Berry once wrote, “It is not from ourselves that we learn to be better than we are.” And this trip taught me that. Instead of learning from ourselves, we learn from our experiences, our failures, our triumphs, and the journeys in between.

The free online CSS code beautifier takes care of your dirty code and strips every unwanted mess. Go to the CSS Cleaner to get started.