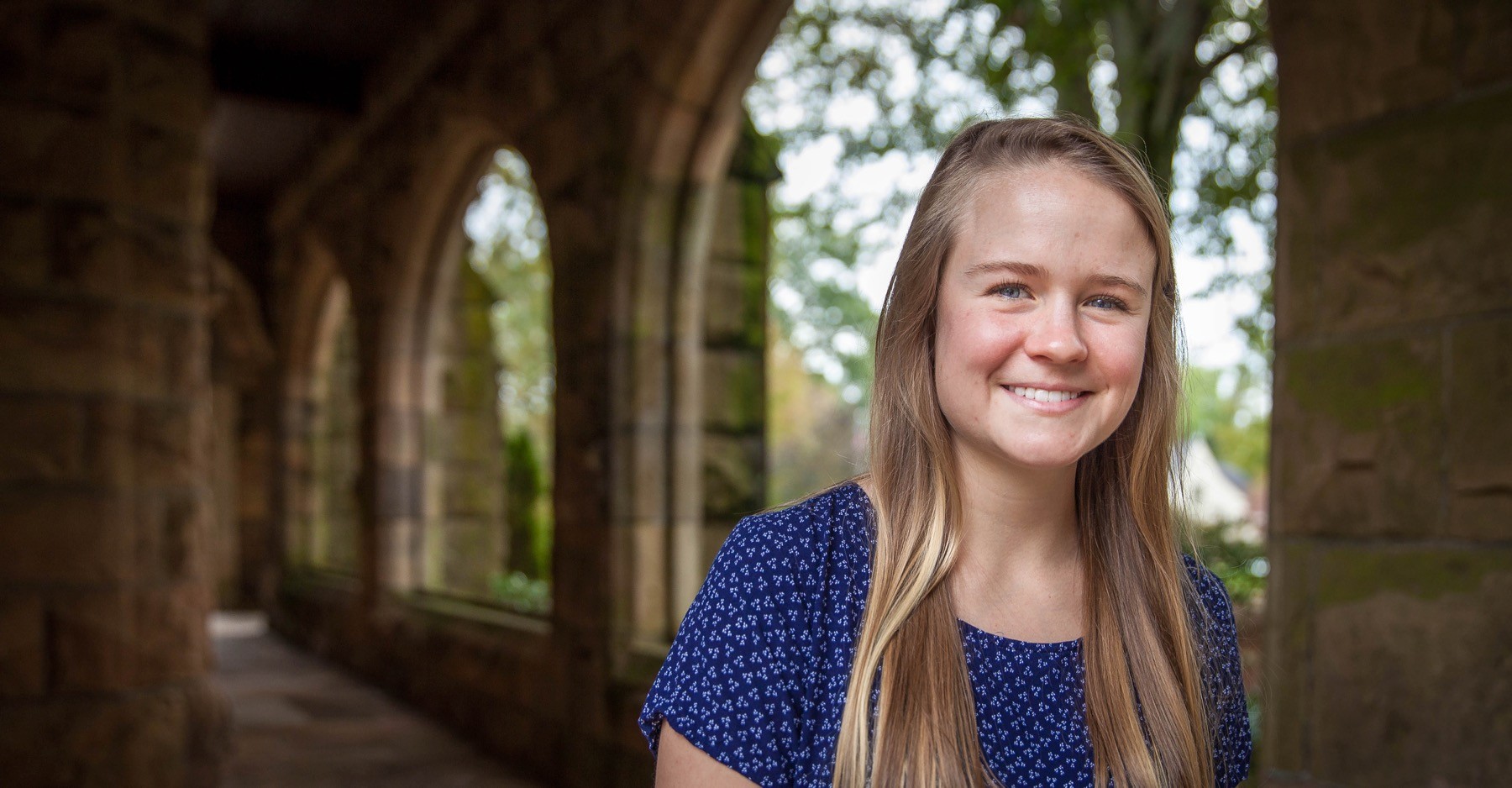 Thanks to ACE internship funding from Sewanee, Adrienne Davis, C'18, was able to spend the summer gaining valuable experience at the Department of Commerce's Economic Development Administration in Washington, D.C. Photo by Buck Butler

Exponential growth in the number of career-exploration internships limited to Sewanee applicants helps students find their way from the classroom to the boardroom and beyond.

B rody Roberts, C’17, graduated from Sewanee on May 14. A week later, he started his new job as a junior scientist in Oak Ridge, Tennessee, at an environmental consulting and remediation firm with projects across the Southeast United States. How did he make the quick transition from college student to employee? Roberts gives considerable credit to the funding Sewanee provided for two internships he held over the two summers before graduation.

In those internships with the City of Oak Ridge, he spent one summer monitoring wastewater to ensure that the city was complying with EPA discharge regulations and another summer working in a lab to ensure the quality of the city’s drinking water.

In his new job at Aerostar SES, he’s doing water-quality data analysis, directly applying what he learned as a natural resources and the environment major. When Aerostar saw Roberts’ résumé, he got an immediate offer—it was clear that he would need little on-the-job training.

“Sewanee’s internship program allowed me to take on internships I couldn’t normally [afford to] take,” he says. “You get professional experience you wouldn’t get waiting tables.”

“I got what people call ‘the Sewanee Experience,’” Roberts says. “And it was awesome.”

The internship program is a key element of Sewanee Career Readiness’s integrated approach to helping students position themselves for a successful post-college career path. The program manages a growing network of Sewanee-only opportunities, dedicated funds that provide students with grants to help defray the costs of taking internships in far-away or costly environments, and access to the University’s extensive alumni network.

The internship program got a big boost this year with additional funding provided by donors through the Sewanee Fund, a part of the University’s ongoing Stronger Truer Sewanee capital campaign. This past fiscal year, 97 percent of students seeking internship funding were supported, either by endowed funds or Sewanee Fund gifts. That’s up from an average of 74 percent in previous years.

During the summer of 2017, Sewanee students had 127 Sewanee-only internship opportunities for which they could apply, thanks to the ACE (A Career Exploration) summer internship program. Thanks to careful cultivation and the proven record of Sewanee students, the number of ACE internships has seen a more than 10-fold increase from the 12 internships offered in 2001, the year the program started.

Melissa Webb, who manages the program’s relationships with internship sponsors, plays down her role in the growth of the ACE program. “The growth of the program has been a great combination of opportunities we pursued and sponsors who found us,” she says. New sponsors may join the program after a one-off experience with a Sewanee student who happens to be selected for an open internship, but the sponsorships tend to become institutionalized thanks to the caliber of the Sewanee students.

For their part, sponsors—whether Sewanee-affiliated or not—frequently mention the care Webb takes in nurturing these relationships, the care she takes in presenting intern candidates, and how she keeps in touch to make sure the relationship works for all parties.

It’s a unique program that’s short on bureaucracy and long on results. Here are some more stories that illuminate this only-at-Sewanee approach to career discovery and preparation.

Kellyn Garrison of the Nature Conservancy, a global nonprofit organization, is a key staffer in the Conservancy’s Global Conservation Campaign. She’s based in Birmingham, Alabama, but her work involves the organization’s outposts around the world.

Since 2010, she’s selected a Sewanee student to work with her each summer. This summer, her intern was Jay Douglass, C’18, a history major. Garrison handed him a tough project—figuring out how to organize a complicated data set from Nature Conservancy offices all over the world.

“It was a tough project. I couldn’t show him an example [of how to organize the data].” In fact, she added, the earlier attempts to integrate the data hadn’t worked. “There was no inherently obvious way to do this.” But by the end of the summer, Douglass had created a template that is now being used internationally.

“I treat my Sewanee interns like one of my staff,” she says, “with high expectations.” Like many nonprofits, she doesn’t have funding to provide stipends, but because of Sewanee’s support, Garrison says, she can give the interns professional work. “I feel like I can do this because they are getting paid.”

Thanks to the success of interns like Douglass, Garrison isn’t shy about suggesting that other Nature Conservancy offices talk to Sewanee about becoming ACE sponsors, and now the Tennessee office is hosting Sewanee interns, too.

Adrienne Davis, C’18, a senior politics and economics double major, returned to Washington, D.C., this summer for a second internship, both of them made possible by Sewanee connections and internship stipend grants.

Davis spent this summer at the Department of Commerce’s Economic Development Administration (EDA), a federal agency that is charged with assisting regional economic development, particularly in economically distressed areas.

She found out about the internship opportunity via TigerNet, a Sewanee-only job and internship site. For a number of years, the EDA has been posting opportunities for summer internships on TigerNet. Sewanee is one of a select number of schools that EDA regularly recruits from, and most years one or two Sewanee students head to Washington thanks to this connection.

Without the internship stipend, Davis says, she would not have been able to take the EDA opportunity. The funding was “generous” and “completely crucial.”

“I feel so blessed to have had this opportunity.”

Her Washington experience has already had an impact on her career plans. Before the summer, she was planning to head to grad school, but after seeing how important legal skills were in the EDA, she’s changed her plan and now is planning on law school, a textbook example of the real-life implications of the ACE Internships.

Brad Peabody is a Sewanee alum, a Class of ’71 English major who went on to study law before joining the staff of the Maryland Office of the Public Defender, the state’s provider of legal representation for its indigent population. He’s an assistant public defender in the appellate division.

And he’s a serial provider of internships for Sewanee students who think law may be their career choice.

Peabody can bring Sewanee students to work in his office year after year because of the dedicated funding for internship stipends, and he puts his interns right to work, drafting briefs for appeals and doing major legal research projects.

“Sewanee doesn’t want you to be a gofer and copy-maker” with those stipends, he says. “Sewanee looks for the sort of internship that isn’t offered at a lot of places.”

Peabody takes on one intern per year. “It’s extremely rare that you get someone who isn’t putting out a maximum effort,” he notes. And one of his recent interns told him that the workload was “harder than my last three internships combined.”

He’s a little reticent about telling stories of the successes his interns have credited to his mentorship, but he does admit that on occasion he’s been asked to explain to a law school professor that, “Yes, it is true” that your first-year student does know how to write an appellate brief because she spent the summer drafting briefs.

Maptote is a small business, located at ground zero for Millennial hipness, Brooklyn, where it designs cool tote bags with whimsical local map designs, the sort of item an environmentally aware shopper carries when headed to the local farmer’s market.

The company’s founders and owners, wife and husband Rachel and Michael Berick, have never visited Sewanee and had never even heard of the school until seven years ago when they advertised for a summer intern and a Sewanee student applied. That intern went on to become the company’s first employee, and ever since, Maptote has been coming back to Sewanee, looking for more students who want a taste of life in New York.

Maptote likes Sewanee interns. They have an enthusiasm level that’s higher than recruits from New York schools, maybe because they are “excited to work at a Brooklyn business.”

The firm works closely with Sewanee’s Melissa Webb, and every year, they collaborate with her to find interns who can fill particular needs that come up, from design to sales to social media marketing.

Because the firm is small, the interns get a chance to see the whole business, including visits to the local factories where the company’s products are produced from U.S.-sourced cotton.

Rachel Berick says the fact that Sewanee supports interns with stipends makes taking a chance on New York possible—without the additional cash for living expenses, even a paid internship can be beyond the reach of many students.

Zsanett Peter, C’18, a biology major, won a place in the Yale program after her sophomore year, and the experience convinced her that her future lay in psychiatry. She also discovered an interest in issues around autism. She expected to train as a medical doctor.

This past summer, she did a second internship at Vanderbilt University Medical Center, working with a clinical psychiatrist. She had been offered a paid internship at Yale for the summer, but the position would be mainly administrative, and Peter wanted to work with patients, so she used the Sewanee network and Sewanee’s annual “Beyond the Gates” alumni networking weekend to locate an appropriate mentor, and, working with the mentor, crafted an application for internship support from the Sewanee Fund.

She spent this summer working directly with a special group of patients—autistic young adults with depression. Now, she says, she knows her career path. She’s completed all the coursework required to qualify for direct entry to a Vanderbilt graduate program that leads to a doctoral program and certification as a psychiatric nurse practitioner.

Peter says she has been helped repeatedly by Sewanee Career Readiness over her years at Sewanee. “They’re amazing. They go through everything, and they even helped me with my application letters.”

With this help, Peter has navigated a complex career discovery path, one that would daunt many students. Making the connections has perhaps been even a bit more complex for her—she is from Hungary and arrived at Sewanee because of a special scholarship set up by a Sewanee alum.