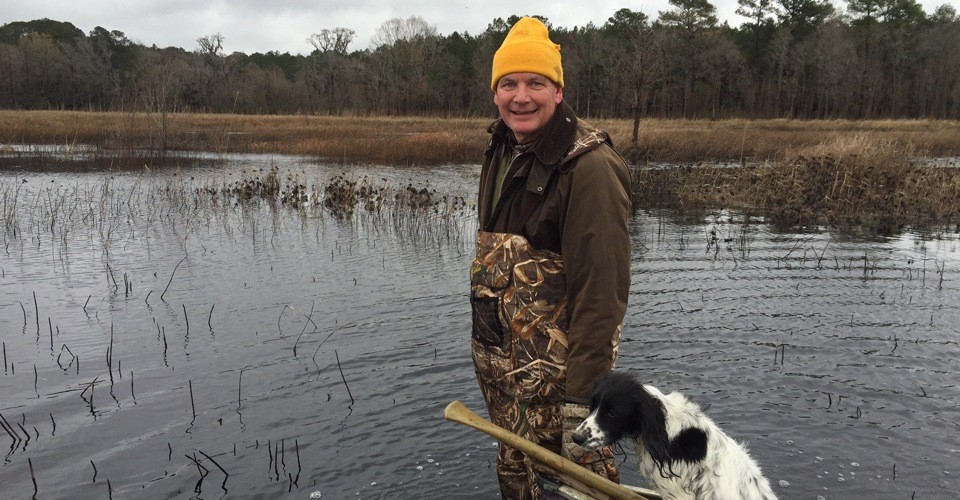 Jimmy Hagood, C’78, left the insurance industry to build a Southern specialty-food empire—and to become one of the country’s most decorated barbecue pitmasters along the way.

J immy Hagood’s first attempt at cooking a pig ended badly. Out in front of the Phi House at Sewanee, he and some buddies dug a pit, racked the hog, lit the fire, stoked the coals, and sat back for a long night of slow roasting and bourbon sipping. Then the skies opened up. An unremitting rain doused the fire. They had no recourse but to bury the pig on the spot and get on with the party.

If someone had told the forestry major back then that one day he would become a renowned pitmaster and owner of a Southern specialty-foods empire with products on the shelves of more than 300 grocery stores, he probably would have laughed them clear off the Domain.

At Sewanee, Hagood studied under Charles Cheston and interned one summer for a Lowcountry forestry consultant near Charleston, South Carolina, where he grew up. As graduation approached, young Hagood weighed his options. Some of his friends planned to enter the professional forestry world; some prepared for post-graduate academia; some set their eyes on finance in the Big Apple. For Hagood, one thing felt certain: He did not want to sit behind a desk.

Hagood is affable, easygoing, hard-working, spirited, a people person. These attributes translate well into the world of sales. So, after graduation, he took a job working for a flooring company that shipped him to Jackson, Mississippi, to sell floors to the hundreds of families whose houses had been devastated by the infamous Easter Flood of 1979.

Fast-forward a decade, and Hagood found himself back in Charleston working alongside his father at William M. Bird and Company, a Southeastern flooring-distribution company named for its founder, a Civil War gunrunner who launched the business in 1865. Hagood’s grandfather bought out the Bird descendants to make the company his own.

Jimmy Hagood was working for a solid family business, he was married and putting three children through school in a hometown he loved. Yet there was something missing. One day, the switchboard operator at William M. Bird looked up and joked affectionately, “Jimmy, one day we’ll be calling you ‘Mr. Hagood.’” That startled him. He realized he didn’t want to become the next Mr. Hagood. He was just fine with Jimmy. So he left the business in the very capable hands of his brothers Maybank and Robert, and set out on his own path, selling life insurance.

At this juncture, but unbeknownst to him at the time, the seeds for Hagood’s future culinary career were sown. Hagood’s mentor in the life insurance world was a man from Augusta, Georgia, Nick Zervos, who loved to cook, especially barbecue. The two hit it off sharing recipes and cooking techniques. Soon Hagood found himself honing his own barbecue game, strictly as a hobby. Hobby turned to passion. During the 1990s, Hagood threw his hat into a number of regional weekend barbecue competitions and walked away with honors. All the while, he kept his day job. Weekend barbecue contests segued naturally into catering gigs for friends, his church, parties, and charities.

“I was just exploring an avenue where I could express my culinary talents, so to speak,” says Hagood. “Then one day, my wife, Anne Marie, looked at me and said, ‘You know, if you’re ever going to pursue something along this path, now might be the time to do it.’ I was 45 years old. My three kids were in high school and heading toward college. (Little did I know I would have another child at age 50, which has been a tremendous blessing.) My wife and I agreed I should go for this.”

Thus, in 2002, Hagood took off his coat and tie and put on an apron. He quit his job as life insurance advisor at Wachovia to become a full-time barbecue caterer, building a pit room on Folly Road, just south of downtown Charleston, where he also began bottling his own sauces. Friends urged him to open a restaurant, but he couldn’t see himself stuck in one spot.

By 2005, Hagood’s line of barbecue sauces landed on the shelves of local Piggly Wigglys. From there, he extended his love of Southern food and Lowcountry foodways into other products. He pored over recipe books, consulted family cooks, and began experimenting in his kitchen, ultimately producing a line of relishes, chutneys, sauces, jellies, syrups, soups, and marinades that he markets under the name Food for the Southern Soul.

In yet another twist of serendipity, Hagood began growing his own heirloom rice, plus corn for a local distillery, and sugarcane for subtly sweet cane syrup, all on family property just down the coast in the bucolic ACE Basin. The farm is co-owned with his brothers and cousins, who primarily planted crops for hunting purposes and for wildlife. That is, until historic grains revivalist and miller Glenn Roberts approached Hagood about the possibility of growing an ancestral Southern rice called Carolina Gold. Hagood began by planting an acre or two. He now tends over 30 acres of a hybrid called Charleston Gold, known for its aromatic, nutty flavor profile, and sells the rice to multiple area restaurants. His Jimmy Red corn gets distilled into bourbon at local High Wire Distilling, and his sugarcane into High Wire’s French-style rhum agricole.

These days, Hagood finds himself in a pretty sweet spot. Orders pour in from coast to coast on the company’s website. Employees dutifully bag grits, and hand-pour okra soup into mason jars. They fire-roast tomatoes for Hagood’s recently launched Bloody Mary mixes, and bottle up Hagood’s extremely popular Tidewater Shrimp Sauce, a sauce and marinade that he took quite some time getting just right, first experimenting on his own children, in attempts to replicate fond memories of barbecued shrimp at New Orleans neighborhood haunt Pascal’s Manale (Hagood went to Tulane for two years before transferring to Sewanee.) His products ship to 48 states and fill shelves at stores like Fresh Market, Harris Teeter, Publix, and Lowe’s Foods.

“I like to tell people I’m in the export business,” laughs Hagood. “Not to China or to Europe, but it’s taking Southern food and selling it to the rest of the country. I see all the orders that come in on the website. It’s amazing how people find you.”

Between dropping his youngest daughter off at school, checking on operations, overseeing the farm, and hosting autumnal community gatherings where sugarcane is boiled down in antique kettles to make traditional cane syrup, Hagood still manages to squeeze in some pitmaster time. He even landed a coveted invitation to cook at the James Beard House in New York, the red carpet of the culinary world. Life is busy but balanced.

Hagood’s career path, in retrospect, took some unconventional turns, but developed organically. “I’m not one of these guys that went off to New York City, made a fortune, then came back and decided to retire and try something else. I went from one trench to another trench, working hard,” he says. “It wasn’t easy transitioning from the corporate world to a full-time culinary one, but for the first time in my life, I really felt like I was doing something that I was called to do. And that made me happy.”

As for that first pig, its bones are probably still preserved beneath the soil of the former Phi House. “You could say we gave it the good old college try,” says Hagood with a chuckle. “It turned into failure. But oftentimes, failure turns into success later on. It’s impossible to know in your early 20s where you’re going to end up.”

He muses for a split second, then adds, “I still don’t!”