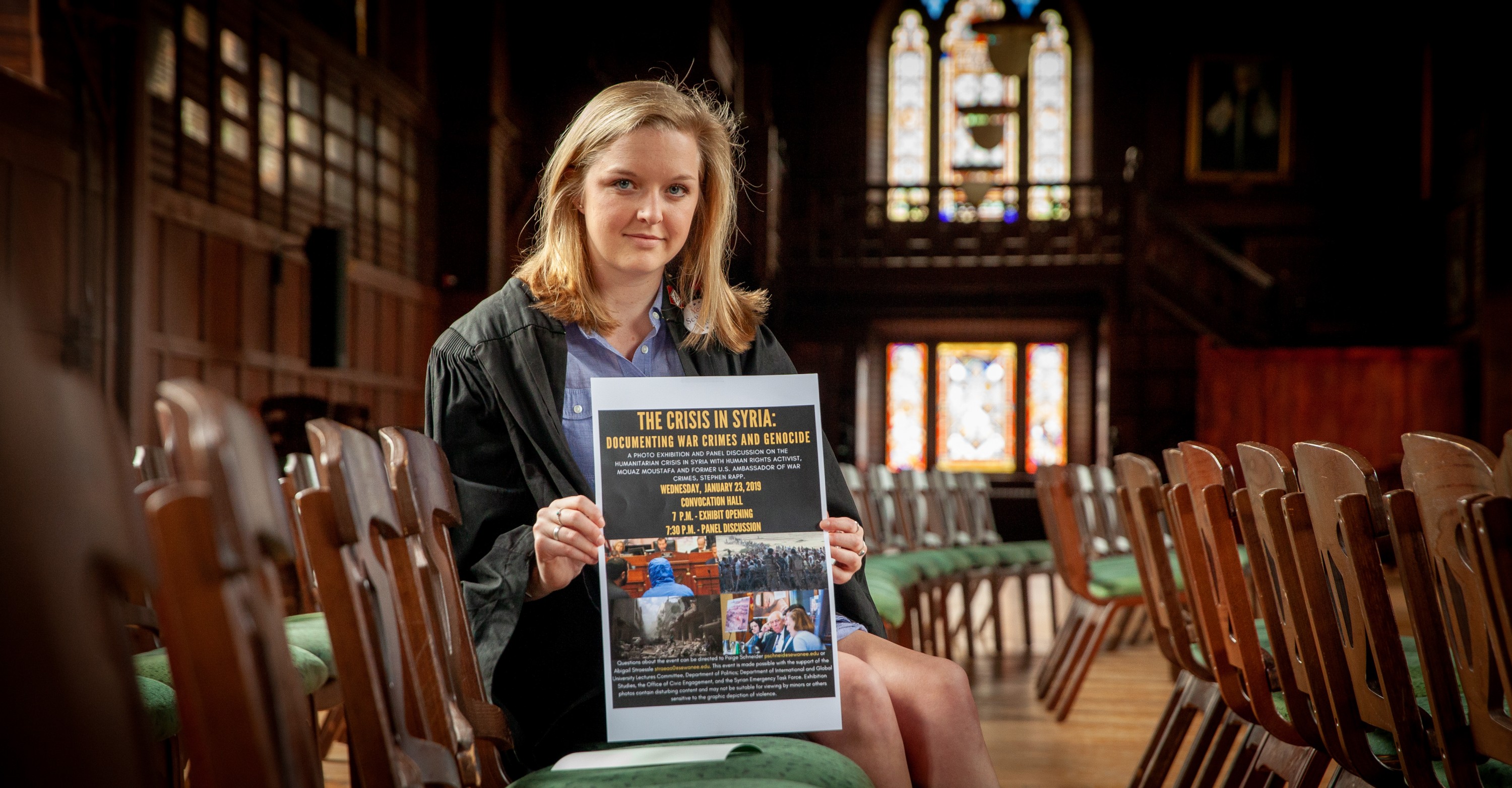 Abby Straessle in Convocation Hall, where the Caesar exhibit was accompanied by a panel discussion in January. Photo by Buck Butler

Inspired by a summer internship, a junior politics major works to enlighten fellow students about the worst humanitarian crisis of our time.

A foggy January night in Convocation Hall offered visitors a jarring tableau: Directly beneath an array of stately portraits of former University chancellors, a collection of photographs depicting the dead and mutilated bodies of victims of Syria’s Assad regime was on display. Nameless men, women, and children—scarred, mouths agape, eyes blurred out—were reduced to an identification number scrawled on each photograph. Dried blood caked their skin. Dust clung to their ragged clothes.

The gathered crowd of Sewanee students, faculty, staff, and community members milled around, viewing, with varying degrees of pity and terror, the photographs of the Caesar Exhibit, a collection of 55,000 photographs of men, women, and children who died while being held in detention in Syria. The photographs were taken by a former military policeman, code-named “Caesar,” who defected and smuggled them out of Syria to the United States.

The Caesar Exhibit has been displayed at universities around the country, including Harvard and Yale, as well as in the Italian Parliament, the U.K. Parliament, at the Holocaust Museum, and before the U.S. Congress. On Jan. 23, the horrific photographs that make up the exhibit arrived at Convocation Hall, along with human rights activist Mouaz Moustafa, former U.S. Ambassador-at-Large for War Crimes Issues Stephen Rapp, and Sewanee alumnus Jerry Adams, C’65.

The exhibit and the visitors were on campus thanks to the hard work of a Sewanee politics major from Little Rock, Arkansas. After her meaningful internship over the summer with Moustafa and the Syrian Emergency Task Force (SETF) in Little Rock, Abby Straessle, C’20, worked tirelessly to bring to Sewanee the knowledge that she had garnered.

“I knew that once Sewanee students knew the information that I had, they would want to do more,” she says.

The Syrian Emergency Task Force advocates for the freedom and democracy of the Syrian people while addressing the humanitarian crisis they are facing. Through a combination of fundraising, education, community engagement, and activism, the SETF engages in political advocacy, justice, humanitarian support, and construction of a civil society as part of its mission.

Moustafa, the executive director of the organization, read Straessle’s resume when it landed on his desk, and eventually interviewed and hired her without fully understanding the energy she would bring to the internship.

“I didn’t realize her potential,” he says, recalling their first contact. “She never said no to a task that we gave her.”

Moustafa is based in Washington, D.C., so Straessle worked primarily with SETF Director of Outreach Natalie Larrison. Under Larrison’s tutelage, Straessle spent the first week on the job learning about the Syrian crisis. They spent hours each day learning about how the humanitarian crisis started and why it continues, what the mission of the nonprofit was, what their end goals were, and what they wanted the public to know. By the end of the week, Straessle was doing research and learning about relevant issues on her own. A fascination had gripped her.

She spent the rest of her summer visiting churches and schools, bringing awareness of the Syrian crisis wherever she went. She initiated the Letters of Hope campaign, which invited people in the United States to write letters of encouragement to internally displaced peoples in Syria. These letters are collected and then sent to the SETF Field Director Jomah Alqasem in Gaziantep, Turkey, who then transports the letters inside Syria to distribute through their team on the ground.

Straessle managed and updated the campaign every day on social media, collecting letters throughout the summer. She organized a fundraising event in Little Rock to inform the community about the Syrian crisis and to educate them on ways they could take action. Their initial goal was to raise $2,000 to fund English books to send to the Wisdom House, a school and orphanage in Syria. They ended up raising $10,000.

“That was the coolest thing,” said Straessle. “I got to see myself in other people. I got to see other people learn about the crisis and the humanitarian aspect for the first time and see the shock on their faces, and it made me understand how powerful knowledge can be and how that produces action.”

After the event, she traveled to Washington, D.C., to continue her work with Moustafa. She sat in on lobbying efforts, and accompanied Moustafa to the staff offices of U.S. House members to talk to them about the needs of the Syrian people and how they could help. By the time her internship neared its end, Straessle knew that she wanted to share what she had learned with the Sewanee community.

She brainstormed possible events with her advisor and politics professor, Paige Schneider, and with Director of Community Development Nicky Hamilton. She called Moustafa, who suggested bringing the Caesar exhibit to the Mountain.

The accompanying panel featured Moustafa, Adams, and Rapp, with Associate Professor of Politics Rae Manacsa as moderator. Prior to the event, Moustafa, Adams, and Rapp met with students in politics and religion classes that had incorporated the Syrian crisis into their courses, and had lunch with students interested in a career with the State Department.

Adams, who serves on the advisory board for the Syrian Emergency Task Force and is a family friend of Straessle’s, was overwhelmed by the number of students, faculty, staff, and community members who attended the exhibit and stayed for the entirety of the panel discussion.

“It was very meaningful for me,” he says. “The quality of students and the quality of questions just reinforced my love for Sewanee.”

At the event, students were offered the opportunity to sign up for a newsletter run by Straessle. The following week, she set up a table in McClurg Dining Hall to encourage students to write letters to their congressional representatives. These letters pushed for the release of a Syrian-American, Majd Kamalmaz, who has been detained in Syria for almost two years. With the help of a few activist-minded students, Straessle collected about 50 letters.

“People usually don’t want to take time out of their lives to write letters to their senators and representatives, so it was perfect,” she says.

Moving forward, Straessle hopes to continue working with nonprofits, although her focus has shifted. Prior to working with the SETF, her interests lay in domestic issues, but now she plans to study post-conflict development and immigrant integration abroad in countries specifically with Syrian refugees such as Croatia, Hungary, and Bosnia.

“It definitely was a huge learning experience,” she says of her internship; “I went into it not knowing anything about Syria, or the crisis, or the refugees, or anything. And then leaving it, it felt like I could talk about it to anyone.”