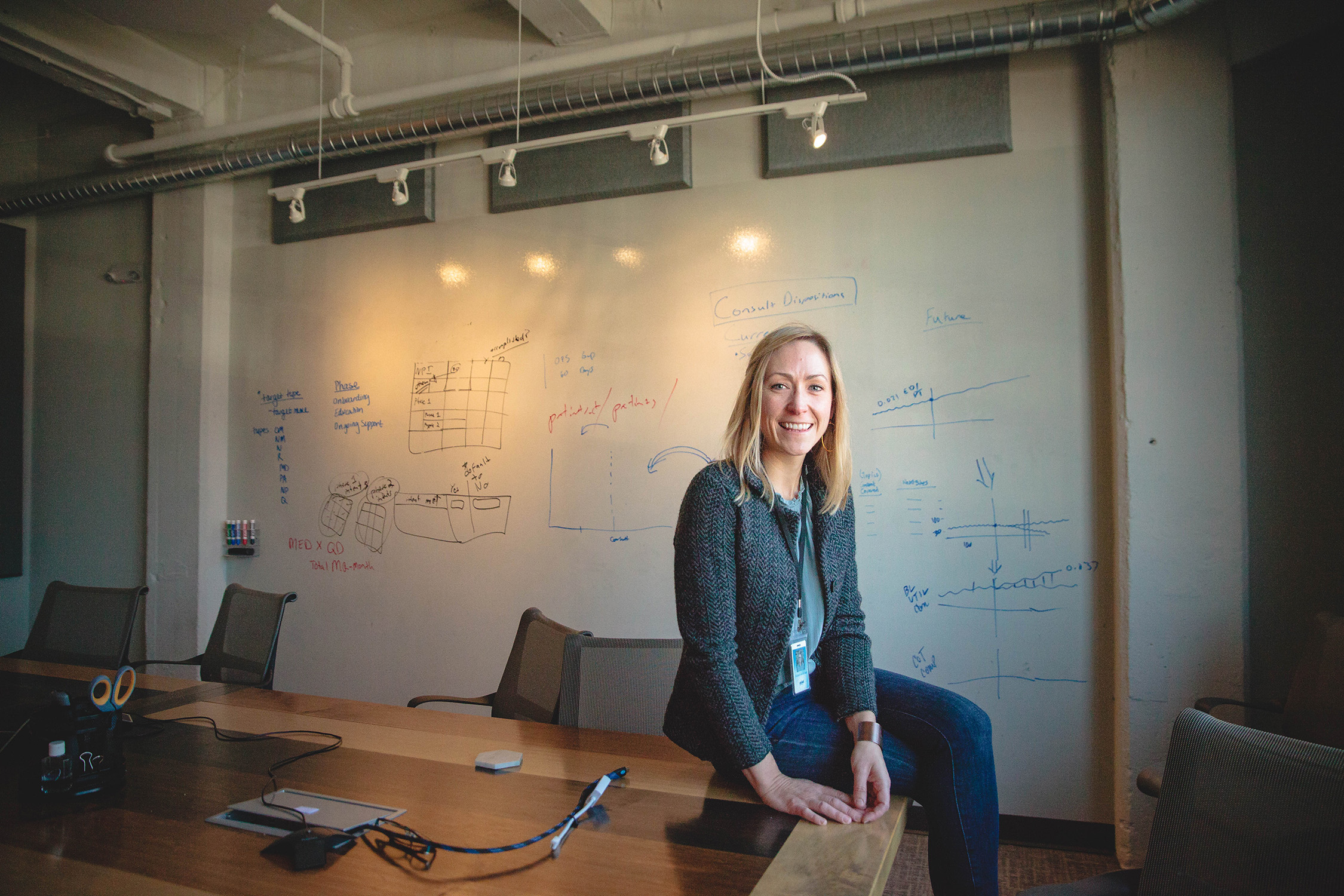 A New Prescription for Pain

At a Nashville startup, a Sewanee physics graduate and neuroscientist uses big data to find new ways to fight the country’s opioid epidemic.

When Elizabeth Ann Stringer, C’03, decided she wanted to transition from working in a laboratory as a research neuroscientist to working for a startup, entrepreneurs weren’t exactly racing to take her calls. But if research science had taught her anything, it was that patience is a virtue. And persistence pays off.

Stringer had spent nearly a decade studying pain and the effects of opioids on the brain when she was introduced to the co-founders of axialHealthcare, a Nashville-based pain and opioids solutions company. It was 2013, and while opioid abuse was capturing more headlines, it wasn’t yet being called an epidemic. Flash forward only three years, and experts were calling the state of opioid abuse in America worse than the AIDS epidemic at its peak. Utilizing big data and the latest clinical evidence, Stringer built the startup’s risk stratification and health population management models—systems that enable physicians to provide better pain management care to their patients and save health insurance providers money. Today, as chief science officer of axialHealthcare, she’s helping tackle one of the country’s most devastating public health crises.

Stringer didn’t want to go to Sewanee. Her maternal great-great-grandfather had attended the University, and her paternal grandfather came to Sewanee for seminary. Her father went to both the Sewanee Military Academy and the University. Her mother was in the first class of women, and her sister was a freshman at Sewanee when Stringer was a senior in high school. She wanted to do something different. “I said I would go anyplace but Sewanee, but lo and behold, I went to Sewanee,” Stringer recalls with a laugh. “There were a lot of schools I really liked, but I thought I wouldn’t have a better time anywhere than I would have at Sewanee. It felt like the right fit.”

And it was the right fit. For Stringer, born and raised in Nashville, attending a small liberal arts college as a physics major meant even smaller-than-usual classes and lots of one-on-one time with her professors. It also meant meaningful independent study that would prepare her for the job she has today, combining the rigors of intensive scientific research and data analysis with a self-motivated drive to solve problems.

While working on her degree in physics at Sewanee, Stringer took an internship at the National High Magnetic Field Laboratory in Tallahassee, Florida, where she conducted research around magnetic fields. “I loved the research I was doing, but it felt so isolated and not application-driven,” she says. “That was something that made me pause. Is this really what I want to do moving on in physics? I need something more grounded in the experience of human beings.” That insight would become a primary guiding principle throughout Stringer’s academic and professional career.

After graduation from Sewanee, she took a year off, declining a scholarship to Georgia Tech in favor of cooking in a kitchen in Athens, Georgia. The break turned out to be just what she needed, and when she returned to Nashville that next summer, she began work on her Ph.D. in neuroscience at Vanderbilt University. Through the Chemical and Physical Biology Program, Stringer was able to begin combining her interest in magnetic fields with her desire to do work that more closely touched the human experience, specifically through the study of fMRI, or functional magnetic resonance imaging.

“[With physics,] I was able to really understand what was going on with the technique that we were using to make measurements but then apply it to neuroscience and apply it to the human brain,” she says. “That’s what made the transition into neuroscience.” It was also at Vanderbilt where Stringer began to study pain, first investigating the divergence between touch and pain, and how they are processed in a healthy human brain.

While Stringer’s work at Vanderbilt brought her closer to the human side of scientific research, there was still more ground she wanted to cover. After earning her Ph.D. in 2010, she headed to Stanford University for her postdoctoral fellowship. “I really wanted to understand pain in a more clinical, applied setting. So as opposed to studying the way pain is processed in a healthy human brain, what about patients who are in chronic pain? What about patients who are using opioids? What does the processing in their brains look like?” Stringer says.

Working in the startup epicenter of the world, Stringer couldn’t help but catch the entrepreneurship bug in Palo Alto. And what excited her most about startup culture also happened to be what frustrated her most about academic research—the pace. One moved at lightning speed. The other, “a snail’s pace.” During her two and a half years at Stanford, Stringer studied the effects of opioids on the brain, taking small, incremental steps toward even larger and more complex questions about pain and the brain.

“I’m producing all this [research] and nobody is ever going to use this,” she remembers thinking. “And it would take forever to get it to a place where somebody would use it.” Like the experience during her college internship, Stringer found her connection to the work lacking. “Why was I drawn to science in the first place? How can I still get those same rewarding experiences of being a scientist without the things that I really don’t like about science?” She would find her answer not in Palo Alto, but back in Nashville.

Back in her hometown, Stringer was looking for work and started networking. She quickly realized, however, entrepreneurs weren’t exactly racing to take appointments with a research neuroscientist. But her efforts paid off and she connected with the cofounders of a new healthcare tech startup.

They were doing something different at axialHealthcare, and Stringer wanted in. By bringing together physicians, scientists, pharmacists, and technologists, axialHealthcare was on a mission to tackle the pain management system from the inside out, designing systems that would not only help physicians provide better care to their patients but would also save health insurance providers money. With her background in pain management research and data analysis, Stringer was a perfect fit for the organization and joined them in 2013.

In 2016, more than 42,000 Americans died of an opioid overdose, according to the most recent data reported from the Centers for Disease Control and Prevention. Accounting for 66 percent of all deaths by drug overdose for that year, researchers say the opioid epidemic is likely even worse than the numbers show. Today, more Americans die of an opioid overdose than from breast cancer. Between 2015 and 2016 alone, the total number of deaths from fentanyl or other synthetic opiates more than doubled from 9,580 to more than 19,000. The Council of Economic Advisers estimates that in 2015 the economic cost of the opioid epidemic in the United States was $504 billion.

Stringer, who built the organization’s risk stratification and health population management models, leads the data science and analytics teams at axialHealthcare. With a database of more than 100 million patients, Stringer and her team can identify the physicians who are treating patients taking opioids and determine both where improved care is needed and where patients might be in jeopardy of abusing pain medication. Partner pharmacists consult with physicians on pain and opioid best practices, and physicians have access to axialHealthcare’s decision support tools to help them make better pain management choices for their patients. All of this leads to better patient outcomes, less opioid abuse or misuse, and for health insurance providers, fewer downstream financial consequences.

“What we do is provide care pathways [to physicians] so they can properly assess the patient when they come in with a pain complaint. So they can really diagnose and understand what’s driving that pain. So they can address the pain trigger, not the pain itself,” she explains.

Since axialHealthcare’s founding in 2012, the company has raised just under $30 million. Results from a yearlong partnership with one of its participating networks in a Southeastern region particularly affected by opioid abuse showed a 17 percent decline in opioid prescriptions, coupled with a 12 percent decrease in opioid-related deaths. They also show a 26 percent decline in multi-prescriber activity as well as a 25 percent decline in polydrug activity, including co-prescribing with benzodiazepines. Today, the company is contracted with six large health care plans in four states with plans to expand further in 2018.

At axialHealthcare, Stringer’s diverse scientific and professional interests combine to provide something not only useful but lifesaving. They’re skillsets that serve a moving target. “You come in [to axialHealthcare] knowing you can have a really positive impact on the health care space as well as the public health space, and on society in general,” she says. “There are a lot of tentacles that the opioid epidemic has had across the nation, and we’re trying to combat that together.”