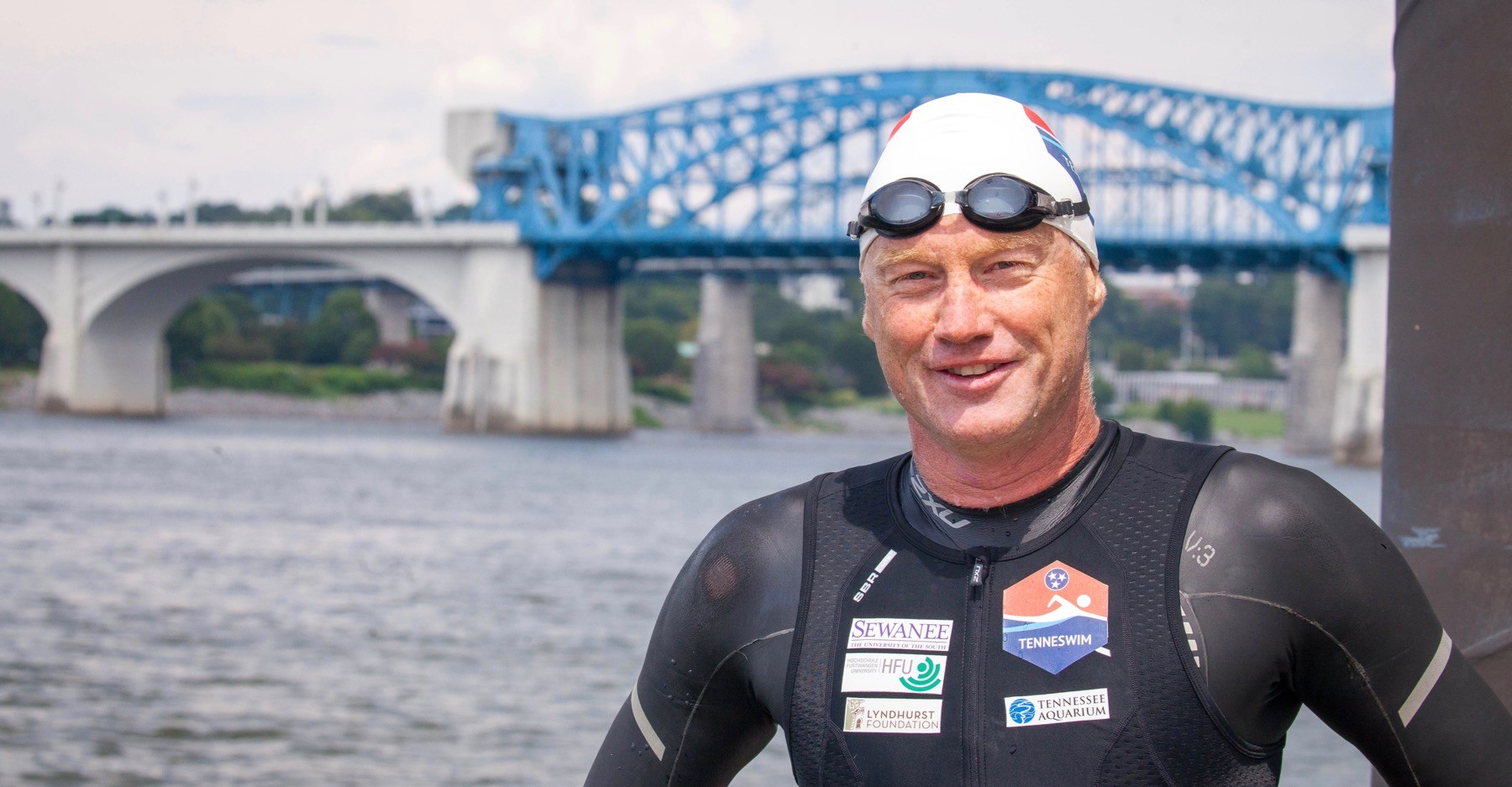 A Long Swim for Science

Professors from two continents team up to survey the health of the Tennessee River—for all of its 652 miles—one stroke at a time.

T en days in, the Tenneswim team takes a break, with 208 river miles behind them and 444 to go. Andreas Fath, a professor from the University of Furtwangen in Germany and the swimmer behind Tenneswim, completed a similar project in 2014, swimming the entire length of the Rhine River while completing a regime of water testing to shine light on water-quality issues. Now swimming the Tennessee River, he is collaborating with Martin Knoll, C’82, professor of geology at Sewanee, and a multi-institution partnership spanning four states.

As he exits an RV parked beside Knoll’s white frame house overlooking Abbo’s Alley in Sewanee, he holds a tray with several bottles of clear liquid, each containing a few white discs that look like small, flat coffee filters. As if in answer to a question, he begins without prompt, pointing to the right-hand bottle, which holds a disc that is somewhat less pristine than the others. “This one has been strapped to my wetsuit,” he says. “Now it is soaking in acetone to leach out the chemicals that have adsorbed.”

Those white discs are known as passive samplers, and they represent just one of the analyses that the Tenneswim project is performing to characterize the Tennessee River. Made of a polymer that adheres to complex chemical compounds, the samplers are put in a cage on Fath’s wetsuit, picking up pollutants as he swims. Whatever he swims through will show up later in the acetone, and he will compare the chemical signature with a library of 600 chemicals he has back in Germany. The samplers picked up 128 chemicals during his Rhine swim. These chemicals are often the persistent organic pollutants that have an adverse effect on both wildlife and human health.

Holding the tray, he stands next to a kitchen garbage bag, filled with trash from the RV: a plastic jug of spoiled milk, assorted packaging, and expired fruit. “I’m cleaning up because my family is joining us next week,” Fath says, as Marion Knoll, C’97, comes out the back door of the house talking on the phone, while simultaneously alerting her husband, Martin, that a guest has arrived.

“Come on in,” she says. “This is supposed to be a rest day, but everyone is working.” In the den, Martin Knoll is updating the project’s GoFundMe site, and Clark Lupton, C’17, is editing drone footage from the previous day’s swim. Knoll sons are milling about, and the house is a blur of activity. In the dining room, Fath and his master’s student, Juri Jander, have set up an infrared spectrometer on a long rustic dining table to analyze macroplastics (otherwise known as litter) they have found during the swim. Jander is a constant companion to Fath while he is in the water, paddling a kayak beside the swimmer to alert passing motorboats. He is also key to the research, studying microplastics (invisible particles) that are filtered from river water daily.

Two years ago, Knoll teamed up with Fath to conceive of Tenneswim when he was visiting Germany to scout locations for the comparative watershed course he offers to Sewanee students every two years. His trip coincided with Fath’s Rheines Wasser project, a swim of the entire river from source to the North Sea. “I heard about Andreas’s Rhine swim, and I wanted to meet him,” Knoll says. “I found out we had a lot in common: He’s a college professor and I’m a college professor. He has sons interested in swimming; I have sons interested in swimming. He’s interested in watershed-scale issues and so am I. So, as we talked, we wondered why not swim the Tennessee?”

The Tennessee River, though shorter than the Rhine, poses some obstacles for a long-distance swimmer, and Fath is feeling that fact on this day of rest. The water is warmer—quite warm, really, for someone working hard to plow through it. And whereas the Rhine has only one lake, Fath will have to swim through nine reservoirs with little current on the Tennessee.

“After I earned a doctorate, I was working in industry, and I was able to secure government funding for research—over €2.5 million. But then when I moved to the university, I was not as successful in getting grants, which was frustrating,” Fath says. He conceived of the Rhine swim as a way of attracting funding by drawing public attention to his research during the slow news days of August, when many Germans are on vacation. “It worked,” he says.

Another outcome of the Rhine swim, which the Tenneswim team hopes to replicate, is ongoing public outreach. Fath speaks to groups at least twice a month, sometimes discussing books he is writing about water-quality issues.

The principal issues Fath is studying have to do with chemicals in the water and plastics pollution. To put the latter in perspective, Fath is ready with a statistic: “By 2050, there will be more pieces of plastic in the oceans than fish.” While that is a startling image, it represents only a small part of the problem. Other concerns include microplastics (vanishingly small bits of plastic) that come from the breakdown of larger pieces as well as effluent from, for example, millions of washing machines discharging polyester-laden rinse water into municipal waste streams.

Microplastics represent an invisible but profound problem, which Tenneswim is measuring. Each day, Knoll and students pump 500 liters of river water through a filter as Tenneswim makes its stately progress downriver, stroke by stroke. The filters capture microparticles (algae, suspended soil solids, and the like) along with microplastics. In the analysis phase, Jander and Fath will isolate the microplastics from other solids and develop a statistical model for the amount of microplastics that move on the river each year. Hint: The amount will be in tons.

“We’re only getting part of the picture,” says Jander. “We’re pumping water from the top 15 centimeters, and the heavier microplastics are sinking to the bottom.”

Why microplastics might be an issue is not completely obvious. But some hints come from the passive sampler Fath is using to measure chemicals in the water. As pollutants bind to the polymers in the sampler, they also bind to the microplastics in the water. Fish ingest both, with the effects remaining to be known. One follow-up project, if funding is available, will be performing fish autopsies, conducted by Brandon Moore, an assistant professor biology at Sewanee. Another project is to make the invisible visible through a planned photography exhibition by Professor of Art Pradip Malde. Those efforts, along with a public-education program anchored by the Tennessee Aquarium, will all take place in the coming years and months, and the Tenneswim team is actively seeking funding to make sure the full value of the swim is realized. Principal contributors thus far have included the Lyndhurst and Riverview Foundations, the Tennessee Valley Authority, and Dan Rather, C’85. Partners including the Tennessee Aquarium, the Nature Conservancy, and other universities are making significant in-kind contributions to research and outreach.

“In developed countries, we have done a good job of correcting pollution from big sources such as industry, but every household is contributing to water pollution through daily decisions,” says Fath. “I’m trying to change behaviors, and it’s difficult,” he says, pointing to a plastic storage bag on the dining room table, an echo of the RV cleanup.

The confounding scale of these problems animates Tenneswim and explains why Fath is engaged in what he calls “scientainment.” “We hope to publish peer-reviewed papers in scientific journals, and we are educating a new generation of scientists, but a highly visible public-outreach project like this will reach many, many more people.” His hope is that by raising the public’s knowledge of the problem, people will demand change.