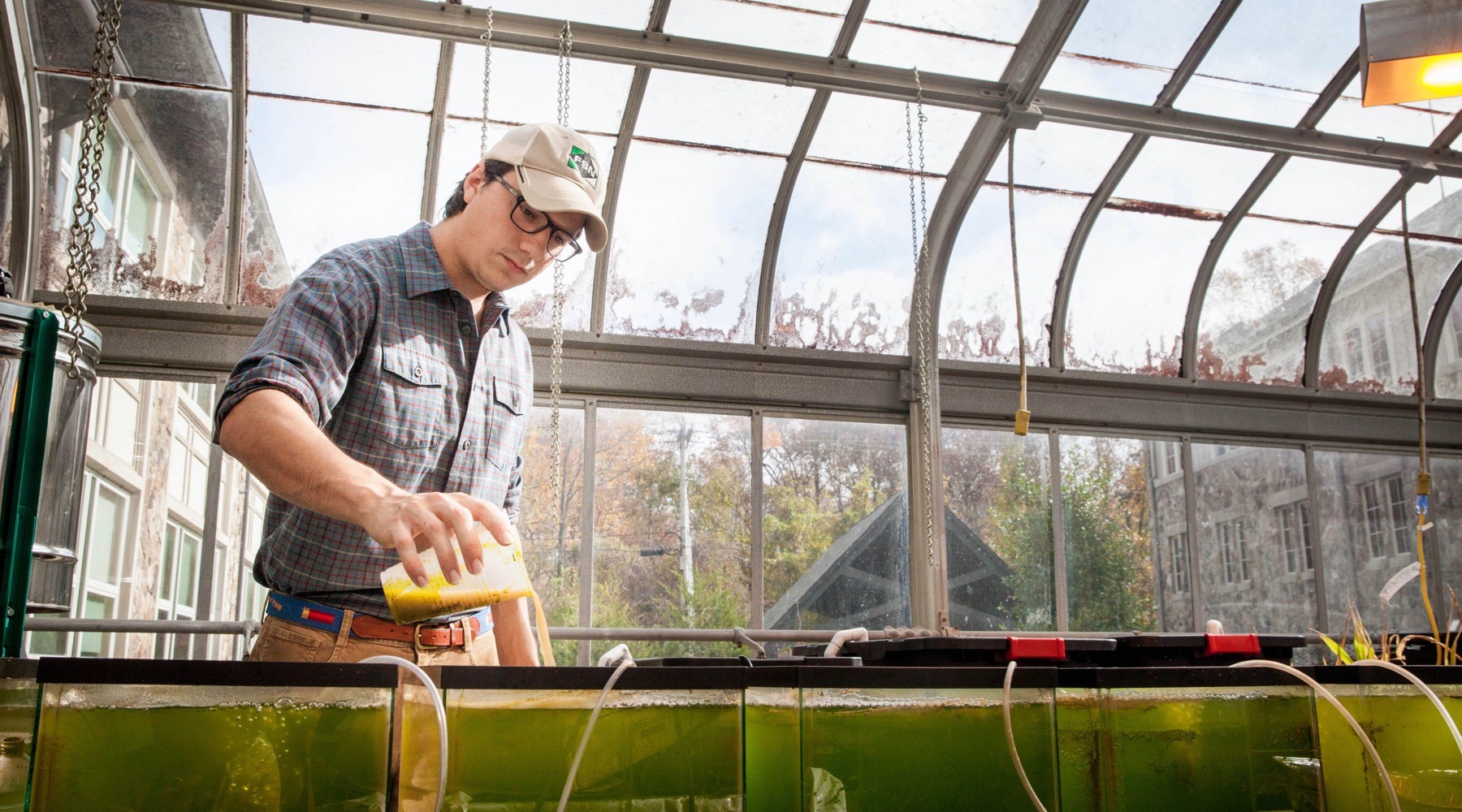 A Different Kind of Fish Farming

The University Farm explores an experimental aquaponics system to grow vegetables and save water on and beyond the Domain.

I n the fall of 2016, Sewanee found itself in the clutches of one of the worst droughts the region had ever seen. Classified by the U.S. Drought Monitor as severe, the drought meant that soils at the University Farm suffered for lack of rain. “I was running my irrigation water all the time, just trying to keep plants that are in the field alive,” says University Farm Manager Carolyn Hoagland.

Fortunately, there was already a solution in the works. Hoagland had experimented with aquaponics for environmental sustainability at the farm before the drought arrived. And now, a little more than a year after the drought, the system has been refined in ways that could extend its use well beyond the Domain. The project, already involving Sewanee students and faculty members, stands to expand to surrounding counties, particularly to farmers looking for a greener alternative to traditional farming.

Aquaponics is a system that combines aquaculture, the rearing of fish and other aquatic animals; and hydroponics, cultivating plants in water. Fish waste is collected and run through a biological filter, which turns the waste into a form that is used as plant fertilizer. The plants absorb the nutrients, after which the now clean water returns to the fish.

“An aquaponics system recycles all of its water, which makes it particularly useful during a drought,” says Ritchie Wai, an AmeriCorps Vista member based at the farm. “The only losses that you should have are evaporative losses.”

This closed-loop system is particularly efficient in tropical areas because the consistency of the warm temperature allows for effective production. One of the challenges facing the farm, however, is that Sewanee has a temperate climate. The farm is currently experimenting with native fish, including tuffies, a type of fathead minnow; bluegill; and catfish. So far, the fertilizer garnered from these fish has succeeded in growing herbs, but Hoagland would particularly like to see if they can produce lettuce, a staple of the University dining hall menu, through aquaponics.

There are other issues. The bacteria that convert fish waste into plant nutrients have a limited temperature range, and are heavily reliant on heat.

“The current challenge is that fish waste in a typical aquaponic system falls into a form that we call suspended solids,” says Hoagland. “It is difficult to separate that fish waste and move it into the biological filter where the bacteria do the conversion process.”

Luke Stallings, a senior at Sewanee undertaking an independent study project on aquaponics, has a solution. His goal is to expand the system and to increase production primarily by introducing a type of freshwater clam, Corbicula fluminea, commonly known as the Asian gold clam, to the system.

“The clam has incredible durability,” says Stallings. “It came across from Europe and Asia in the early 1900s, and since then it’s been in Canada all the way down the Eastern seaboard.”

The clams would filter out the suspended fish waste and algae bloom in the water column, consume them, and excrete the remainder in a semi-solid form, which would fall to the bottom of the tank. These solids would then be run through the biological filter, facilitating the process.

“We’re very much still in the research and the feasibility study stage,” says Wai. “We’ve only had one successful system, and that was in a greenhouse, so we’re trying to replicate something that is more complex than we may be capable of replicating. We’re taking an ecosystem and we’re trying to simplify it to variables that we can control.”

If everything goes well, Wai and Hoagland hope to introduce a cart-based aquaponics system to K–12 schools in the Franklin, Marion, and Grundy counties, so students can learn about aquatic ecosystems and nutrient recycling.

“Our hope is that not only will the students learn about it, but they’ll go home and tell their folks about this really cool system for growing fish and plants,” says Hoagland. “We’re hoping that it will encourage adults in the tri-county area to try aquaponics. The tropical system will elicit interest, and from there, folks can come to the University Farm and see what a temperate-based system will look like.”