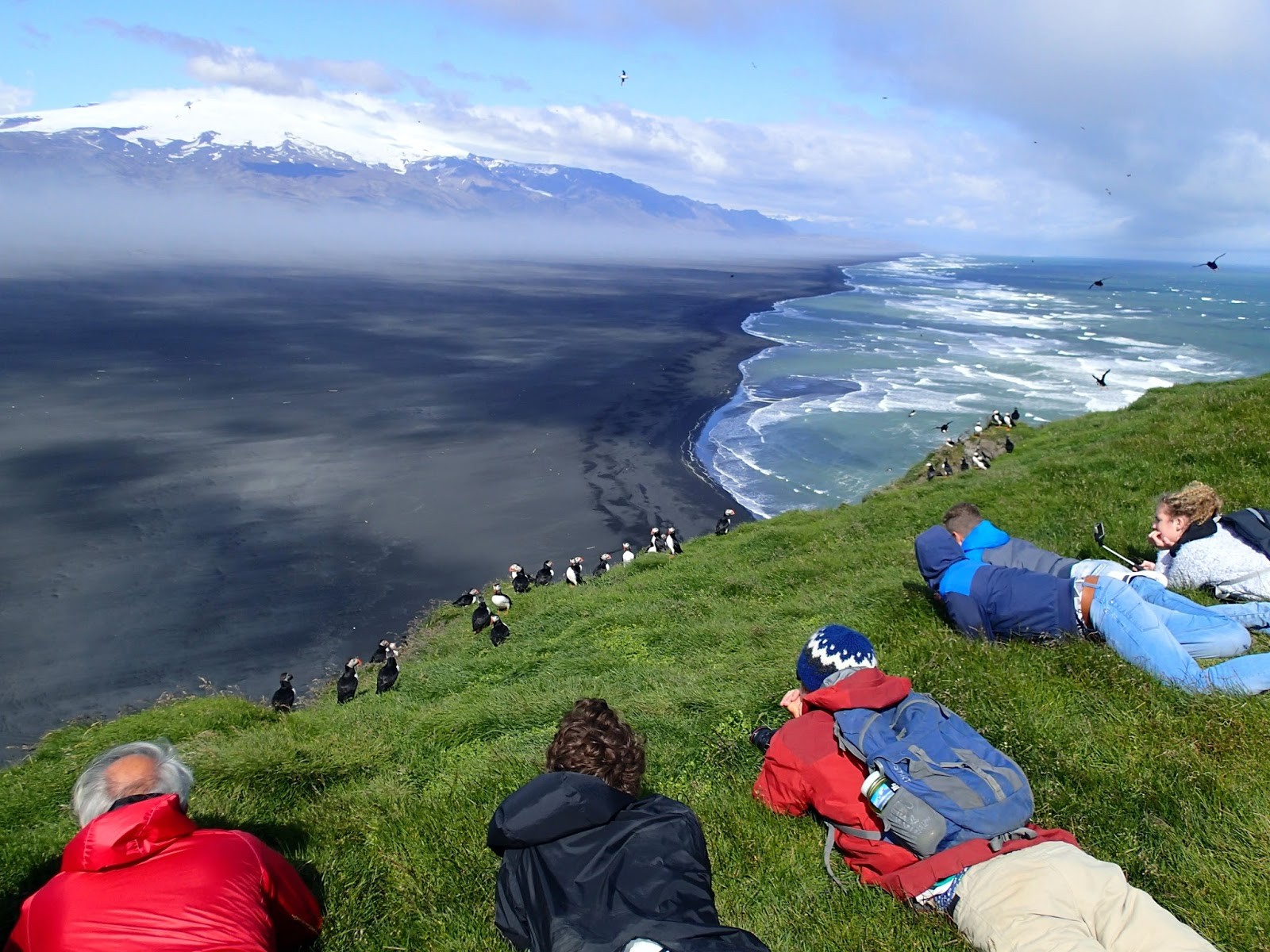 Watching the puffins fly around and nestle in their burrows. Photo by Russell Fielding

This summer, the field portion of a Sewanee course on global environmental change introduced students to the volcanic history, unique wildlife, and breathtaking vistas of the Land of Fire and Ice. 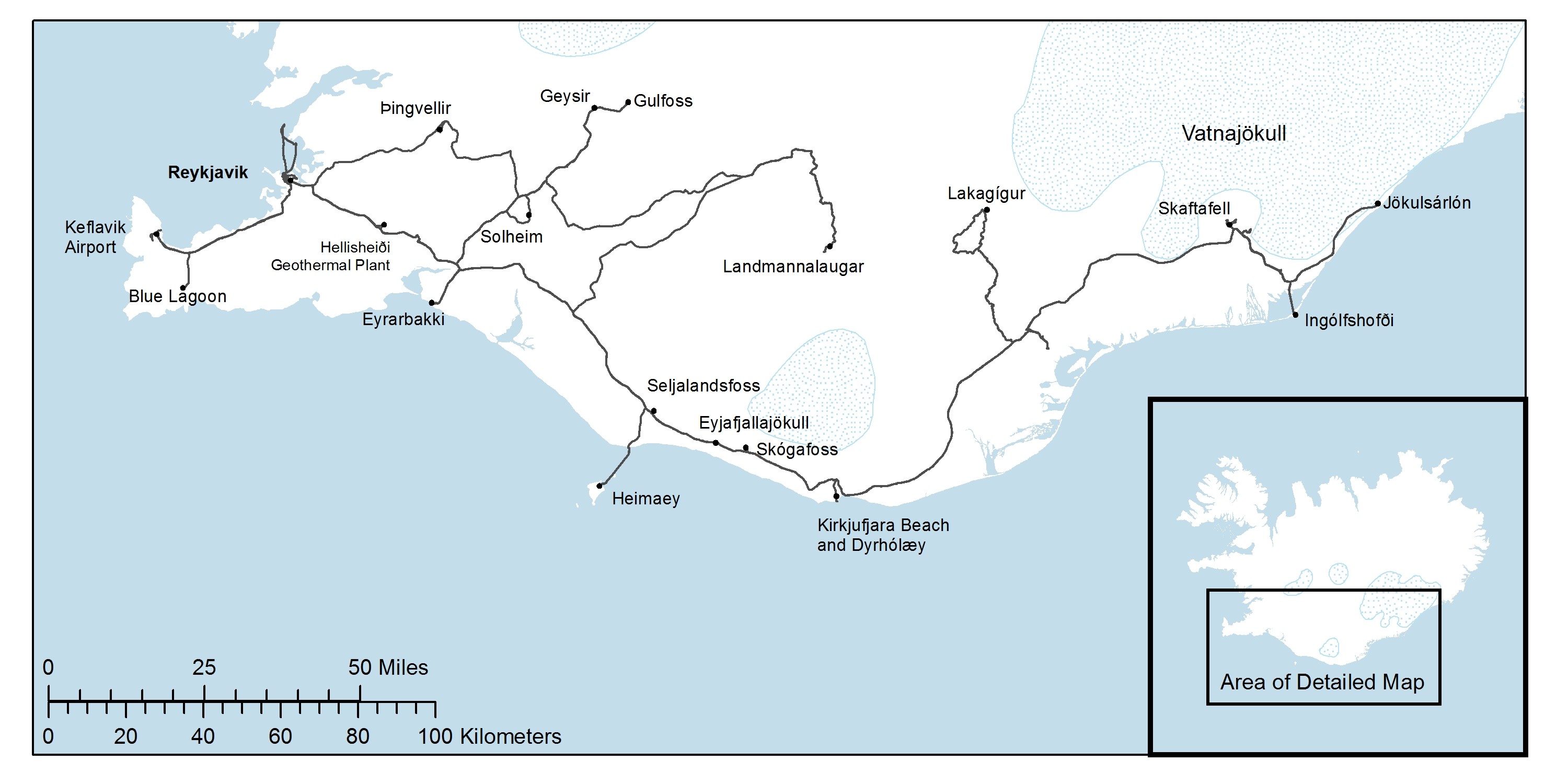 This summer, students in Assistant Professor of Environmental Studies Russell Fielding’s Sustainability and Global Environmental Change course got an up-close look at what they had been studying during Easter Semester: the natural resources and natural hazards of Iceland. Ten students joined Fielding and Chris Van de Ven for a 10-day tour of the island nation, examining themes of natural resource use and conservation, geothermal and hydroelectric energy policy, volcanism and glacial dynamics. The itinerary took the class from the capital city of Reykjavik to the Vatnajökull glacier, along the southern coast of the country and into some of the remote areas of the interior. Map by Chris Van de Ven, GIS instructor and manager of Sewanee's Landscape Analysis Lab. 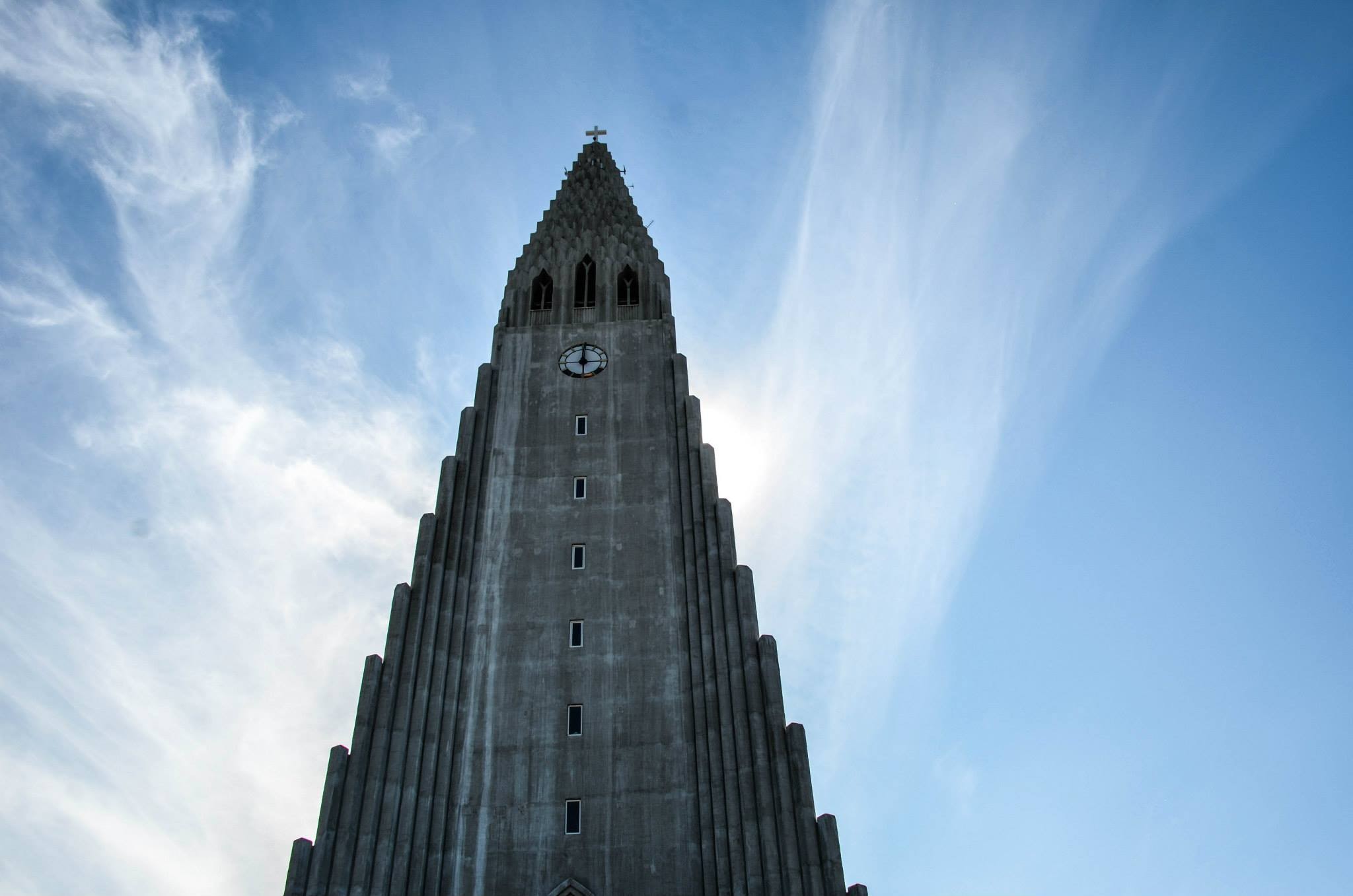 Day 1: A walking tour of Reykjavik included a stop at one of the country’s most distinctive architectural gems, Hallgrímskirkja, a Church of Iceland parish church designed to echo the country’s basalt lava columns. “I really loved seeing how the architecture was influenced by Iceland’s geology and then later seeing so many natural sites with columnar basalt,” says Baird Newbern, C’17. Photo by Emmie Oliver, C’16. 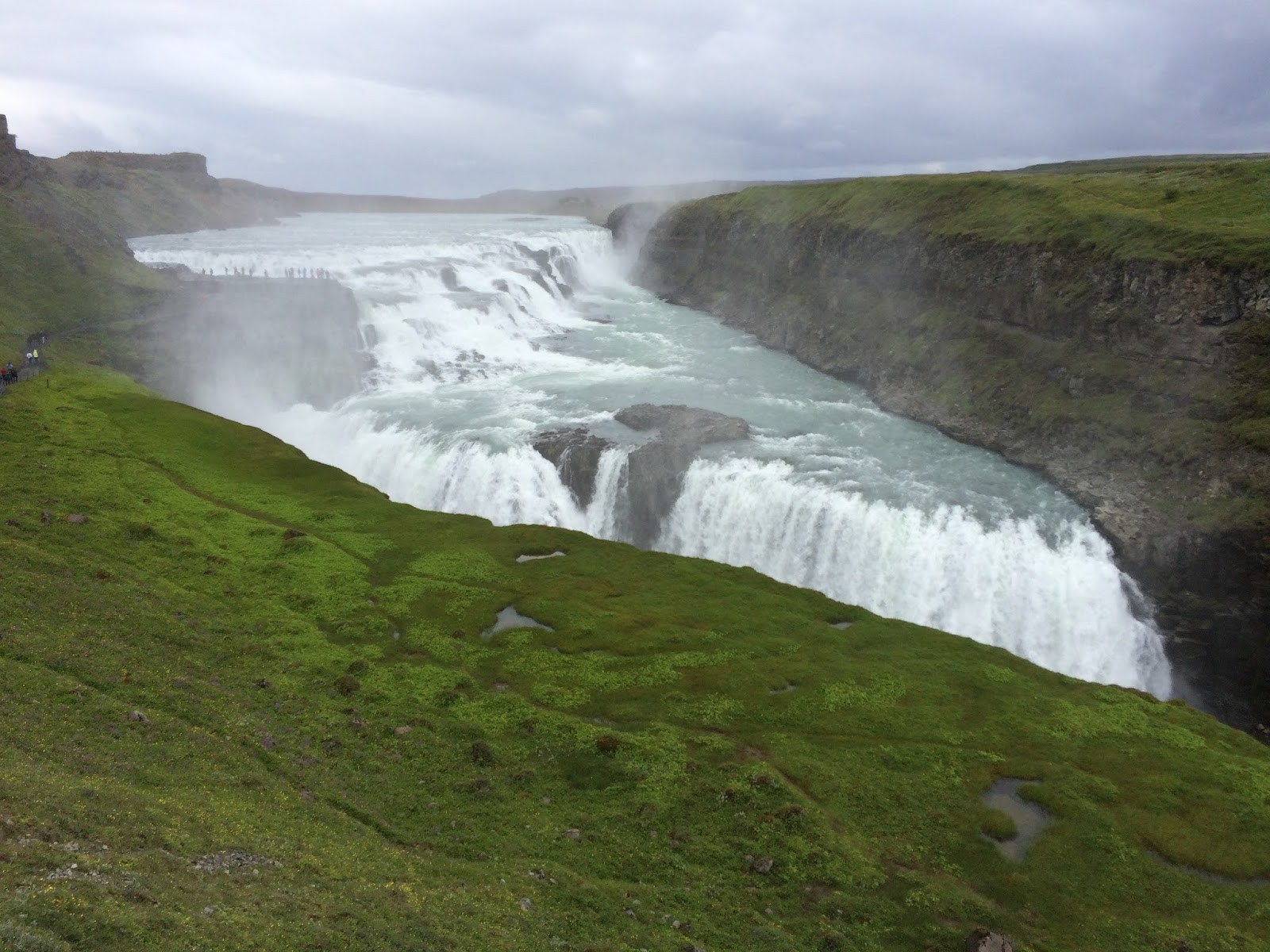 Day 2: “We visited Gulfoss, a large waterfall that was a potential hydroelectric site in the last century,” says Will Sogegian, C’17. “A local woman derailed the initiative by threatening to jump off the waterfall, and today the area retains all of its natural beauty.” Photo by Will Sogegian. 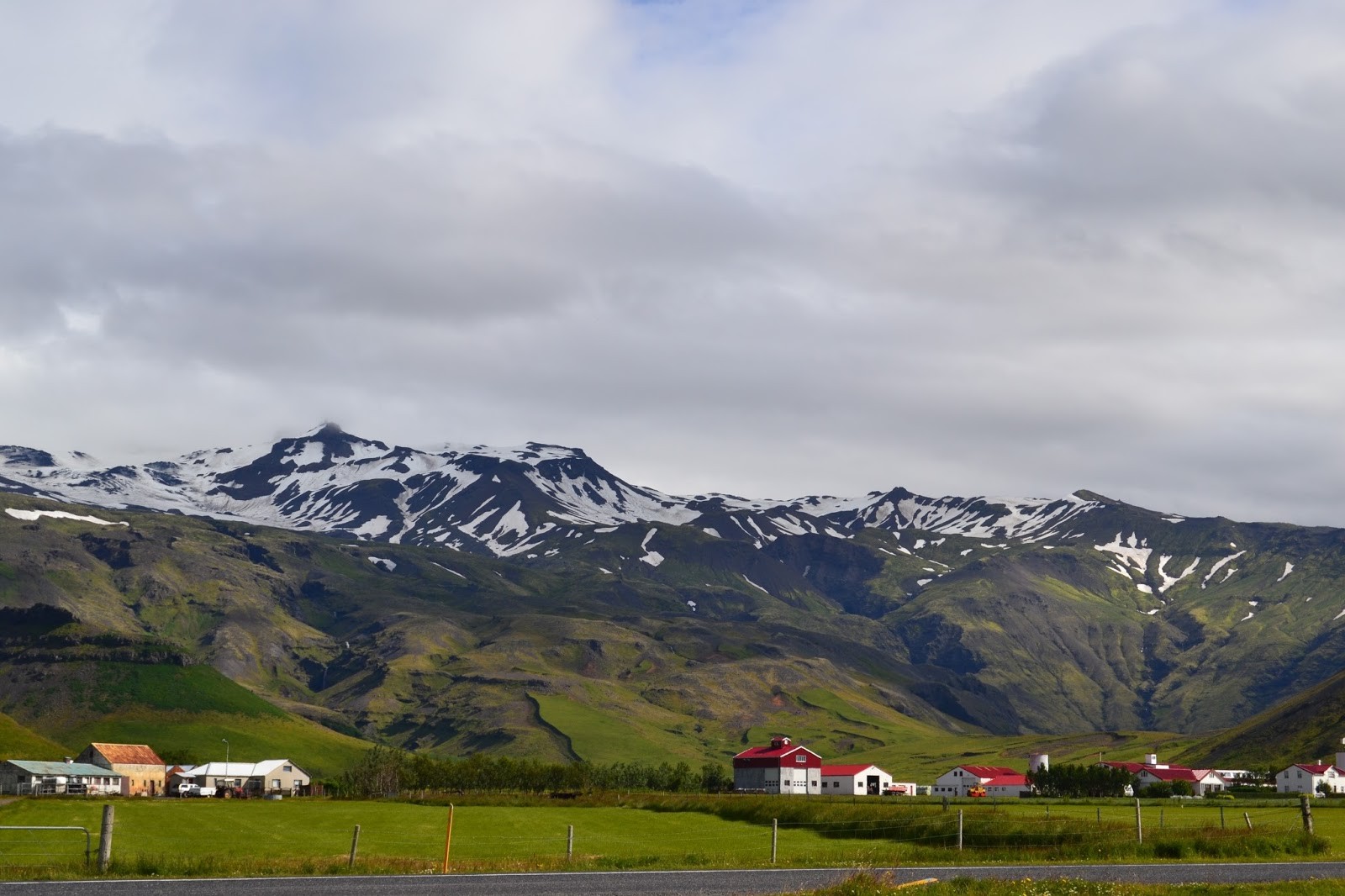 Day 3: In 2010, the eruptions of Eyjafjallajökull, seen here rising above local farms, disrupted flights from airports across the Northern Hemisphere. After the eruptions, ash covered large areas of northern Europe. “Our stop here put the power and force of these volcanoes and their effects into perspective,” says Sara Parks, C’16. Photo by Emmie Oliver. 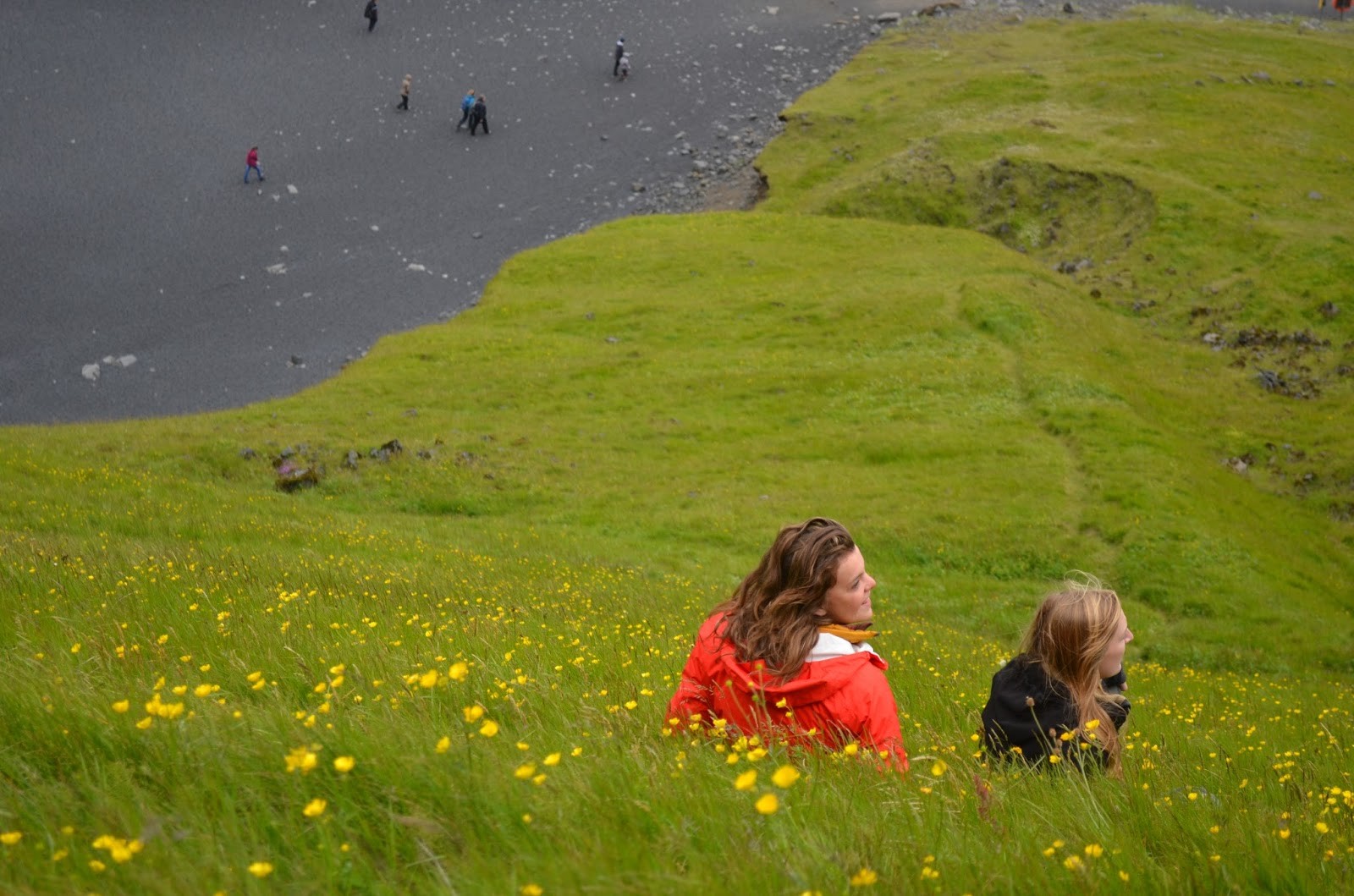 Day 3: The volcanic origins of Dyrholaey peninsula are evident along its black-sand beaches. “After taking advantage of Iceland’s unspoken rule of free refills of soup and coffee at our lunch stop, we put our newfound energy to use hiking up cliffs and roaming the beaches,” says Grace Gregory, C’16. Photo by Emmie Oliver. 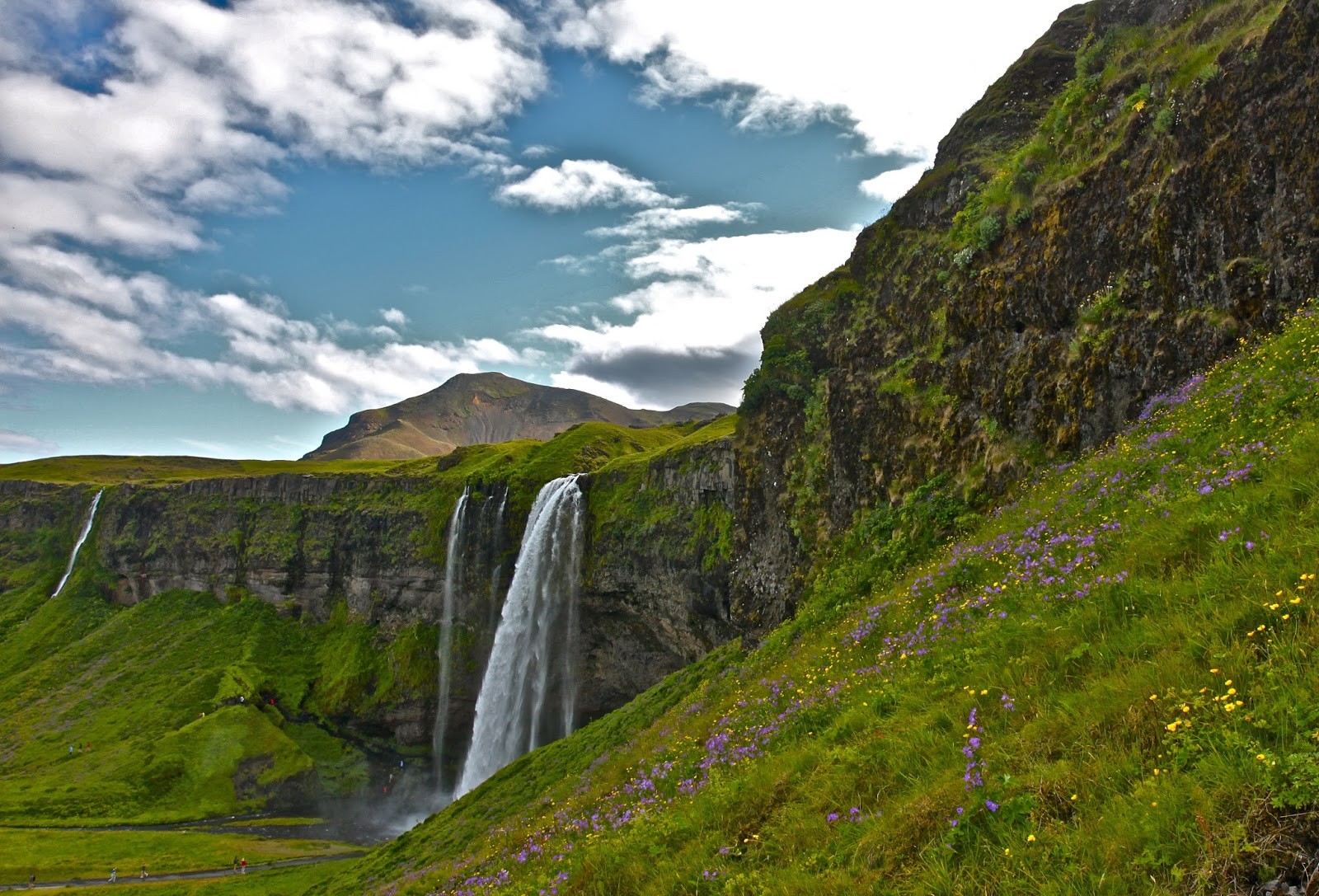 Day 3: Iceland experiences frequent rain and snow, and its near-Arctic location produces large glaciers whose summer melts feed many rivers. As a result, it is home to a number of large and powerful waterfalls. “Try as we might to heed TLC’s advice, we did indeed chase after a string of beautiful waterfalls,” says Grace Gregory. Photo by William Phelps, C’16. 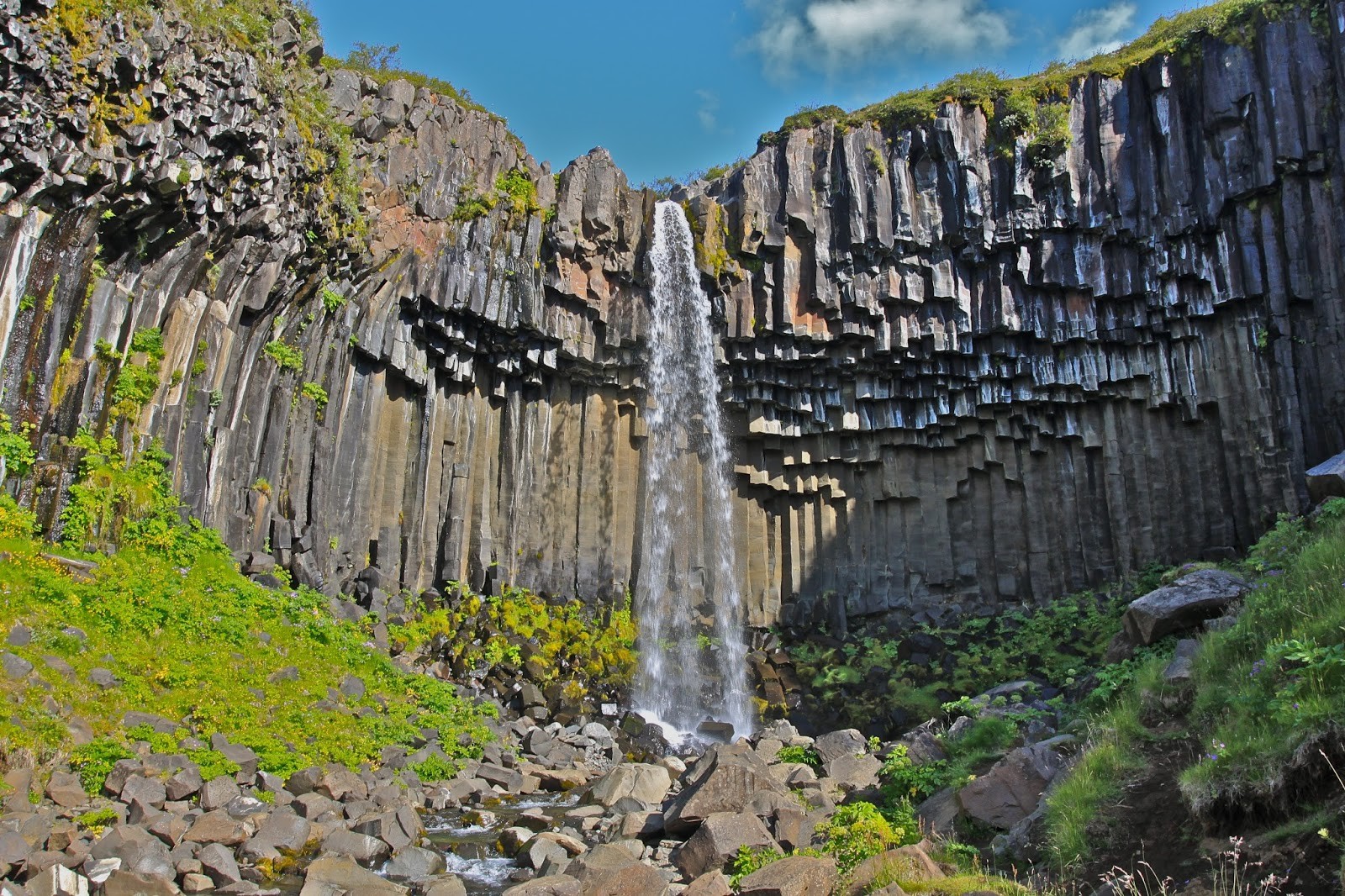 Day 4: “At Skaftafell, we hiked to a waterfall that was not only beautiful, but was also interesting geologically,” says Eva Faison, C’17. “The rock features surrounding the falls are columnar basalt, an igneous rock that occurs when the lava cools slowly and evenly throughout the structure, resulting in hexagonal columns that look like they are artificially carved.” Photo by Emmie Oliver. 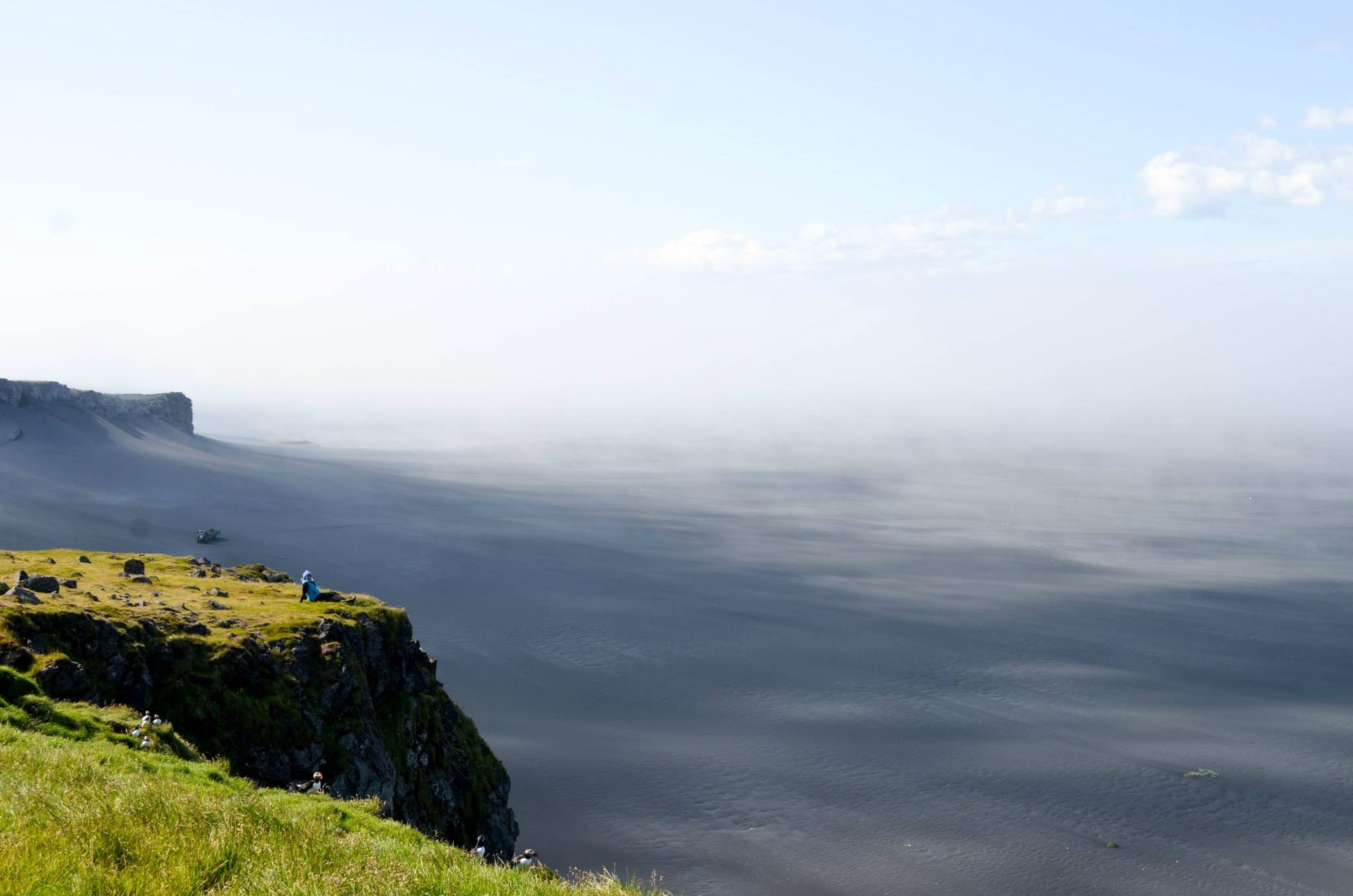 Day 4: “At Cape Ingolfshofdi, we took a tractor ride across the öræfi (Icelandic for ‘wasteland’),” says Emmie Oliver. “The landscape, the result of thousands of years of glacial flooding and runoff, was totally surreal. Flat black volcanic sand stretched as far as the eye could see.” Photo by Emmie Oliver.

Day 4: “After we crossed the öræfi, we climbed up to some cliffs where we found a surprise waiting for us: puffins!” says Emmie Oliver. “We spent about an hour hiking and watching the puffins fly around and nestle in their burrows. We even saw them catch fish and take them to their baby chicks.” Photo by Russell Fielding. 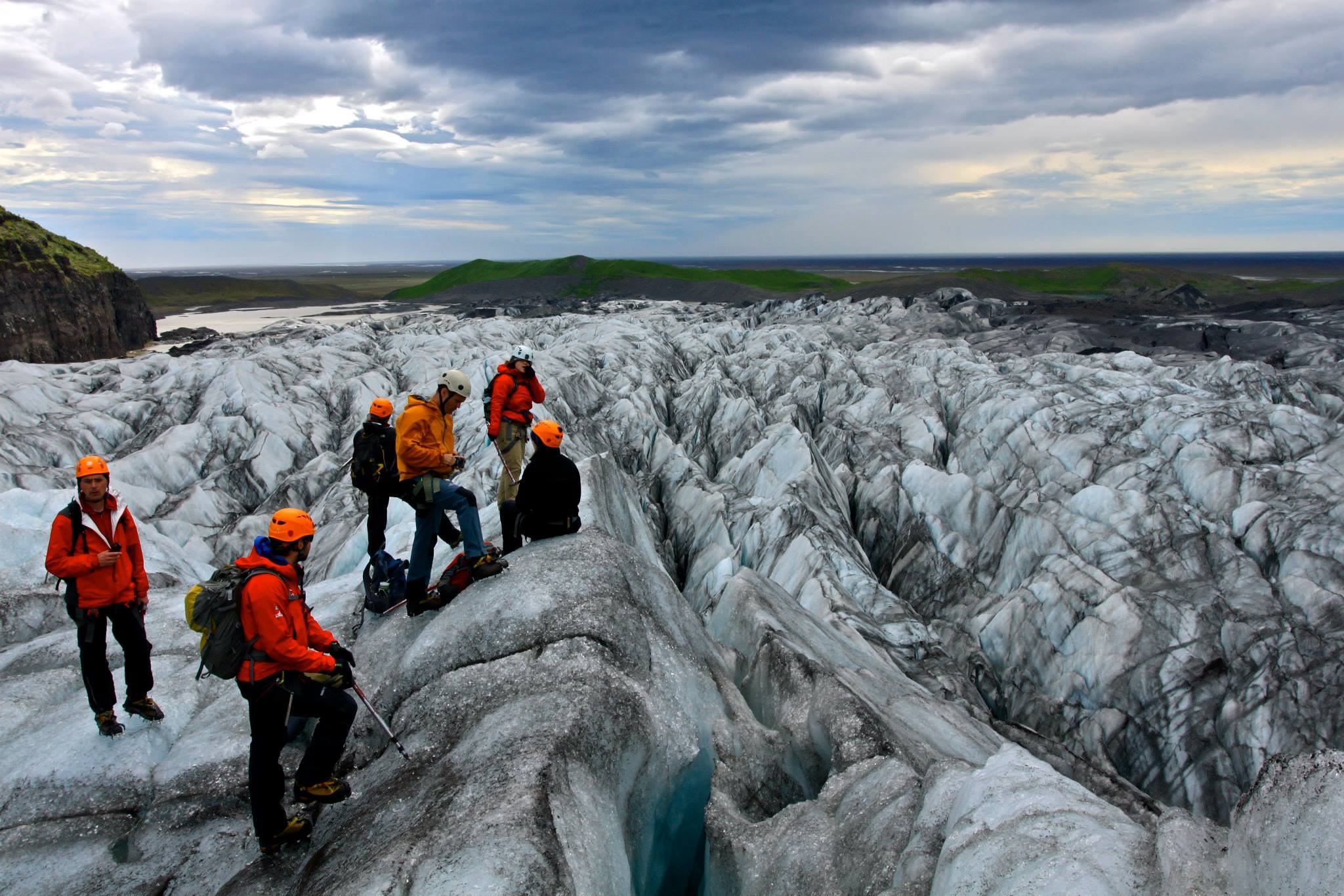 Day 5: After learning to walk in crampons, students set out for a full-day glacier hike. “The scenery was like nothing I have ever seen before,” says Heather Crosby, C’16. “Glaciers are fluid masses, constantly moving, breathing in and out. It was a lot more hilly than I expected, and these hills are formed by the movement of the glacier.” Photo by William Phelps. 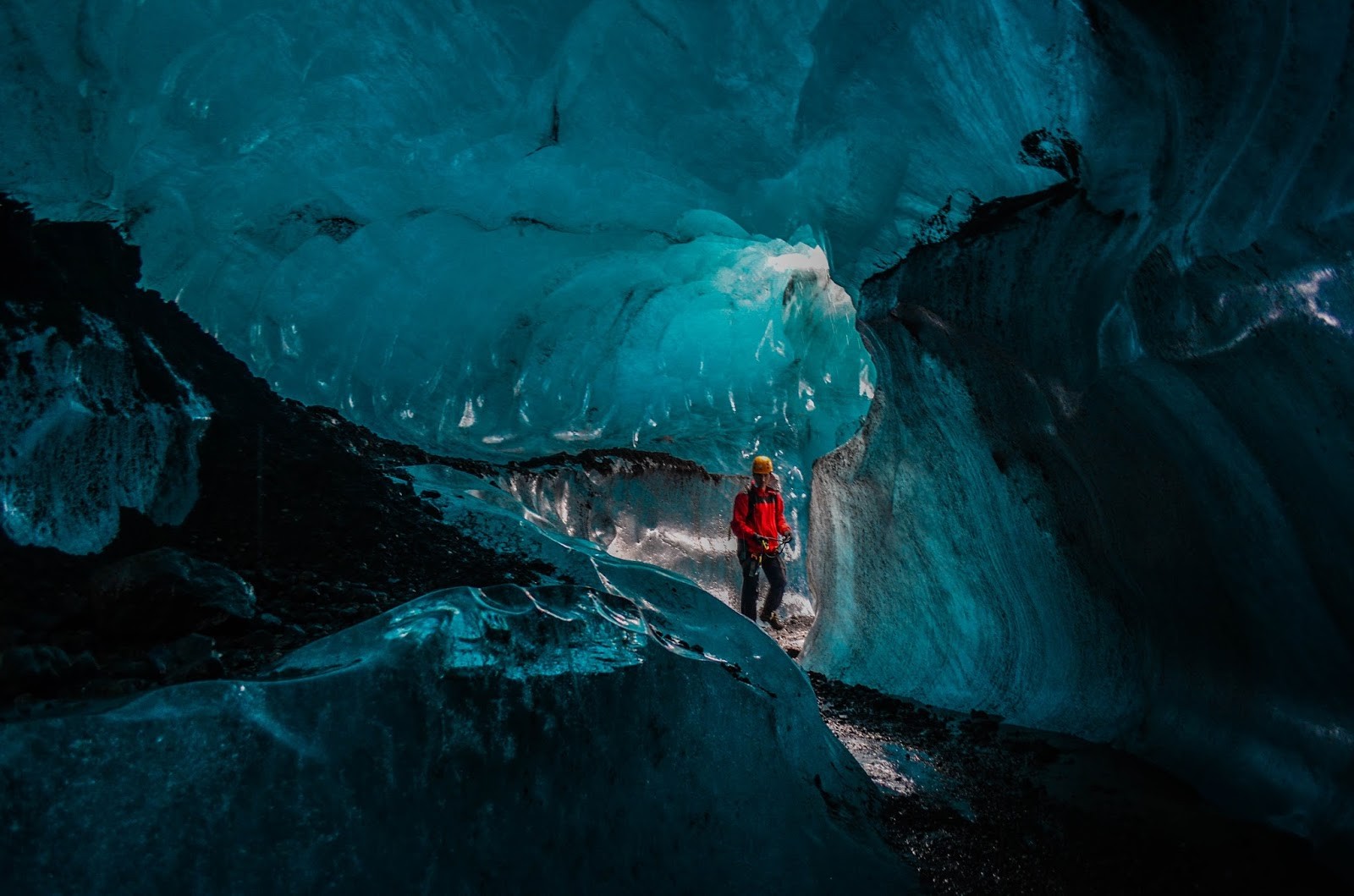 Day 5: “At one point on the glacier hike, we got to clip into a rope and work our way into an ice cave that had been formed by flowing water,” says William Phelps. “The ice is especially blue because the pressure pushes out all of the oxygen.” Photo by Emmie Oliver. 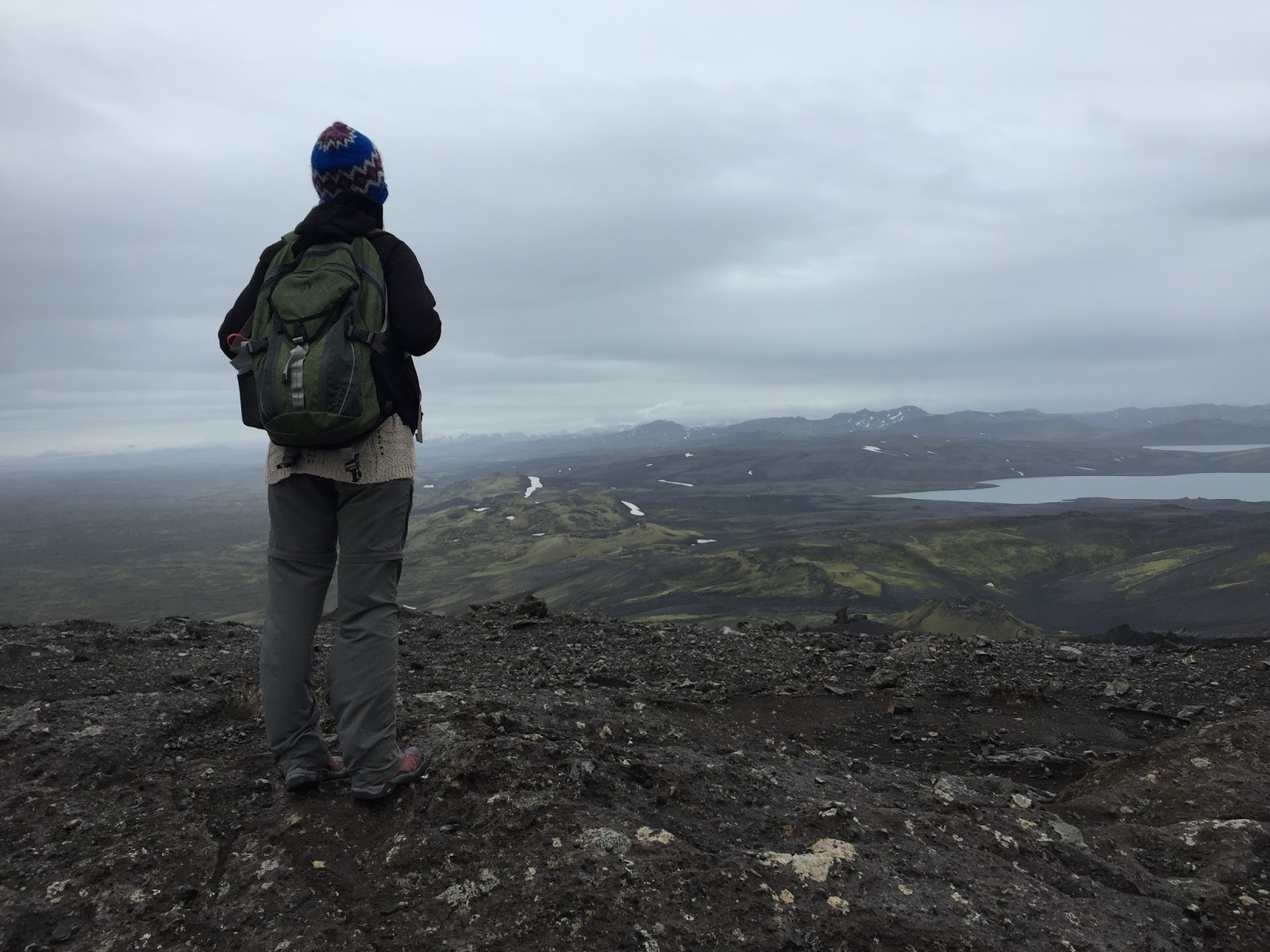 Day 6: “The hike to the top of Lakagígar volcano was strenuous in cold, windy, rainy weather,” says Lorna Harkey, C’16. “At the top, we learned about the volcano’s massive eruption in 1783 and 1784. The cloud of ash from the eruption drifted to North America and Europe and may have affected the climate of the entire planet.” Photo by Lorna Harkey. 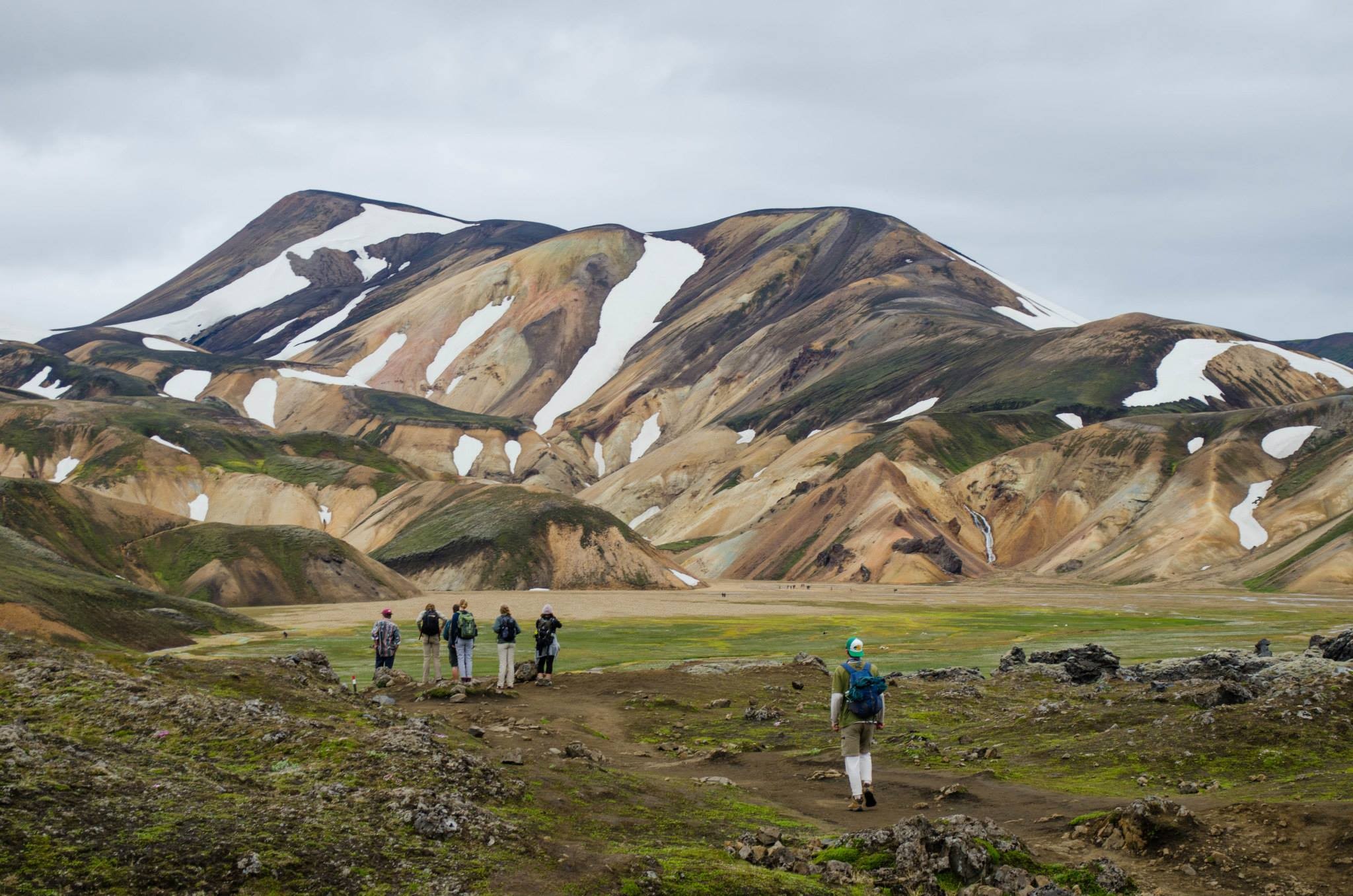 Day 7: “The valley of Landmannalaugar is surrounded by colorful hills formed by rhyolite,” says Catherine Campbell, C’18. “This relatively rare volcanic rock has a higher viscosity than obsidian and basalt and is a reddish orange that stands out among the darker volcanic substances.” Photo by Emmie Oliver. 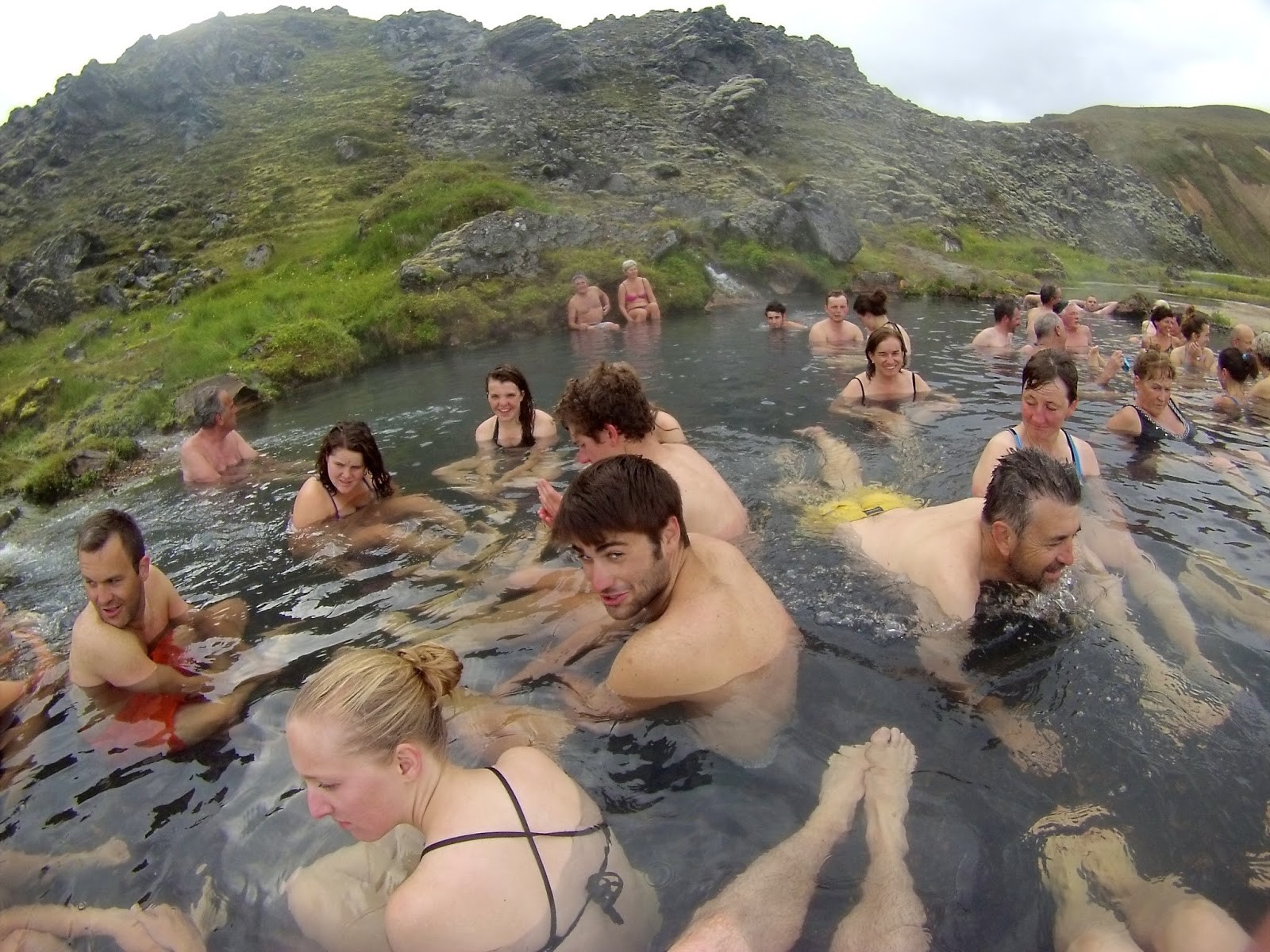 Day 7: “After a long hike at Landmannalaugar, we were able to relax our muscles and rejuvenate in the geothermal hot spring at the trailhead,” says William Phelps. “It was cool to be in our bathing suits in very warm water while staring at snow-covered hills.” Photo by William Phelps. 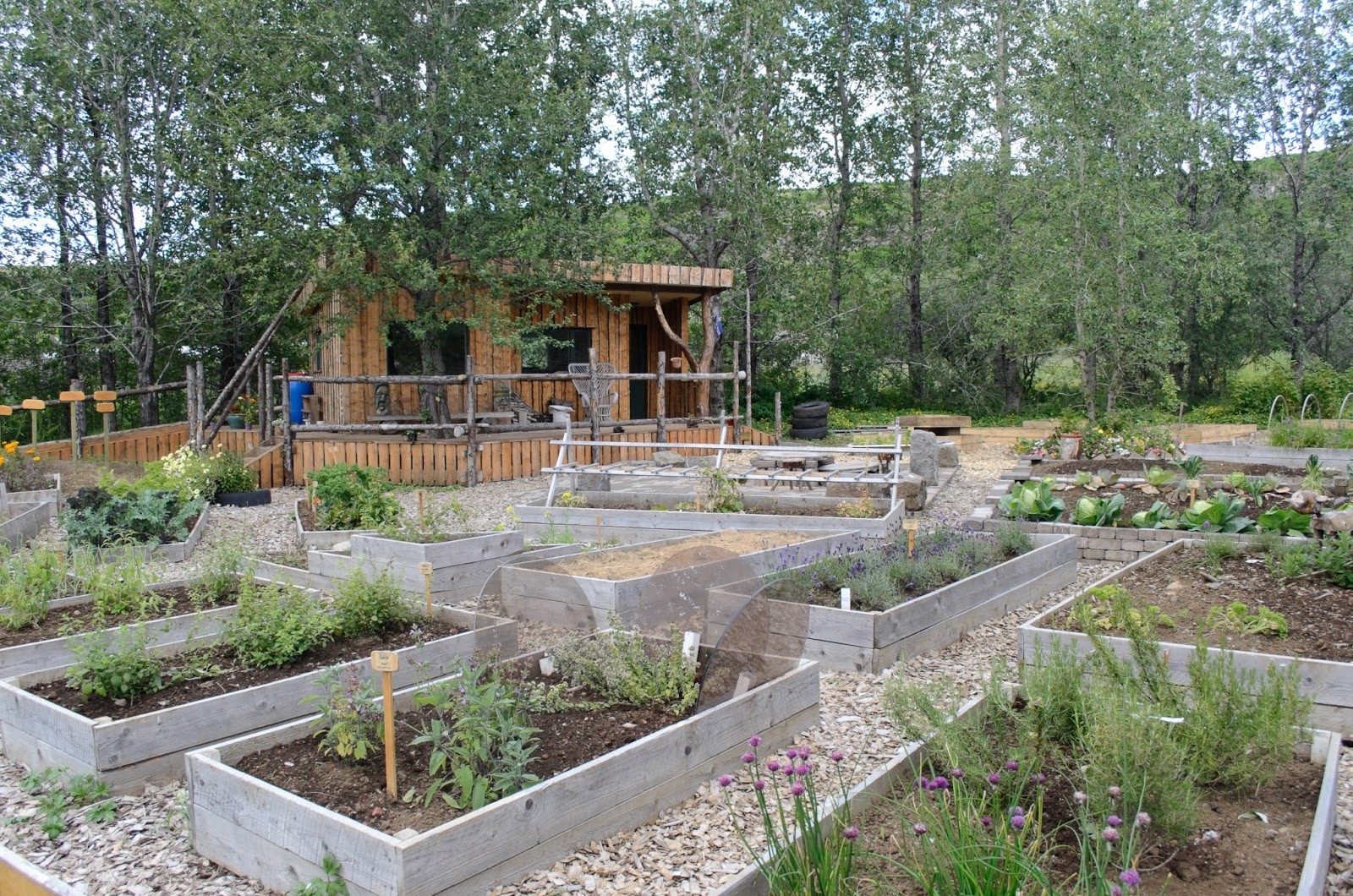 Day 8: “We visited Solheimar, an eco-village and sustainable living community where 100 people practice environmentally and socially conscious lifestyles, producing as much of their own food and basic goods as they can.” says Emmie Oliver. “The community was founded in 1930 by Sesselja Hreindís Sigmundsdóttir, an Icelandic woman with a passion for not only the environment but also taking care of orphaned and disabled children. Today, the community continues her legacy, serving as a place for physically and mentally disabled Icelanders to live and work.” Photo by Emmie Oliver. 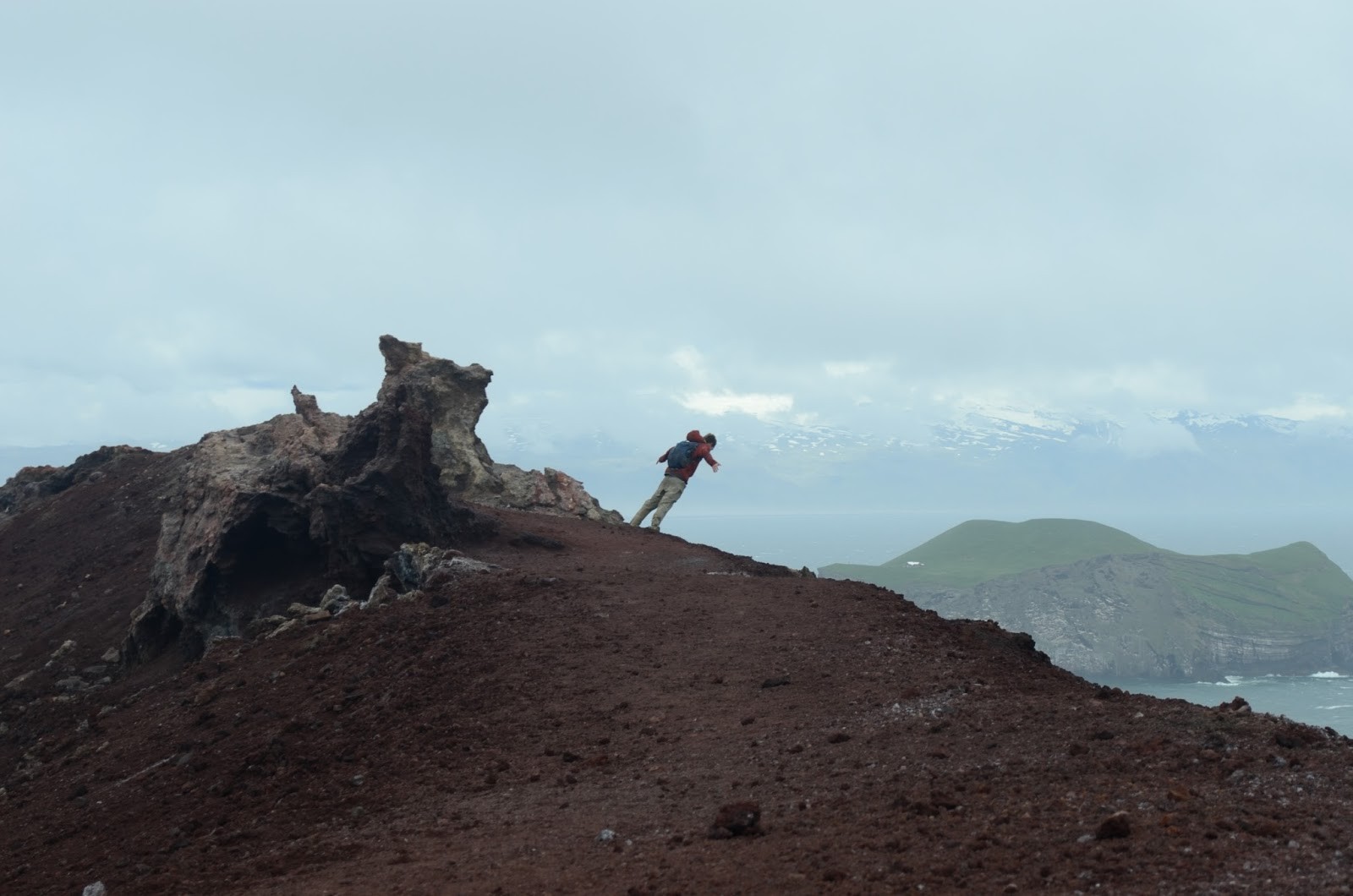 Day 9: William Phelps leans into a strong wind atop Eldfell volcano on the island of Heimaey in the Westman Islands. The volcano erupted in 1973, threatening the entire island. “The lava flow buried everything in its path,” says Eva Faison. “Some citizens quickly evacuated, while others stayed behind to devise a plan to ensure their town’s safety. They were able to pump frigid water from the Atlantic onto the lava flow, effectively diverting it and saving the harbor.” Photo by Emmie Oliver. 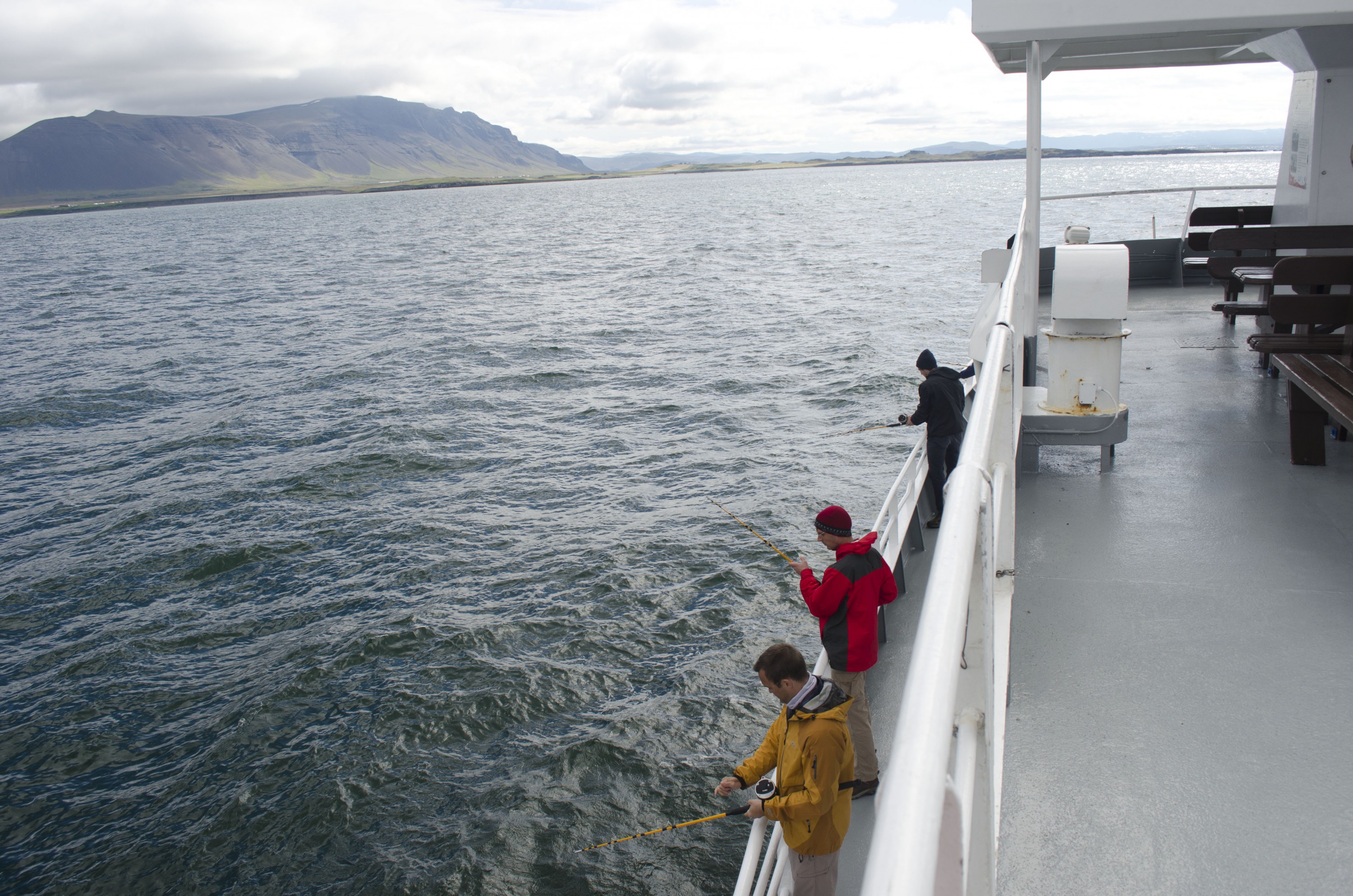 Day 10: Fishing is the backbone of Iceland’s economy, so on their last day in the country, students took a guided fishing trip in Faxafloi Bay. “We caught five cod and one mackerel and had a real sea-to-table meal,” says Baird Newbern. “As soon as the fish left the hook, it was filleted, spiced and thrown on the on-board grill. It was the best fish that most of us had ever tasted.” Photo by Emmie Oliver.