The University of the South celebrated Foundation Day on a warm and sunny Friday, Sept. 20.

The University of the South celebrated Foundation Day on a warm and sunny Friday, Sept. 20. The convocation coincided with Family Weekend and included the induction of 289 new members into the Order of the Gown as well as the conferral of three honorary degrees. Dr. Sylvia Earle, arguably the world’s best-known oceanographer, delivered the Foundation Day address.

John L. Ford served for 12 years as senior vice president and dean of campus life at Emory University. Previously, he was the Robert W. and Elizabeth C. Staley dean of students and a professor of policy analysis and management at Cornell University. Later in his career, Ford co-led Emory’s Journeys of Reconciliation with students, faculty, and staff to explore how historic racial, religious, and ethnic conflicts in other countries continue to challenge community-building and the search for social justice. He received an honorary doctor of humane letters.

The Rt. Rev. Dr. F. Clayton Matthews was called in 1998 to become the bishop for the Office of Pastoral Development, a ministry of the presiding bishop’s office. He remained in that post under three presiding bishops until his retirement in 2017. Matthews continues to serve as the managing director of the College of Bishops, an authorized school for education and formation of bishops of the Episcopal Church, the Anglican Church of Canada, Wales, Scotland, Tanzania, Mexico, Guatemala, Australia, Cuba, and others. He received an honorary doctor of canon law.

Oceanographer Sylvia A. Earle is explorer-in-residence at the National Geographic Society, and a former (and first woman) chief scientist of NOAA. She first used scuba gear as a teenager, and has since led more than 100 expeditions and spent 7,500 hours underwater. Earle founded Mission Blue/Sylvia Earle Alliance, a foundation that works to establish Hope Spots, protected places in the ocean where exploitation is prohibited, around the world. She received an honorary doctor of science. 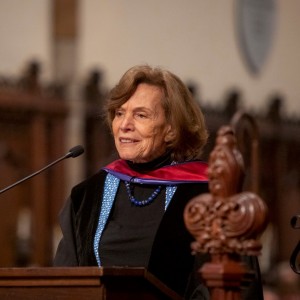 In her address, Earle asked the audience to envision the distant past and imagine how much the world has changed in the exactly 500 years since Magellan set sail to circumnavigate the globe. Bringing it closer to the present day, she called the last 50 years the most extraordinary time in history, when more has been learned than ever before about “the nature of nature,” who we are and where we are going.

Earle told the students that human actions in the next 10 years will shape the future of the planet, and reminded them of the edge they have over past generations: we now know the effects of the actions we take. Every person has power, and every action has an impact. “Knowledge is a superpower,” said Earle. “You can look back in 10 years and remember the moment when you determined to make a change.”

Following Earle’s address, Nellie Fagan, president of the Order of the Gown, announced the names of 289 new members as each stood to be recognized before being admitted to the Order by Vice-Chancellor McCardell. McCardell first gave a brief history of Foundation Day, which celebrates the matriculation in 1868 of the first nine Sewanee students. And he noted that 50 years ago, the first class including women began at the University. This academic year will celebrate those 50 years of coeducation at Sewanee.

McCardell reminded the new members of the privileges and responsibilities of the Order of the Gown, then said “Please accept your gowns,” beginning a happy commotion of gowning and applause. The family members in attendance celebrated the students’ achievement before singing the alma mater.

The Convocation concluded with the sound of the carillon ringing over the students, families, and faculty who spilled into the Quad for a picnic. See photos from the afternoon.