Sustainability program’s spring highlights: “While this has not been the spring any of us envisioned..."

Amy Turner, director of Sewanee’s Office of Environmental Stewardship and Sustainability, gives the following update about some of the program’s spring activities. “While this has not been the spring any of us envisioned and at times it has been overwhelming, what I will remember most is taking time to laugh with my team and helping each other. They are part of what makes this such a special place to work,” said Turner.

Marking trails is a blend of science and art. Armed with guidelines that included instructions for how many paces before and after a curve a trail marker should be placed and formulae for determining maximum and minimum distances between markers, Michele and Joe Dombrowski took a walk on Sewanee’s Perimeter Trail. In just two weeks this spring, the Dombrowskis installed more than 2,000 reflective aluminum blazes as replacements for the painted trail markers.

How did the head women’s lacrosse coach and the Sewanee athletics equipment manager come to be clearing and blazing trails? Because of COVID-19, of course. After students moved to remote learning in March, some University employees were unable to perform their usual work duties—such as coaching student athletes—and volunteered for redeployment to help colleagues in other areas. Though recruiting and other tasks are important to Michele Dombrowski’s position, she was acutely missing the two hours daily spent outside on an athletic field. The chance to be outdoors on the trails instead was an opportunity she couldn’t pass up. 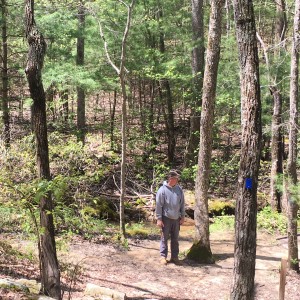 The Dombrowskis were eager to pitch in on Domain maintenance efforts and each brought unique skills and perspective to the trail blazing project. “Joe is heavily involved in cross country running and knows the Perimeter Trail really well. And having a very mathematical mind, he took to the science and measurements of the trailblazing guidelines,” said Domain Manager Nate Wilson. “Michele, however, admits to occasionally getting turned around in the woods. She did a great job of saying, ‘You know, if I were in the woods, this is what I’d look for.’’ Together, the Dombrowskis injected human perspective and intuition into the math of the guidelines to excellent effect.

“Sewanee’s trails bring joy to our students, community, and visitors alike,” said John Benson, director of the Sewanee Outing Program. “You can clearly tell that someone who loves the trails put up the new trail blazes. There are just enough for the trail to be clear without distracting from the beauty of being in the woods.”

Just as the salad crop was peaking at the University Farm, the Tennessee governor’s stay-at-home order took effect. In a typical spring, students pack 90% of the Farm’s produce for use by McClurg Dining Hall and Stirling’s coffee house on campus. Without the students on campus or the need for much produce at McClurg, the Farm staff responded quickly and creatively by changing the salad packaging to retail-sized bags and sending the greens to a local online farmers market and local food banks. Farm staff worked long hours each day harvesting, packing, and preparing for the next week. 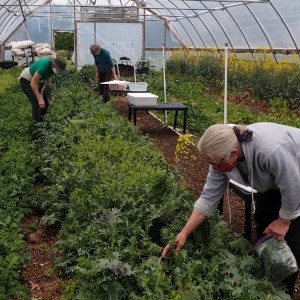 Near the end of the salad greens season, the stay-at-home order was lifted. Members of Friends of the Farm arrived in masks and gloves to help glean lettuce, spinach, and kale for a food bank in nearby Monteagle. After much picking and even more handwashing, more than 200 gallons of fresh greens were delivered to the food bank for the enjoyment of our neighbors.

This summer the University Farm will work with Sewanee Dining to deliver meals to area children. The University has participated in the program, sponsored by the USDA, for several years. It is focused on providing summer nutrition to children who normally receive subsidized school lunches. The Farm’s summer crops of corn, beans, squashes, and tomatoes will be incorporated into the meals as well as provided to local food banks.