Sewanee Dining began using reusable to-go containers at the end of August when students couldn’t all be seated in McClurg. The boxes are “checked out” and returned, and over a six-week period kept almost 34,000 single-use containers out of the landfill.

In late August, Sewanee Dining began using reusable to-go containers when students couldn’t all be seated in McClurg Dining Hall due to COVID-19 protocols. Many students chose to enjoy their meals outdoors or in a different campus location. Heavy-duty barcodes (needed to survive McClurg’s industrial dishwashers) are attached to the green boxes. Staff from duPont Library and academic technology assisted Sewanee Dining staff with using the same tracking system used by the library.

The boxes are “checked out” to specific students using the barcodes for tracking. The green boxes must be returned to McClurg or Cravens Hall within two days to avoid a fine. The boxes then are washed and reused for another take-out meal. 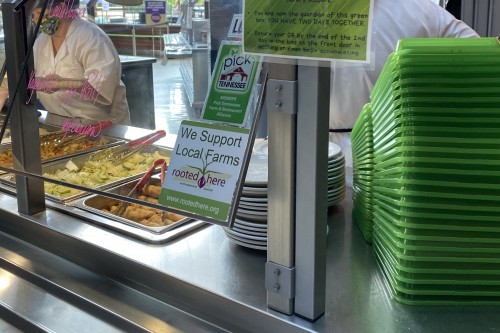 The program was phased in over several weeks and was adopted enthusiastically by students. By mid-October, only green boxes were available for all take-out meals. Over the following six weeks, the program kept almost 34,000 single-use containers out of the landfill.

Chef Caroline Thompson, manager of Sewanee’s Food Literacy Program, said, “At the beginning of the semester, we were going through about 7,500 single-use containers a week.” Now Sewanee Dining only keeps enough on hand for an emergency, such as a broken dishwasher.

“The student reception has been overwhelmingly good,” Thompson continued. “They are very interested in sustainability issues. We're grateful for the students’ flexibility during the learning curve at the beginning. The program has been a huge win—we're able to feed the students well and promptly during the pandemic, we're not contributing as much to the landfill, and there is a lower risk of trash around campus.”

Sewanee Dining looks forward to finding ways to go even greener in the spring.