Klug has been enrolled in SEA Semester: Sustainability in Polynesian Island Cultures and Ecosystems, a program designed to explore the complex environmental challenges faced by remote Pacific islanders, and to explore sustainable solutions for island cultures and ocean ecosystems. The 15 students on board focused on how human societies must adapt and evolve, given limited resources, growing populations, exponential increases in waste generation, and climatic disruption.

They sailed to several Pacific island countries, including Tonga and Fiji, for a comparative perspective. Along the way, they examined the complex connections between human communities, political structures, and the environment. A highlight was visiting the island of Hunga Tonga Hunga Ha'apai (HTHH), created when two existing islands, thought to have originated in prehistoric times, were connected by new land created in 2015 by a volcanic eruption. The voyage ended with an additional week back on shore, where the students compiled their research and presented their findings.

Update Feb. 4, 2019: The SEA semester students joined NASA scientists on HTHH; those scientists now have written about the island. See the CNN story here. The chief scientist from the Seamans blogged about the joint work, too. 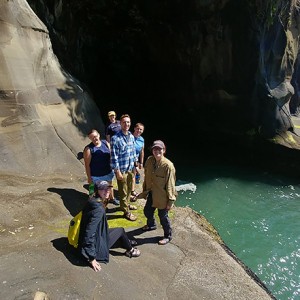 Fox is enrolled in SEA Semester: The Global Ocean, exploring firsthand the unique environmental and complex cultural influences that have shaped the islands of New Zealand, in order to better understand human impacts on the environment. As an island nation, the health of New Zealand’s ocean, land, and people are inextricably connected; policies and conservation efforts at times compete with economic goals.

Fox and her fellow students will attempt to understand how centuries of seaborne commerce, fishing, and land development have influenced the natural environment of the coastal zones and offshore waters. They will compare their observations to those found in a 19th-century whaling ship’s logbook and chart, which they studied and transcribed earlier in the semester.

Both students began the semester with four to six weeks of preparatory coursework on shore at SEA Semester’s campus in the oceanographic research community of Woods Hole, Massachusetts. The ship then served as their home, classroom, and laboratory during their respective six-week voyages. On board, students become full working members of the ship’s crew, sharing responsibilities for standing watch, processing oceanographic samples, navigating by the stars, and participating in round-the-clock operations under the guidance of professional mariners and oceanographers.

Remember that if new students meet Sewanee’s academic and social expectations, the Sewanee Pledge guarantees funding for a summer internship or research opportunity, a semester-long study-abroad opportunity at no additional tuition cost, and the ability to graduate with one major in four years.