A brief gathering was held June 16 in All Saints’ Chapel to observe the “Leave-Taking” of Sewanee’s 16th vice-chancellor, following a morning of recognitions by the Board of Regents.

A brief gathering was held June 16 in All Saints’ Chapel to observe the “Leave-Taking” of Sewanee’s 16th vice-chancellor. Due to restrictions on public gatherings necessitated by the COVID-19 pandemic, attendance was limited to invited guests only; the service was livestreamed and recorded for the community.

On his last day in the office of vice-chancellor, John McCardell donned the red ermine cape one final time for the service, which included his farewell remarks, short prayers, and a hymn. The service also recognized the Rt. Rev. J. Neil Alexander, vice president and dean of the School of Theology, and the Very Rev. Thomas E. Macfie Jr., University chaplain and dean of All Saints’ Chapel, who are stepping down from those roles. 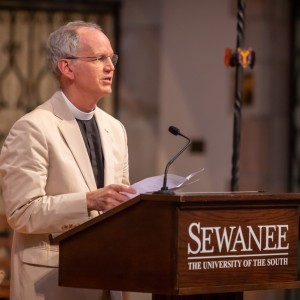 Macfie offered his final sermon as part of an online service on June 14. Both McCardell and Alexander will return to teach at the University.

The new dean of the School of Theology, the Rev. Canon Dr. James Turrell, and the new University chaplain, the Rev. Peter Gray, were introduced, along with Vice-Chancellor-Elect Reuben Brigety. 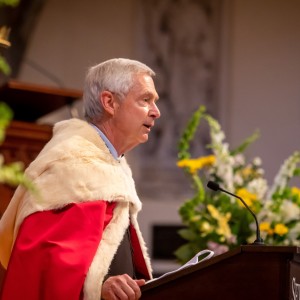 In his address (read it here), McCardell reflected on his 10 years of service, and then announced a gift and an initiative to help the University “write a new narrative” looking forward. He has established a fund of $50,000 to be administered by the University Chaplain. The only condition on the fund’s use is that whatever program is planned, whoever attends must bring “someone who is not like them.” McCardell said of the gift’s purpose:

“We can try, nobly, to change the world. But remember the old song—‘Let there be peace on earth’—and the next line, the one that matters, ‘and let it begin with me.’ Not with somebody else. With me. This is called personal responsibility. And each of us has it. … All that’s required is an outstretched hand. Inconspicuous, but genuine, human solidarity.” 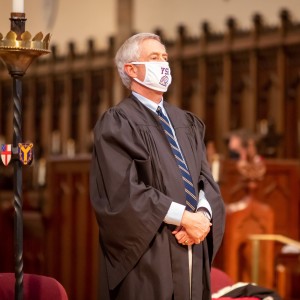 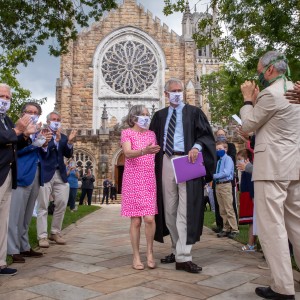 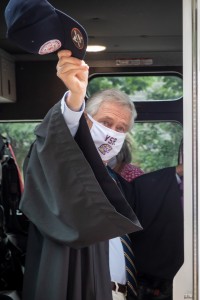 At the end of the service, McCardell removed the ermine to don the black teaching gown. He and his wife, Bonnie, emerged from the Chapel to be surprised by a group of masked well-wishers before they were given Sewanee Volunteer Fire Department caps and whisked down University Avenue in a fire engine.

During a meeting of the Board or Regents earlier in the day, resolutions of appreciation were presented to Bonnie McCardell, Neil Alexander, and Tom Macfie. A special resolution bestowed the title Vice-Chancellor Emeritus on John McCardell, noting especially the difficulties of leading the University during the COVID-19 pandemic and saying in part, “[the Board] does hereby convey its highest admiration to John M. McCardell Jr., for his devotion to and sacrifice for the University at one of its most vulnerable times, in such a manner that in times to come, as Virgil has said, ‘Forsan Et Haec Olim Meminisse Iuvabit’—‘Perhaps at some point in the future it will be pleasing to recall these things.’”

The Sewanee Inn’s Founders Hall has been renamed McCardell Hall in honor of John and Bonnie McCardell and to recognize their unfailing and gracious hospitality to others. 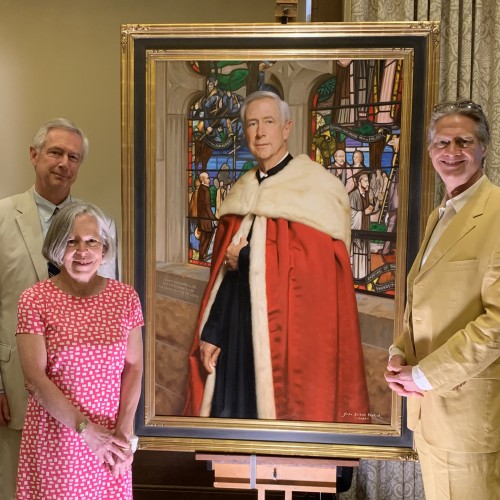 Also during the Regents meeting, the official portrait of the vice-chancellor was unveiled. As is a Sewanee tradition, the portrait by John Seibels Walker, C'83, portrays McCardell wearing the red cloak with ermine trim. In a nod to McCardell the historian, the portrait is set in the vestibule of All Saints’ Chapel in front of the window depicting the University’s second founding.