Vice-Chancellor Reuben Brigety has announced that Deborah Vaughn has been named vice president for University Relations. She comes to Sewanee from Augusta University, a research university and academic medical center.

Vice-Chancellor Reuben Brigety has announced that Deborah Vaughn has accepted the position of vice president for University Relations. Vaughn succeeds Jay Fisher, C’79, who is stepping down after 11 years in that position to take on the role of special assistant to the vice-chancellor. 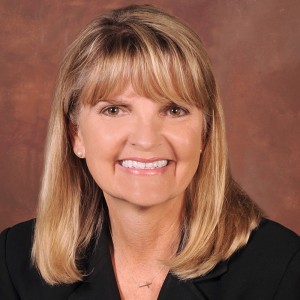 Debbie Vaughn, who will begin her new role on October 1, brings to Sewanee a wealth of university development and alumni relations experience. She is currently serving as vice president for philanthropy and alumni engagement at Augusta University, a research university and academic medical center formed by the consolidation of the Medical College of Georgia and then-Augusta State University. During her tenure there, she successfully led the university to reach record levels of giving, donor engagement, and alumni participation and positioned the university for campaign readiness.

“Debbie joins the University at an auspicious time,” said Brigety. “Her experience and talents will help the University Relations team, and the entire campus, prepare for and support the new initiatives that are critical to Sewanee’s successful future. She has a head start: Debbie is already familiar with Sewanee—her daughter, Abbie, is a member of the Class of 2020.”

Prior to joining Augusta, Vaughn served as associate vice president for development at the University of Alabama and as senior executive director of development and chief development officer at the University of Mississippi. In these positions, she fostered collaborative partnerships with deans and faculty members to encourage proposals to enhance those universities’ academic environments, with a keen focus on endowed scholarships, faculty support, and other programmatic support.

“I am thrilled to work alongside a dynamic and successful University Relations team in sharing the Sewanee story. Sewanee is such an extraordinary place with loyal and dedicated alumni and parents, all of whom share a strong commitment to excellence,” said Vaughn. “My family and I have been blessed to experience the very best of Sewanee’s warm and welcoming community over the last few years, and we are thrilled to now live and work in this special place.”