Brigety engaged in an in-depth conversation with Kanuga President the Rev. Michael Sullivan, T'00, a former Regent of the University.

The hour-long conversation covered current topics including racism and injustice now and throughout American history; how a definition of being Southern could include both Merle Haggard and Muddy Waters; the obligation of people of faith to not be silent, but to act; and the possibility of Sewanee as “a place that is welcoming and affirming to the broad panoply of Southerners who want access to a world-class education in the spirit of Ecce Quam Bonum that is the lodestar of what we do.” 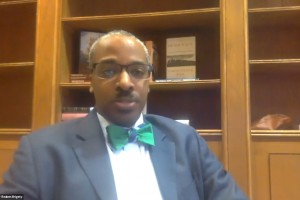 Established in 1928 and affiliated with the Episcopal Church, Kanuga is a non-profit conference, retreat and camp center in North Carolina serving 35,000 guests annually.