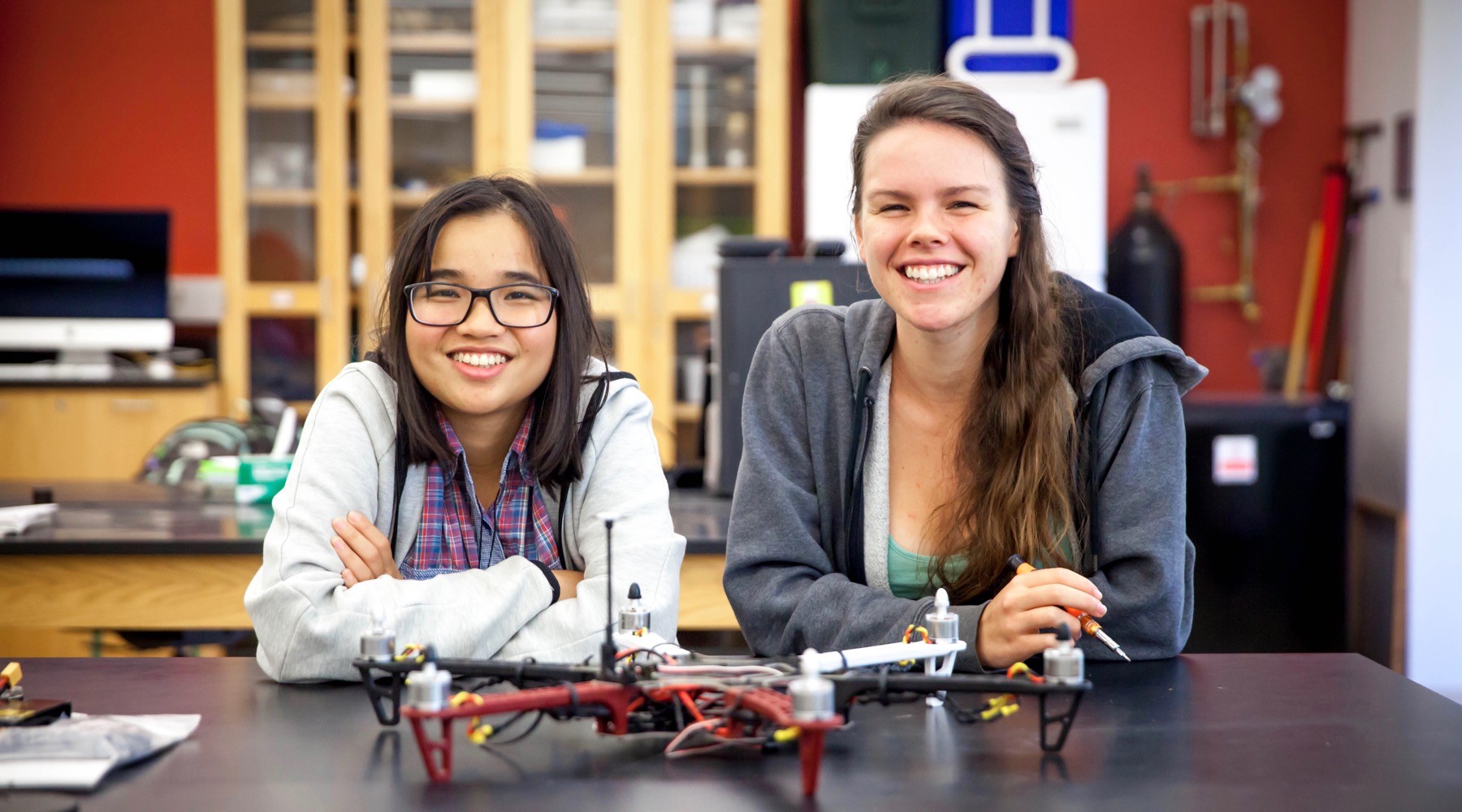 Lam Ngo, left, and Tieta Keetle with the Kashmir World Foundation drone they are building with the help of Aliyah Pandolfi. Photo by Buck Butler

The Princess and the Drone

A student’s chance meeting with a Kashmiri royal leads to a Sewanee drone research program that’s ready to take off and fly.

Lam Ngo, C’20, and Tieta Keetle, C’18, stand over a table in a science lab in Spencer Hall, poring over a menagerie of metal and plastic pieces and parts that, when put together, will make a working research drone.

They’re about halfway finished building the device, but they’ve hit a snag. It’s the flight controller. The mounts are all wrong, and they need to be sent back to the drone expert who’s been walking them through the construction process for troubleshooting.

It just so happens that the drone expert in this case is Aliyah Pandolfi, the princess of Kashmir, a royal by birth and a wildlife conservationist by vocation. Pandolfi is the founder and executive director of the Kashmir World Foundation, an international nonprofit organization that uses art, science, and technology to address human and wildlife issues around the world. The foundation’s robotics division has pioneered innovative techniques that employ drones to monitor wildlife movement and to fight poaching. And it’s one of the foundation’s drones that now sits, half-built, on the table in front of Ngo and Keetle.

A chance meeting between Ngo and the princess over the summer launched the Sewanee drone project, an undertaking with potential for research by students and professors in a wide variety of disciplines. And that potential continues to grow as more faculty members begin to explore the possible projects the drone could facilitate.

Ngo, a sophomore biology and computer science double major, participated in the University’s Island Ecology Program over the summer. Now in its 31st year, the program offers an opportunity for 10 students to study on St. Catherines Island, an undeveloped barrier island off the coast of Georgia. Ngo was in a research building on the island when Pandolfi came in to use a copier, and the two struck up a conversation about using technology for research, about drone construction and customization.

After hearing about the work Pandolfi was doing on the island—using drones to monitor sea turtle movement—Ngo knew she wanted to tag along. And Pandolfi couldn’t pass up an opportunity to share the work she loves.

“We weren’t actually there for work that weekend,” Pandolfi says. “We were there for more of a personal trip, but of course I love what I do, and I couldn’t stay away. I look at the conservation world as a way of finding solutions, which brings the next generation, people like Lam, on board, making them interested in our environment and wildlife. I saw her passion and drive the first time I met her. It’s like magic, working with people who are also passionate about what they do.”

After meeting Ngo, Pandolfi had to return home, so she asked Ngo to fly her drones on the island after she left. A partnership was born.

It’s a partnership that has grown beyond the shores of St. Catherines, eventually leading to Pandolfi sending an unconstructed, customizable drone to Ngo and Keetle to build and then to use on a variety of Sewanee research projects. The idea behind having the students put the drone together themselves is that they’ll be better prepared to troubleshoot any problems that might arise.

Pandolfi explains that the controller mounts the students are currently struggling with will have to be replaced by 3D-printed versions to allow for easier maneuvering. Once she ships the mounts to Ngo and Keetle, the two will continue working with her to program the drone to fly around the Domain. For their first project, they’ll send it high above the tree canopy, collecting data with the drone’s onboard computer and taking aerial photos for a study of leaves changing colors and dropping to the ground.

But that will just be the beginning of drone work on the Domain.

According to Ken Smith, professor of forestry and assistant dean for the environment, other professors from several departments are dreaming up ways to use the drone for projects of their own. Lucia Dale in the Computer Science Department, along with Chris Van de Ven in the Earth and Environmental Systems Department, are on board to assist with flying and correcting mapping issues with the drone.

One of the upcoming projects will be overseen by Assistant Professor of Biology Kristen Cecala, whose goal is to fly the bluff line on the Domain to try to spot any freshwater seeps and streams where a rare species of salamander may be living. And Associate Professor of Biology Brandon Moore, an alligator expert, is interested in a partnership with Pandolfi in Cuba to investigate Cuban crocodiles.

Pandolfi says the purpose of the Kashmir World Foundation’s drone work is to create an affordable tool that its users can build, customize, and troubleshoot themselves.

And that is exactly what she is helping Ngo and Keetle do, according to Smith. “Aliyah is in constant communication with the students,” he says. “She’s helping them get the drone built and helping them understand the basics. I talk to her just once in a while over the general direction of the program and about what other projects we could possibility develop.”

Ngo, who has high hopes for the partnership with Pandolfi and the University, says she imagines her classmates’ interest in drones will rise once the full breadth of the projects is revealed. She hopes that students from a range of disciplines will begin dreaming up plans to work with the drones.

Keetle agrees. “I hope Aliyah and Sewanee can have a sustainable relationship and that she can keep working with both professors and students here,” she says. “She seems to have a lot of resources that we can benefit from, and she doesn’t come from a technology-heavy background, so she’s a perfect example of how you can come from other backgrounds and learn how to connect disciplines through technology.”

Ngo and Keetle say once they get the modified flight controller back from Pandolfi, they will likely be able to finish the drone in a week and a half and then start learning the software. That’s when things will really start to take off.