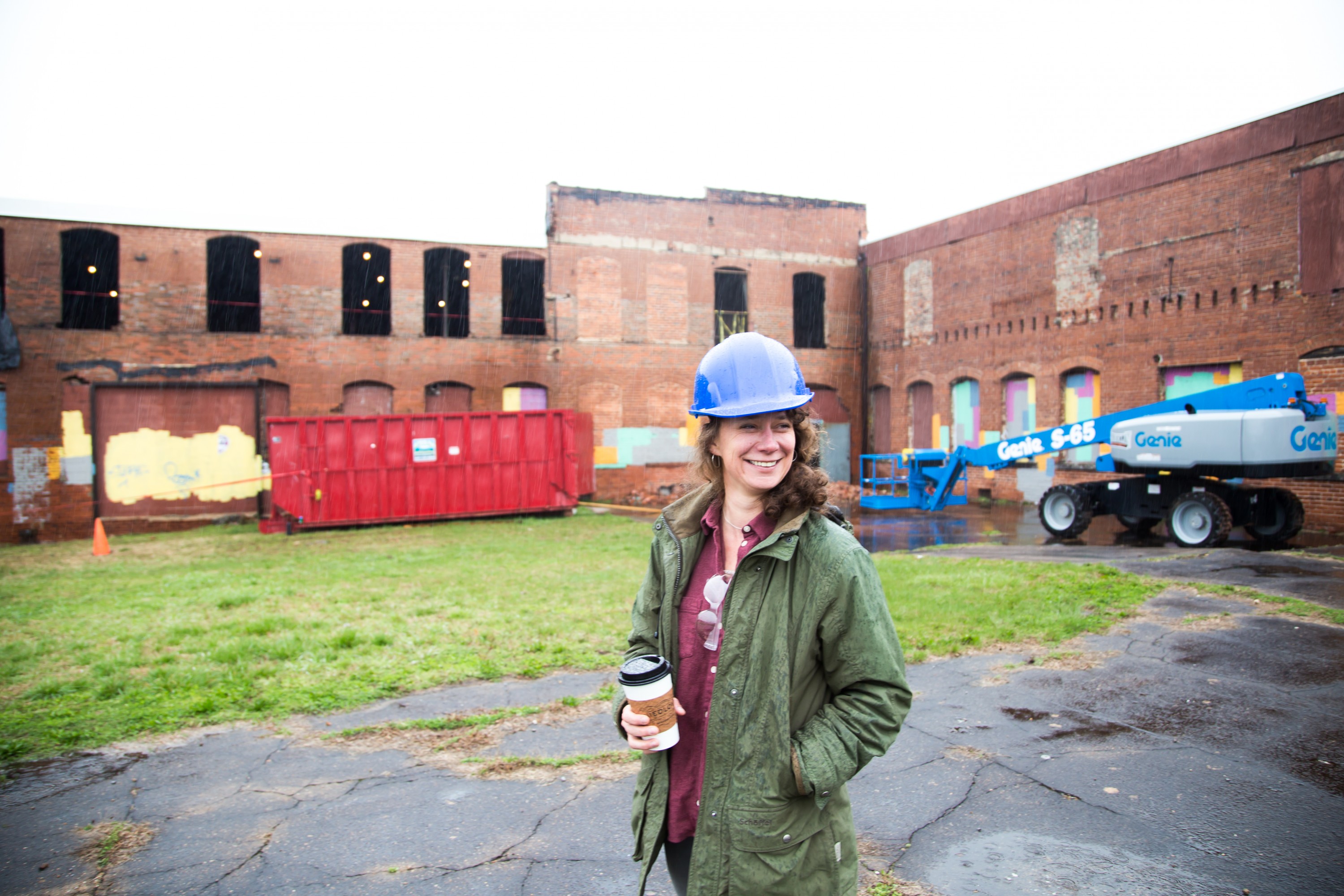 Charlotte Caldwell, C'05, at the future home of Stove Works, which is also the former home of the stove factory founded by her great-great-grandfather.
Photo by Allison Kendrick, C'10.

How To Build an Art Factory

In Chattanooga, Charlotte Caldwell, C’05, looks to transform the contemporary-art scene in the Southeast with an ambitious dream and a 75,000-square-foot remnant of the family business.

At the corner of Holtzclaw Avenue and East 14th Street in Chattanooga, an unassuming—yet expansive—series of brick buildings blends seamlessly into the city’s industrial backdrop. Locals know it as the site of an old casket and coffin company from the early 1900s or an iron stove company from the 1950s. To Charlotte Caldwell, C’05, those brick buildings represent a new cultural touchstone for the Southeast—an ambitious effort to provide the most comprehensive hub and home for contemporary art in the region.

Stove Works, a creative and collaborative space, will attempt to push the boundaries of art and the assumptions surrounding it. Though the venture will be new for the area, Caldwell is not new to the art scene or the city. In fact, her roots in this project run deep. The Tennessee Stove Works factory was founded by her great-great-grandfather, and with the name still intact, Caldwell intends to carry on the legacy of manufacturing. But this time, the product will be art.

“This concept of the cast iron oven resonates deeply with me and the project,” Caldwell says. “This idea of heat and production just fits.”

Caldwell started her journey at Sewanee with plans to be an anthropology major, but as she took more and more art classes, she made the switch to studio art.

“Sewanee allowed me to be an artist. It was the first time I could throw myself into just making,” Caldwell says. “There are parameters and the technical parts you need to realize, of course, but the rest is up to you. I want Stove Works to be like that, too.”

Sewanee Art Professor Greg Pond was among Caldwell’s most influential mentors. From imparting a passion for self-expression to being among the first to know about Caldwell’s purchase of a 75,000-square-foot space, Pond has been part of the process from the very beginning.

“Charlotte is incredibly dedicated to doing this in her hometown and to serving the cause of advancing art in the region for the benefit of the entire community,” Pond says. “Stove Works is already having a positive impact on the local community, bringing exhibitions to Chattanooga of a sort that previously had no dedicated venue for them in the city. The exhibitions are elevating the level of discourse around contemporary art.”

Caldwell moved to Nashville after graduating from Sewanee to work in a studio, but her trajectory completely shifted. Moving away from in-studio work, she started gathering friends, curating work, and hosting shows. Art organization and facilitation soon became her main focus.

“It was at this point in Nashville when I decided not to be an artist,” Caldwell admits. “I was better at not finishing work than anything else—except for these shows—they were the most rewarding experience. Seeing others succeed in their practice, to see them have the time and space to grow—that is fulfilling to me.”

It was this realization that set her future course. Caldwell was not only facilitating art shows out of joy, she was facilitating them in response to a need in the art community. Before circling back to Chattanooga, though, Caldwell spent some time in New York earning a master’s degree in arts administration from New York University and working for an arts nonprofit that would set the framework for her dreams back home.

While working at the Wassaic Project in Wassaic, New York, Caldwell began developing ways to implement intentional outreach in a community and robust programming for serious artists. Wassaic fosters an eclectic community of local rural residents, big-city visitors, and international artists all living in creative community. This idea of artists in residence is a concept Caldwell wants to replicate in Chattanooga.

“To a lot of people, art is what hangs over your couch,” she says. “Chattanooga definitely has a creative ethos, but it doesn’t have a robust contemporary art scene just yet. I want aggressive programming to surround the curated exhibitions. It’s all about driving an idea and bringing people into the fold—creating conversation around a particular theme or social issue.”

The largest portion of the Stove Works property will serve as the home of the nonprofit—the driver and the identity of the project. A Stove Works residency, once fully realized, will allow young artists from around the country—and the world, for that matter—to apply and be part of this community experience. Participating artists will be required to live on-site for one to three months in a private studio with a workspace attached. The essence of the nonprofit is its community-building nature.

“Time, space, resources, community, and play are essential to artists-in-residence programs,” Caldwell says. “Collaborations are born from that type of community experience.”

Once the symbiotic community is created within the walls of Stove Works, Caldwell plans to open up the studios and share the artists’ process and practice. Once or twice each month, Stove Works will have open studios and allow community members to walk through and observe artists while they create.

“Artists bring so much to a community,” Caldwell says. “Part of what will lower this barrier to entry is that our community will be able to see artists in their process. I want to beat back the idea that art is precious. It’s clumsy, messy, and riddled with error. Art is so frequently put on the pedestal. It takes the shape of these white-walled, precious, breakable, expensive objects. It’s all these things—but most of all, it’s perceived as inaccessible. I want to create a space where artists and communities come together to explore tough topics through visual art and break that pedestal together.”

Stove Works eventually plans to build out a retail space with a coffee shop, a restaurant, and a variety of other tenants. A green courtyard space available for community use is also in the plans. For now, though, Caldwell is focusing on laying the groundwork for sharing contemporary art with Chattanooga and its residents. Caldwell and her team recently launched a five-part exhibition series called LAND AND SEA in an interim gallery space across town.

“The current piece confronts border issues and the immigrant experience—the conditions and the stereotypes,” Caldwell says. “It’s an opportunity to pilot the program and familiarize Chattanooga with the type of work we will be showing. Given our social climate right now, we will have artwork that’s worth more than its aesthetic value. We will have art that is driven by a deep and personal need to be valued emotionally. The type of work I want to show will push tough conversations forward.”

Caldwell’s hope is that contemporary art will be accessible and that the site will draw art-goers and soon-to-be-art-goers alike. To stay informed about upcoming shows or to contribute to this project, visit www.stoveworks.org. Phase one of the Stove Works project, the nonprofit artist-in-residence program, is set to launch in summer 2020.