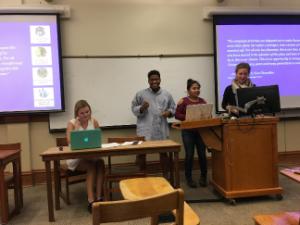 This ambitious project was titled "Stronger, Truer Sewanee: An Intersectional Analysis of Responses to the University's Campaign." Based on Sewanee's current fundraising campaign, whose stated priorities are to make Sewanee "a stronger, truer version of its essential self," this student-led endeavor aimed to open a critical discussion on campus about the official university campaign and its meaning to current students, alumni, and faculty/staff from diverse racial, gendered, sexual, socioeconomic, and religious backgrounds. Launching an online survey and positioning their table at a central spot in McClurg, the group received a very substantial amount of responses (200) to their central questions:

The students explained their purpose in these terms: "Through this direct action project of critically thinking about the 'Stronger, Truer' campaign, we plan to raise awareness of contrasting definitions of what 'stronger' and 'truer' actually mean. We hope to facilitate understanding across difference and unite the community, while making it clear that campus issues involving notions of gender equality, sexuality, and social justice belong to the entire community and are not divorced from our daily lives and activities." 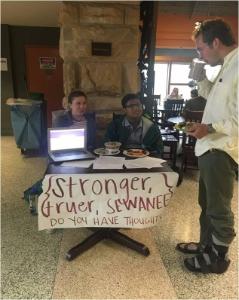 In general, many participants expressed frustration that they were not consulted about the theme of the university's campaign and emphasized that these issues should belong to all of us. Results also varied substantially based on the participant's background, and in their analysis of their data, the team took an intersectional approach based on Andrea Smith's "three pillars of white supremacy." In their analysis of responses by gender, for example, the group noted that whereas straight, white, middle-class cis men tended to interpret the "stronger, truer" slogans in terms of infrastructure, money, tradition, and the need for transparency in the administration; women, racial, sexual and gender minorities highlighted the need for the administration to focus on diversity, activism, and building community. Racial and ethnic minorities often emphasized the university's historic marginalization of people of color, demonstrating their very different perspectives on the campaign and the individuals it overlooks. 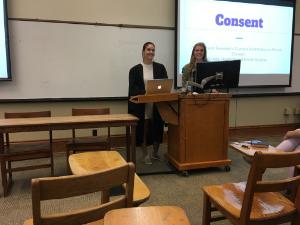 Emma and Allie's project was entitled "Consent: A Look Inside Sewanee's Campus Awareness on Sexual Consent." In order to both draw attention to the issue on campus during Sexual Assault Awareness Month and to prompt a deeper discussion among students about how individual and gendered interpretations of consent differ even in our small community, they undertook a number of initiatives. Their "Pop the Question, Get Consent" project involved creating a keychain bottle opener with this message printed on the face and asking all Greek organizations as well as local stores to buy large batches of them to be distributed to all Greek members and customers during Spring Party Weekend. Intended to encourage discussion about this issue between sexual partners and to emphasize the importance of applying the affirmative consent standard to all colleges and universities, "Pop the Question" was broadly supported by every Greek organization on campus. All proceeds from the keychains were donated to the Chattanooga Rape Crisis Center. Our campus newspaper, the Sewanee Purple, published two articles about Emma and Allie's endeavor in its issue of that week. See, e.g., https://thesewaneepurple.org/2017/04/27/students-promote-sexual-assault-awareness-month/.

‌‌The second phase of their undertaking involved generating a campus survey on consent in order to collect evidence on how Sewanee students understood the concept and how they applied it to their own sexual experiences. Emma and Allie's findings suggest that while many students reported awareness of the definition of affirmative consent, a large portion of them felt that this ideal did not often translate into practice in their personal lives. Their survey results also revealed disparate experiences based on gender. A fairly large portion of female respondents felt that many male students at Sewanee did not respect their personal boundaries when it came to consensual sexual relations. 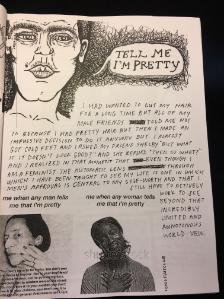 As a member of the student-led Women's Center, or Wick, during the 2016-17 school year, Martha opted for an individual activist project for her feminist-in-action assignment. 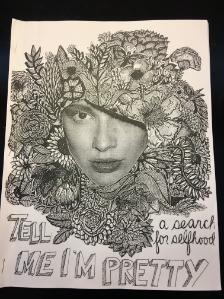 Conceptualizing and executing a personal zine that she entitled "Tell Me I'm Pretty: A Search for Selfhood," she used a combination of original designs sketched by her and her friends, feminist artwork, and internet memes, along with personal narratives, journal entries, political poetry, and rants as a form of feminist writing to challenge mainstream media's portrayal of femininity and the beauty myth. Explaining her desire to highlight gendered autonomy and the construction of selfhood for this project, she began with a story about why she was initially attracted to feminism and how it allowed her to analyze her own experiences as a woman within a critical framework related to the social, political, and cultural contexts of other women's lives. Highlighting the impact of the commodification and objectification of the female body and women's self-perceptions in social media, she pasted a journal entry from November 2016: "...the personal is the lack of autonomy that comes part and parcel with feminine bodies, for you can rarely ever move about freely, unburdened by the hyperawareness of the body you reside in...the political is the same fear, the same sense that my body does not belong to me, that I can never be sovereign over it." 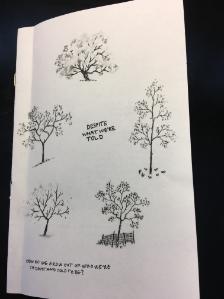 Like Martha, Rachel was an active resident of the Wick during the school year and chose to create a personal zine for this assignment rather than participate in a collective project. Explaining exactly how she chose to apply the noncommercial, feminist, do-it-yourself philosophy of the zine to her self-publication, she made clear that hers was written in a stream-of-consciousness style, that she refused to edit her thoughts or self-censure, and that she deliberately made only a few photocopies of her zine for a small, self-selected audience. 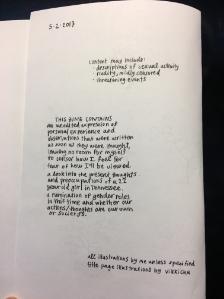 Focusing on the impact of gender norms at Sewanee and in the media on her own perception of her racial, gendered, and sexual identity and her interactions with others, she used the project to question her own internalization of these stereotypes. Asking whether she perpetuates gender roles herself despite her critical stance on femininity and masculinity, she writes in a moment of self-reflection, "I've laughed at a boy for crying about his grandfather's death." On the next page, she wonders whether this did not make her "JUST AS BAD as everyone else for punishing men for feeling." 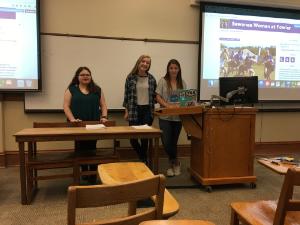 The genesis of this group's project stemmed from Kristy's experience as a member of the female volleyball team at Sewanee and her critique of the Fowler Center as a male-dominated space. As her team worked out at Fowler on a regular basis, she and other female athletes increasingly noticed the smaller allocation of space and equipment to women in the weight room as well as in other locations. Choosing to frame their question broadly around the gendered disparities between male and female sports teams on campus and "the challenges young women face participating in male-dominated spaces such as the Fowler Center, even as non-athletes," the group devised both a blog and a Twitter account dedicated to exploring these issues. Informed by class readings on the Riot Grrrl movement in its appropriation of masculine space for young women at music clubs and on feminist activism centered around the female body in political spaces during Arab Spring as well as the use of social media for political ends, Kristy, Ella and Eva created a survey on women's experience in Fowler that they sent to female students and coaches. They then posted the results of this survey along with national articles addressing the issue of sexism in sports and athletic spaces on their blog and invited others to join the conversation on Twitter:

As the group explains on their blog, "Our goal is to start a wider conversation about issues of sexism and gender inequality through the lens of Sewanee athletics, that in the future can spark productive and progressive changes on campus." 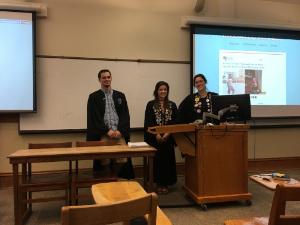 For their project, Alexis, Anne-Stuart, and Ridge decided to create a comprehensive resource blog for the LGBTQIA community living in the U.S. South, which they entitled "Three Queers and a Blog." Pursuing the important work of compiling and sharing legal and cultural resources for each southern state, they additionally created an "In Memoriam" page for individuals in the trans community who were murdered due to their gender identity and/or expression. An activism tab is included on the blog to list details on marches, protests, and actions for allies against discriminatory legislation that would further limit the rights of LGBTQIA folks. Finally, the "Stories" tab features numerous individual narratives about being queer in the South. The group notes that in feminist theory, the LGBTQIA community in the U.S. South continues to be overlooked in favor of a focus on the northern states, and they hope to bring attention to the distinct challenges and experiences of the former. Thinking first about the appropriate medium in which to present their blog, the team chose Tumblr as a site that featured a large, young, queer audience. They used this forum to invite submissions to their blog from LGBTQIA individuals on their own southern queer stories. 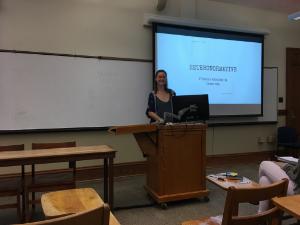 Kathleen served as co-director for the Wick in 2016-17 and chose to do her project in conjunction with the other residents. One of the Sewanee Monologues on the experience of gay men in Sewanee and the perception that being a lesbian was more socially acceptable spurred her thinking about the narrow ways a person could be on the LGBT+ spectrum on campus. Kathleen explained that whereas women in same-sex relationships might gain approval from the mainstream, it was at the expense of being fetishized for one's sexual identity. 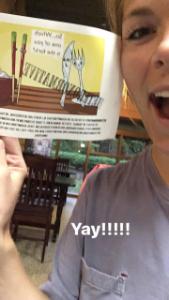 Seeking to illustrate the ways in which the Sewanee community tends to think of gender and sexual orientation in binary terms rather being than on a spectrum, she created a series of cards with images on them that challenged these binaries and were meant to spark conversation among students seated at the tables in McClurg. The images were stamped with the term "heteronormative" on the front and featured captions defining the term. As noted by a few individuals in our class, many students dining in McClurg that day did see and discuss some of the gender and sexual norms presented on the cards. 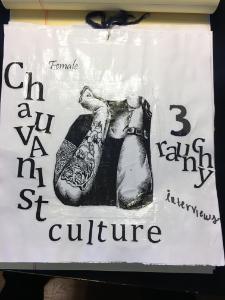 Based on Ariel Levy's book on the negative, neoliberal effects of "raunch culture" on feminism in the 1990s, Female Chauvinist Pigs, Allie created a personal zine that interviews three women on their reactions to raunch culture today. Choosing women of different ages, socioeconomic status, and outlooks on feminism to interview, Allie found that there were generational differences in their views on sexuality. She noted that whereas the oldest woman in her group "expressed a confidence in her sexual encounters," 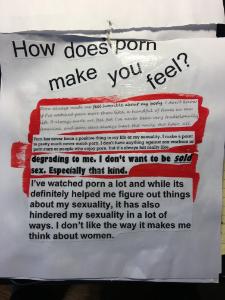 the two women in their twenties had a wider range of sexual experiences, but were "exceedingly unsure about many things." The younger women identified more positively with sex work, suggesting that it could be potentially subversive and progressive, whereas the respondent in her forties identified it as something negative and degrading for women. Allie uses her very small sample to measure some effects of the newer culture of aggressive, male-identified sexuality and objectification promoted by commercial entities on the lives of women today. 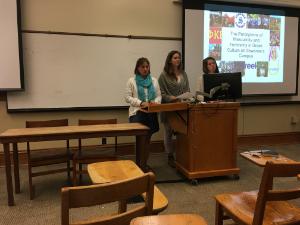 This group focused on the theme of gender roles in Greek culture at Sewanee and in colleges and universities nationwide. At our small college in particular, a large proportion of the student body belongs to a fraternity or sorority. Studies have shown that the Greek system often plays a major role in enforcing gender conformity and promoting the toxic masculinity that fuels a culture of sexual assault on campus. Anna-Sumner, Walker, and Christina produced and edited a video tackling this issue at Sewanee. Interviewing a wide range of students, faculty, and staff (and even Vice Chancellor McCardell) on their thoughts about the impact of the Greek system on gender roles and expectations on our campus, the team sought to spur a broader local discussion about this important national issue.