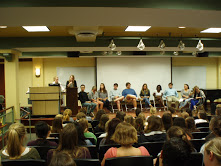 This group created, publicized, and even procured sponsorship for a student-led panel discussion on "Comedy, Gender, and Race at Sewanee." They chose their panelists from a diverse spectrum of the Sewanee student body, and asked them to reflect on issues such as the following: Can a comedian joke about topics like race, gender, and/or sexual assault and at what point do we consider that this person has crossed a line? How important is the audience in determining whether such jokes are funny? How should we react as a community or as individuals to some of the jokes made about these subjects on our local yikyak? What does a mainstream female comedian look like in today's cultural landscape of social media, film, and t.v.? Can comedy serve as a means for feminism to reach a broader audience? 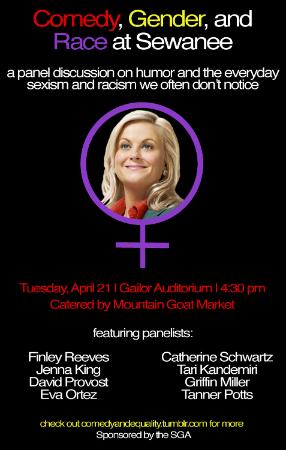 At the conclusion of its discussion, this group asked its audience to consider signing a voluntary pledge: "I pledge to be more conscious when I use and participate in humor, to be mindful of others when I make jokes, and to look beyond the stereotypes made in comedy. I pledge to let others know when they've made what could be a harmful or inappropriate joke when I recognize it. I pledge to read Amy Poehler's memoir and to follow Robert Delaney on Twitter (not obligatory but highly recommended). I pledge to make Sewanee a more positive, open-minded place! YSR & EQB!"

This group's project was entitled "Domestic Violence: Opinions and Beliefs." Forbes, Monahan, and Samociuk's interest in this topic stemmed from classes they took at Sewanee such as WMST 448 and Sherry Hamby's "Psychology of Violence" as well as from Forbes' experience working at a safe house for women who experienced domestic violence. The team posed the following question: Has the recent national and local visibility of feminism and its spotlight on gender-based violence changed attitudes and/or destroyed myths and biases about aggression toward men and women?

The group's goal was to spread awareness and create a conversation about this issue on campus and to ascertain how Sewanee students' attitudes compared to national perspectives. To this end, the team created and analyzed a Buzzfeed survey as well as a campus-wide survey, receiving 185 responses to their campus poll. Additionally, Forbes, Monahan, and Samociuk produced two graffiti boards asking "What does violence against men look like" and "What does violence against women look like?" The group positioned these boards in front of the library and McClurg for two days and received numerous responses. 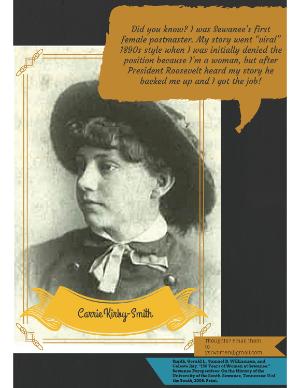 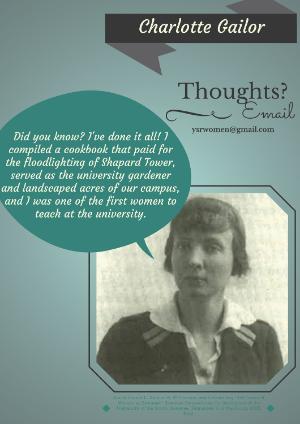 Inspired by the recent campaign Women on 20s, or W20, this team sought to raise awareness on campus about the impact that Sewanee women have made on university space, infrastructure, and history. The group posits that these women's absence from public spaces and buildings on campus signifies a lack of cultural and social capital for women generally. As the students explained in their presentation: "We feel that there is a general lack of knowledge that women had vital roles in what we know today as Sewanee. We want to dispel the belief that the university started out as a 'boys club' by finding out about the women who helped make this university a reality."

‌The students combed through the university archives with the assumption that women did not donate substantially to the school but quickly found that they were mistaken. Women made extensive financial contributions to Sewanee, and often at critical times in its history. The team designed posters based on six Sewanee women who made a difference on campus and posted them in the buildings to which these women were connected. The group asked for feedback from students who viewed the posters and it analyzed these responses in its presentation. 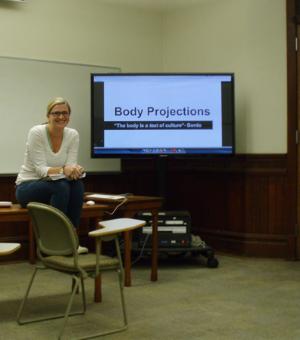 Alli Smith completed her own project entitled "Body Project(ions)" with an accompanying blog. She framed her approach with Susan Bordo's argument in Unbearable Weight that "the body is a text of culture." Building on her experiences in Full Embodiment: An Empowering Dialogue (FEED) and the Women's Center, Alli launched a body-drawing exercise among a number of women students on campus. Providing participants with a blank piece of paper, she invited them to "draw your body from memory, as you see it," and to "write down any additional commentary, thoughts, or notes as you draw." She then posted her fascinating results on her blog. Noting that many female students exaggerated areas of their bodies with which they were dissatisfied and focused on body parts that were objects of the male gaze, Alli demonstrated the ways we often internalize destructive cultural messages about our physical appearance and play a role in perpetuating body myths of the dominant culture. 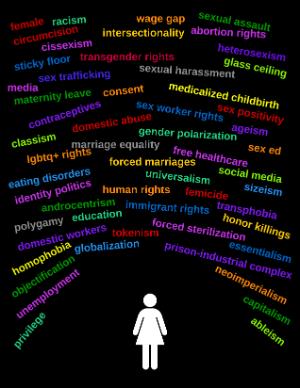 Sarah and Michelle conceived of their zine as a more intimate, alternative space to the Bairnwick Women's Center, where they served as co-directors of a student collective that organizes and executes activist programming throughout the year. Their role as Women’s Center leaders required them to serve as the public faces of organized feminism on campus, and to defend their programming and even their individual choices from multiple critics inside and outside of the college. 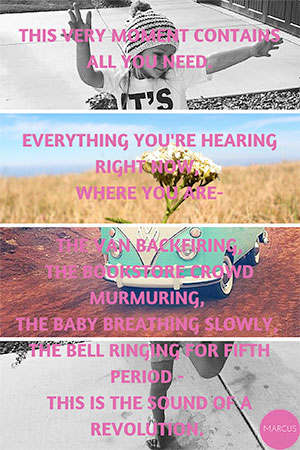 This zine was their attempt to deconstruct this experience and to remove the self-censorship that often kept them from expressing their personal beliefs and opinions in this institutionalized role. In true riot grrrl spirit, they express their own feminist voices in an unabashed and unapologetic fashion in their zine, revealing their individual strengths and their vulnerabilities at the same time. As they explain in their manifesto that ends the zine: “I’m not sorry...Because two years ago, there was no 'crisis response team.' Because half the time I am the crisis response team...Because you see my face, my co-director, but you don't see me. You don't know me. But you blame me. Because I can't say any of this anywhere else. Can I even say it here. Because you run from my words, when I've risen to yours."

Because this zine was created in the spirit of an underground tract and was not intended for a general audience or even for the university as a whole, Michelle and Sarah wish to share only a few pages here.