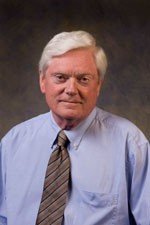 Thomas Carlson graduated from Sewanee in 1963, received his M.A. and Ph.D degrees at The University of North Carolina, Chapel Hill, and returned to The University of The South in 1970 to teach English and American literature. His upper level courses focus on 20th and 21st century American fiction.

Carlson has taught courses on Anglo-Irish literature, modern British poetry, and American studies, a program that he chaired from 1977 to 1990.  His primary field of concentration has been American literature, especially the literature of the American South about which he has written extensively.