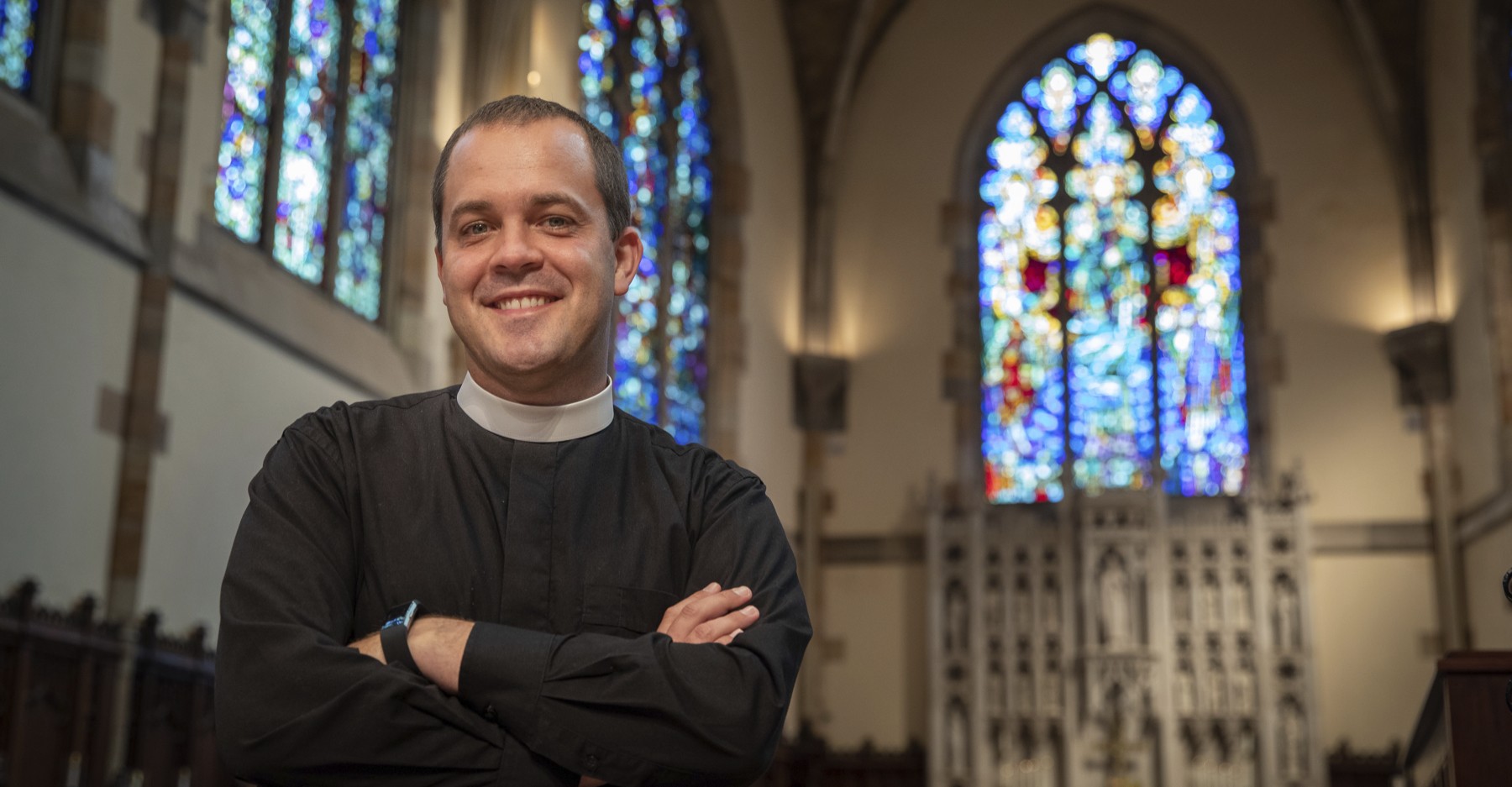 New University Chaplain Peter Gray starts his dream job with a host of challenges, a family history of activism, and a desire to “make a space for everybody.”

Last July, on a train from Oslo, Norway, to Bergen, the Rev. Peter Gray couldn’t help but notice how the European landscape reminded him of Sewanee. And Sewanee made him think of family and the summers he spent in Sewanee as a child visiting his grandparents, the Rt. Rev. Duncan M. Gray Jr. and his wife, Ruth. Gray was on clergy sabbatical and traveling through Europe with his wife, the Rev. Giulianna Gray, and their two children. Later, watching his kids play in Bergen, Gray thought to himself, “I wonder what I’m supposed to be doing?” It was just the sort of question a sabbatical makes room for, and for Gray, the beginning of an answer, too.

He thought of the Sewanee chaplaincy and the uniqueness of the position—one that blends traditional pastoral work within an academic environment. It was a combination he’d dreamed about since becoming an ordained priest in 2008, but it wasn’t a direction his work had taken him so far. That night, scrolling through job postings online, a new listing caught his eye. It had just gone up that day: University chaplain at Sewanee.

Less than a year later, the Oxford, Mississippi, native would be stepping not only into his dream position but also one of the most challenging times the University—and the world—has ever seen. Between a global pandemic and a national reckoning around racial injustice, the stakes were high. But in many ways, this is what a priest prepares for. Gray was ready.

The Episcopal priesthood is in Gray’s blood, and the same could be said of his commitment to fighting racial injustice.

“I think it is safe to say that you don’t get by in my family without engaging issues of race and racism seriously,” he says, adding, “which is not to say we are perfect but it is to say that it weighs heavy on our conscience.”

Gray’s grandfather, Duncan Gray Jr., who graduated from Sewanee’s School of Theology and served as chancellor of the University, advocated for racial equality throughout his career, beginning with his time at Sewanee. In 1953, during his senior year, the University’s Board of Trustees voted against integrating the School of Theology. Duncan Jr. was the seminary’s student body president and a witness to the uprising within the school as all but one School of Theology faculty member resigned in protest. The decision was overturned a few months later. The experience stayed with Duncan Jr.

Nearly a decade later, in 1962, while serving as rector of St. Peter’s Church in Oxford, Duncan Jr. found himself in the middle of another uprising. This one, however, would end violently.

White residents gathered at the University of Mississippi to protest the school’s decision to admit its first Black student, James Meredith. Duncan Gray Jr. was called to calm the crowd. He climbed on top of a Confederate monument asking the crowd to peacefully disperse. Instead, protestors grabbed the priest and his fellow supporters and beat them. Campus police arrived and intervened, but later that night, two civilians would die as fights continued to break out.

Throughout his career, Duncan Jr. advocated for racial equality, paving the way for Duncan III to continue his efforts as a parish priest and later when he became bishop. Peter Gray’s father was known for keeping issues of race and reconciliation top of mind in the diocese, advocating for the church to take greater responsibility in the push toward equality.

But equal to the influence of his father and grandfather is that of Gray’s mother, Kathy, who also instilled in him a drive to advocate for others who find themselves outside the majority.

“My mother for most of her professional career did English-as-a-second-language work, and like all ESL teachers, she was part language teacher and part social worker and advocate,” says Gray. “I’ve been reflecting on that experience of who she is and how that influenced me as I engage in my work [at Sewanee]—as somebody whose job it is not just to work with and care for Christians, much less Episcopal Christians, but also work with the Interfaith Council and other groups to say, ‘Alright, how do we make a space for everybody?’”

Making a space for everybody has never felt more important than this moment. Less than a month after being elected chaplain at Sewanee, COVID-19 unleashed itself on the United States, driving communities into their homes and away from one another. And just three weeks before Gray officially took over for the outgoing chaplain, the Very Rev. Thomas E. Macfie Jr., the murder of George Floyd set in motion a wave of antiracism protests and demands for justice. It wasn’t lost on Gray that his first sermon as the new chaplain would fall just one day after Juneteenth, the national holiday celebrating the end of slavery in the United States.

“My own personal commitments around antiracism just have a way of bubbling up, especially in contexts as acute as the one in which we are currently living,” says Gray. “Sometimes the Sunday sermon is the place to do that reflection.”

The reading the week of Gray’s first sermon came from Genesis 21: 8–21. In it, Abraham’s wife Sarah banishes their slave Hagar and her child Ishmael, one of Abraham’s sons, to the desert. Hagar and Ishmael wander hopelessly until God appears and saves them.

Hagar’s story, for Gray, is about telling hard truths, which means not leaving out the parts that tarnish an image. The Bible, he shared in his sermon that day, could have left out the part where Abraham and Sarah enslave Hagar and then banish her and Abraham’s son. But it stayed.

“‘Tell the whole truth,’ this bit of Scripture is saying,” Gray preached. To an empty All Saints’, sending his sermon out virtually, he added, “The whole truth is that for as many good gifts as we receive from our ancestors, there are also failures that we hope not to repeat. But to choose a different path, we’ve got to be willing to admit when the wrong path’s been taken.”

As the new chaplain, Gray’s aim toward movement along a different path is threefold: worship, welcome, and partner.

“I understand it to be part of my role as a leader of worship to be intentional about how that worship is available to everybody,” he shares. “And I also understand in this moment that if I’m not speaking from the pulpit to the realities of the world then I am communicating irrelevance.”

Gray admits that in the age of COVID-19, creating and maintaining fellowship and connection is a challenge. Not only do the times call for greater inclusivity and accessibility but also for greater caution and care.

“We are in the trial-and-error phase. Everything takes more effort. Some things work and some things don’t,” he says. Because people can’t pass the peace with a hug or handshake, Gray encourages congregants to take a moment and look their neighbor in the eye and smile. Instead of a large choir, the chapel has small ensembles or a solo performer. Something that didn’t work? Hand sanitizer stations before communion. The sanitizer was slow to absorb and everyone ended up with wet wafers. Gray nixed the stations.

Just like for his parents and grandparents, there is a drive to foster community in everything Gray does. And the reality of how difficult that can be, especially now, is a constant in his mind.

“The challenge of being a relevant and contemporary preacher and pastor is to figure out how to both tend to relationships and keep communication channels open, and also not shy away from difficult stuff,” he says. “That is quite difficult.”

As Gray settles into his new role, he finds each day different from the last. For a priest, the daily changing needs of a community are nothing new. In the day-to-day, he sees his job as an intersection between student engagement, student programming, and working with the vice- chancellor and his administrative team. But it’s bigger than that, too.