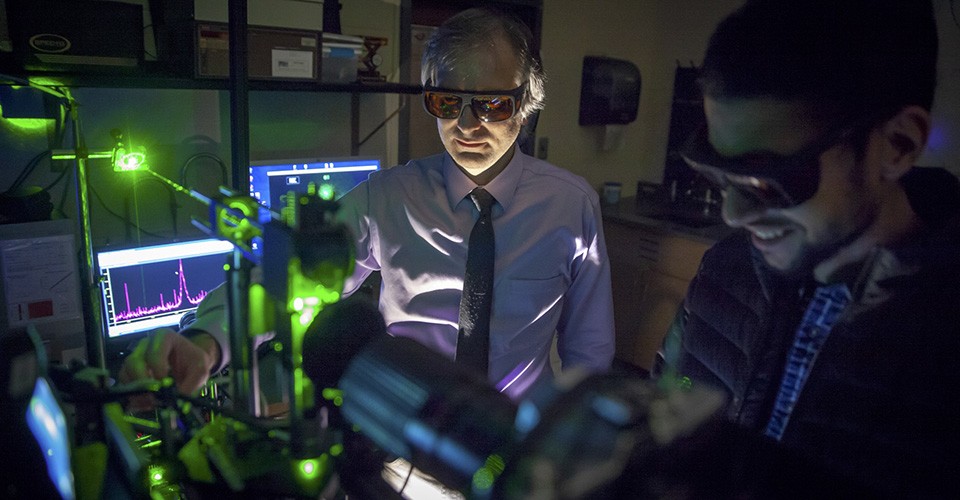 Eugenii Donev and Alaa Adel Abdelhamid, C'22, use the lab's Raman microspectrometer to examine a sample of graphene.

A Sewanee physics professor and his students study nature’s tiny building blocks with painstaking care and a healthy dose of ingenuity.

Eugenii Donev (Евгений Донев in his native Bulgarian), C’03, an assistant professor in the University’s Department of Physics and Astronomy, is fascinated by small things. How small? How about things that are so small that they can’t be seen with a microscope, at least not a normal microscope. He’s a scholar of what’s called the nanoscale, a strange level of matter that is, for all practical purposes, zero-, one-, or two-dimensional. It’s a place where the size of materials scientists are working with is molecular—smaller than cells, but bigger than atoms.

Over the past five years, Donev and a continuing stream of his students have put together the tools needed to make and study the properties of many substances at the nanoscale. In the process, he’s taught his students about the building blocks of nature and the complex intellectual challenges and skills that make up experimental physics.

One example of nanoscale matter that Donev and his students are working with is graphene. Graphene is born of the same graphite that’s in a lead pencil, but with the thickness of a single carbon atom. A sheet of one-atom-thick graphene is transparent, like plastic wrap, but hundreds of times stronger than steel. The two physicists who discovered how to produce graphene shared the 2010 Nobel Prize, and graphene appears poised to become a key to everything from building tiny computers to super high-efficiency batteries.

One of the tools Donev and his students needed to study the nanoscale materials they were producing in the lab was an instrument known as a Raman microspectrometer, which probes the structure of molecular and crystalline materials by bouncing a tightly focused laser beam off the surface and detecting the minute shifts in the energy of the scattered light. Buying one “off the shelf” might well cost about $80,000.

Instead, Donev and students Ahsanul Kabir, C’20, and Daniel Rosales Girón, C’17, put together their own micro-Raman system using parts donated by Vanderbilt University or bought as discounted demo units from commercial vendors. Donev says the total cost was probably about $8,000.

Other students, among them Tyler Blankenship, C’18, further customized this home-built Raman microscope to study sheets of graphene under Donev’s tutelage.

“Building the Raman spectroscopy apparatus for the characterization of graphene at Sewanee was the first time I was ever really exposed to the research process and how it can be compelling, frustrating, and incredibly rewarding simultaneously,” Blankenship says. “I think it’s fair to say that without the work I did in Dr. Donev's lab, I would have never made the decision to try to pursue physics research as a career by going to graduate school.”

Students' work with Donev's research is not a required part of the department’s formal curriculum, and students take on their own research in addition to completing the formal requirements of the physics major. More often than not, however, the research they do in Donev’s lab naturally carries over to the required Physics Seminar courses, “trials by fire” of sorts, for which every junior and senior majoring in physics must undertake a hands-on research project of their own interest.

For his students, the aim is “to equip undergraduates with advanced tools and techniques that systematically build the necessary skills for them to engage in—and ultimately ‘own’—any complex, multistep research process.”

Donev calls his continuing project a “hybrid,” with intersecting research and educational goals. As a researcher, Donev has been studying two different forms of nanoscale matter—particles and grid-like arrays (lattices with tiny holes)—as a means of greatly enhancing the amount of Raman signal (and hence the molecular “fingerprint” of the analyzed materials) that can be recovered from the inherently weak Raman light scattering process.

Donev’s research has led to a steady stream of peer-reviewed publications starting even before he earned his doctorate. He is currently the principal investigator of two nanoscience research projects approved under the user program of the Center for Nanophase Materials Sciences at Oak Ridge National Laboratory. There he takes advantage of top-tier research facilities and expertise to study the “small is different” effects that emerge when light shines on nanoscale particles and holes of vanadium dioxide—another deceptively simple material, like graphene, that brims with rich physics and promising applications (for example, ultrafast light switches for the optical computers of the not-so-distant future).

One of the great attractions of studying materials at the nanoscale, Donev says, is the unexpected ways that matter behaves. “You couldn’t predict these things,” he says with a wry grin.

The term for these unexpected behaviors is known throughout the sciences as “emergence.” At larger scales, emergent properties are generally observed in complex systems, but changes in behavior can also be found by looking at smaller and smaller scale, too.

Donev’s major academic research interest centers on how light interacts with nanoscale matter. Just as with quantum physics, where light itself can appear to be either a particle or a wave, depending on how it’s observed, everyday materials like graphite take on wholly different properties when reduced in size and dimensionality.

To make the point, Donev often shows visitors to his office a vial of clear red liquid. What is it? The surprising answer is that it’s a suspension of nanoparticles of gold, proving that while Shakespeare was correct in saying that “all that glisters is not gold,” the obverse is also true.

Both Rosales and Blankenship are currently enrolled in doctoral programs, Rosales at Florida State and Blankenship at Vanderbilt, the same institution where Donev earned his doctorate. Both students say that working with Donev gave them their first chance to combine scholarship, discipline, and skills that turned them into high-level scholars.

Rosales says he learned vital lessons from working with Donev on nanoscale research: “It requires an inordinate attention to detail; when creating structures one-thousandth the size of a human hair even the smallest perturbations can make or break an experiment. Dr. Donev made sure we had the organization, tidiness, and discipline to do research-grade work.”

When he walked me through the complex steps required to create nanoscale materials, the experience was a combination of the mundane (preparing the substrates to deposit the nanoparticles was a nerve-wracking but tedious process), and the often frustrating (examining the finished product using Raman spectroscopy and finding that something had gone wrong somewhere, but not having the tools on hand to find out exactly what).

For Donev, this is the real goal of his work with students.

“These skills you learn will get you noticed,” he says. “But they’re not job skills.” Donev calls the lab work a form of training in “meta skills.”

The students are learning how to work with things they can’t see, but can measure. “You’ve got to learn the science and practice the art of experimental physics; then iterate,” he says. “Doing experimental research requires perseverance, being systematic and keeping a curious eye out for unexpected effects.”