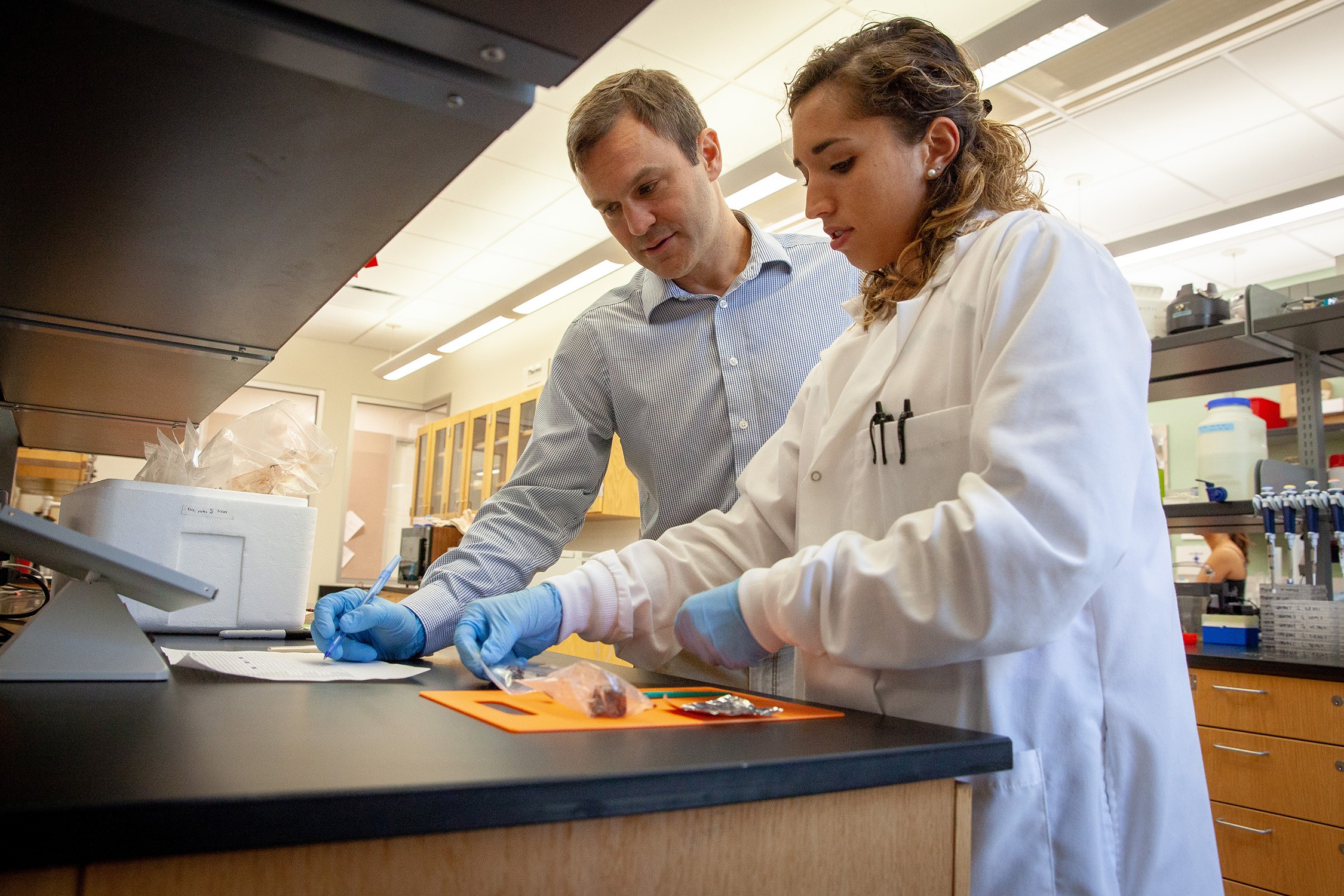 Blood in the Water

A Sewanee professor’s newly published book explores the sustainability of two Atlantic whale-hunting cultures while his collaborative research with students yields significant findings and a tissue-for-internships arrangement with other universities.

In 2001, while backpacking through Iceland after recently completing his undergraduate degree at the University of Florida, Russell Fielding stumbled across a festival in Ólafsvík, a small town on the far western tip of the island, which was in the midst of an annual celebration of the culture of the Faroe Islands.

In particular, the festival commemorated something called the grindadráp, a traditional form of whale hunting that had been practiced in the Faroes for centuries.

That chance encounter eventually led him to his research topic for his doctoral dissertation, and now, 17 years later, to the publication of a fascinating study of traditional whale hunting cultures in the Faroes and in St. Vincent and the Grenadines, a tiny island nation in the Lesser Antilles, where the Caribbean Sea meets the Atlantic Ocean.

The Wake of the Whale: Hunter Societies in the Caribbean and North Atlantic is part history, part geography, and part science (with excursions into ethnography and personal narrative).

Fielding, an assistant professor of environmental studies at Sewanee, acknowledges that both the practices he documents and his participant-observer approach to his research are sure to stir strong reactions.

Early in the book, Fielding issues a warning:

“Some of the narrative and images may be disturbing, especially to readers who—like me—love the natural world in general, the ocean more specifically, and whales and dolphins with an affection most particular of all.”

For many Americans—from Baby Boomers who grew up watching the television series “Flipper” about a pet dolphin, to the generations of children who have visited the three SeaWorld attractions in Orlando, San Diego, and San Antonio—the idea of hunting cetaceans is shocking and offensive. That’s not the view in either of the two traditional whaling cultures Fielding studied.

In the Faroes—an archipelago about halfway between Iceland and Scotland—small-scale whaling using small boats to drive pods of pilot whales to beaches, where they are killed and butchered, has been a traditional source of protein for hundreds, or, more likely, thousands, of years.

That’s not surprising because the islands are sub-polar, so there’s very little farming, and the local diet depends heavily on mutton, fish, and other seafood. Whaling in the Faroes is opportunistic—a grindadráp requires a sighting, and weather conditions may not even allow the small boats to head out to sea.

Faroe whaling is also communal: there’s no commercial industry, and when news of a grindadráp spreads, people rush to the spot where the whales are beached to take part in the killing and butchering. Even those who do not participate in the grindadráp are entitled to a share of the meat and blubber.

As Fielding points out, there’s a shocking side to the grindadráp: the name itself comes from two words, grind (a pod of pilot whales) and dráp (slaughter).

In one of the most graphic—and potentially disturbing—passages in the book, he tells about the experience of a group of students from the University of Denver (where he was then teaching) during a 2012 field course in environmental geography in the Faroes. Suddenly, he received a series of text messages alerting him to a whale sighting.

After a ride on an interisland ferry, the group arrived at the beach where the grindadráp was about to commence. In short order, the whales were dragged to the beach.

“When the whale’s head rested on the sand, a man withdrew a knife from a wooden sheath tied around his waist and sawed into its flesh. The blood came immediately. Great spurts, truly thicker than water, erupted as the whale went into its final spasm—the knife having just severed its spinal column.... The seawater turned red.”

The reactions of his students varied. Some stood on the shoreline taking photos. Two had joined the teams hauling the whales to shore. Two others had disappeared into the nearby town to avoid the scene.

Whaling in the Caribbean is different. Whaling there is historically an American import. “It’s a direct descendant of the Moby-Dick era,” Fielding says, “the last relic of Yankee whaling.”

Even though Moby-Dick, Herman Melville’s 1851 epic novel of Captain Ahab and his ruinous effort to take revenge on the whale that had bitten off his leg in a previous encounter, may well have the most famous first line in American literature—“Call me Ishmael”—the  early emergence of America as a whaling nation is largely forgotten.

As early as the 1770s, Yankee whalers were producing an estimated 45,000 barrels of sperm whale oil, which was used for everything from illumination to a lubricant for the gears of the Industrial Revolution, and by the 1830s, the United States was the preeminent whaling nation in the world.

Among the many strands of narrative in The Wake of the Whale is Fielding’s recounting of how New England’s highly profitable whaling dominance created a local whaling tradition in the Caribbean.

For years, the American whaling fleet hunted the Caribbean, but as they depleted whale populations New Englanders became less interested in signing on as crew because the crew’s share of the return on the catch was growing smaller. So, the American whaling vessels began recruiting crews from the West Indies. Across the islands, local men learned the craft of whaling.

As American whaling died out in the Caribbean, these same men turned their new skills into an indigenous operation.

Even though St. Vincent was not a major center of Yankee whaling, the local men who learned the skills of whaling were particularly ambitious in starting local whaling operations.

The more famous traditional whaling is based on the island of Bequia—a small island just south of St. Vincent—and Bequia became the hub for spreading whaling across the Caribbean. While whaling has died out in most of the region, the Bequian tradition is the reason that St. Vincent and the Grenadines is the only Caribbean nation with an internationally sanctioned catch of up to four humpback whales a year.

On the bigger island of St. Vincent, whaling is confined to one town, Barrouallie, and the whalers make up only about a thousandth of the country’s population, according to Fielding.

In Barrouallie, the catch is smaller cetaceans, mainly pilot whales and dolphins, collectively known locally as “blackfish.” And given the scarcity of humpbacks, blackfish are the most viable and reliable commercial catch. And while the butchering of the whales is done on shore, the killing takes place at sea.

Since arriving at Sewanee in 2014, Fielding has drawn many of his students into active participation in research on Vincentian whaling.

This past summer, a team of 10 students conducted about 900 interviews in St. Vincent and the Grenadines to learn about attitudes toward whaling, the consumption of whale meat and blubber, and significance of blackfish in Vincentian culture and cuisine. Fieldings says he believes this summer’s field work alone may yield up to five papers, and Sewanee students will be coauthors of at least some of them. The research will also inform the Vincentian Ministry of Health’s development of dietary recommendations, which will be able to target the populations most at risk of mercury exposure.

Fielding has also put the students to work in laboratory research using tissue samples that were collected in 2015 and 2016 by Fielding, two Sewanee students, and collaborators from the University of the West Indies in Barbados and Ross University, located in St. Kitts. Sewanee, with its mountaintop campus in a landlocked state, is the unlikely repository for much of this tissue collection.

It’s almost impossible under current laws and treaties to ship whale tissue into the United States, so getting the necessary permits to bring the tissue into the country was arduous and frustrating, Fielding says. And the actual arrival of the tissue was almost furtive.

The tissue is now stored in freezers at a couple of locations on campus, and because Sewanee doesn’t have the full set of laboratory facilities for complete analysis of the tissue, Fielding has turned some of the samples into a sort of scientific wampum, offering tissue specimens to marine research labs across the United States in return for research assistantships for Sewanee students. (Because of the difficulty of importing samples, the tissue is in high demand among U.S.-based researchers who want to use them in their own analyses.)

The trade has netted eight research assistantships. Based on the amount of tissue traded, the price of an internship is about two ounces of whale tissue. And the freezers are still relatively full.

Other Sewanee students are working with Fielding on research in the Sewanee labs. This semester, they are working on new methods of preparing samples for testing and an experimental method for reducing the contaminant load in whale meat.

Will aboriginal whaling last? Fielding writes about repeated predictions that the traditions would die soon. But if the end of whaling comes to the Faroes and St. Vincent, the reason is likely to be scientific, not cultural.

As early as 1977, researchers had discovered that the whale meat and blubber being consumed in the Faroes was contaminated with high levels of mercury, and doctors began to warn about the consumption of whale.

Similarly, Fielding, his collaborators, and students have detected mercury toxicity in blackfish caught in St. Vincent. And, says Fielding, the origin of the contamination seems clear: The biggest source is most likely the burning of hydrocarbons, specifically coal. Fielding points out that both those who would ban whaling altogether and those who love whales but believe that sustainable harvesting is a natural part of the cycle of predation do find themselves united on one point—manmade oceanic pollution is appalling and unacceptable.

“An ocean devoid of whales is just as horrifying, if not more so, to whalers as it is to the anti-whalers,” writes Fielding. “Love and hatred of whaling can both save whales.

“The apathetic, on the other hand, are neither for or against the whales. These are the polluters, the destroyers, the turners of blind eyes, the mindlessly uninvolved. They see the ocean not as a habitat for creatures ... but rather as a sink, a sewer for all that is expelled from their industrial processes.”